Riley Pediatrician is ‘Whirlwind, A Tornado, A Positive Force For Good’

Dr. Marilyn Bull was a pioneer in children’s auto safety. Before car seats were mainstream, she was fighting to get them inside patients’ cars and modifying the seats so children with special needs wouldn’t be left out and in danger.

One baby had died. Two babies had suffered severe and permanent brain damage.

And none of it made sense to Dr. Marilyn Bull.

And then. The senselessness happened.

Each of those babies ended up the innocent victims of car crashes. One died. Two were brain damaged -- three babies in the first three years of Dr. Bull’s career as a developmental pediatrician at Riley.

“And that made absolutely no sense to me at all,” she said. “No sense.”

It all could have been prevented, Dr. Bull thought, if those babies had been sent home in car seats.

Prevention, Dr. Bull realized, was the key. But it was 1979 and car seats weren’t mainstream. Parents argued that they shouldn’t have to restrain their children. People argued it would be too expensive for many families.

But General Motors had debuted its Love Seat a few years back, the first iteration of a car seat for infants. The company had a special deal for physicians, $25 each.

After Dr. Bull earned an honorarium of $100 for speaking about birth defects to the March of Dimes in Richmond, Ind., she came back to Riley with that money and a mission. She persuaded four doctors to sign the forms and buy those Love Seats.

With that, the first car seat loan program was launched in 1980 at Riley. 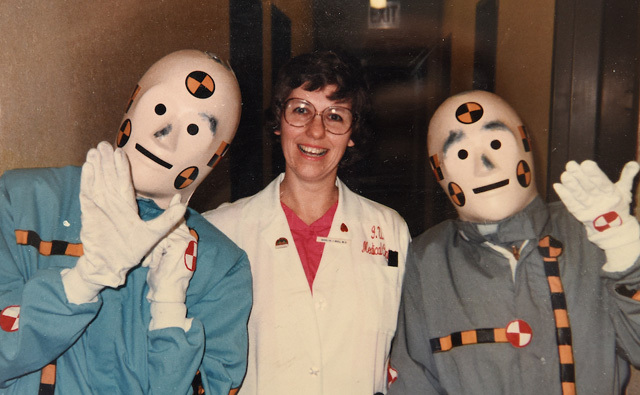 Nearly 40 years later, Dr. Bull is an international name in children’s auto safety. She is the woman credited with starting the first auto safety program at Riley, the woman behind legislation worldwide that requires kids to be safely restrained in cars and the woman who was the first to focus on auto safety for kids with special needs.

She also, in her full-time job, practices as a pediatrician and leads the Down Syndrome program at Riley.

“She’s a whirlwind, a tornado, a positive force for good,” said Karen Bruner Stroup, who worked as research associate from 1983 to 1993 in Dr. Bull’s Automotive Safety for Children Program at Riley. “We were plowing new ground then. And she was at the forefront.”

“If your child had a life-threatening illness and there was a pill that was 50 percent effective, you’d give your child that pill,” Dr. Bull said. “You’d give them the medicine and you wouldn’t even question it.

“We hear you’re interested in car seats and we want to sponsor the law,” they told her. “Will you help us?”

That launched Dr. Bull’s political career in terms of advocating for legislation. She became close to the lawmakers, partnering with them. She faced plenty of pushback from people who didn’t like the idea of government telling them what to do with their children.

And every child. Dr. Bull is known as much for her work fighting for auto safety for  children with special needs as she is anything else.

“Kids who couldn’t sit up in a car seat, people said to put them in cardboard boxes on the floor,” she said. “Wind a seatbelt around them.”

Again, that made no sense to Dr. Bull.

His name was Ross, just a little guy. A little guy who didn’t have much longer to live.

His parents didn’t want him cooped up in the hospital in his final days. They wanted to take him home, let him breathe the fresh air that would blow into the car windows. Let him do things he hadn’t gotten to do in his short life.

But Ross couldn’t sit up, so he couldn’t be buckled into a car seat. He needed to lay flat. It just so happened Dr. Bull had been working on getting a new child restraint system to the hospital, a Swinger car bed. It was made of a strong plastic shell with bunting in the middle that a child could lie in and be strapped safely.

“I’m in my office one day and she calls me and she says, ‘Bring the Swinger down to clinic C,’” Stroup said. “And Ross went home in the Swinger car bed. He passed away, but before he did, they were able to do things with Ross.”

So does the boy in the full body cast who couldn’t bend his legs. Dr. Bull had the carpentry team from occupational therapy cut out the sides of the car seat. She then secured research grants to carry out crash tests.

And there was the tiny kid at Riley with brittle bone disease, or osteogenesis imperfecta. Thanks to Dr. Bull, he went home in a Swinger car bed. On the way home, his car was struck by a semi-truck.

The bed saved his life.

Before Dr. Bull was a doctor fighting for the health and safety of children, she was baking cherry pies.

Dr. Bull grew up on a cherry tree farm in western Michigan. As a girl, she and her little brother sat at a card table set up at the end of the driveway of the farm. There, they would sell tourists cherries, 25 cents a quart.

As she got older, Dr. Bull spent summers toiling in the orchards. But after her freshman year of college, she decided enough was enough.

“I said, ‘You know what? I’m not going to do that anymore. I’m going to get a real job unless you’ll let me make pies,” Dr. Bull said. “And so they did. They let me bake pies.”

That first summer she baked them on the breakfast table, turning out 10 or so a day. Her mom got tired of that pretty quickly and, by the next summer, Dr. Bull had been sent to the basement to bake.

By the third summer, her dad had built an office with a bakery included. Dr. Bull’s efficiency became spectacular. She would work late into the evenings and, on many days, baked as many as 95 pies – in one day.

And that’s how Dr. Bull put herself through medical school – infusing her mother’s secret of lard in the piecrust with the cherries grown on her family’s farm. 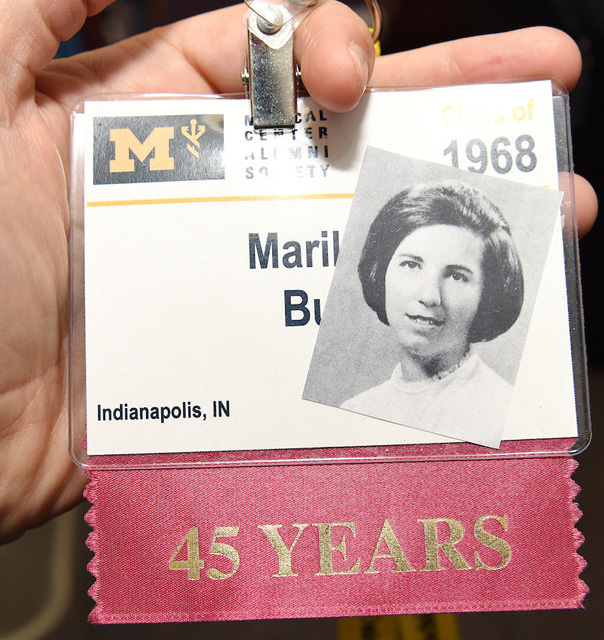 Baking wasn’t her first love, though. Science was. She also loved people. Going to medical school seemed the perfect way to combine the two. Dr. Bull headed off to the University of Michigan in Ann Arbor to do just that in 1964.

Still unsure what specialty she wanted to focus on for her career, Dr. Bull applied as an undifferentiated resident for a rotating internship at Northwestern University in Chicago. And she got it.

She was thrilled to be moving to the big city, but she was nervous about the 33 people who would be in her internship class.

“And the night before my internship started, I dreamed that there were 30 women and three men in the class,” Dr. Bull said. “That is absolutely out of concept, but it does tell you what I was worried about. I had put myself down to the 2 percent range in terms of potential husband candidates. And I was single.”

The next morning when she showed up to her first class, those numbers were reversed. There were 30 men and three women. And one of those men sat next to Dr. Bull and spent the entire morning talking to her. His name was Scott Bruins.

Bull and Bruins, who spent his career as an internist, have been married more than four decades.

She may have been undecided as an undergrad, but once at her internship, Dr. Bull soon found out what she did – and didn’t like in medicine.

Her first weekend on call was the summer of 1968. Dr. Bull was doing her rotation in the emergency department. It was during that weekend when major riots broke out, surrounding the Democratic Convention that was in town. No thanks to emergency, Dr. Bull thought. And then, her next rotation was internal medicine. Also not what she wanted to do.

But in October, Dr. Bull had a rotation at then-named Children’s Memorial Hospital.

“I absolutely loved it,” she said “The chairman actually called me and said, ‘You are a pediatrician. Can we put you in our next year’s class?’”

The answer was yes.

After Chicago, Dr. Bull and her husband moved to Boston where she got a fellowship in birth defects and genetic counseling.  She took her first board in genetics and was recruited to Indianapolis, not for pediatrics but for medical genetics.

But the man at the helm of Riley at the time, Dr. Morris Green, saw Dr. Bull and he saw something he wasn’t going to let go. This woman wasn’t a geneticist. She was a pediatrician.

“He was right,” Dr. Bull said. “He was absolutely right.”

Dr. Bull came to Riley as a developmental pediatrician in 1976, hired to do newborn follow up. And it was in those very first three years of her career that Dr. Bull saw something terrible -- those three healthy babies sent home only to have their lives shattered in car crashes.

Because of Dr. Bull, there is legislation not only nationwide but worldwide that impacts the transportation of kids. She has done work in Israel, Kenya, India, Chile, New Zealand and Australia.

In 2015, the White House, in conjunction with the United States Department of Transportation, named Dr. Bull one of 10 Transportation Champions of Change, a prestigious honor.

It’s not overstating it to say that Dr. Bull played a major part in those numbers. Not only by her own work, but by all those who came after her.

“She’s mentored a whole lot of people over the years, med students, residents, young faculty, the whole range,” said Abby Klemsz, M.D., a developmental pediatrician who was Dr. Bull’s resident. “People who’ve grown up to become – hopefully – like her.”

Editor’s Note: This story is one in a series of Riley milestones that will be featured. To see the complete historical time line, click here.