Pharah rocks a tutu for her last chemo treatment

Four-year-old’s infectious joy spread throughout the halls of Riley during her yearlong cancer journey.

Pharah Paul has the modeling moves down pat. She struts, she tilts her head just so, and she flashes her winning smile for the camera.

Pharah is only 4, but fashion has a friend in her. On this day, she is sporting a colorful hospital gown, and she even does that with flair, especially when she accessorizes with rainbow slippers.

Last year, her “friends in red” put on a fashion show with her as the star, sashaying down the halls of 5 West at Riley Hospital for Children.

Those friends, the Riley nurses, love Pharah for all the joy she brings to the oncology unit at Riley. Everyone wants to be in her orbit.

On Sunday, they said goodbye to their popular patient with appropriate fanfare – noisemakers, cheers and singing. Pharah was rocking a purple light-up tutu and a pink shirt that mapped out her cancer journey since she was diagnosed in January of last year.

The Evansville preschooler finished up treatment for Wilms tumor over the weekend. Wilms tumor is a solid cancerous tumor of the kidney that forms from immature kidney cells. The tumor had metastasized in Pharah, spreading to one lung and her other kidney.

Riley surgeon Dr. Troy Markel removed her right kidney, where the cancer had first taken hold, along with a portion of her left kidney. What followed was radiation and chemotherapy to beat back the cancer.

It’s been a long year for her parents, Craig and Natalie, but the support they’ve received from friends, family and the Riley team has sustained them.

“It kept Natalie and I lifted up,” Craig said. “Obviously, we had our bad times, but everybody around us made it so much easier to cope. I can’t imagine families going through this who don’t have that support system.”

The family, which includes baby sister Charley and a little one on the way, has been consumed with Pharah’s fight, but they have found joy along the way – because that’s who Pharah is.

During her final treatment at Riley last week, her room was across from the playroom on the fifth floor, so she begged to be taken over there.

“It fits me!” she said with glee when she plopped into the tiny chair.

Craig Paul hopes that this is all his daughter remembers about her many trips to Riley – the good times.

“She loves all her friends here. When she’s here, she gets treated like a queen,” he laughed.

Returning to Riley last week for her last inpatient chemo treatment was a full-circle moment for sure, he said. Not the least because her room on 5W was the same room she was in one year ago when her parents were given her diagnosis.

“We were scared to death when this happened,” Craig recalled. “I remember thinking, I’m her dad and I can’t fix this.”

It seems like just yesterday, he said, that he and Natalie were sitting in that same room while Dr. Tyler Severance, Pharah’s oncologist, was explaining the cancer and how they would attack it.

“Stuff like this can tear families apart,” Craig said. “We decided that night that we’re not going to let that happen to us. We’re gonna fight like hell to make sure she gets better, and it has made Natalie and me a lot stronger. We love that Pharah sees that and she can look back at the happy stuff.”

Dr. Severance said seeing Pharah in the room where it all began was a surreal moment for him and the team as well, but he is optimistic about her future, noting that Wilms is a highly curable tumor, and Pharah is now disease-free.

“As a cancer survivor, Pharah has already taken everything we can throw at this,” he said. “She has seen so many types of chemotherapy and surgery and radiation, and she came out the other side smiling and positive as ever.”

While treatment has ended, she will return to the Riley clinic every three months for labs and scans, guarding against not only a return of disease but also any long-term effects from the cancer and resulting therapies, particularly as it relates to her remaining kidney.

“There can be a lot of anxiety with those visits, but Pharah will get her family through whatever needs to be done,” Dr. Severance said.

For now, the Paul family is settling into a new home, with plenty of room for Pharah and her siblings and all of their toys. It’s a new beginning, Craig says. “We can’t wait.”

He and Natalie are grateful for the care their daughter has received at Riley and hope that sharing their story helps other families find light in the darkness.

For his part, Dr. Severance said treating Pharah has been rejuvenating.

“On a busy clinic day, you walk into the room, and she just perks up, smiles and gets excited. She loves to see you,” he said. “You’re happy in those encounters and it carries with you throughout the day.”

And while Pharah and her family have embraced Riley and all it offers, “I would say that Riley is also better because we have known Pharah,” Dr. Severance said.

“On the inpatient side and the clinic side and everybody they’ve met in between, we’re all just better off because we’ve gotten to know her and her family.”

“Hi, I’m Pharah Paul.” This little girl has captured the hearts of her Riley team - A tiny fashionista with a personality to match, who just so happens to have cancer. Oncologist Tyler Severance is among those under her spell: “Everybody is absolutely in love with her.” 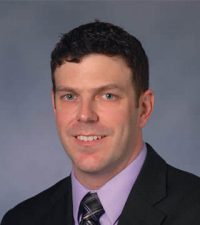