Judi Gibson retired last month after 24 years at Riley Hospital for Children. But she is not leaving behind the program that is so close to her heart – creating beautiful outfits for those precious babies who die.

The tiny, lilac dress is shiny and ruffled and beautiful. It’s so beautiful that it could only be worn by…

And it will be.

Tucked away in a closet inside Riley Hospital for Children at IU Health are more than 200 breathtaking outfits – dresses for baby girls and precious suits for baby boys who have died.

They are outfits created from donated wedding gowns for those babies to be buried in at their funerals.

NICU nurse Judi Gibson helped launch this program, part of the Riley NICU Bereavement Program, which for the past 14 years has been chaired by Gibson.

She retired from Riley last month, but cannot leave behind the program that is so dear to her heart. 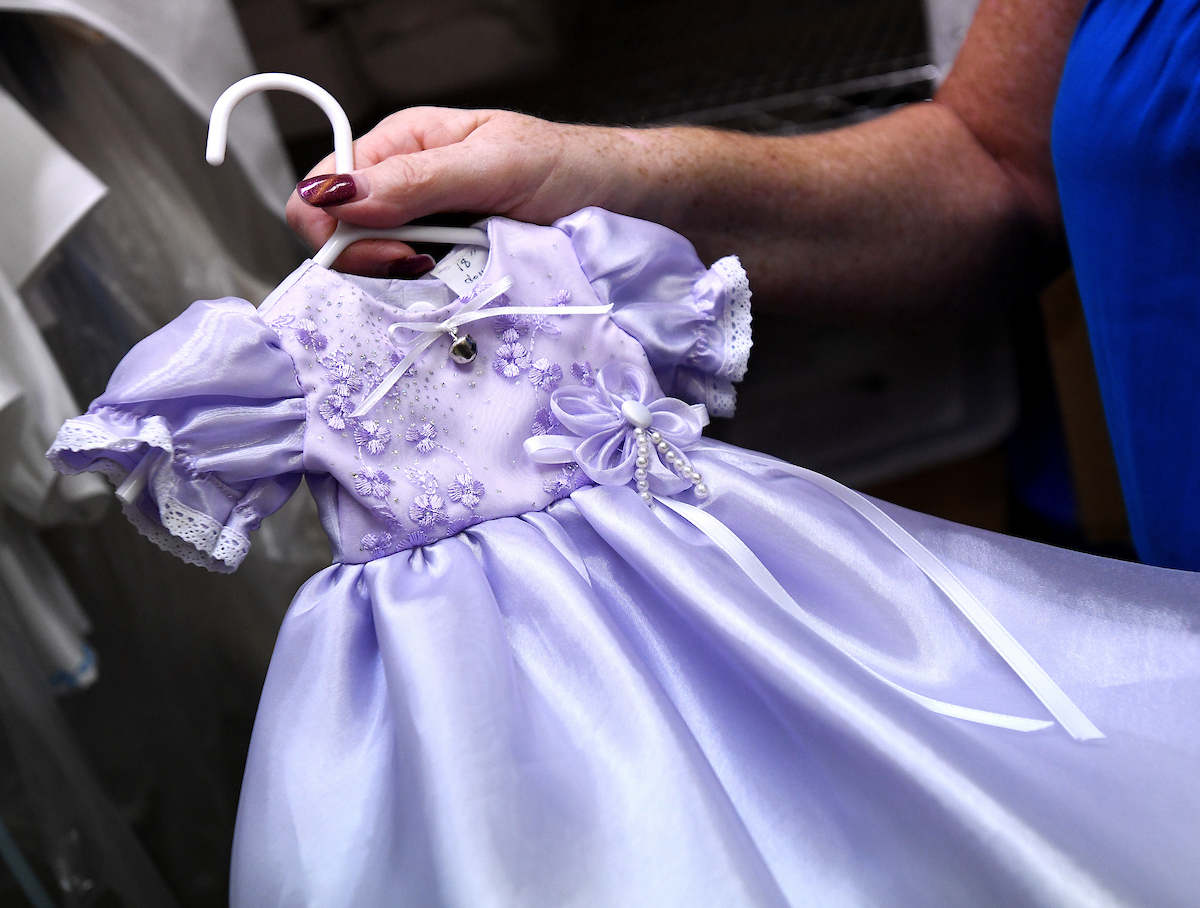 “That baby is always going to be a part of their family,” says Gibson, who came to Riley’s NICU in 1994. “That baby was just as real to them as the baby who survives. They just didn’t get the same amount of time with them.”

She was a manager in the whirlwind industry of fast food, when Gibson got the nudge. This was not what she was meant to do. Her mom reminded Gibson of a letter she had written as a little girl that said she would one day be a nurse.

Gibson, in her early 30s, dropped her restaurant job and went back to school to become a nurse.

After two years working in an adult hospital, Gibson landed her dream job. She had always wanted to work with children. Finally, she got the call from Riley.

And so, it was 24 years ago Gibson walked into the NICU and fell in love. Those sweet sick babies who had remarkable recoveries were incredible.

But those precious babies who didn’t make it. Their wonderful families. Gibson just could not get them off of her mind. She wanted to make sure they felt at peace. 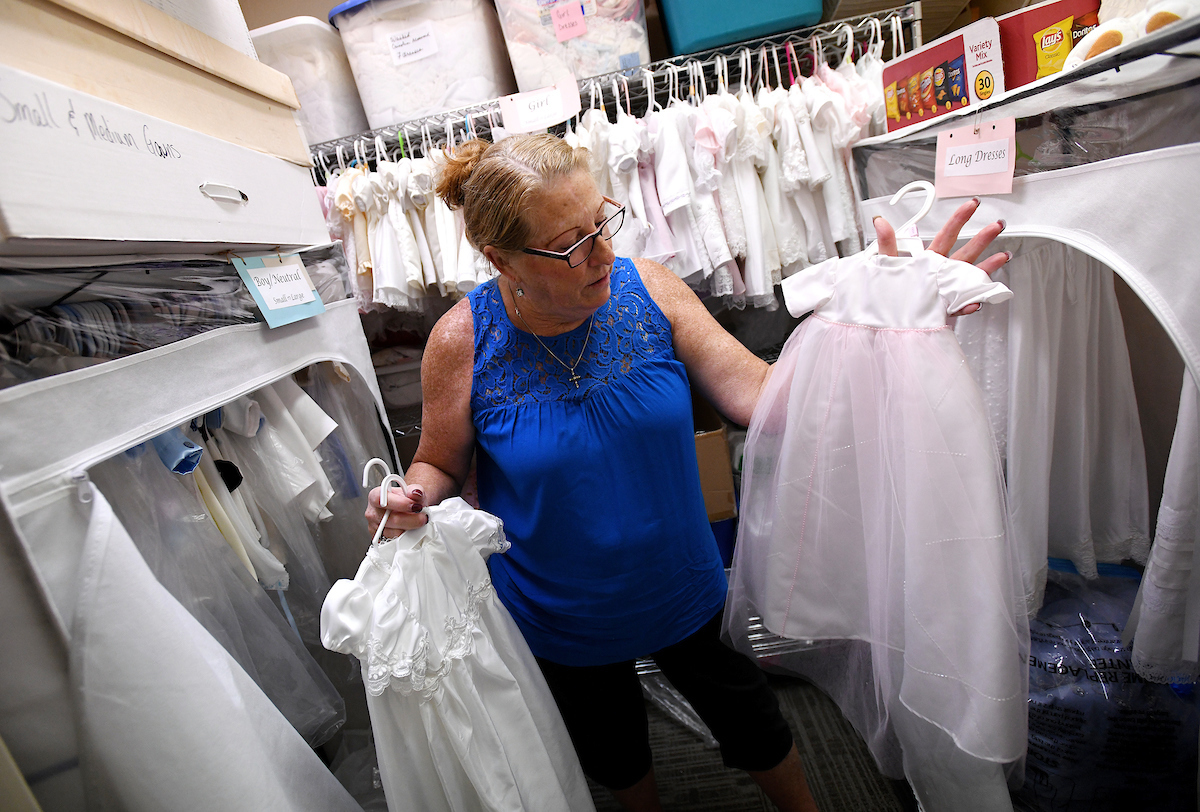 “I think we place a lot of emphasis on families who lose that baby and not enough on that baby being born and its time here,” she says. “I really believe in my heart if you let people know everything was possibly done to save their baby, you can help them through that journey.”

It was a few years ago when a manager in the NICU walked up to Gibson. She showed her a program that collected donated wedding gowns and turned them into burial outfits for babies.

“Do you think we can do this?” she asked Gibson.

Gibson took the idea home to do some soul searching. “I am a Christian,” she says. “I felt very led that this was what I wanted to do.”

Just imagine, she thought, losing a baby and then having to shop for an outfit for your baby.

“That is a parent’s worst nightmare,” Gibson says. “Instead, they could have something that was somebody’s wedding dress that was so loved.”

That night, Gibson posted on Facebook. She wanted to help launch this program at Riley. And then, she sat down to watch a movie with her husband.

Two hours later, she had 10 wedding dresses and a seamstress.

“I couldn’t believe it,” Gibson says. 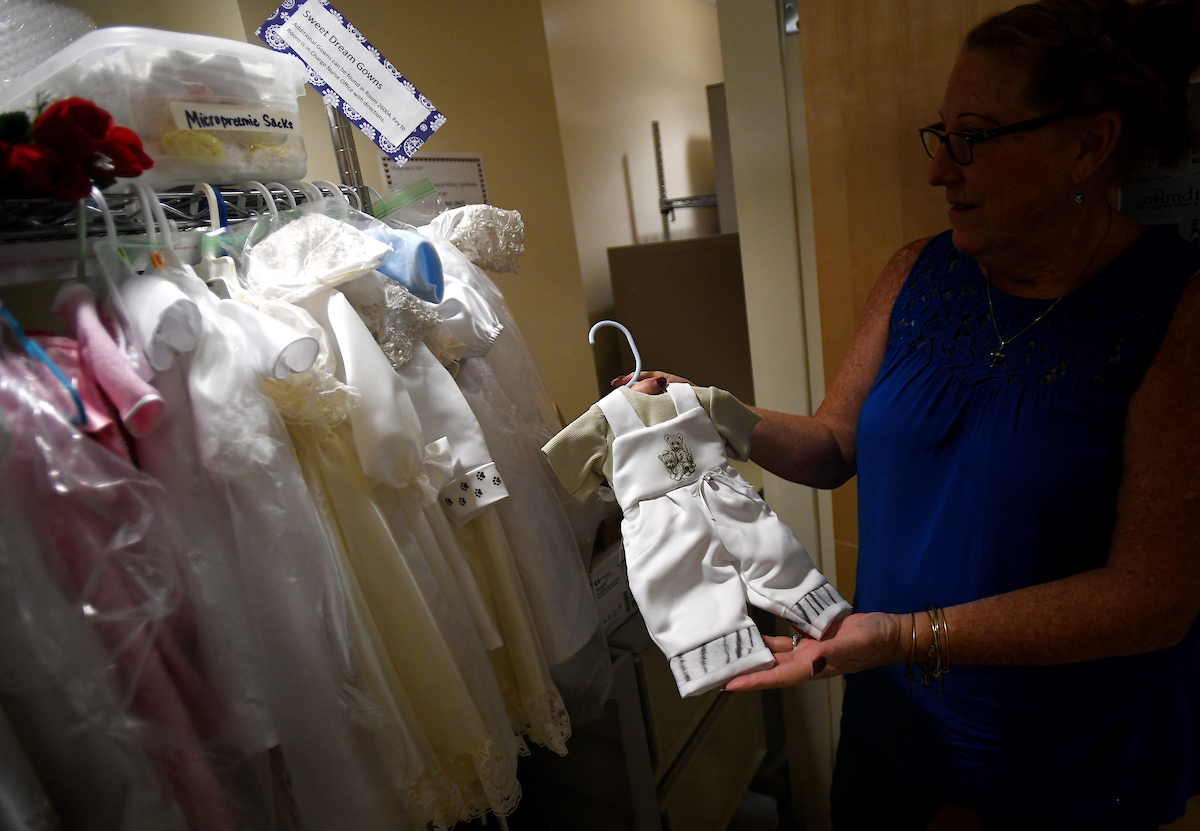 This program, she just knew it, was going to be special.

The first baby to receive an outfit – made from a donated wedding gown -- was a little girl. Her family was able to spend fours days with their baby before she passed away.

“Some of the most amazing families are the families who have lost a baby,” says Gibson. “You just want to cry because they would have been the most wonderful parents.”

Gibson helped that mom paint her baby girl’s fingernails and toenails. They did canvas art and ornaments for Christmas. They took her footprints and crafted 3-D molds.

“They had some great memories with their daughter,” Gibson says. “It wasn’t just, ‘My baby died.’”

And they received a beautiful gown for their daughter’s burial. The tag with it read: Little one, know that all who have shared in your care have done so with tenderness, respect and dignity. By tying these ribbons, we say goodbye to you and place you in the care and hands of another.

Her mom loved how the dress was so long and the lace draped over her daughter’s casket, Gibson said.

It’s those special little touches that can mean so much.

And this program has meant so much to Gibson. Fourteen years ago, Gibson lost twin granddaughters who were born at 24 weeks.

“I realized the importance of healing,” she says. “And I really had a love of trying to care for people when they were going through that journey.”

And when she retired last month, Gibson struggled a bit with leaving that role at Riley.

“Out of all the things I did, that was the hardest thing to let go of,” Gibson says of the bereavement program. “It’s always been my baby.”

But she knows ‘her baby’ is left in good hands.

“I work with some amazing nurses and an amazing team,” she says, “And they do amazing jobs of taking care of families in the worst moments of their lives.”

The new must-have for school: Masks

What parents need to know about COVID-19