Leading with their heart in Jordan

Riley team led by Dr. Mark Turrentine returns to save lives in the Middle East for the first time since March 2020.

It was March 2020 when Dr. Mark Turrentine and his team of Riley Hospital for Children clinicians last embarked on a medical mission trip across the globe.

No one knew then that it would be nearly two years before they would return to Amman, Jordan, as the COVID-19 pandemic held the world in its grip, changing life as we knew it.

But finally, the stars aligned, and after a couple of false starts, the Riley team returned to Jordan in late October, where they operated on a dozen children with life-threatening congenital heart defects.

“It was very exciting to go back,” said critical care physician Riad Lutfi, who has participated in several Riley/Rotary mission trips with partners Gift of Life Amman, Chain of Hope, Gift of Life International, The Josh Lindblom Foundation and the Rotary Club of Greenfield, Indiana.

“We weren’t sure what to expect with COVID. Whether the nurses we worked with would be there, how many COVID patients they had, what kind of support we would have, but it was all better than expected,” Dr. Lutfi said.

Dr. Turrentine, who has made more than two dozen medical mission trips to the Middle Eastern country and many others, said in an earlier interview that he feels a sense of responsibility to these children, despite never having met them. If not for his team, they might not have access to lifesaving care.

“I know that 80 to 90 percent of these kids will never get to surgery if we don’t take a team there,” he said. “There is such a demand and there are so few opportunities for them to get access to surgical care.”

The dozen children he and his team treated on this trip are just a fraction of those who need help.

“It’s incredible the volume of kids over there who need heart surgery,” the surgeon said pre-pandemic.

That’s why he rarely takes personal time off anymore. His “vacations” are spent caring for kids a world away from home.

“For me, I feel it’s selfish to have time off and not go operate on a group of kids, because I know that every trip we don’t make, there’s 10, 12, 14 kids who may never get operated on,” he said in a previous interview. “That’s the way it has evolved.”

The resources to care for these children are limited, a reality that Dr. Lutfi understands. A native of Damascus, Syria, he has been on several medical mission trips to neighboring Jordan with Dr. Turrentine.

War and political turmoil have caused endless suffering for the people in Syria, especially the children.

Two of the patients the team operated on last week in Jordan were Syrian children, Dr. Lutfi said, including a little boy who had waited 19 months for the Riley clinicians to return to complete his corrective surgery for tetralogy of fallot (a rare condition caused by a combination of four heart defects present at birth).

“We operated on him in March 2020 (placing a central shunt), and he was waiting for his completion all this time,” the physician said. “I can’t imagine what the family has gone through.”

Yousef, now 2, came through the surgery and is recovering. What was difficult for Dr. Lutfi to see, however, was the effect that ongoing violence in Syria has had on the child.

“You can see the war-torn effect in him. I turned down the light at night, wanting him to sleep and help his heart rate go down after surgery. Instead, he screamed in the dark,” Dr. Lutfi said.

“He was in the dark for two years of his life in Syria, he wanted some light. It’s striking to me to see these kids grow up without electricity in a country with a fair amount of resources.”

COVID concerns and scheduling issues reduced the number of Riley team members who traveled to Jordan this year. Besides Drs. Turrentine and Lutfi, members of the group were CVICU nurses Sheila Rocchio and Heather Dornbusch and operating room nurse practitioner Brittany Mote.

Patients who are treated for congenital heart defects at the Riley Heart Center have access to world-class expertise and resources for intensive care. 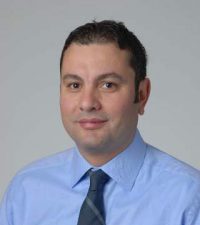