A horrific crash, a remarkable recovery

A 13-year-old athlete couldn’t walk or talk after a serious accident. Now nearly three months later, Matthias Pfister is inspiring his parents and his hospital care team. “He will probably walk out of the hospital as one of the truly most amazing recoveries I have ever seen.” – Dr. Jeffrey Raskin

He doesn’t remember anything about the accident, and that’s a blessing for Matthias Pfister. For his parents, it’s a different story. 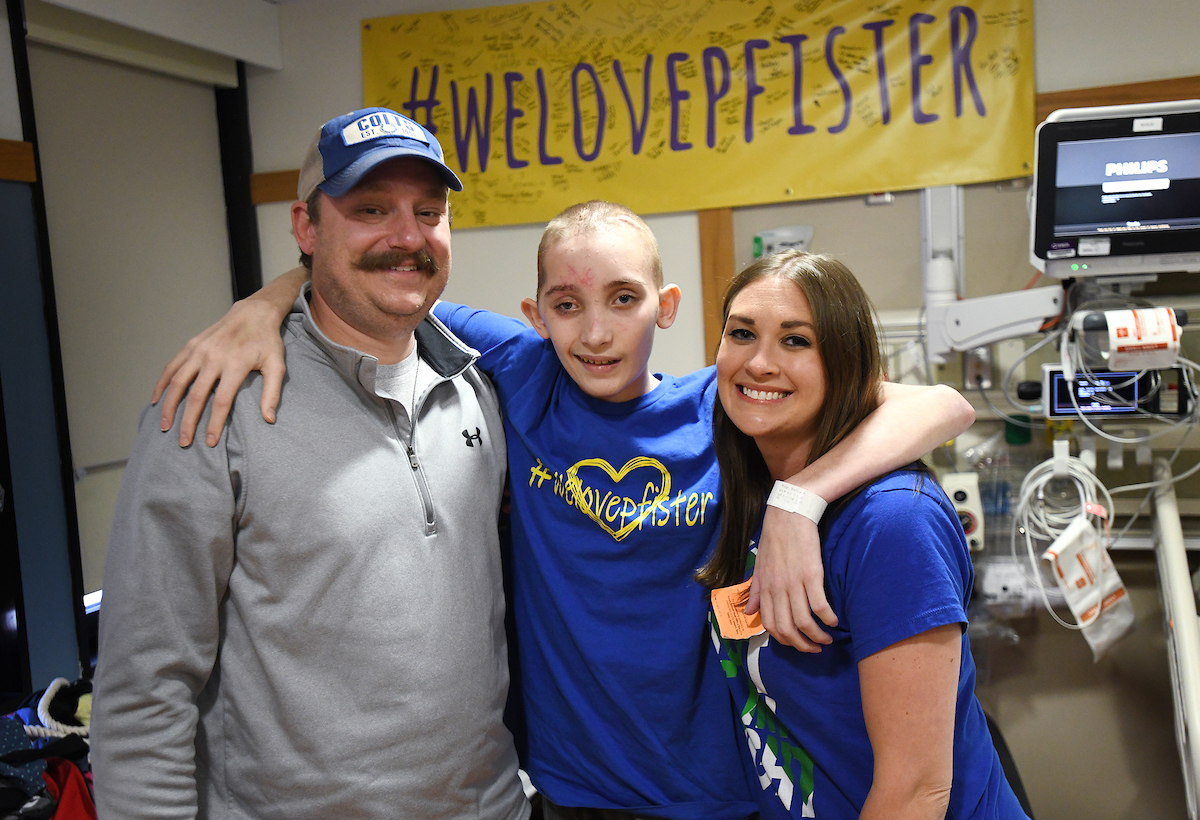 Kyle and Lauren Pfister can’t erase the memories of that horrible Saturday back in February – the day their 13-year-old son was critically injured in a car crash not far from their Danville, Indiana home.

Kyle was at the wheel when he and another vehicle collided at an intersection. The brunt of the impact was on the passenger side of the car – Matthias’ side. He was knocked unconscious. Within minutes, a Pittsboro EMS unit was on the scene to render first aid.

But also coming up on the scene was Lauren in another vehicle with the couple’s two younger children and their grandmother. They had stopped to get gas after the whole family left a dance recital in which Matthias’ sister had performed.

“I was a couple minutes behind them and we came up on the accident,” Lauren said. “EMS was already there. It’s just crazy – in the blink of an eye they were there.”

In that same blink of an eye, their lives changed. But they were also blessed that day, Lauren believes.

Riding with the EMS unit was a Hendricks County emergency physician who was shadowing them. When they were able to get Matthias out of the vehicle, that doctor intubated Matthias on the scene and made the call for him to be airlifted to Riley Hospital for Children at IU Health.

“It was a true blessing that he was there that day,” Lauren said.

That blessing extended to his care team at Riley when he arrived at the hospital and in the months since then.

“HE WAS COMATOSE, LITERALLY DYING”

When pediatric neurosurgeon Dr. Jeffrey Raskin got the call that a trauma patient was on his way to Riley, he sprang into action.

“When I get a call like I did with Matthias, and it is clear we are going to need to engage the resources of the Riley neurosurgical OR team, I call our nurse leader Diane Seibold and ask her, ‘You wanna save a life?’” Dr. Raskin recalled.

Matthias suffered a devastating head injury in the crash. On top of a depressed skull fracture and epidural hematoma, one eye had popped out of its socket.

“I told the family Matthias is very ill and will die unless I take him to the operating room, and he still might die after that,” the surgeon said. “I think within 30 minutes he was in the OR. The decompressive craniectomy to remove skull, repair scalp lacerations, debride the brain and stop the bleeding did not take long, about an hour and a half. After that, he made a steady and continuous recovery, which has been remarkable to watch.”

The first few days after the accident were a blur for Kyle, who was not seriously injured, and Lauren, along with their parents and Matthias’ aunts and uncles, all of whom descended on the third floor of Riley, taking over the family lounge of the PICU that first week.

Matthias, who loves playing baseball, basketball and football, suffered a traumatic brain injury, followed by a stroke and couldn’t walk or talk. Dr. Raskin operated on him several more times, including putting in a shunt to relieve pressure in his brain. Each time, Matthias slowly improved a little bit more.

The teen’s mom will never forget the moment she knew her Matthias would be OK.

First, it was a squeeze of the hand. Then a thumbs up. Then he wanted to have a thumb war, Lauren recalls.

He still wasn’t speaking, but “we knew he was in there,” she said. “And so we just kept pushing.” 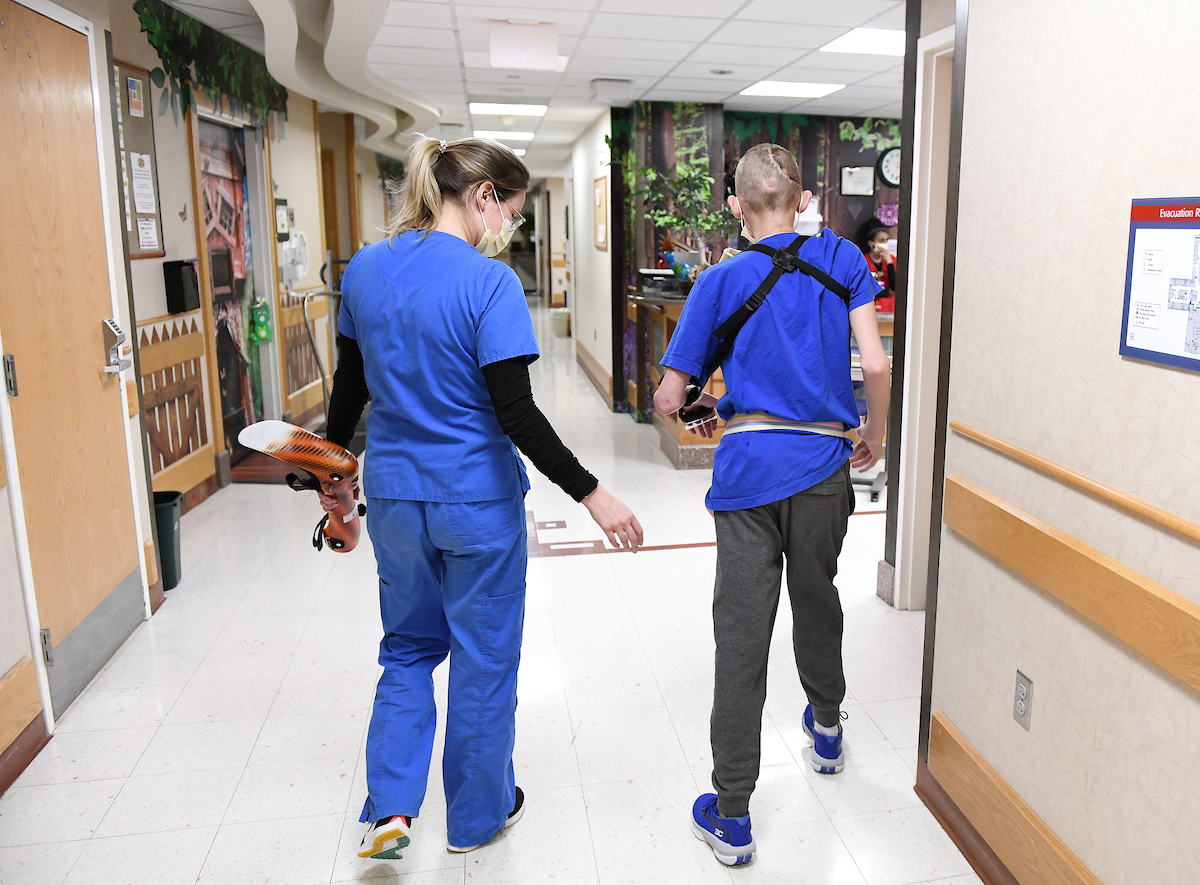 Today, nearly three months after the accident, Matthias has made remarkable progress, thanks to intense daily therapy in Riley’s rehab unit, where he has worked with physical therapist Kristina Davey and others to regain his speech and mobility.

“He has shown excellent progress and is so motivated,” Davey said. “His family is amazing and really aiding in his recovery. When I first saw him, he wasn’t talking and couldn’t sit up by himself, and now he is walking without help.”

Matthias still has some left-side weakness, particularly in his arm, and he lost vision in one eye, but his perseverance means he continues to improve.

“He went through a lot with the brain injury and stroke. He was completely nonverbal, but he was in there, which was really cool to see,” Davey said. “He would give a thumbs up, thumbs down, hang 10 or I love you. He just couldn’t find his voice yet.” 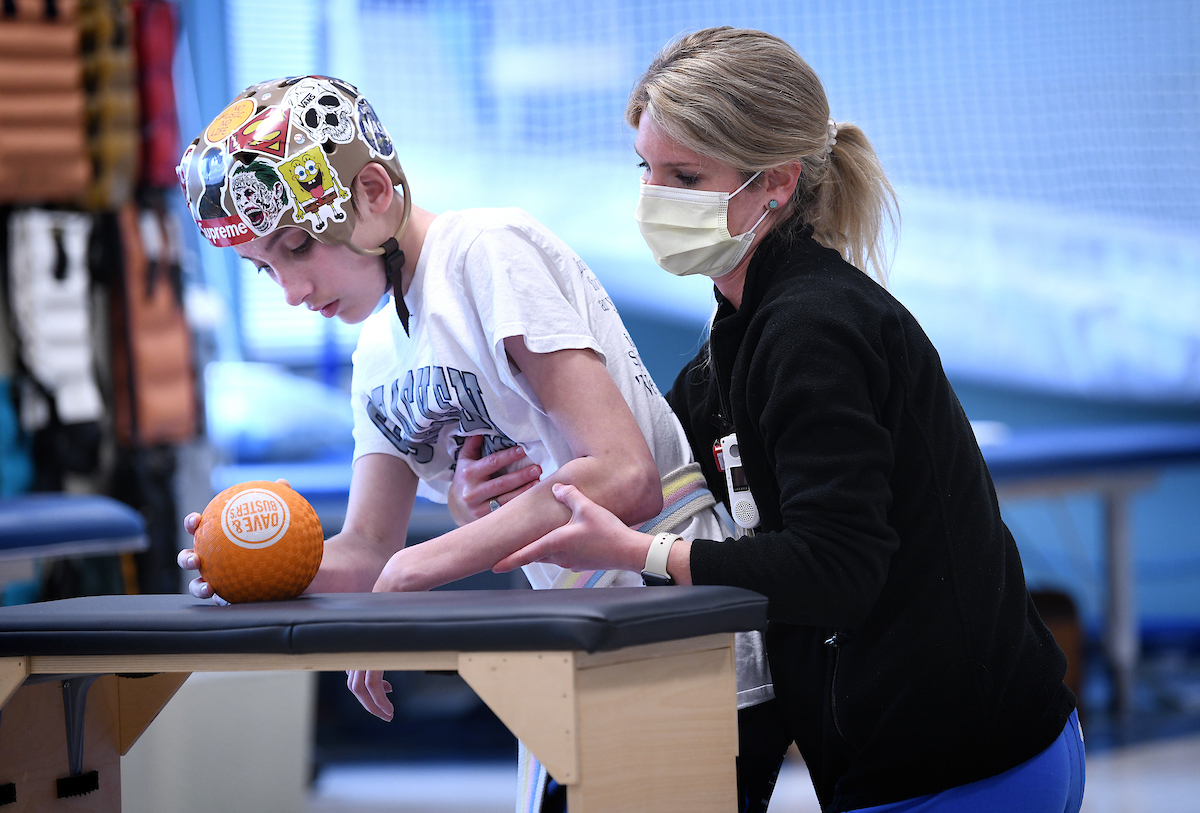 It wasn’t long before the social, personable teen found his voice, and it seems he hasn’t stopped talking since. He greets everyone he sees inside and outside the rehab unit, asking about their day and sometimes playing a song on his phone and inviting people to dance in the hallway.

“No matter what floor we’re on, he’s made great connections with everyone,” Lauren said.

That includes famed sports announcer Dick Vitale, whom Matthias hasn’t met but he did name his pet rabbit Dickie V when he was little. The teen’s aunt reached out to Vitale on social media, and the larger-than-life personality and motivational speaker sent Matthias a care package that included an autographed copy of his book, “It’s Awesome, Baby.”

Matthias is a huge sports fan. His favorite Indiana Pacer is Victor Oladipo, and he hopes to go to Indiana University someday like his dad. Baseball is probably his top sport – Cubs are No. 1 in his book. He plays on a travel baseball team – the Indiana Bats – “best travel team there is,” he says. 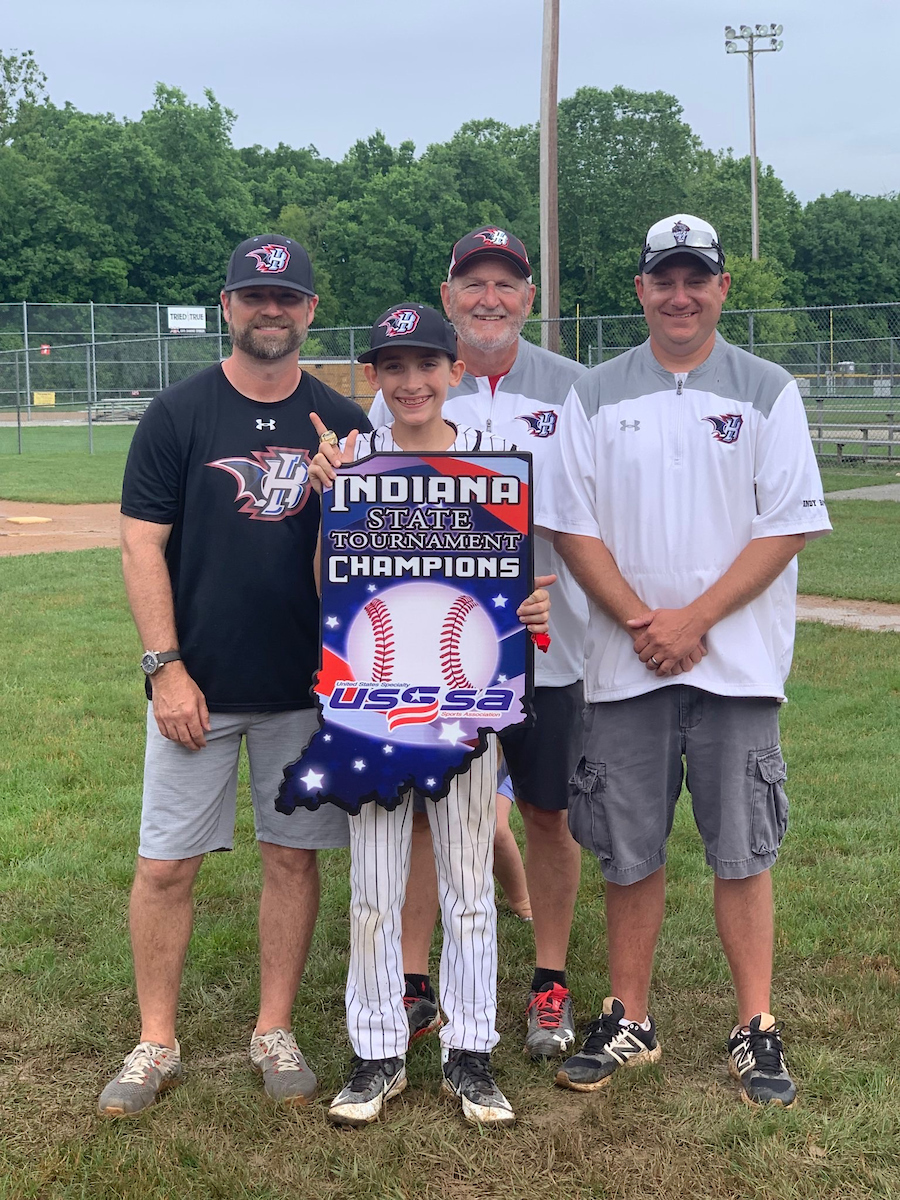 That team and friends in Danville have lifted Matthias and his family up since the accident – selling bracelets and T-shirts to raise money and hosting a Dine to Donate night at a local pizza restaurant. Hanging above his bed at Riley is a large banner signed by a lot of those people who have continued to support the Pfisters from a distance since the COVID-19 outbreak.

The seventh-grader, who is working on a rap video with music and dance therapists at Riley, is expected to be discharged May 20, at which time he will be reunited at home with his beloved Bullmastiff, Thor.

Dr. Raskin marvels at the boy’s will to fight through his injury.

“He has been here about 80 days and will probably walk out of the hospital as one of the truly most amazing recoveries I have ever seen,” the surgeon said.

“The majority of the credit should go to Matthias and his family. The rest should go to the hundreds of first responders, nurses, technicians, doctors and rehab specialists who have contributed to his complex care cycle,” Dr. Raskin said.

“Matthias is alive because of Riley Hospital for Children and everything it can offer to critically ill children, but he is flourishing because of his will and his family’s love.”

BACK IN THE GAME

Matthias hopes he can play sports again one day – maybe next year after being cleared by his doctors. He knows football likely is off-limits but longs to return to the baseball diamond.

Until that time, he plays the game virtually with his dad on his PlayStation, bragging that he beats him every time.

That competitive spirit has helped him in his recovery, his parents believe. His optimism has inspired them.

“I’m good, I’m positive,” Matthias jumps in to say when his mother is asked how he has maintained a good outlook. “You have to work hard,” he said.

“I have never met somebody who has gone through so much and can be so positive and so forgiving,” Lauren said. “When I was 13, I couldn’t have been as strong as him. It’s inspiring and amazing to see.”

She credits her husband for their son’s positive outlook.

“He has his dad’s mentality for sure – optimism. I’m a mom and I worry, and these two (pointing to her husband and son) put me in my place, telling me everything’s going to be alright.”

Kyle said the regrets and worries in the days after the accident have been replaced by feelings of gratitude for the progress Matthias has made and for the love they have felt during his recovery. Now, he said, they feel lucky.

“You think you’ve always had faith and you’ve always understood the word proud, until you’re put in a position like this. And then you really understand.”