When Dr. Schreiner And A Motor Home Sped Through Indiana To Rescue Dying Babies

When the ambulance screeched to a stop, Dr. Schreiner would run into the hospital, run through the halls to get to the baby. He would resuscitate that baby, bringing it back to life.

The call had come in from another Indiana hospital. There was a sick, premature, tiny baby who had just been born.

Doctors and nurses at that hospital didn’t know what to do. Neonatology was a new field in the 1970s. Most severely, premature babies died.

But Richard Schreiner, M.D., a neonatologist with Riley Hospital for Children at IU Health, did know what to do. He was a young physician with elite training in tiny newborns.

When Riley would get that call, Dr. Schreiner would jump into the back of the newborn intensive care unit – a souped up motor home --  and race to places like Lafayette, Richmond, Muncie and Kokomo. 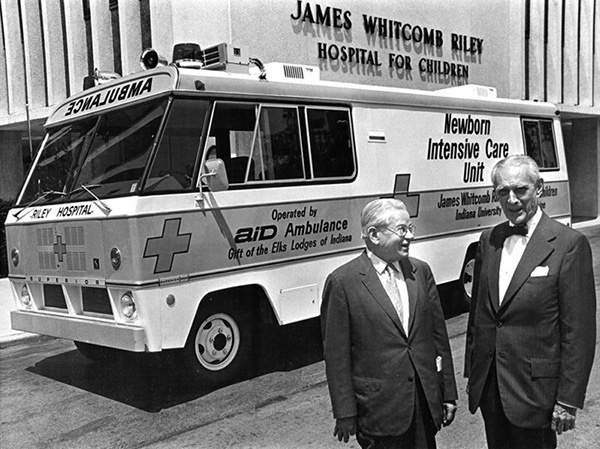 Wherever the sick baby was, Dr. Schreiner would be there.

Sometimes, he would be thrown and tossed about in the back of the ambulance as it turned and raced down highways and roads.

But then when it came to a stop?

He and the ambulance driver, who was trained in minor medical tasks such as getting the IV ready, would then whisk that baby away and hurry back to Riley.

About 200 runs a year were made in those days. Dr. Schreiner went on many of them, but he wasn’t the only doctor at Riley speeding through Indiana to save babies.

Edwin Gresham, M.D., did it too. He, after all, was the man behind that mobile newborn intensive care unit – lovingly nicknamed the Gresham Mobile. 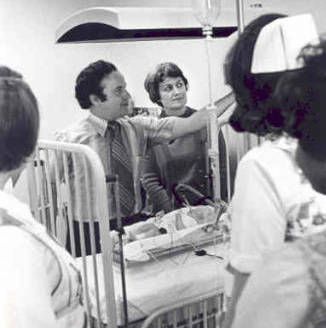 Dr. Gresham had started his career as a family practitioner in Aurora, Ind. But after five or six years, he decided he wanted to be a pediatrician.

He came to Riley to do his residency and then went to Denver for two years to train to be a neonatologist.

When he came back to Riley in 1971, he was one of just two neonatologists in the entire state.

“Ed was a brilliant, manic kind of guy,” Dr. Schreiner says. “He had this idea of saving these sick babies. Nobody in other hospitals knew how to take care of newborns. This was a whole new field.”

Dr. Gresham started going to other hospitals to pick up sick babies in a regular ambulance with an incubator inside. But that wasn’t what he really needed to give newborns the best care.

He decided to design the mobile newborn intensive care unit – a motor home decked out as a mini ICU.

“It was a very novel idea, a novel thing,” Dr. Schreiner says. “And it truly made a difference. It really did.”

Dr. Schreiner remembers those days fondly inside that ambulance. The time the back door swung open on 38###sup/sup### Street and he had to hang out the speeding ambulance to pull it shut. The time he was looking out the window and saw an 18-wheeler come barreling toward the unit, barely missing a collision.

But, mostly, Dr. Schreiner remembers those moments inside with those precious babies. And how rewarding it was to be a part of saving their lives.