Jacob Parry nearly died of leukemia, but the selfless gift of a stranger restored his health. Over the weekend, he met his superhero at a baseball game.

Jeff and Kaylie Parry knew it would take a home run in medicine, plenty of prayers and a dose of good luck if they were ever to see their little boy grow up.

At the time, Jacob Parry was just a baby. A baby battling one of the most aggressive cases of acute myeloid leukemia that doctors at Riley Hospital for Children had ever seen as they prepped him for a stem cell transplant.

With the help of their cancer care team at Riley, including Dr. Jodi Skiles, director of pediatric stem cell transplant and cellular therapy, and Audrey Hopper, stem cell transplant nurse coordinator, they swung for the fences, and last weekend their victory played out on the field of a minor league baseball team hundreds of miles from home.

If you’ve ever seen the movie “A League of Their Own,” you’re familiar with the expression, “There’s no crying in baseball!”

But there was plenty of crying on the Massachusetts baseball diamond when the Parry family got to meet their personal hero – the woman who saved their son’s life.

“WE ARE SO VERY BLESSED”

Jeff and Kaylie and their three sons, 5-year-old Jackson and 3-year-old twins Jared and Jacob, made their way from Bremen, Indiana, to Worcester, Massachusetts, last week to meet Rachel Buck, who donated bone marrow to save Jacob two years ago.

Just before that meeting, Kaylie spoke on the phone about what it would mean to lay eyes on Rachel for the first time.

“Prepare for me to ugly cry on the jumbotron,” she laughed, as her boys lay sleeping nearby.

She and her husband don’t seek the spotlight, so the idea of media covering this event was definitely out of their comfort zone. But they only had to look at Jacob to see that it was all worthwhile, not just for them but perhaps for another child who could be saved.

“We prayed about it a lot, and we want to do it to help another family,” Kaylie said. “I want to cry right now just thinking about meeting her.”

Kaylie did just that when Rachel bounded onto the diamond after being introduced by former Villanova University football coach Andy Talley, founder of Get in the Game. The nonprofit leverages the power of college athletics to recruit potential bone marrow donors for Be The Match.

There were a lot of tears that day on the pitcher’s mound as Kaylie and Rachel hugged and Jacob got to meet his personal superhero.

“It was amazing,” Kaylie said later, still feeling the high from the weekend. “There really are no words. We are so very blessed.”

Three-year-old Jacob was nonplussed by the fanfare, but he did enjoy playing in the dirt after the game. And that is one measure of just how far he has come since the summer of 2019.

THE FIGHT OF HIS LIFE

Jacob was diagnosed with leukemia when he was just a baby. He went through chemotherapy at Riley in preparation for a stem cell transplant in the summer of 2019. But he needed a donor.

His parents, Jeff and Kaylie, were 50% matches, as was his older brother, Jackson. His twin (not identical) was a 0 out of 10 match. Enter Rachel, who had registered with Be The Match as a student on the campus of the University of New Haven in Connecticut. It took just a couple minutes to have her cheek swabbed and her information entered in the database.

“Cancer has struck my family, as it has so many others,” she said, “so I thought, why not register? What are the odds I’m going to get picked?”

It was some months later when she got the call that she was a 100% match for a little boy in Indiana. At the time, she was a senior in college. She could have backed out, but with the support of her family, she stepped up big time.

Even when Jacob had to have another round of chemo in the summer of 2019 and the timing for Rachel’s donation had to be pushed back to just days before her 22nd birthday, she was unwavering.

Scheduling can sometimes be the hardest part of matching donors and recipients, Dr. Skiles said.

“Rachel is clearly a hero because she was willing to do this. When we have unrelated donors that match through the registry, it is often a battle to get a schedule put together on a calendar that works with the donor’s schedule,” she said. “That can be really hard on the patient, who is at the will of whatever their leukemia or cancer chooses to do.”

Rachel, now 23 and a med tech in the microbiology lab at Tufts Medical Center in Boston, was different, Dr. Skiles said.

“From the word go, she was all in, whatever we needed, whenever we needed it. She is amazing, truly lovely in every way. It’s not often that you meet a 23-year-old who has a real sense of the world around them.”

“HOW COULD WE HAVE MISSED THIS?”

Dr. Skiles flew to Boston over the weekend for the meeting between the Parrys and Rachel, who was accompanied by her extended family, her fiancé and his family. Transplant coordinator Audrey Hopper drove out with her 11-year-old son, Wade, a huge baseball fan.

“I brought my son so I could share with him some of the reasons why mommy’s busy sometimes,” said Hopper, who works long hours coordinating procedures and advocating for patients at Riley.

While it wasn’t easy to get away, it’s important to celebrate the wins, she said, and to encourage more people to add their names to the registry. Appropriately, a registry event for Be The Match took place during the baseball game as well.

“We need everyone to be on the bone marrow registry, especially people of different ethnicities and backgrounds,” Hopper said. “We need help because these kids have amazing lives to live.”

Reflecting on the weekend, Dr. Skiles said she knew it wasn’t necessary that she be there, but she and Hopper really wanted to find a way to make the trip.

After it was over, both realized how very much it meant to them personally and professionally.

“How could we have missed this,” Dr. Skiles said, noting how emotional it was to meet Rachel and to reunite with Jacob, his parents and his extended family, two years post-transplant.

“It was fun to be with them in this setting where we just get to enjoy them as people instead of in the mode of medical care,” she said. “And Jacob looks amazing, like a normal, healthy boy.”

One of the most striking moments for her was after the game when she and others were gathered around a tent and Jacob was sitting on the ground, playing in the dirt. Rachel sat down right next to him.

Two years ago, he couldn’t have done that, Dr. Skiles said. It was too risky. The fear of germs was always on his parents’ minds.

But in that moment, the realization that it was Rachel’s immune system protecting him gave both her and Hopper chills.

“It was such a great opportunity to appreciate the fruits of our labor that we don’t often get to see.”

BETTER THAN A WEDDING

For Rachel, the weekend was magical.

“My wedding day is not even going to top this,” she said. “My fiancé already knows that. The whole weekend, looking back, it still feels almost like a fever dream. I can’t believe it happened. I can’t believe that I got to meet this insanely strong little boy and his family.”

And now their family has become her family, she said. It’s been an emotional ride.

“Jacob barely had a year on the planet and had to fight one of the hardest fights of anyone’s life,” she said. “And now he can go to preschool and he can learn how to ride a bike and he can play baseball and learn to drive a car when he gets older, things that people who are healthy take for granted.”

And he and his family can come to her wedding in 2023.

“They are definitely getting an invite!”

She wants people to know that when you donate bone marrow (a procedure that required her to spend a day at an East Coast hospital), you’re not just changing one person’s life.

“It’s his family, his community, the doctors and nurses at the hospitals. If Jackson and Jared grew up without their brother, that changes their lives. To take a day off to go in for a procedure, it’s so rewarding I can’t even think of anything better.”

ABC News thought so too, featuring the story on its “America Strong” segment over the weekend.

For Kaylie and Jeff, strength has been a hallmark of their fight. And they’ve gained that strength through their “village” – family, friends, doctors, nurses, and yes, strangers like Rachel, who now is very much a part of their family, too.

“Jeff and I are very certain that God has kept Jacob on this Earth for a reason, Kaylie said. “We have no doubt that this team was handpicked to be in our lives. It is obviously a God thing. Dr. Skiles and the whole team has become family. It’s such an awesome feeling to know that you’re not just a number, you’re a part of this group, and they treat you the same as they would treat their kids.”

Kaylie remembers all too well the darkest days at Riley when Jacob’s health was so critical. Shortly after the transplant, the Riley team received a book meant for the family and sent by their then-anonymous donor (Rachel) to Be The Match.

The book is “Tomorrow I’ll Be Brave,” by Jessica Hische. In an emotional scene captured on video, Dr. Skiles, Hopper and others take turns reading from the book as Jeff and Kaylie sit next to Jacob’s bed at Riley while he sleeps.

“There was not a dry eye in the room,” Kaylie said. “I knew then it was going to be a very special relationship.”

Jacob received his stem cell transplant at Riley Hospital on Sept. 20, 2019. He was hospitalized for seven months and nearly didn’t survive, but today he is a healthy little boy.

“He loves to run and play with his brothers, he loves to be outside, and if he could play in the dirt every day, he would,” his mom said. “He goes wild over Mickey Mouse. He’s just the sweetest little thing.”

While his twin’s nickname is “Bam-Bam,” Kaylie said Jacob is gentler, a boy who has always loved to cuddle. That connection helped them get through the worst days.

“He loves to hold my thumb. We did that a lot when he was in the ICU and I would wrap his hand around my thumb just to let him know I was there. As a baby, he would let you rock him for hours. When your child is sick and hooked up to an IV pole, you spend a lot of time sitting and rocking.”

The Parry family hopes their story inspires others to register to become bone marrow donors at bethematch.org. 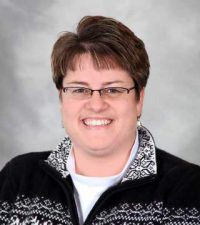