Three months after hosting her own FUNeral, Miriam Sawka dies at 17

‘I would love it if there was a magical cure,’ the cancer patient told guests at her FUNeral. ‘But I cannot wait to get to heaven. I was not ready four years ago, I was not ready a month ago. I’m ready now.’

She was an old soul in a young body. A body wracked by cancer but with a heart that didn’t want to quit. Until finally, it did.

Miriam Sawka now has the answer to life’s greatest mystery. What happens after death? If we are believers, does our soul rise from our body to find peace and a heavenly home?

Miriam believed in all of that, and she couldn’t wait to get to heaven, she told friends and family members. The 17-year-old Carmel resident, who had suffered from Ewing sarcoma for several years, passed away Jan. 31.

She may have been cheated out of a long life, but she lived it on her terms, and she got the bonus of one more Christmas, one more New Year’s that doctors feared she would not see.

“I’ve made my peace with everything,” Miriam said in an earlier interview. “I believe I’ll be going to a better place.”

But not before planning and hosting her own FUNeral in advance. 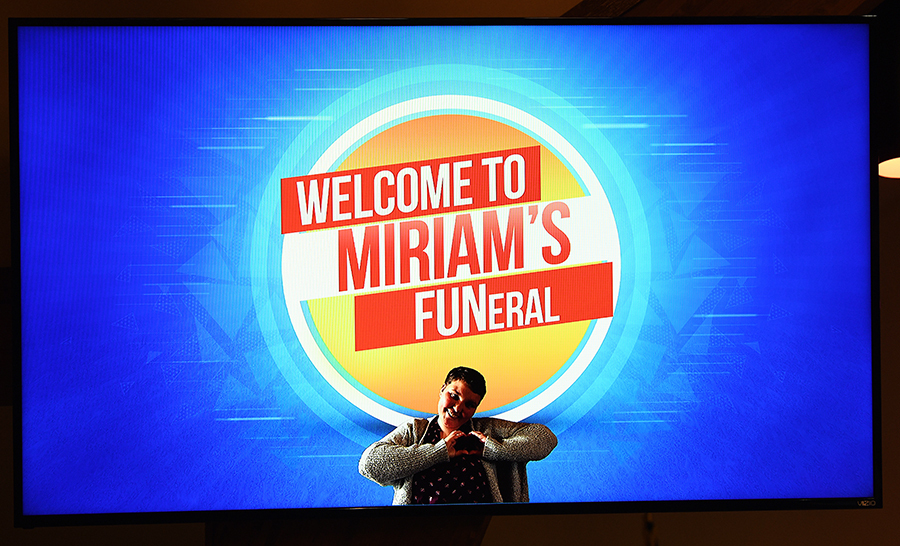 Why wait until she’s gone to celebrate her life and the love she had for so many, she reasoned. And what’s the point of having people say nice things about a person who is no longer around to hear them?

“I don’t really like funerals,” she said. “I think it’s unnecessary how sad they are.”

So she put the emphasis on FUN, hosting a party filled with music, food, laughter and only a few tears. She donned a cap and gown and was presented with her high school diploma, she gave a speech filled with tenderness and humor, and she said goodbye to hundreds of family members and friends, as well as physicians and nurses from Riley Hospital for Children who have treated her for the past year.

In her remarks to the crowd, she said she didn’t really want to talk about the cancer that started in her leg when she was 12 before spreading to the soft tissue around her lungs. Whenever doctors removed one tumor, another grew. By the time the cancer returned again last year, Miriam was done. Done with chemo, done with surgery, done with hospitals.

“I’ve been through hell and back multiple times, but my life is about so much more,” she said.

It’s about her parents, Dan and Stephanie, Salvation Army ministers who are holding tight to their faith as they say goodbye to their middle daughter. It’s about her sisters, Bailey and Lizzie, with whom she grew closer after the cancer diagnosis. And it’s about her tribe – those friends who’ve had her back even from far away.

People like Joe Lane, a pastor and school administrator from Michigan, where Miriam and her family lived for several years before moving to Indianapolis.

“This girl was truly my buddy,” Lane wrote in a Facebook post. “She always made me consider what a privilege it was to be in the family of God. She is my sister! Miriam Sawka, you made me better for the Kingdom, thank you!”

Reached by phone this week, Lane said he was amazed by Miriam’s outlook on life and eternity, especially as a teenager.

“I can remember times when she was having a procedure or she wasn’t feeling well, I’d say to myself, ‘I’ve got to step my game up in my gratitude and just who I am because there’s a girl who is living it,’ ” he said.

Her strength continued to inspire him.

“As her faith grew, she carried us up the hill with her.”

Major Bob Webster, divisional commander of The Salvation Army in Indiana, was with Miriam near the end.

“Miriam Sawka went home tonight to be with her Savior on January 31 at 7:48 p.m.,” he said on Twitter. “It was such a privilege to have the opportunity to pray with her just shortly before she entered heaven. She was a true testimony of pure love, joy and grace!”

She shared that love, joy and grace with her family at Thanksgiving and Christmas, all of them grateful for the time they had together.

She and her sisters put up a tree, decorating it with homemade ornaments from their childhood. They watched Hallmark movies, played games and shared simple gifts.

Despite her youth, Miriam often surprised people with her grace and acceptance of an uncertain future.

“Miriam was so beautifully able to hold laughter, happiness and gratitude in the same place with tears, sadness and questions of why,” Hatton said. “The grace and determination she exhibited during her illness is hard to describe.”

As was the “extraordinary” care by her parents to honor her wishes for her life, she added. “Dan and Stephanie Sawka are two of the most amazing people I have ever had the pleasure to meet.”

“We did our very best to optimize Miriam’s quality of life and honor her wishes.”

Miriam, who asked to be cremated, wants her ashes spread over the places she loved, including cancer camps in Indiana and Michigan. The remainder of her ashes will stay with her little sister, Lizzie.

“I would love it if there was a magical cure,” she told guests at her FUNeral. “But I cannot wait to get to heaven. I was not ready four years ago, I was not ready a month ago. I’m ready now.”