This mom’s prayers have been answered

Rose Odom wasn’t sure her daughter would ever crawl or walk. But now little Luna is doing both, thanks to early intervention and consistent therapy.

It’s not every day that you get to celebrate a graduation at barely a year old. But little Luna Odom did just that when she completed all of her therapies recently at Riley Children’s Health.

Luna, who was born four weeks early with one side of her brain more developed than the other, spent a month in the Riley NICU and was well behind developmentally. Her mom worried that she would never catch up.

Back in April, we visited with a then 10-month-old Luna and her mom, Rose, during an occupational therapy session at Riley. At that time, she was just starting to get up on all fours and connecting with others in her field of vision.

But she was still struggling to use her weaker side. Rose Odom hoped and prayed that her daughter would at least begin to crawl by her first birthday.

What a difference a few months makes! Luna indeed began crawling two days before she turned 1 in June, and just a few weeks ago, she took her first steps in front of a large group of cheering family members. Her vocabulary is also on target, advanced even, her mom said proudly.

In the words of physical therapist Laurie Niederhauser-Imel, “Luna has completely caught up with her motor skills and is age-appropriate at this time.”

It’s the kind of success story that happens behind the scenes all too often, but Niederhauser-Imel and Luna’s mom wanted to spread this news wider because of the focus on early intervention.

“Had we not gotten her into the Early Years Program with Dr. Emily Scott, we would probably still be dealing with all these problems,” Odom said. “But the fact that we started immediately after she got out of the NICU and we went all in with every type of therapy and every type of doctor, it really helped how quickly she grew out of this.”

“I think Luna did really well because she received early intervention quickly. Her challenges were quickly recognized by our NICU follow-up doctors, who referred her for services at 5 to 6 weeks of age.”

The program allows infants and toddlers to capitalize on the neuroplasticity of their nervous system as soon as possible. While First Steps is a wonderful home-based therapy program, it can often take a while to get in, she said.

“IU Health recognized this gap and created a program to bridge services for children in the Early Years age group (0-3) in order to maximize benefits. Luna was one of those kiddos.”

In addition to early detection, referral and prompt intervention, “the biggest contributor to Luna's success was her family's dedication to her progress,” the physical therapist said.

“They were committed to attend and participate actively in her therapy appointments. They were excellent at carrying over these strategies at home. This combination of interventions from all angles was a huge contributor to Luna's ultimate success.”

Odom is understandably thrilled with her daughter’s progress and grateful for the expert therapy she received, noting that the many months of twice-weekly appointments were all worth it.

While before, Luna couldn’t get her limbs to bend enough to wrap her mom in a hug, that’s not a problem anymore. Those hugs feel extra special now.

Once she started crawling, she also discovered the art of climbing, her mom said. She climbs onto everything – and everyone – she can.

“It’s not her preferred mode of transportation yet, but she is capable and tests the waters all the time.”

Yet, coming to the end of this journey feels somehow bittersweet, she said.

“I’m really excited that we finally got her caught up because I never thought we would, but we spent so much time with the team that I’m kind of sad to see them go.” 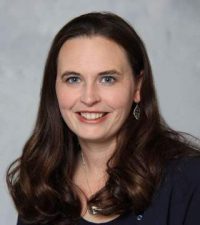