The repairman’s words stunned her: “I was ECMO Number 2”

They met over a washer and dryer, but their story goes back 32 years. Read how this Riley Hospital nurse and a stranger discovered a lifetime connection.

For Andrew Dufek, it was a routine call for an estimate on some plumbing work that took him to the home on the north side of Indianapolis.

For Deb Hutchison, it was an appointment she had put off for eight months, but it meant she would finally be getting a new washer and dryer installed in her home.

By the end of that brief visit last month, both Dufek and Hutchison would be in tears, marveling at the connection they’d made over something that had happened 32 years ago.

Hutchison freely admits to being a talker. She loves people and likes to ask a lot of questions. The semi-retired nurse at Riley Hospital for Children had chatted with Dufek about his family – he’s engaged and has a baby girl – and his career with Chapman Heating, Air Conditioning & Plumbing. 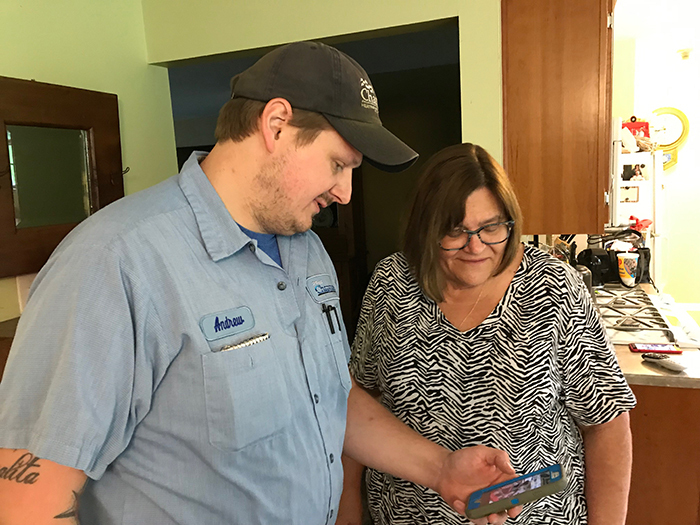 “I’m from a small town, where everybody is just so many degrees from everybody,” Hutchison said. “People are fascinating.”

But it wasn’t until Dufek was about to leave that Hutchison casually mentioned that she worked at Riley Hospital. A surprised Dufek looked at her and said, “I was a Riley baby. I was ECMO Number 2.”

Hutchison’s jaw dropped. “When he said that, I was stunned.”

That’s because ECMO was – and is – a big, big deal in the world of healthcare. And that’s how ECMO kids at Riley were (and still are) known. From ECMO Number 1 to ECMO Number 1,000.

“It’s kind of like your name,” the nurse said. “And he knew the significance of that. For so many years, he was known as ECMO Number 2. They wore their T-shirts with their numbers at the reunion every year.” 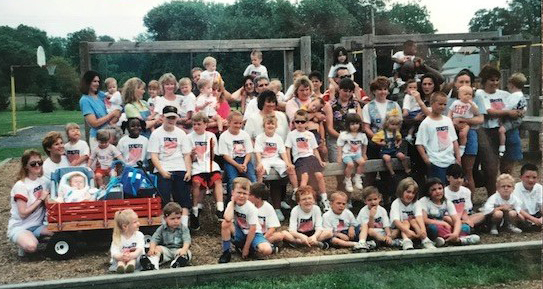 Dufek even showed Hutchison the scar on his neck.

ECMO is short for extracorporeal membrane oxygenation, a highly specialized treatment whereby a machine is used to temporarily take over the workload of the lungs and sometimes the heart. In 1987, Riley put the first babies in the state on ECMO. And Hutchison was there.

“The anticipation on the unit was so great back then,” she said. “He wasn’t my patient, but it was a time when we felt like they were all ours because it was such an exciting, momentous time.”

Dufek was born in 1987 at St. Francis Hospital in Indianapolis, then was rushed to Riley a day or two later, suffering from sepsis. His tiny heart and lungs were overworked trying to fight the serious infection.

He was hospitalized for about two weeks before going home, where he would continue to improve and eventually grow into the 6-foot, 1-inch man he is today.

After hearing his connection to Riley, Hutchison wrapped that tall “teddy bear” in a hug as both shared a few tears.

When he got into his truck, he immediately called his mom to share the story.

“We were both in tears by the end of the phone call,” he said.

Growing up, Dufek didn’t think a lot about his ECMO status. He went to some of the reunions and wore the T-shirts made for the occasion, but it wasn’t top of mind for him.

He does remember being glad to talk to other kids who knew what ECMO was and considers himself one of the lucky ones.

“A lot of those babies were far worse off than I was.”

Now every time he talks to his mom about that time, she tells him a little bit more. “I don’t know if she thinks I can handle more or she recalls more.”

While Dufek talked to his mom from his truck in the driveway, Hutchison shared the news of their meeting on a private Facebook page, knowing that other old-timers at Riley would be thrilled to hear about the coincidence.

“There was so much excitement and some nerves when this (ECMO) started,” said Hutchison, who was working in the next module over when the first ECMO baby came in. She was not trained in the treatment herself, but felt the energy of her colleagues who were. 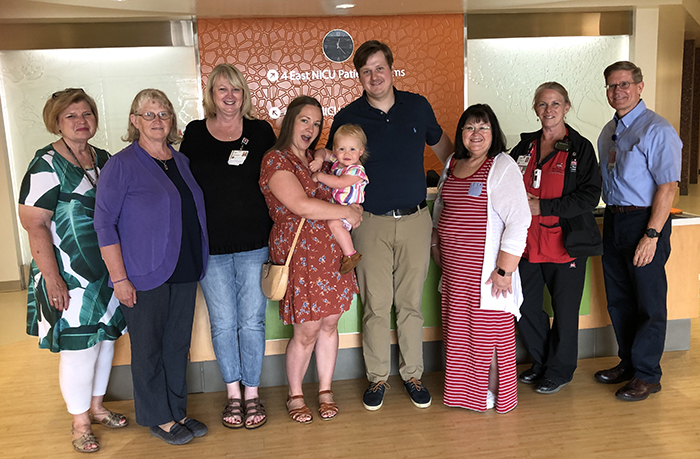 Marcia Herzog is an ECMO nurse at Riley now, but she was working at St. Francis 32 years ago and remembers caring for Dufek before he was transported to Riley.

She and other members of the ECMO and NICU teams, including neonatologist and ECMO pioneer Dr. William Engle, longtime ECMO director Susan Gunn and surgical director Karen West, recently gathered for a reunion with Dufek, his mom, his fiancé Sherri and daughter Hannah.

It was a thrill for Dufek, who said Dr. Engle explained the procedure to him and showed him some of the equipment used. Others described what the room was like during treatment and what the scars he carries on his neck mean.

“This group saved my life,” he said. “I’m forever grateful for Riley and its staff.”

Dufek’s Riley connection has always been special. But as a dad himself now, it’s even more meaningful.

“When you hear Riley, it takes you back,” he said. “I spent a lot of time there. For the longest time, we went back every year for checkups. Then I got into motorcycles, so it was a lot of fun to do the Miracle Ride every year. The first time I did that I had tears just seeing all those kids out there waving.”