This month marks the 45th anniversary of Dr. Schreiner walking into Riley Hospital for Children as a neonatologist. With his kind heart and unconventional leadership style, the hospital has not been the same since.

He’s walking the halls of the hospital, unassuming, under the radar. Just a man in khakis and a casual, short-sleeved, button-up shirt.

He probably has a book or some stack of papers he’s printed off tucked under his arm. He rarely makes it more than a few feet without stopping – to talk to someone -- to make a quip or to help.

This place, Riley Hospital for Children at IU Health, is Dr. Richard Schreiner’s kingdom. And, if he had any sort of ego at all, he would be the king.

There is a statue of Dr. Schreiner that stands in the lobby. He still keeps an office inside Riley. He gives tours of the hospital. He is the medical historian. He is, well, he is tremendous.

But Dr. Schreiner doesn’t see it that way. 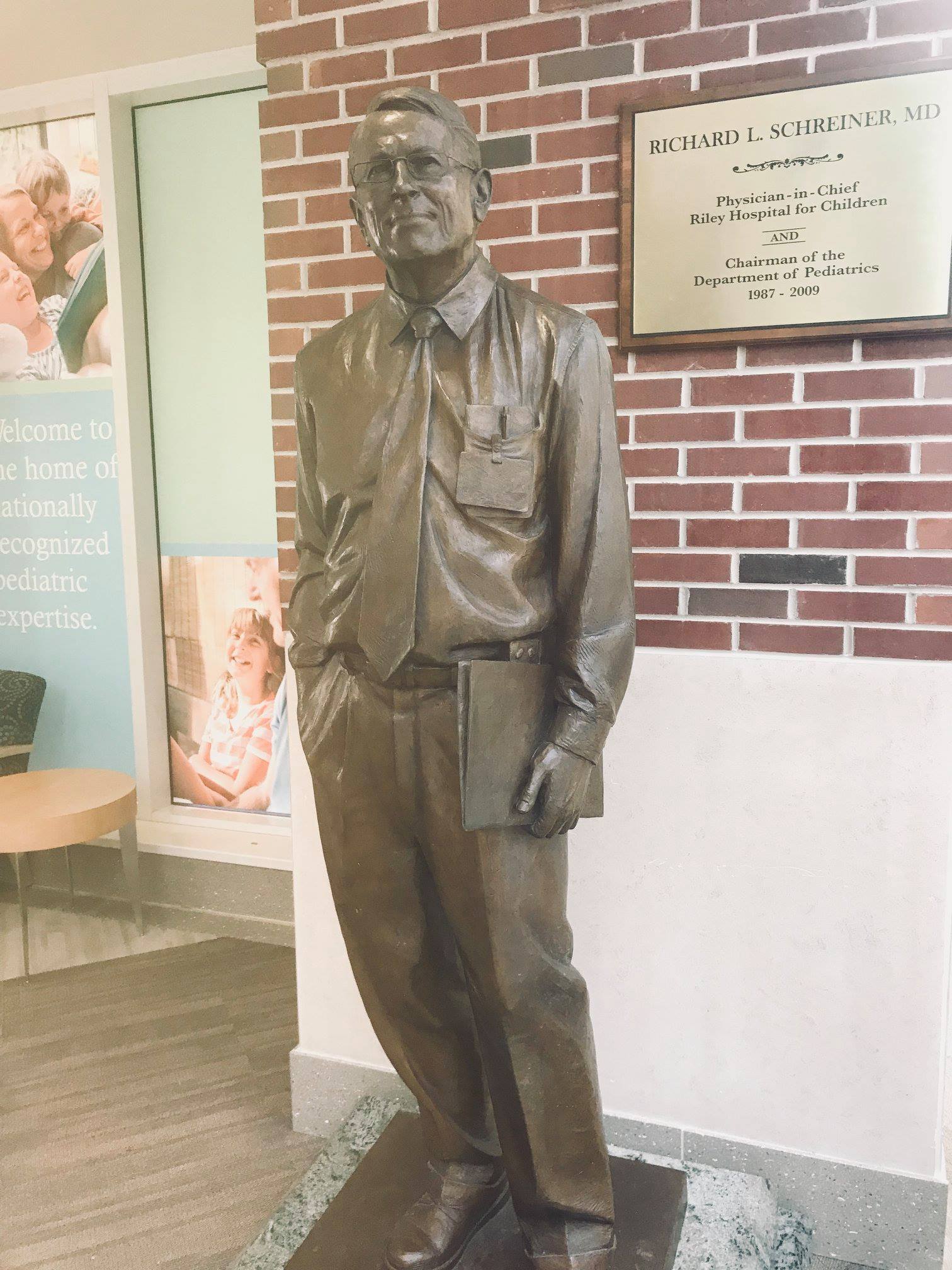 “I want my gravestone to say, ‘He was a solid average,’” Dr. Schreiner says. “That will be just fine with me.”

But Dr. Schreiner isn’t average, far from it. He is a legend at Riley, the place he came to 45 years ago as a neonatologist and later spent 22 years as chair of the Department of Pediatrics and Riley’s Physician-In-Chief.

He is a quirky, humble, adamantly adored man who has done more to catapult Riley to a world-renowned children’s hospital than just about anyone.

Yet, it’s the intimate moments inside Riley -- the things that have happened with the children -- that Dr. Schreiner is most proud of.

“Can I help you with anything?” Dr. Schreiner asked.

Her answer became a blur to Dr. Schreiner when he looked down into the infant carrier sitting at her feet.

A baby boy was lying in that carrier. Dr. Schreiner’s heart sank. The baby’s color was a deep blue. He was about to die…

Years later, an envelope arrived to his office from that mother: “Dear Dr. Schreiner, I don’t know if you remember me, but when I came to Riley Hospital years ago, you stopped and grabbed me and took me to the heart center. I just wanted to thank you for saving Matthew’s life.”

“Rich is certainly one of the finest physicians, clinicians I’ve ever worked with and one of a handful of the best teachers,” says James Lemons, M.D., who has spent 40 years as a neonatologist at Riley. “The most important reason that he was so successful is his total lack of ego. He never let himself get in the way of helping others.”

It was the 1940s. And none of the six Schreiner children would have egos. They were raised the right way. Hard work. Ethics. Your word is your bond. 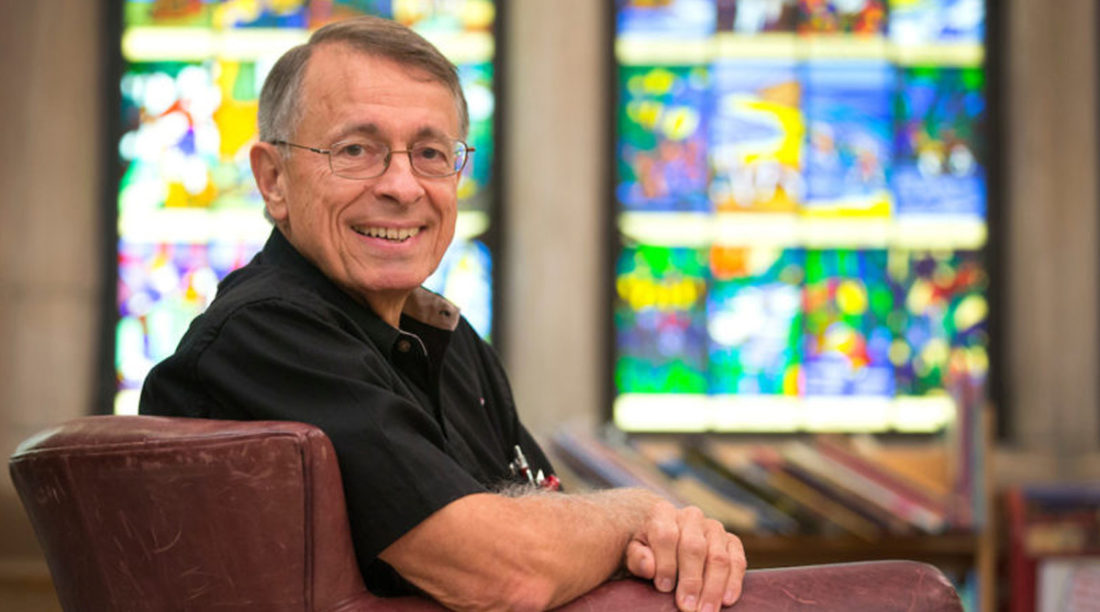 His was a typical, middle class family. His dad worked at a steel mill when Dr. Schreiner was a young boy and then he became a director of industrial relations for a combustion engineering company. His mom stayed home with the kids.

Dr. Schreiner’s early years were spent in a two-bedroom house, the three girls sleeping in one room, the three boys in the other room and his parents sleeping on a mattress in the living room.

The family lived modestly. They never went on vacation or out to eat.  To pass the time, the kids played baseball in the backyard, in the field nearby or in the park. They built forts in the woods. They played sports.

When Dr. Schreiner was 7, the family moved to South Hammond, Ind., into a nice, three-bedroom home.

Again, the three girls settled in one room and the three boys in another, but this time his parents had their own room. And this time, his parents splurged, adding on a powder room.

Dr. Schreiner watched the frugality being modeled before him and he liked it. He learned the importance of a dollar and became a stringent saver himself.

Even as a fourth grader, he had a job, delivering two afternoon newspapers six days a week. The older he got, the more he worked. Dr. Schreiner shoveled snow in the winter. He mowed yards in the summer.

“I had a lot of money, but I never spent it,” Dr. Schreiner says. “I was noted for being very cheap.”

One day, while walking through the Riley Outpatient Center, Dr. Schreiner passed by the information desk. A woman was standing with her two young children, one in a wheelchair.

She was sobbing. Her car had been mistakenly towed from the parking garage. She had no money.

Dr. Schreiner is still known for stretching his dollar any way he can. He likes to proudly boast that he wears his dad’s hand-me-down sport coat. But he also always carries an extra $100 bill in his pocket.

And he is extraordinarily generous.

When he saw that mother crying, Dr. Schreiner pulled that $100 bill from his pocket and promptly handed it over to her.

He loved science, but as he grew up Catholic, Dr. Schreiner toyed with the idea of going into the priesthood.

“But not for very long,” he says. “In 8th grade when the girls started coming after me, I decided I didn’t want to be a priest. OK, well, that was only in my dreams.”

By high school, Dr. Schreiner had one goal: get straight As so he could go to college and then to medical school. 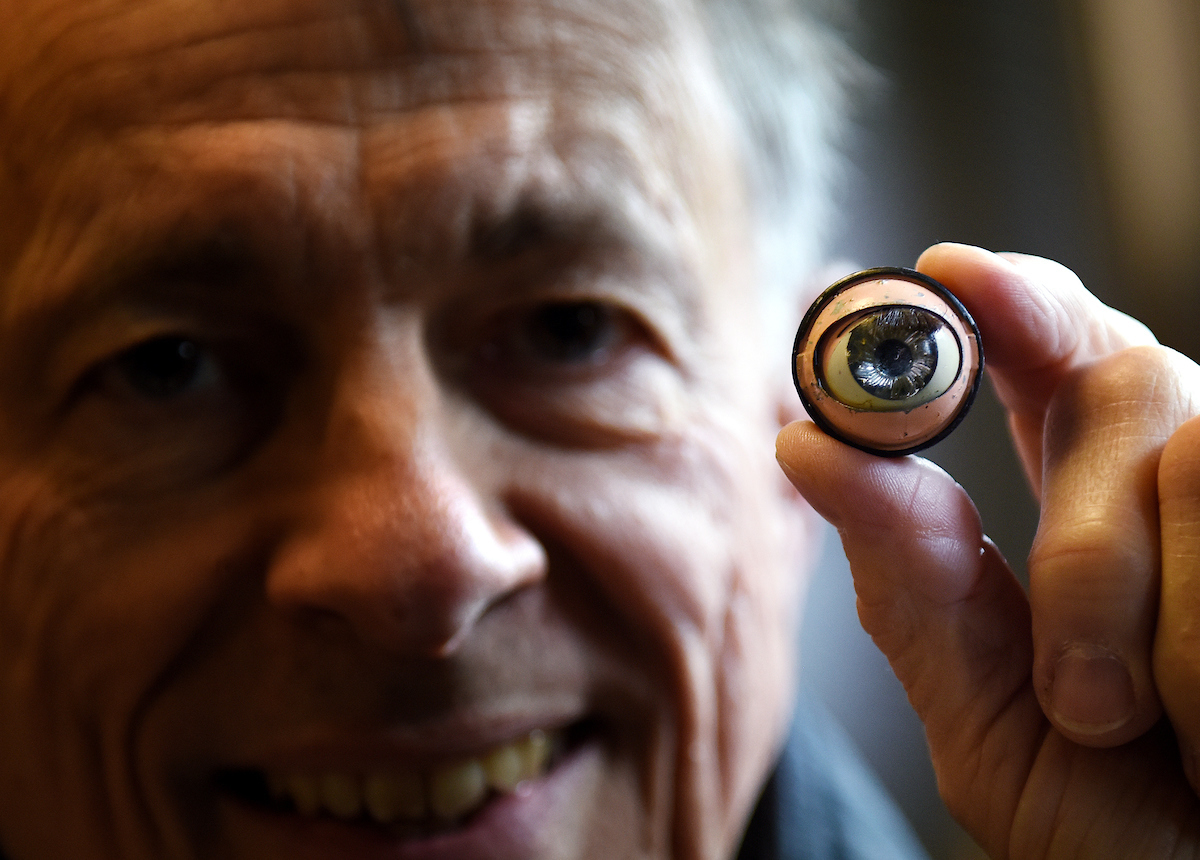 When he graduated high school in 1963, he headed off to St. Louis University, majoring in chemistry and pre-med. He went to medical school at Washington University in St. Louis.

And he studied hard, so hard some of the other students would tease him about it.

When he did his pediatric rotation, he fell in love with the newborn ICU. It was tiny, with nine Isolettes right next to one another.

“I loved the action and I loved taking care of sick patients,” he says.

He completed his residency at St. Louis Children’s Hospital before coming to Riley in 1973, where he spent a year before heading off to Denver to do research.

All the while, Dr. Schreiner couldn’t get those tiny babies out of his mind. He really wanted to be a clinical neonatologist.

At the time, the field of neonatology was so new. There were just a handful of specialists in the nation. 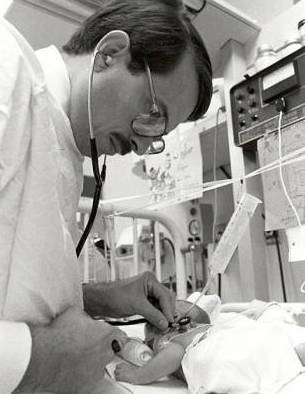 No surprise, with his work ethic and incredible clinical touch, Riley wanted him back. In July of 1975, Dr. Schreiner walked into the doors of Riley as a full-time physician – and he never walked away.

“All I did was take care of patients and teach,” he says.

Dr. Schreiner never ever gave up on a sick baby, even when it seemed like there was no hope.

The baby had been born outside the uterus, a devastating outcome. Then, his bowels ruptured.

The textbook teachings were clear: Surgery wasn’t likely to save the newborn. The outlook was grim.

But Dr. Schreiner wasn’t so sure. He decided to send that baby to the operating room.

Every Christmas since 1975, the year that baby was born, Dr. Schreiner has received a card from that baby’s father. The message is always the same. An update. And a thank you.

“Thank you for saving my son’s  life.”

It had to happen. A beloved, skilled neonatologist like Dr. Schreiner, he was going places.

In 1987, Dr. Schreiner was named Riley’s Physician-In-Chief and Chair for the Department of Pediatrics. Everyone around him thought he would be perfect for the position.

Dr. Schreiner? “I wasn’t as interested in being a manager as I was in caring for sick babies,” he says.

But under his leadership for the next 22 years, Riley’s pediatrics department became one of the best in the nation. As the hospital grew and revenue increased, Dr. Schreiner used the money to build research and educational programs. 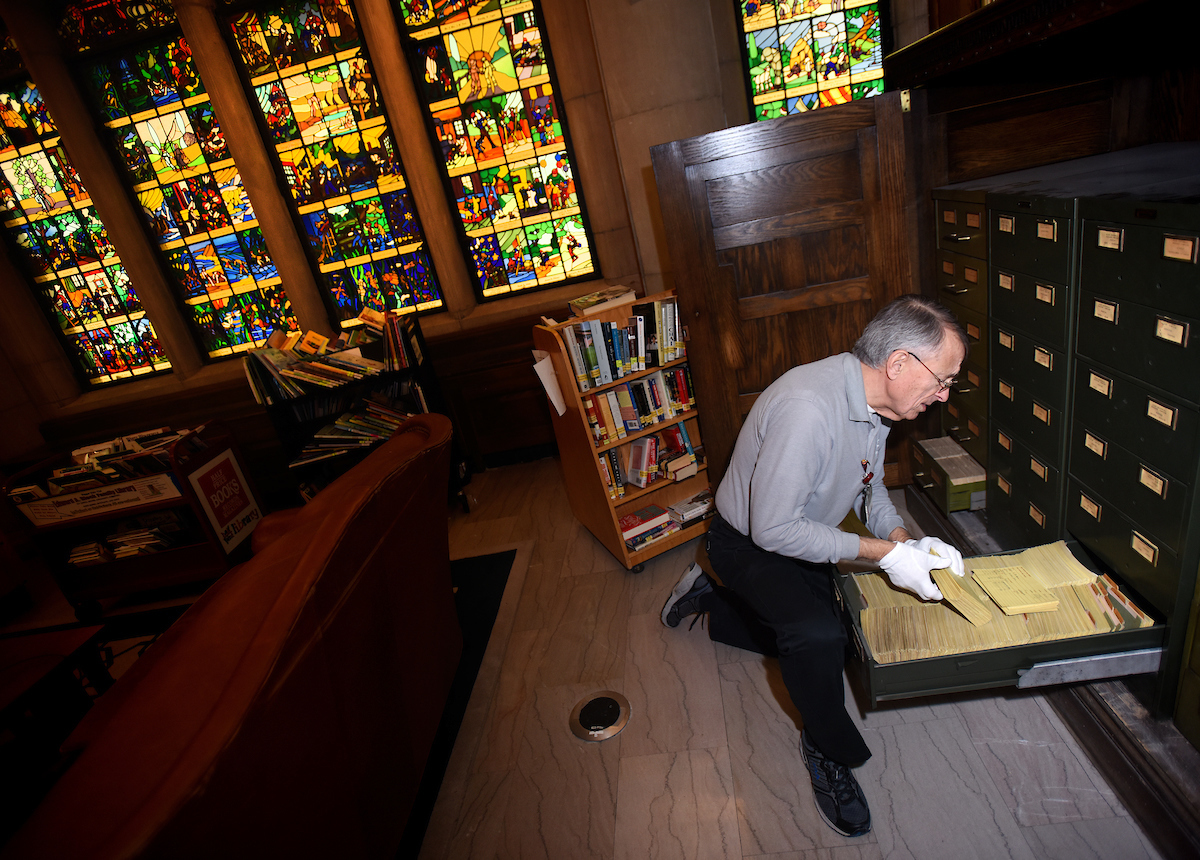 Among his accomplishments, Dr. Schreiner built the department from 40 faculty to more than 230, from 60th in extramural NIH research funding to 17th, from no endowed chairs to 22, from 30 pediatric residents to 150.

“He did this without a business plan or a mission statement,” says Dr. Lemons. “He did it around his passion for providing the best care possible for all children.”

One morning, years ago, Karen Bruner Stroup walked into Dr. Schreiner’s office. Stroup worked as a researcher in the Automotive Safety for Children Program at Riley.

Dr. Schreiner handed Stroup a booklet from another children’s hospital to read about their safety store.

“You might want to check this out,” he told her, “could be something we could do here.”

And he was right.

“It helped -- knowing that he was behind us -- as we moved forward to create the nation’s first children’s hospital-based Safety Store serving all children, including children with special needs,” says Stroup.

Encouraging. That might just be Dr. Schreiner’s ultimate descriptor.

To him, every person matters. Every single person. And each should be treated with the same respect – and encouraged.

When Dr. Schreiner stepped down as Chair and Physician-In-Chief of Riley in 2009, the hospital felt the void.

But, lucky for Riley, Dr. Schreiner is still a part of the hospital. And he always has words of wisdom to hand out.

“Remember you are there to help other people,” he says. “You aren’t there to pat yourself on the back. If you just spend your life helping other people, you’ll he happy and successful. That’s really all it takes.”