The former Colts linebacker has been through devastating loss. He gets it. And he wants to ease the pain, in any way he can.

He does it for kids like Conner West, who ambled through the hospital halls Monday in a light green gown, a mask covering his face, silent from the fear. 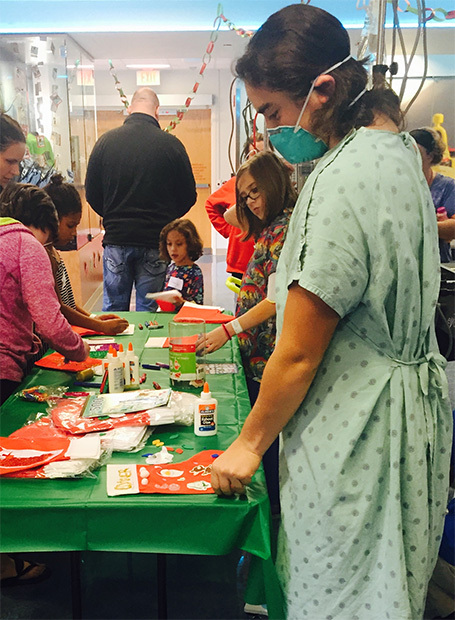 He does it for Conner, a 16-year-old football player who can't begin to comprehend how his life has changed. Less than a week ago, Conner was feeling tired, low energy. He had nagging headaches but, as his mom said, "nothing major." Nothing to raise any medical red flags.

Less than a week ago, Conner thought maybe he had a virus.

"Leukemia," said Conner, a defensive end for Huntington North, inside Riley Hospital for Children at IU Health. "I'm getting chemo, spinal taps. I have to take a bunch of pills."

Conner is only five days into his diagnosis. He is quiet, leaving those around him to wonder what devastating thoughts are racing through his mind.

And as Conner stood at Riley, living his fifth day as a cancer patient, former Indianapolis Colts linebacker Gary Brackett was there, too. With a hand on Conner's shoulder, lightening the mood, asking him about football. Brackett was there for a Riley party he was hosting, to decorate cookies and stockings with the kids.

Brackett does it all, the hours with patients, the donations of toys and books and games to Riley, he does it for Conner and every other kid like Conner, scared and facing a life-changing diagnosis.

But he also does it for a young man named Greg. Gregory Brackett.

"I know what it's like to have cancer. I've been in hospitals a lot. I know how scary it can be," said Gary Brackett.

Yes, for Brackett, giving back at Riley is about his brother Greg, who died of leukemia a decade ago. Who died after a bone marrow transplant, using Gary Brackett's marrow. His giving back is about the journey Gary took with his brother that opened his eyes to a whole new world of suffering and sadness. It's also about coping with the loss.

"The greatest way to honor the dead is how you continue to live," Brackett said. "For me, he is still alive if I'm still honoring his legacy and I'm still giving back."

It was early summer of 2003 when Greg Brackett went to the doctor, uncomfortable with chest pains. Blood tests revealed this wasn't his heart. This was leukemia. Chemotherapy and hospitals would be his life.

Gary Brackett, freshly minted as a Colts player was living the dream in Indianapolis, even as his brother suffered in their home state of New Jersey. It was a bittersweet time.

Then, as the Colts prepared for minicamps in spring of 2004, Brackett was told the chemo hadn't stopped his brother's cancer. He would need a bone marrow transplant. Gary was the only Brackett sibling to match Greg.

Instead of making it to camp to prepare for the upcoming NFL season, Gary Brackett spent his days preparing for the transplant, injecting drugs into his stomach. The result was like having a never-ending case of the flu.

But that wasn't the worst. What was worse than the pain and nausea of the surgery was Brackett's days in the New Jersey hospital, where his brother was a patient.

"The real sad part was I saw so many children and kids inside their rooms and, unfortunately, they were alone," Brackett said.

He didn't like that. He soon learned that for some kids, the hospital was their home. They had been there for months and their families couldn't always be with them. Brackett started thinking then: "If I'm ever able to give back, it will be at hospitals where people and kids are living with chronic, life-threatening diseases."

So there he was Monday, doing just that at Riley.

"Gary being here, it definitely brings some extra memories to kids and families who are dealing with often chronic or severe illness," said Paul Haut, M.D., chief medical officer at Riley at IU Health. "Just to be able to brighten their lives in some unexpected way is really powerful."

But to have Brackett who has been in a similar situation? That's even more powerful, said Dr. Haut.

"Having someone of Gary's stature recognizing the situation that these families are in also is reassuring to them," Dr. Haut said. "Letting them know that they are not doing this alone, even though we take a family-centered care approach here and they have all kinds of team members helping them? Outside recognition is just as helpful."

"If this can just ease the pain a little bit while they're in the hospital, give them something to do," Brackett said.  "Then hopefully I play a little part in something great."

Conner stood at the table Monday putting  Santa Claus stickers on his stocking. Not exactly what a 16-year-old kid might have picked to be doing given a choice. But in the hospital, with leukemia on his mind, this was a welcome distraction.

And then there was a better distraction.

"So you play football too?" Brackett said to Conner, as a smile spread across his face.

Yes, he does play football. And he will again. Brackett is sure of it.

A Look at a Leader: Marge Crouch

With so many initiatives that focus on the patients at Riley, Marge recognizes the need to care for the parents. That's why she created the parent comfort cart.

The Man With a Magic Castle: How Riley Volunteer Bob Baxter Changes Lives

Bob Baxter volunteers at Riley Hospital by rolling around a Magic Castle full of toys for children.