She wasn’t expected to live, but now Hazel goes home

“I’m telling you, if any NICU baby needs some tips, Hazel could give classes.” 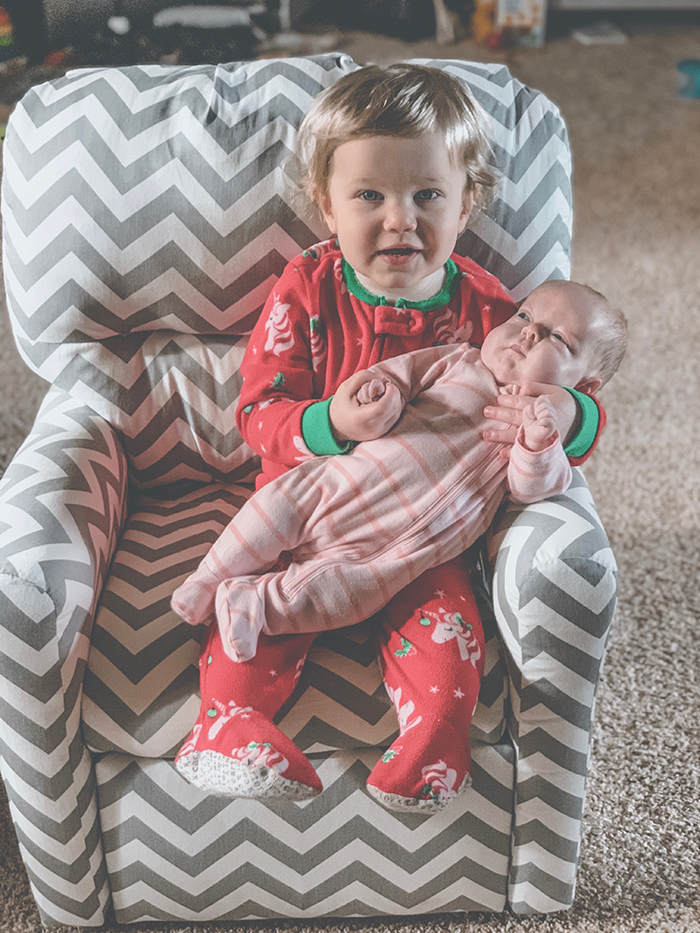 Hartley Smith loves her new “baby doll.” The 19-month-old has not quite grasped the fact that her “doll” is actually her baby sister, but she loves cuddling the infant and helping her mom with her care.

That baby doll is Hazel Smith, and she came home from Riley Hospital for Children at IU Health last week. It was her first time out of the hospital after being born two months early at IU Health Methodist Hospital.

Her birth on Dec. 17 was nothing short of a miracle to her parents, Calvin and Ashley Smith, who feared their baby might not survive because of a rare pregnancy disorder.

And yet, here she is, a wiggly, cuddly 8-pound baby, who came home to southern Illinois without any supportive medical equipment – no machines, no tubes, no wires.

“She has blown every expectation out of the water,” said Ashley, who spoke on the phone while Hartley napped and Hazel nursed in her arms.

“I’m telling you, if any NICU baby needs some tips, Hazel could give classes,” she added. “This little girl is incredible.” 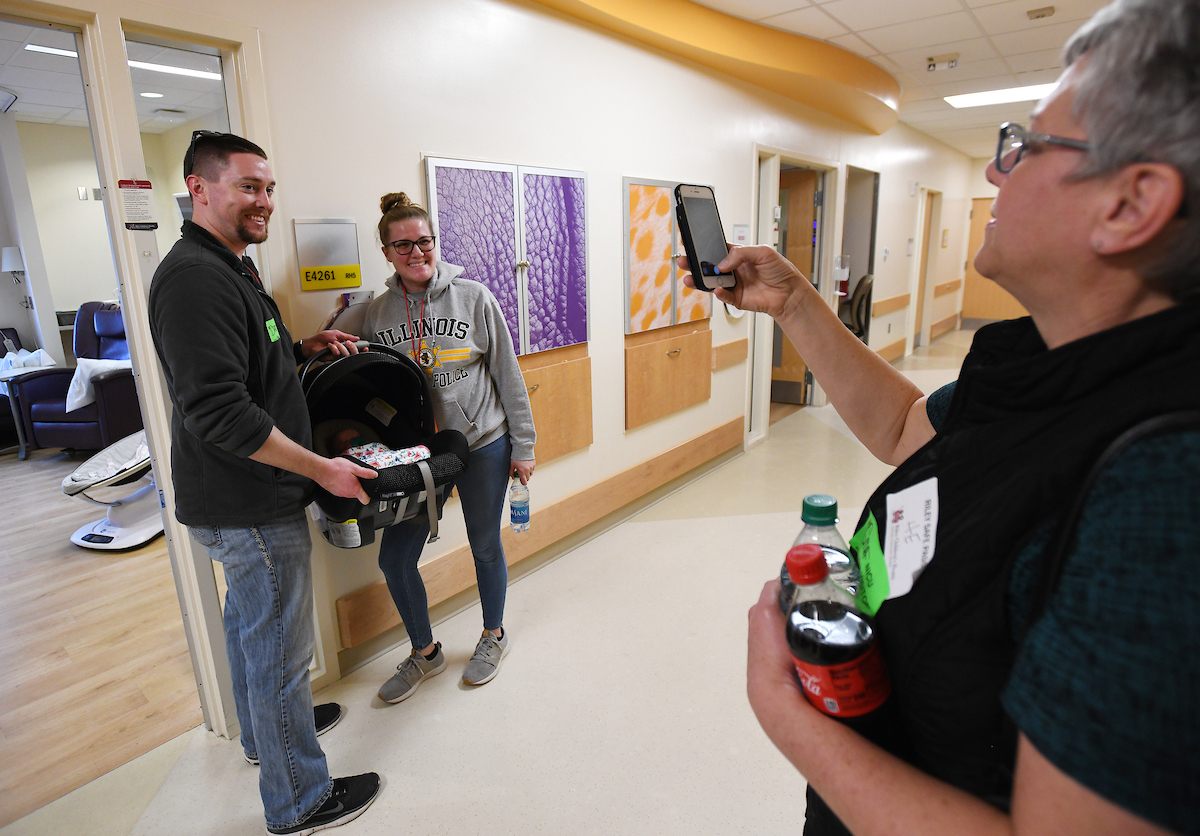 Hazel came home on just a couple of medications – drops for her nose after she had nasal surgery and a blood pressure medicine. She is breathing and eating on her own. And she’s sleeping like a champ, her mom said.

Just a couple of days after she had her breathing tube removed last month, she was introduced to breast feeding, which went “swimmingly,” Ashley said. “She just took to it like she’d been doing it forever. She had no problems.”

Soon after that, they introduced the bottle, and she immediately took to that as well.

All of these milestones are impressive because the Smiths’ little bean of a baby was not given good odds in utero. First, the couple was told by doctors in Evansville that the fetus had a rare chromosomal abnormality yielding an extra set of chromosomes in the cells. Babies with this condition typically might survive outside the womb for a few hours up to a few months.

Further tests revealed their baby did not have the extra set of chromosomes after all.

The couple came to IU Health for more answers last fall. Turns out, Ashley was experiencing what they believe was a partial molar pregnancy. In a total molar pregnancy, the fetus does not develop at all. It usually occurs when an egg that does not contain any genetic information is fertilized by a sperm. 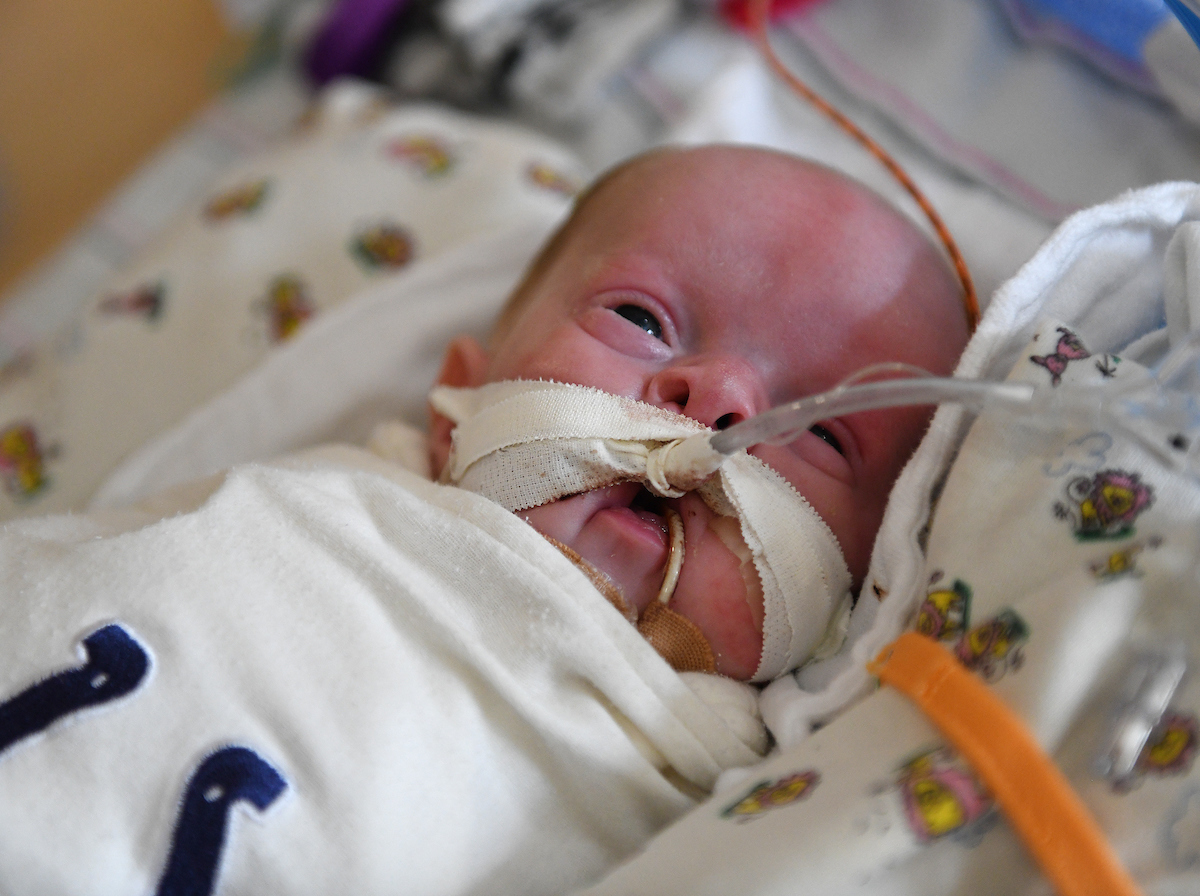 Hazel was one of those miracle babies.

“The amount of care and attention we have gotten from Methodist and from Riley … we were just so blessed to have every team that was part of Hazel’s care make her number one,” Ashley said. “When they walked into her room, there was no other baby they were thinking about. They weren’t in a rush to get out of there. ENT (Ear, Nose & Throat) came by every day after she had her surgery. They didn’t have to do that, but that’s just how awesome they are.”

Hazel will return to Riley several times in the next three months for appointments with various specialists to ensure she is developing appropriately, but her mom is convinced the infant has everything under control.

“We have no idea what this little girl is going to be up to,” she said. “We think we do and then she just tells us differently.”

Read More:
“Babies are miracles, and she is the biggest miracle of all” - The woman’s pregnancy was so rare doctors were baffled, but Ashley and Calvin Smith’s preemie daughter is proving the doubters wrong.