Riley physician has been named a Mental Health Champion

He once contemplated suicide. Now Dr. Adam Hill leads efforts inside and outside the hospital to focus on mental wellness. For his own recovery, he said, “I’m thankful every day.”

Dr. Adam Hill will share his story with anyone if he feels it will help.

The division chief of the palliative care team at Riley Hospital for Children at IU Health has been open about his struggle with depression. Because of that, he has been named a Mental Health Champion for helping to normalize the focus on mental wellness.

Dr. Hill is among a group of Mental Health Champions from different walks of life around the country whose stories are appearing as part of a series in publications including Thrive Global, Authority Magazine and BuzzFeed.

“It’s a special honor to be recognized,” he said after his story was published last week. “I hope it continues to shine a light on individuals who are living, working and thriving but still have ongoing mental health needs like so many people in the country. It helps to take away the shame and destigmatize mental health conditions when we can highlight positive role models that struggle or have struggled but find ways to live well.”

Dr. Hill, a husband and father of two young children, has learned to live well. But it has taken hard work, raw honesty and humility to get there. He details his descent into despair and how he climbed out in the 2017 New England Journal of Medicine article, “Breaking the Stigma: A Physician’s Perspective on Self-Care and Recovery.”

After years of living with depression, he said he began abusing alcohol “and in a rapid downward spiral (I) became actively suicidal with a plan to end my own life. Out of the darkness, I found a road to recovery, and over the last three years have been blessed to share this journey with other people struggling with their own mental health.” 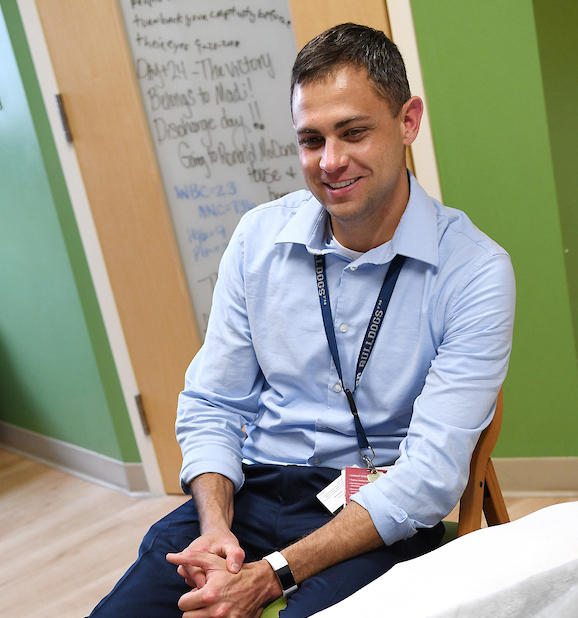 At this point in his recovery process, which has evolved over eight years, he said he’s in “a good space” but continues to get counseling and rely on his support system. He also travels the country to speak about his experiences and put a face on the problem.

In the Thrive Global article, he talks about the fact that the stigma surrounding mental health persists “because as a society we continue to look for superficial, convenient answers in a complex world of human beings.”

“The fact that 20 percent of the U.S. population suffers from mental health conditions, and we continue to stigmatize them, is a cultural failing of empathy.”

Dr. Hill, who recently founded “Compassion Rounds” at Riley to help team members process deep emotions surrounding grief, trauma and loss, believes he is a better physician because of his illness, not in spite of it. He can’t help but have more compassion, more empathy.

“It gives me a whole new perspective of living with mental illness and what it feels like to be sick. I never pretend to know what it’s like for other people and what they’ve been through, but it opened my eyes to know that I should be patient and present and listen and try to understand where people are coming from,” he said.

Having children also opened his eyes to the importance of being open about his mental health. He wants his kids to live in a world where they’re not afraid to talk about medical conditions for fear of being bullied, shamed or judged. “I feel a greater calling to do that for their future.”

The other day, he found his 3-year-old son “reading” to his younger sister out of the AA Big Book that Dr. Hill keeps at home. That’s what he means about being open and honest with his family, his colleagues and even strangers about mental health.

In the face of an ongoing epidemic of medical distress, suicide and untreated mental health conditions, he said his goal is to normalize the conversation by sharing a new perspective and presenting himself as a positive role model of a successful physician with his own story of recovery.

Dr. Hill credits IU Health and Riley Hospital for supporting him in his journey.

“I have had the opportunity to travel and hear people’s stories from all over the country, and I do feel really blessed that I have leadership and colleagues and so many people on a daily basis who make me feel comfortable and safe to allow me the opportunity to speak and to be acknowledged for achievements like this. It wouldn’t be possible if I didn’t live and work in a space that valued and appreciated me for who I am. I’m thankful every day.”