The year was 1948 and Mellie Cravens was the director of visitors at Riley. She wrote about what she saw inside the hospital on the pages of a tiny, leather book.

Her name was Mellie Cravens or, as she preferred to call herself, Mrs. John W. Cravens. And she was a feisty, emotional, deeply intense woman.

She was the director of visitors at James Whitcomb Riley Hospital for Children during the 1940s. Cravens sat inside the hospital at the front desk.

She watched as the children came and as they left. She watched the parents – some wonderful and some dreadful.

She visited the units and saw the “crippled” children. She went into rooms and saw the patients who were happy just to be in loving care – a different kind of care than what they were used to.

And what she saw, Cravens wrote about. She wrote the stories of Riley inside a tiny, leather-covered book she carried with her everywhere she went.

“This is what she would use as she went around the state and talked about Riley,” says Dr. Richard Schreiner, former physician-in-chief at Riley and the hospital’s official historian. “This is the little talk that she gave. It’s just incredible.” 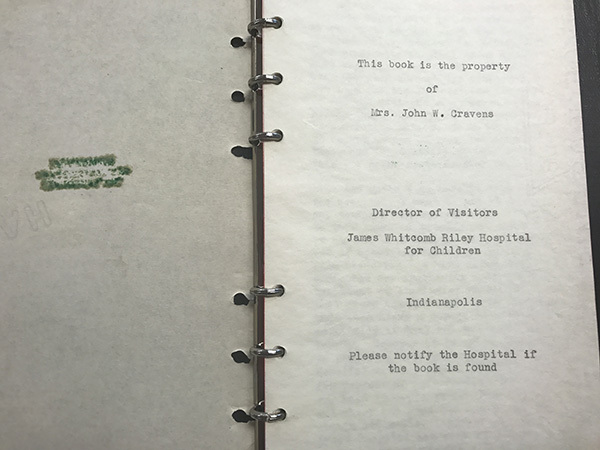 Incredible for sure. There is the usual fodder in the book -- the history of the hospital, some little known facts about Riley the man, some bits and pieces of his poetry.

But there is also the unbelievable, the tales Cravens tells of what was happening inside the hospital in 1948.

The book was precious to Cravens. On the cover page, she typed: “Please notify the Hospital if the book is found.”

We read through this book and pulled out some excerpts written in Cravens’ own words.

From Where She Sat

“Across from my desk at the main entrance of the Riley Hospital, there hangs an oil portrait of (Riley)…And Riley smiles down on the procession of children who pass by his likeness daily. Some limping slowly, some in cumbersome casts, some with bandaged eyes, some being pushed in carts, some with arms extended in angle splints, some guiding their own wheelchairs or those of their neighbors, some spastics being carried. Just the daily routine of patients on their way to pool or school or X-ray or clinic. That parade may give you a sort of a kind of a bad moment. But just keep in mind that each child is in the hospital to be helped, that the tragedy happened before he got there, and that he may be receiving something he otherwise might not have chanced upon – skill, kindness, happiness -- at least for a time, and that often there is the reward of complete recovery.”

“Sadness in the eyes of a child is a hard thing to watch day in and day out. Sadness in that too old, too all knowing expression which is not always the result of physical handicap, but often due to the most unbelievable home conditions. Conditions which they learn so pitifully young to guard and cover up. For example, the case of the small patient brought in with severe burns on arms and legs. ‘How did this happen?’ someone of the staff asked. In a most detached, bored and impersonal manner and with a deadpan expression, the five-year-old replied: ‘Oh, my Pop threw the coffee pot at my Mom and it spilled on me. Say, could I have one of those yellow balloons?’ He had his own shrewd way of discouraging additional questioning. That boy had to learn how to smile. Life had been just that tough for all of his five years.” 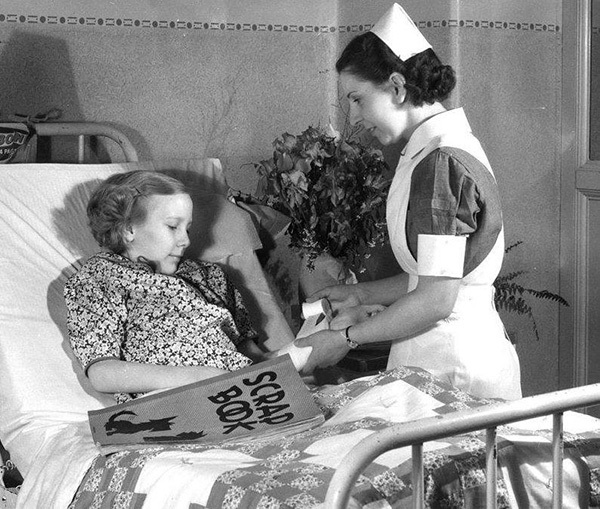 “For many of the patients, cleanliness and order, cheerfulness and regular meals, the blessed relief of having no quarreling all about you, no rasping, angry voices jarring your every nerve, no endless nagging. Just blissful peace in which to fight your way back to strength, or at least to lie in quietly when you are just too weak to lift a hand and all in this world you want is silence --guarded silence. With clean covers over you and something wholesome to look at when you do choose to open your eyes, say, for instance, a pink ginghamed and white aproned student nurse smiling at you.”

“May I present for the human interest touch the case of the oversized man in the overloud plaid clothes and the shabbily dressed and pretty, hard-looking young woman accompanying him. He preceded her through the door of the Riley and up to my desk, and then jerked his thumb in her direction, indicating that all the talking would be taken care of by the lady. And, she leaned over my desk most confidentially and began in tones intended for the wide-open spaces: ‘Honey, you see it’s like this. Me and him has been separated, and while he’s been away why the Welfare they come and took our kid away, because he’s sickly. Now, him and me are going back together again, and we want to get our kid out of here.’ And that father mumbled something about the kid being better off in his own home. Some days later I saw that family group leave the hospital. And I walked over to the window and watched them go down the walk. Father yanking that frail child one way, mother the other. Child trying to go both ways at once, looking at neither one and with no visible interest in anything at all. Just going back to trouble, boil and bubble. Not a chance in the world for that rheumatic heart, and exactly as much for an opportunity to live out the brief span of years in peace. And I entertained some wholly unorthodox thoughts -- not official but very personal, remember. For every day I am growing more keenly conscious of what some children in Indiana have to endure in the way of parents.”