In the Simon Family Tower at Riley Hospital for Children at IU Health, Dr. Richard Schreiner poses awkwardly next to a bronze statue of himself. It’s certainly not the first time he’s been asked to stand for a photo, and it won’t be the last. 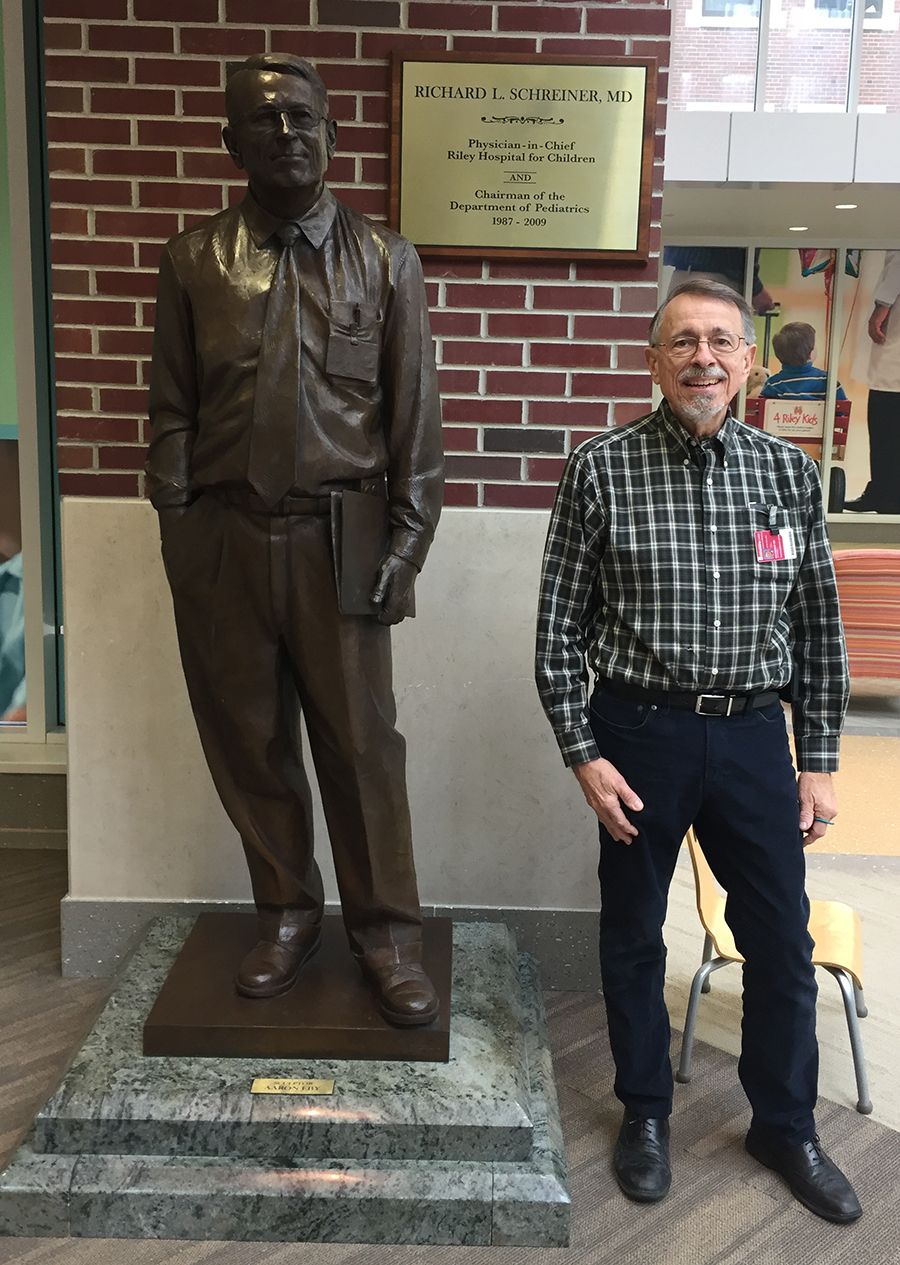 Schreiner, former chief of Riley and chairman of the Department of Pediatrics for 22 years, didn’t know the statue was in the works when he stepped down as chair in 2009. They unveiled it at his retirement party, though the longtime physician continues to keep office hours in the Riley Research Building.

“One of the (staff) said it’s a little buffer than I am,” Schreiner said good-naturedly as he stood next to the life-size bronze version of himself.

This was the last stop on a 2 1/2-hour tour of Riley, led by the physician to share bits of history that he worries might be forgotten in time.

After a 45-plus-year career at Riley, Schreiner is considered by many to be its biggest champion. He knows its history better than most, though he gives most of the accolades to Karen Stroup, who serves on the Riley Hospital Historic Preservation Committee.

In his office is a treasure trove of memorabilia – old photos, books and publications documenting the history of Riley, which opened in 1924. The hospital, named for Indiana poet James Whitcomb Riley, was dedicated on Oct. 7, 1924, the anniversary of the poet’s birthday. Riley died eight years earlier.

The dedication day began with a parade through Downtown Indianapolis, partly because the hospital was built with public funds and private donations. Indiana residents were invested in the children’s hospital, at the time one of only about a dozen in the nation. Forty-four thousand Hoosiers gave what they could to finance construction. 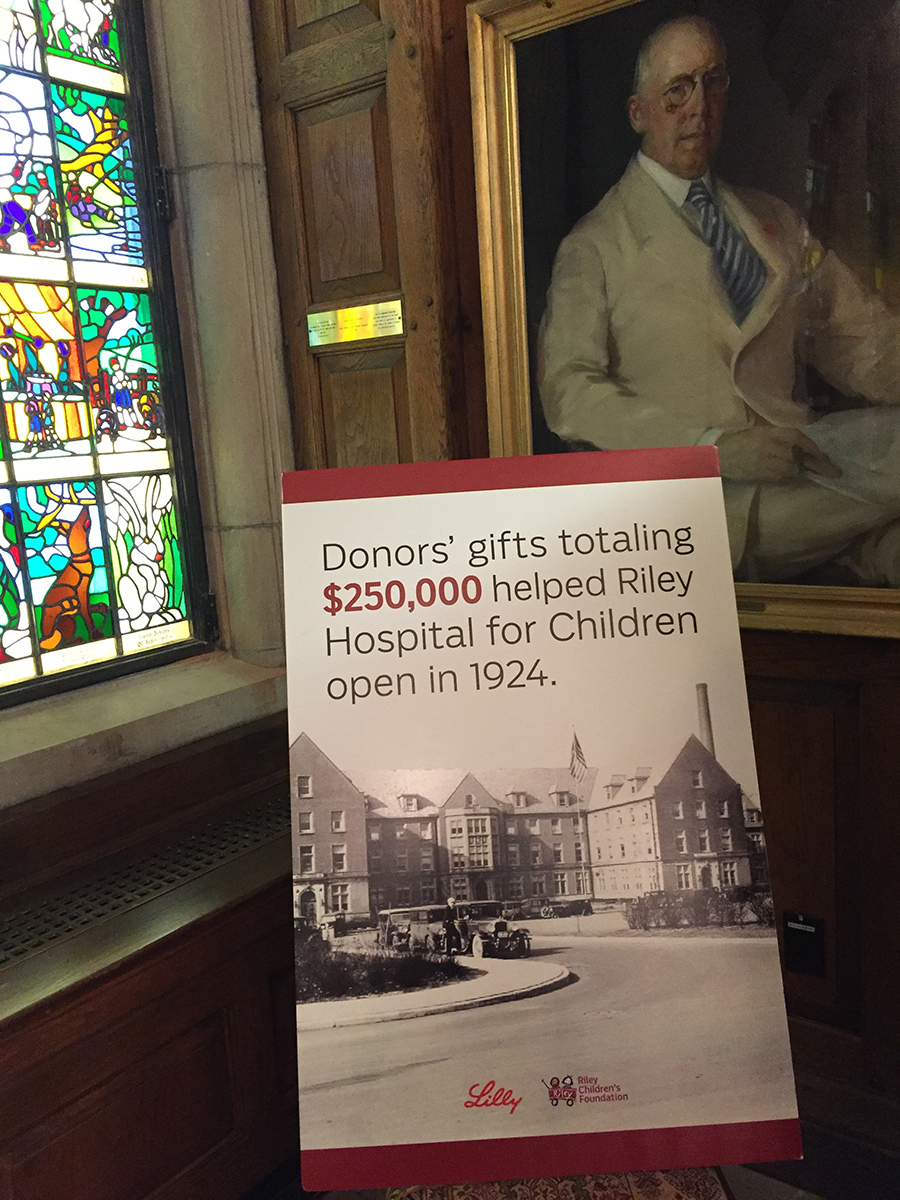 Evidence of that is found in a glass case in the corner of the Riley library filled with index cards on which donors pledged their support.

The library happens to be Schreiner’s favorite place at Riley. That’s because it houses the original entrance to the hospital, where parents dropped off their children for treatment, sometimes leaving them for months at a time. That was before the implementation of family-centered care in the 1960s by Dr. Morris Green, longtime chief who retired in 1987 and died in 2013.

Green was a man ahead of his time, Schreiner said. “He invented family-centered care before there was even a name for it.”

As he continues leading the tour, Schreiner shares tidbits about beloved staff, patient stories from decades ago and famous visitors, including former President Franklin D. Roosevelt, who visited the hospital’s polio ward in 1936. Roosevelt contracted polio in 1921 but would go on to be elected president four times.

Schreiner is on a mission to have as much of the hospital’s history saved or recorded as humanly possible, but he admits that wasn’t always the case. “I never paid any attention to this stuff until I retired.” 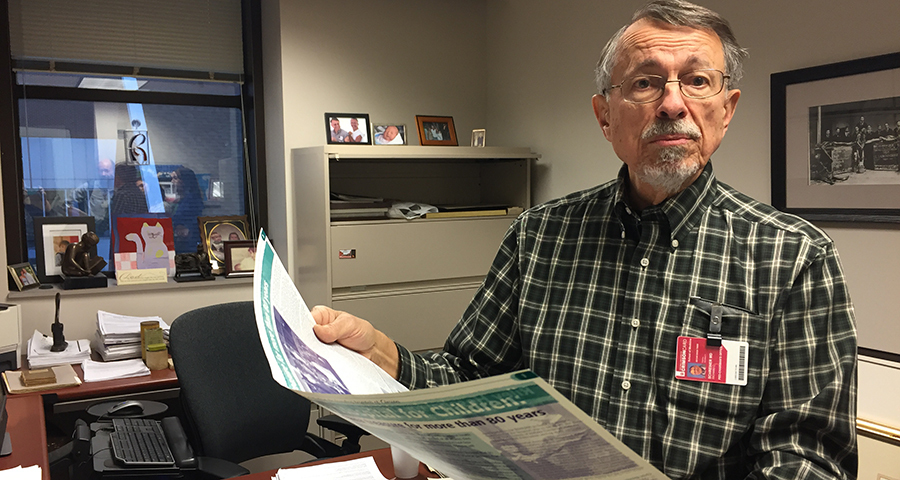 So now when you visit the Simon Family Tower lobby and see the bronze likeness of a man with one hand in his pocket and a gentle smile on his face, read the plaque behind it and appreciate one more piece of Riley’s 95-year history.