Indy’s First Quadruplets: Baby No. 3 Just Had Twins And Is A Nurse At Riley

Laura Koke never forgot the nurses who took care of her at Riley as a little girl. And she vowed from the age of 5, she would be one of them some day.

As a little girl, Laura Koke’s favorite book was “Jenny’s In The Hospital.” It was about a little girl who breaks her arm and ends up in the hospital. On the cover of the book is a kind, sweet-looking nurse taking care of Jenny.

Inside Riley Hospital for Children at IU Health some of those same kind, sweet nurses took care of Koke when she was born in 1983 and for years after.

Koke is one of Indianapolis’ first surviving set of quadruplets – the Taylor quads born at IU Health University Hospital and cared for at Riley.

Growing up, Koke had the most health issues of the four. She was hospitalized, on occasion, at Riley throughout her childhood. 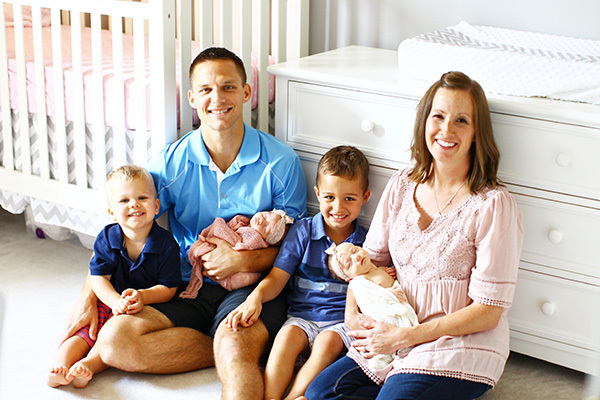 And those Riley nurses always stood out to her. They were magical. They made her feel so special. By 5 years old, Koke knew she wanted to be a nurse. And she knew her dream was to be a nurse at Riley.

“I never wavered,” says Koke, a married mother of two boys, and 3-month-old twin girls. “I know it was my exposure at Riley and how the nurses made me feel better that led me to that.”

Now 34, Koke is a nurse at the Center for Pediatric Cancer and Blood Disorders at Riley. It’s the outpatient oncology and hematology unit.

“The patient population, watching it is heartbreaking but it’s so rewarding at the same time,” says Koke, who has worked on the unit more than eight years. “Kids are so resilient. Their parents are so resilient. I just feel like it’s a calling. And if you’re called to do it, it doesn’t feel like a job. You’re meant to be there for those families at that time.”

Koke came to Riley nearly 10 years ago, starting in the pediatric intensive care unit. She says working at Riley gives her perspective on life and what she is blessed to have.

Riley is blessed to have Koke. She is a standout nurse, awarded in 2016 with the Margaret Martin Award. The honor is given to one outstanding bedside nurse each year and is Riley’s most prestigious nursing award. 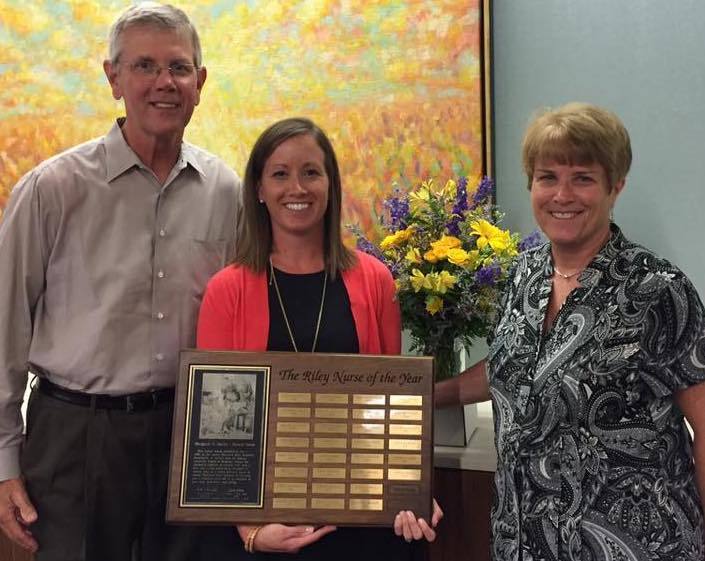 “That is still the biggest honor I have ever received in my career,” Koke says.

So, even after having the twins, Madelyn and Eleanor, in June  -- and 5-year-old Nolan and 3-year-old Emerson at home – staying on at Riley was a must. Koke started back this month.

“Not going back to work was not an option because I love what I do so much,” says Koke. “It’s a part of me.”

Growing Up A Quad

Koke and her fellow quads were born on June 9, 1983 -- 10 weeks early -- to Phil and Theresa Taylor at IU Health University Hospital.

This was the first set of quadruplets born to an Indianapolis family.

“Back then, it was a big deal,” Koke says. Only one other set of quads had been born in the state of Indiana. Newspaper reporters were clamoring for information.

The hospitals – University and Riley -- had been preparing for weeks for these Taylor quads. There was a booklet 29 pages thick, titled: “The Taylor Quadruplets: Information for the News Media.”

Five teams, each including a physician, nurse and respiratory therapist, were formed and kept on call all those weeks.

And that booklet outlined it all, giving details on the family’s background, the pregnancy and preparations for the birth. A special telephone number was set up for recorded updates on the babies’ conditions. 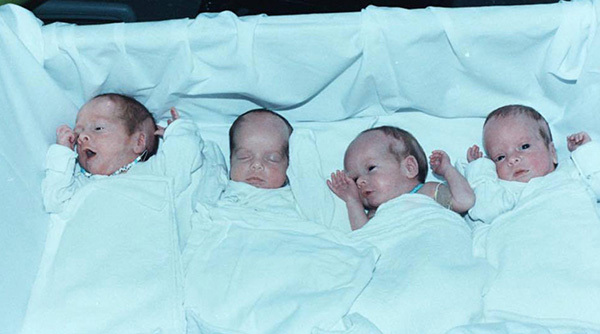 At home, they had an older sister who was two years old.

“The amount of bottles my parents had to go through is just crazy,” Koke says. “When we came home, we ate every three hours and it took two to feed us.”

Koke can’t say enough wonderful things about her parents. Without them, she says, none of her siblings would be who they are.

“They supported us every step of the way,” she says. “They made us feel like individuals.”

And now, as a mother of multiples herself, Koke says she is thinking about all the things her mom and dad did.

“I think being a multiple will give me a unique perspective to raising multiples,” Koke says. “And hopefully, because of what a great job my parents did with us, I will have that to lean on as we raise our twins.”