Her life’s work has been with Riley burn patients

“It’s kind of surreal, but forty-four-and-a-half years is a long time, and who gets to work with people you love doing what you love for that long? I am grateful, but I am also tired. I will miss the people in this hospital so much. I’m just so incredibly proud of them.”

The retiring clinical manager of Riley Hospital for Children’s burn unit would have preferred to slip out the door quietly after 44 years on the burn unit team. But she knew too many people – and they weren’t going to let her leave without a party celebrating her service. 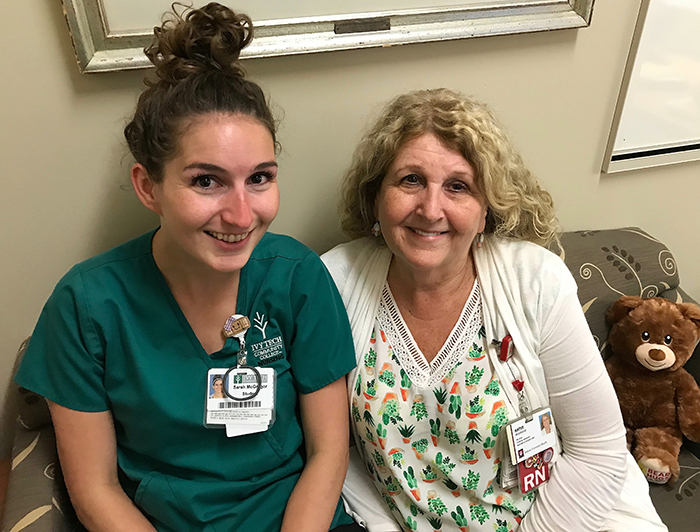 McGregor’s last day on the job was July 10. Her daughter, Sarah, a nursing student and patient care aide at Riley, stopped by her mom’s office one last time that day to lend her support, but it was Sarah who couldn’t stop the tears.

“My eyes are leaky for some reason,” she said as her mom gave her a hug. “This is our last day at Riley together. Who’s going to bring me lunch?”

She was joking (maybe) about lunch, but the emotion was genuine. The two are very close. As a teenager, Sarah took care of her mom when the older woman had cancer.

“It scares your kids when you get cancer,” McGregor said. “She never thought about being a nurse until that happened.”

That was 11 years ago, when Sarah was a senior in high school. Her older brother Matt was a student at Purdue University at the time, so she was the designated caretaker at home.

Now her brother is married and has two kids, so it’s Sarah and her mom again at home.

McGregor couldn’t be prouder of both her kids, and she’s crazy about her two grandsons, ages 5 and 2. Knowing she can spend more time with them makes the idea of retirement sound pretty sweet.

But it’s the family she has at Riley that she is sad to leave.

“This is such a fabulous team, and they work so well together for the good of patients and families.”

The job isn’t for everyone, she said. She’s told the same thing to hundreds of nurses she has interviewed over the years.

Burn unit nurses are a special breed. McGregor never wanted to do anything else, once she read a newspaper article about Riley’s burn unit when she was in high school. 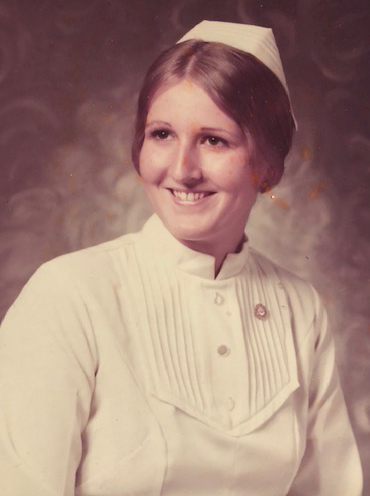 As a nursing school student in Elkhart, Indiana, in the 1970s, she cared for a 14-year-old burn patient who was in the hospital for months. Word got around the hospital that she was pretty good at it and she was called to assist with burn patients in other departments.

When she came to Riley, she worked for a time in the PICU, but the burn unit was where she wanted to be, and within a few months she was. She never left.

She worked as a bedside nurse – with revered Riley nurse Margaret Martin as her mentor. Slowly, she took on more duties – head nurse, unit director, unit manager, clinical manager – but she still cared for patients as needed. She cared for her team too.

“I didn’t ever want to be a leader or manager, I just wanted to take care of burn patients, because not everyone can,” she said. “It takes special skill, knowledge, caring and patience. I learned that very young, but one of the nice things about being here so long is being able to create this amazing team and be a part of this team. The nurses here love taking care of burn patients.”

There are 30 team members in the 10-bed burn unit, all of whom McGregor hired. In fact, she’s been at Riley longer than anyone else on the team.

“They offered me a $500 sign-on bonus when I first started at Riley, but I had to stay for a year. I wasn’t really sure about that.” She laughs at that notion now, looking back at all the advances she has witnessed and the people she has grown to love over four-plus decades.

“It’s kind of surreal, but forty-four-and-a-half years is a long time, and who gets to work with people you love doing what you love for that long? I am grateful, but I am also tired. I will miss the people in this hospital so much. I’m just so incredibly proud of them.”

And they will be fine when she’s gone, McGregor said. “There are so many natural leaders in this group. They are going to keep doing the wonderful work that they do.”

Many of those people were on hand for a group photo on her last day in the office, as well as at her party the next day. Despite her reluctance to be the center of attention, it was a good day, she said. She saw lots of friends she hadn’t seen for a long time.

“My out of work party is Saturday with many colleagues and my team,” she said. “I’m very excited. I’m spoiled.”

Dozens of current and former co-workers and patient families weighed in on a Riley social media post last week that announced McGregor was retiring. Here are a few of those comments:

“You inspired loyalty and greatness in your nurses. You will be greatly missed.”

“It was an honor to work with you.”

“Enjoy your well-deserved retirement. Thank you for all the amazing care you took of all those sweet children!”

“You have made a huge impact on nurses, patients and their families over your career!”

McGregor says she has learned plenty from her patients over the years.

“I’ve learned to be grateful for every day. To see their bravery … I get annoyed at people who complain about stupid things. These are just wonderful strong children.”

As she closes the book on her Riley career, McGregor is calling her next stage in life Chapter 3. She’ll do some gardening, cooking, traveling, volunteering and maybe even some writing. She’ll continue to serve on the board of the Hoosier Burn Camp, a passion of hers for 20 years.

“My list of things to do is pretty long,” she said. “I’m just going to stop for a while and take care of me.”

And one more thing: “I’m going to take a nap every day if I want to.”