Crystal Miller didn’t get her New Year’s Day baby, but she did deliver a beautiful baby boy in the pre-dawn hours of Jan. 2 in the Maternity Tower at Riley Children’s Health.

And for that she is extraordinarily grateful, especially considering her baby, Beau Ryan, required three blood transfusions while still in the womb.

The concept of doing surgical procedures on an unborn baby is hard to get your mind around. It was definitely a challenge for Miller and her partner, Kraig Bontrager.

“Going into this pregnancy, we didn’t expect this,” said Miller, who also has a 5-year-old daughter with Bontrager. “Getting the news from my OB that there was an issue and being referred to a specialist is very scary. Then to hear that they’re going to refer you to an even more high-risk specialist – it was kind of gut-wrenching.”

But the maternal fetal medicine team at Riley put the couple’s minds at ease as best they could.

Riley fetal interventionalist Dr. Hiba Mustafa, a fetal medicine subspecialist who focuses on diagnosis, intervention and surgery in the womb, first met Miller, whom she describes as “super sweet,” in October when Miller’s specialist in South Bend, Dr. Lori Day, referred her to Riley for more specialized care.

Miller, who lives in northern Indiana, was suffering from a condition called maternal RH isoimmunization. Basically, her body was producing antibodies that were interfering with the baby’s blood cell production.

Specialized ultrasound technology that measures the blood velocity in an unborn baby’s brain is used to diagnose anemia.

“The fetus protects the brain first, so when the fetus gets anemic, it shifts blood from its body and sends it to the brain,” Dr. Mustafa said. “That’s why when baby is anemic, the velocity in that vessel in the brain becomes really high.”

Left untreated, the condition can be fatal to the baby. Before the technology and the teams were both in place to do these procedures, surgeons often had to deliver babies early to prevent further harm to the fetus.

“Some of these antibodies can pass through the placenta to the baby and it breaks down baby’s blood cells and makes baby anemic,” Dr. Mustafa said. “The baby can go into heart failure and die if they don’t get a transfusion. So, we transfuse blood while baby is inside the uterus.”

As expected, it’s a very delicate procedure, the surgeon said, made even more difficult by the fact that Miller’s placenta was below the baby, rather than on top.

“If it’s on top, it’s more accessible. Her baby’s butt was always in the way,” Dr. Mustafa laughed. “You have to manipulate the baby to find your spot.”

Inserting the needle through the mother’s stomach into a vein in the baby’s umbilical cord is the first trick. Then doctors take a percutaneous umbilical blood sample to see how anemic baby is and calculate how much blood to transfuse.

The entire procedure takes about two hours, with Miller numb from the chest down.

“I can’t see what they’re doing, but I’m listening to three doctors working on me and the baby and they have a very small spot to work with,” Miller said. “How amazing and incredible is it that we have the technology and ability to do that to save babies.”

Miller’s baby required three intra-uterine transfusions, the first on Nov. 9 at about 27 weeks’ gestation. Others followed on Nov. 23 and Dec. 14.

It was a stressful time, Miller acknowledged, worrying about whether she would need the intervention and praying that everything would be OK.

“I will say I’m typically a very positive person, happy-go-lucky,” she said, but the worry was getting to her, aggravating her pre-existing hypertension, which doctors were closely watching.

“Kraig has been the one who’s been helping me stay positive, telling me it’s all going to work out. Having that and our amazing family checking in, praying for us, has been phenomenal. I feel extremely blessed to have the doctors that we do, the family that we do and that my body has been cooperating,” she said.

“We couldn’t have asked for better doctors than Dr. Day and Dr. Mustafa. We knew we were in great hands. The entire team at Riley has been extremely helpful, caring and just amazing.”

On Sunday, Jan. 1, Miller was induced at Riley and delivered 6-pound, 14-ounce baby Beau about 16 hours later. She got to hold him for a few minutes before he was whisked away to the NICU in the maternity tower, where he remained 24 hours later getting a little help with his breathing and nutrition through a tube.

But shortly after noon on Tuesday, when mom and dad took the elevator down to the third-floor NICU for the second time that day, they found their little guy off the CPAP (continuous positive airway pressure) machine and the feeding tube, revealing his perfect little face.

Miller teared up immediately as she looked at her baby, stroking his cheek and memorizing the details of his face and his tiny fingers.

“This makes me so happy,” she whispered as he lay sleeping. “Hi baby boy.”

Later in the day, Miller and Bontrager were thrilled when they were told that Beau was being discharged from the NICU to stay with them in their room at Riley before going home.

“I could not be more pleased with Riley Hospital and just everybody here,” the new mom said.

Dr. Mustafa, who earned her medical degree from the University of Baghdad (Iraq) College of Medicine and completed multiple residencies and fellowships, most recently at the University of Maryland, joined the Fetal Center at Riley Children’s Health in July, subspecializing in fetal diagnosis, intervention and surgery.

She is one of two fetal surgeons (Dr. David Streitman is the other) on the fetal intervention team, the only program like it in the state.

“You cannot have such a program with just maternal fetal medicine specialists. So many pieces have to come together. It’s way more than the surgeon,” she said.

“Because you have all these amazing and skilled people, it’s possible to have such a program.”

The Fetal Center at Riley Children's Health sees high-risk pregnant women and newborns. Learn more about the program and its services. 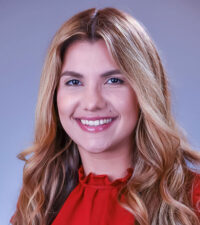