She didn’t think she could get pregnant, but she did. When she went into labor almost four months early, she thought she was losing him, but she didn’t.

Tyler Riddle is a double miracle.

First of all, his mom (a Riley kid herself) was not supposed to be able to get pregnant. And secondly, Tyler entered this world very early – 24 weeks and 2 days. He was a tiny 1 pound 12 ounces and could almost fit in the palm of his dad’s hand.

Mom Ashley Riddle was diagnosed with leukemia when she was 2 and underwent months of chemotherapy. That was 27 years ago. Doctors warned her parents that the chemo likely would leave her unable to conceive a child.

As she grew up, Ashley decided to protect her heart by pretending that she didn’t like kids, didn’t want kids. But that was far from the truth. “I had a hard time with the idea of not having children.” 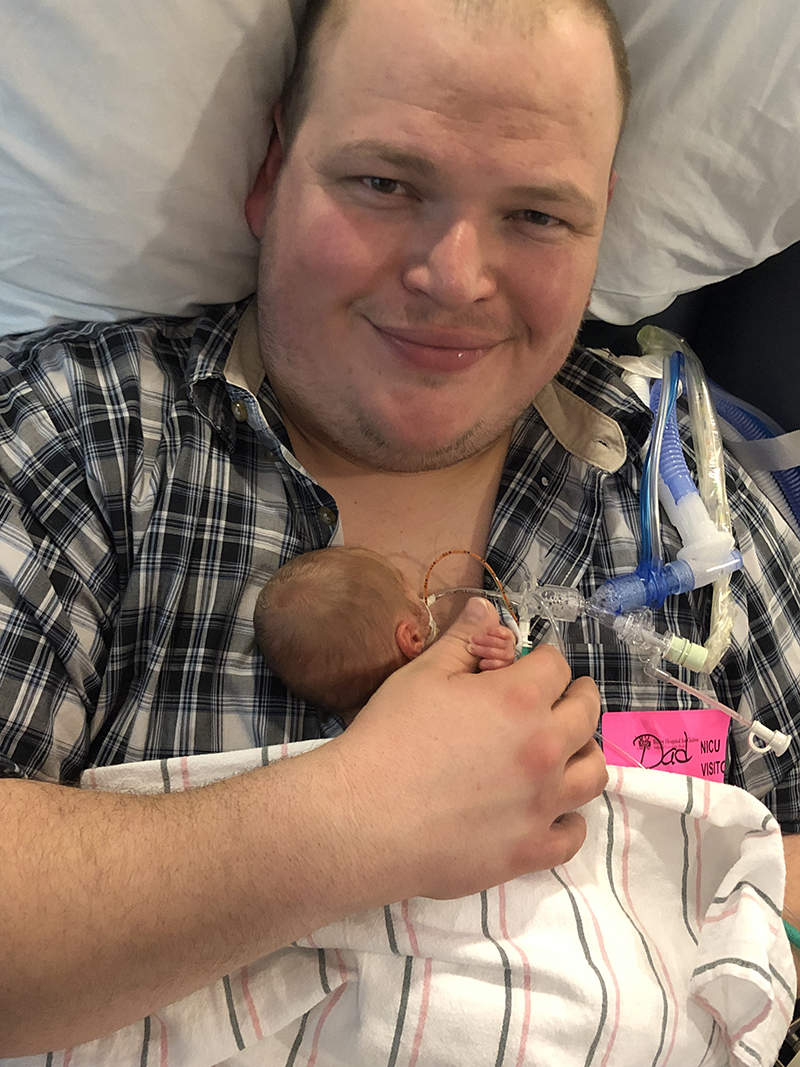 When she told her longtime boyfriend-now husband, Shane, he acknowledged that it was disappointing, but he encouraged her with thoughts of adoption or other ways of having a child.

Meanwhile, they showered love on their two dogs – Moose and Norman.

Next they went to the doctor to make it official. Then they put those three test strips in a plastic bag and presented it to Shane’s parents. It took them a minute to understand, then came the hugs and the tears.

It was, they said, the biggest blessing.

But the couple’s joy turned to fear just a few months later when Ashley went into early labor at just 24 weeks. “I thought I was losing him.”

Doctors at a southside Indianapolis hospital were able to stop the labor, but Tyler wasn’t going to wait. Two days later, Jan. 9, Ashley’s water broke. It took an emergency C-section to safely deliver the baby, not the kind of birth Ashley and Shane had anticipated.

“My husband wasn’t allowed in the room, and I was not awake for it,” she said. 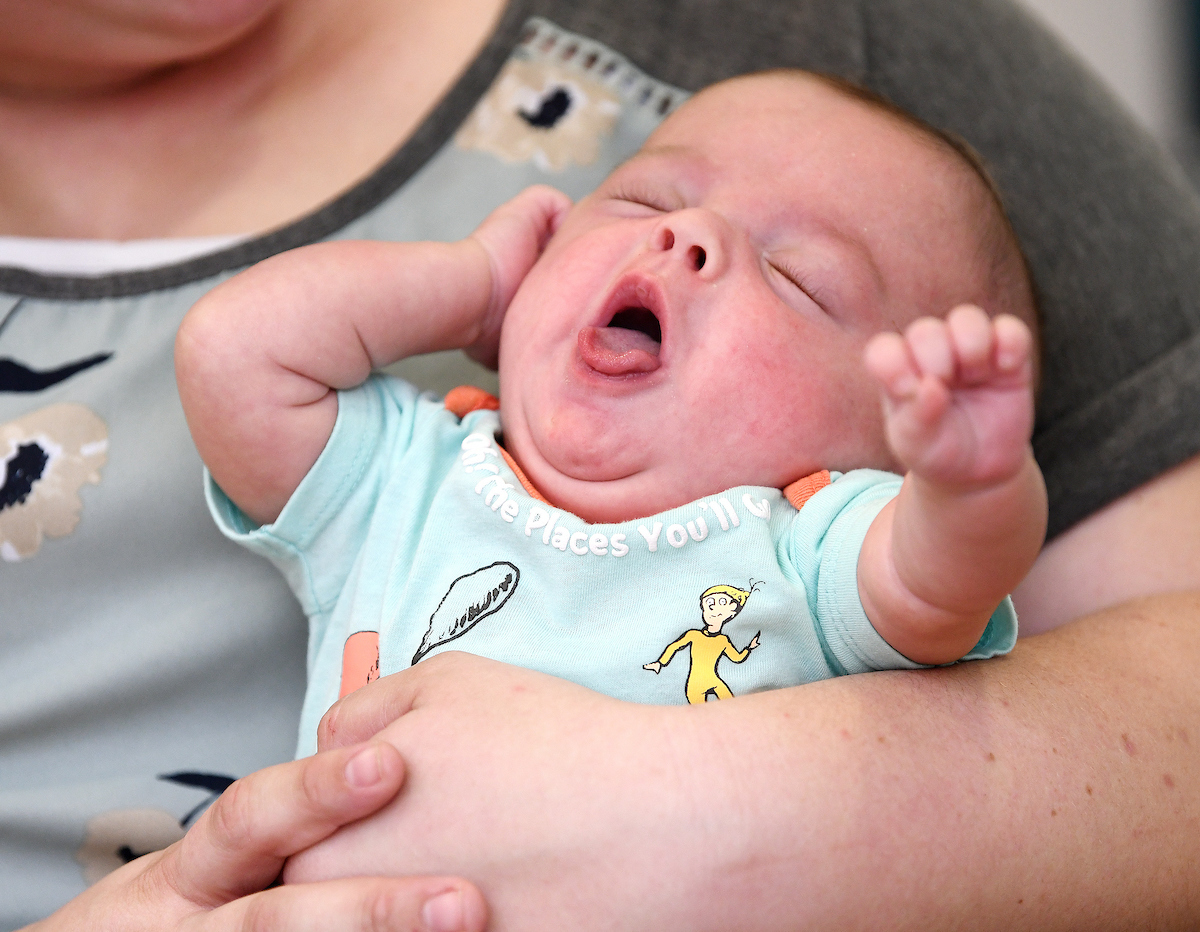 Their baby had a 50-50 chance of survival, the couple were told. After 13 days in the hospital where he was born, Tyler was LifeLined to Riley Hospital for Children at IU Health, where he was first treated for necrotizing enterocolitis, a serious infection that attacks the intestine of premature infants.

It was terrifying, Ashley said, but she learned over time that her little boy was feisty. To her, that was a sign that he was going to fight.

Though initially on a ventilator, he required less and less breathing support once he had surgery to remove extra tissue in his airway. Ashley pumped breast milk in hopes that eventually Tyler would be able to nurse, but after six weeks, her supply dried up.

“That was a hard thing,” she said. “It was the only thing I could do for him, and then I couldn’t.”

Tyler, named for Shane’s older brother who passed away in Riley’s NICU more than 30 years ago, came home May 3, four days after his original due date. He weighs over 10 pounds now and requires no breathing support at home. He has an NG tube for feeds, but he hasn’t needed it, his mom said.

After 101 days at Riley, what was it like to come home with their miracle baby?

“Amazing and scary at the same time,” Ashley said. “We really relied on the nurses. If I didn’t know what I was doing, I was able to ask questions. When you come home, it’s just you and the baby.”

Tyler, now 5 months old, comes back regularly for hearing and vision tests at Riley. Often, Ashley stops up on the NICU floor to visit her son’s nurses, including Erynn Evens, who cared for him when he weighed just a pound and change. 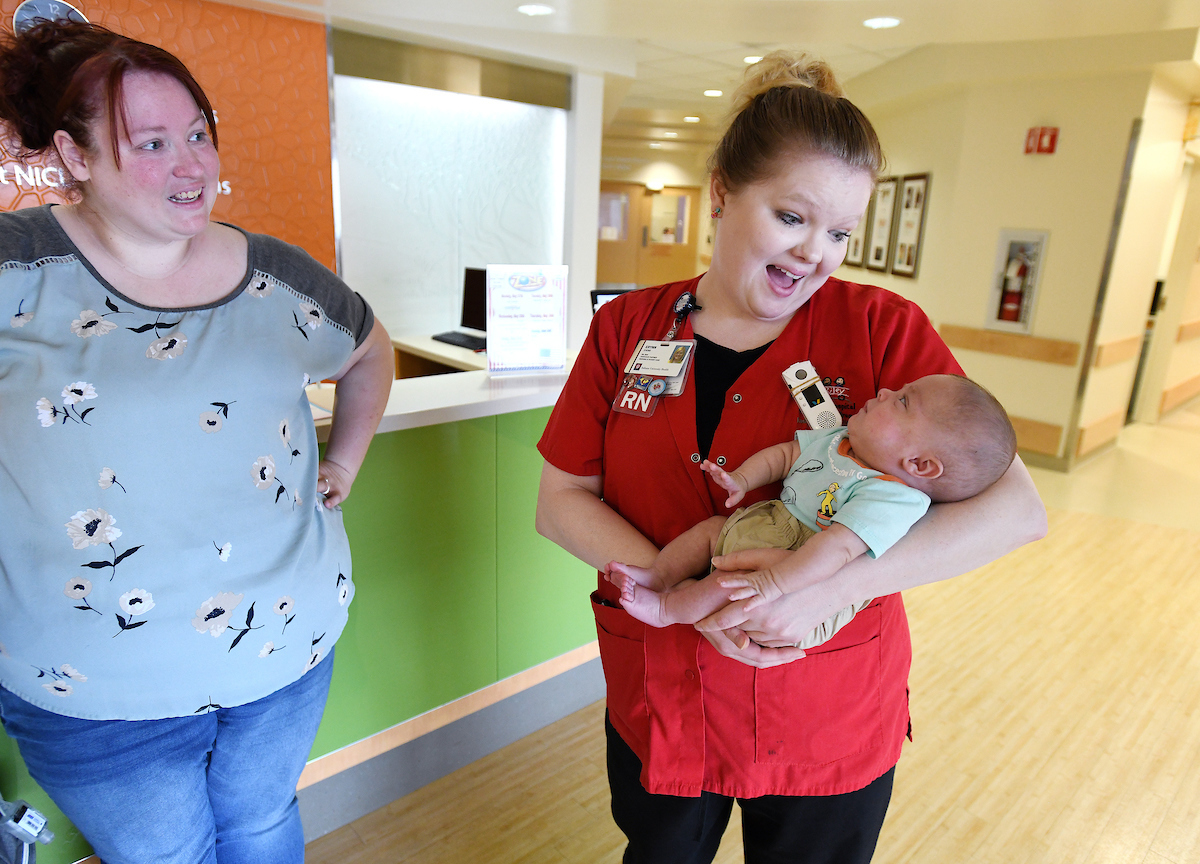 “He looks so grown up,” she said as she held him during a recent visit. “He’s all big now.” Evens said she doesn’t work full time now, so sometimes it’s a little while before she sees a patient again, “and gosh, it’s like a whole different baby. Even in a week’s span, they’re so big.”

Ashley doesn’t remember a lot about the time she spent at Riley as a child, but seeing the love and compassion of the nurses for her own child brings tears to her eyes.

“I love Riley. This place has always had a special place in my heart, and now it’s even bigger.”

It’s been a long road for this family of three, but Ashley said their faith and the support of their families and their church in Camby, Indiana, has helped them every step of the way.

“I think we were given Tyler to help change the world and bring us closer to God.”

As for having more children, she is leaving it in God’s hands.

“If God allows it, why not? Who am I to change the plans he has written for me?”