After nearly a year at Riley, Giancarlo (“Teddy”) gets a new heart

His name was added to the transplant list when he was just 5. He’d been waiting in the hospital since last September. Now, the 8-year-old is starting his new life, thanks to the gift of organ donation.

I first met Giancarlo “Teddy” Gomez when he was 5 years old. A shy kindergartner, he had just been placed on the heart transplant list after being diagnosed with restrictive cardiomyopathy.

Those words meant nothing to him at the time. He was more interested in his backpack full of Legos and drawing some of his favorite Pokemon characters.

Teddy, who also goes by Gianni, and his mom, Amie Hastings, had come to the IndyStar (where I worked at the time) for an interview as part of a series on organ donation. The longer we talked, the more comfortable Teddy became, until he eventually began asking his own questions and hamming it up for the camera.

It was one of the sweetest interviews I had ever conducted, and for Teddy, it would be the first of many.

The little boy and I were reunited last year at Riley Hospital for Children at IU Health. His cardiologist, Dr. John Parent, admitted him to Riley in September in preparation for a transplant.

No one knew how long it would be, but Hastings knew that in order for her son to get a new heart, “somebody else was losing their baby.”

Teddy, by then a second-grader, spent the entire school year in the hospital. He celebrated Halloween, Thanksgiving, Christmas, Valentine’s Day, Easter, even his birthday, and all the days in between at Riley – more than 300 in all.

But on June 25, 2020, transplant coordinator Regina Rosseter delivered the life-changing news that Teddy had been matched with a new heart. The next day, Riley cardiothoracic surgeon Dr. Mark Turrentine put it into his tiny chest. 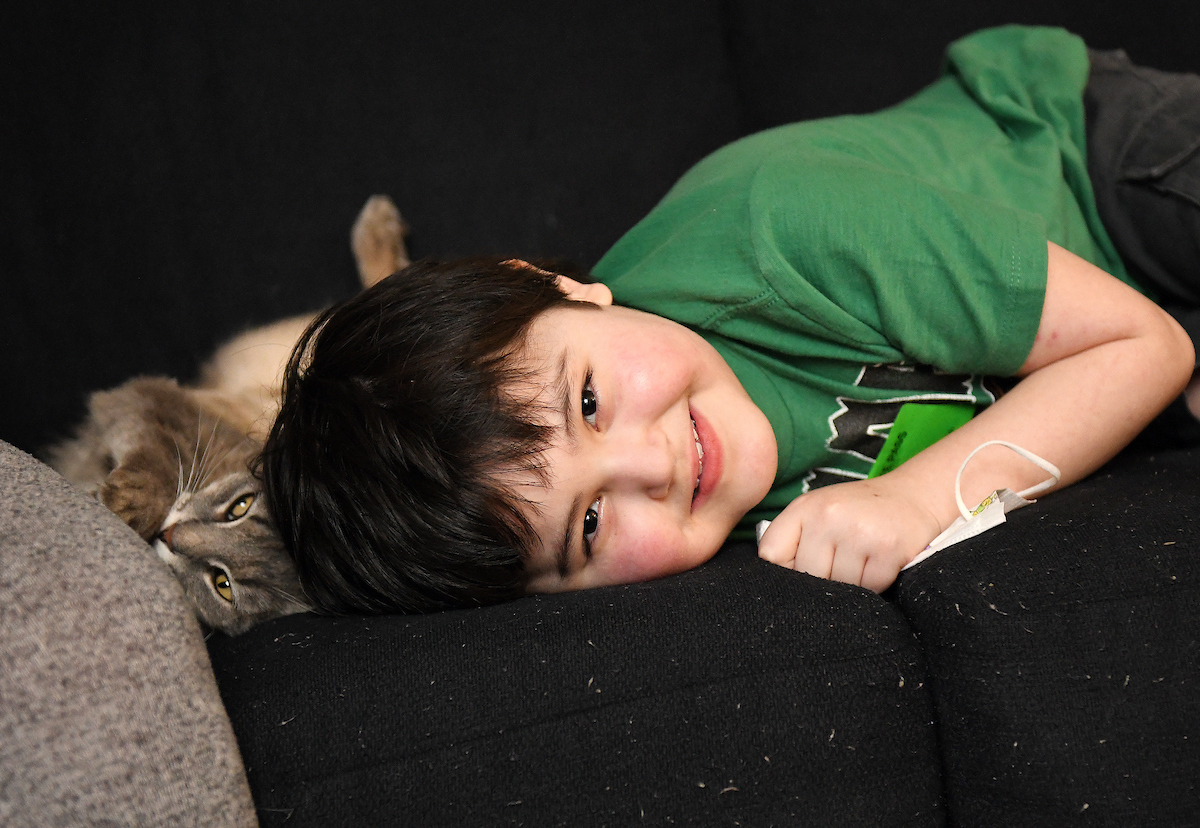 Now, the 8-year-old is adapting to life at home with his mom, his older brother and his cat, Duchess.

“She missed me,” Teddy says, as the 2-year-old feline sprawls out next to him on the sofa. “We’re all one happy family now.”

Unlike the kittens that scurry around the small duplex, Duchess is calm and steady, protective even.

He’s been home for about two weeks, settling in after a joyous discharge celebration at Riley in mid-July. Nurses, doctors, patient care assistants, therapists and other team members who have grown to love the little boy gathered to see him off from his Riley Heart Center home.

Registered nurse Nathan “Nate” May was thrilled for Teddy but acknowledged he would miss one of his favorite patients.

“Teddy and I became fast friends,” May said. “When he first got to the unit, he was shy and did not like going outside of his room and talking to the other children. Over time, after making friends with the nurses and the staff, we talked him into going to group music therapy. I think he made some lifelong friends with both the hospital staff and other heart center kids.”

To encourage Teddy to move more, May set up a scavenger hunt in the unit, using pictures of characters from Pokemon, Fortnite and Minecraft. The nurse was often called upon to ease Teddy’s anxieties when he faced an IV dressing change or more lab tests. 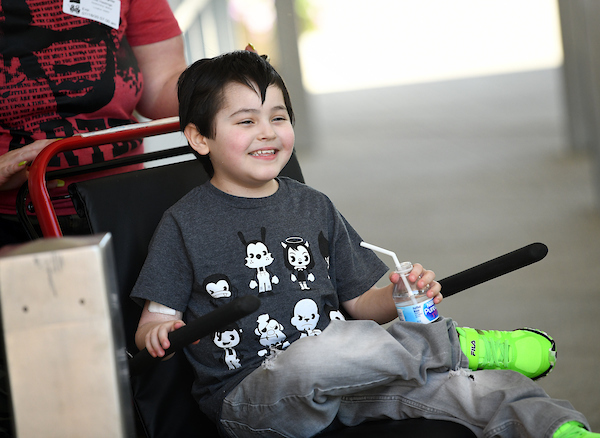 Teddy’s mom is grateful for the love, attention and care her son received at Riley over the 10 months he was in-patient, but she is ready for her family to adjust to their new normal at home.

“It’s a relief to be home for sure,” she said. “Not that there aren’t new stresses, but I don’t have to spread myself so thin, going back and forth to the hospital. Things are looking really good.”

For a child who admits to not really liking people, Teddy is surprisingly animated and talkative during our visit to his home.

“Miss any of the people?” He thinks for a second. “A few, like Nate, but I have him on FaceTime.” He thinks some more. “And maybe three more people of the entire 5,000 I saw,” he says.

And he did see a lot of people. He got to know other patients on the heart unit, especially two adults with congenital heart defects who were also waiting for transplants. The three spent a lot of time playing video games and watching football before the coronavirus came along and confined patients to their rooms.

Teddy’s mom says he’s not at all social by nature, but he blossomed during his long stay at Riley. He had no choice but to interact with his medical team, child life specialists, therapists and special guests, like the Purdue University basketball team when they visited last year.

Before the virus disrupted everyone’s routine, Teddy could often be seen walking the halls with his favorite techs and nurses.

Now he takes walks in his neighborhood west of Downtown Indianapolis with his mom and brother.

WHO WANTS TO PLAY UNO?

While not the longest recent resident of the Heart Center transplant floor, he was a close second. He was admitted not long after child life specialist Courtney Lyon started on the unit in 2019.

In those early weeks, she introduced the card game UNO to him, and he soon began asking everyone who came into his room to play. He kept busy with music and art therapy, and school too, even when COVID-19 forced classes to be held via Zoom. He learned a lot about Photoshop on the computer and loves to show off his creations.

Lyon learned a thing or two as well – about video games.

“I learned more about Fortnite and Minecraft than I ever imagined,” she said. 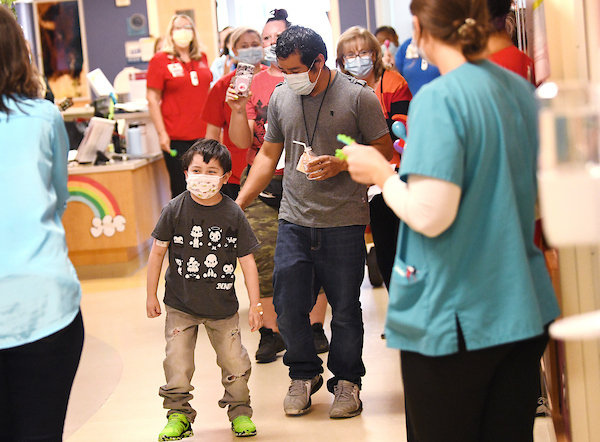 Like others on the floor, she will miss the young patient, but she is excited to see him reunited with his family and his pets.

“Any time someone is here for an extended time, it’s so exciting to experience that joy with them when they get to go home,” Lyon said. “That’s the ultimate goal. But it’s going to be different not having him on the unit, talking to him and learning about the things going on in the YouTube world.”

While Teddy will continue to have checkups in the Riley Outpatient Clinic, his mom looks forward to the day when they can visit the heart center unit again.

“I’m hoping after corona passes, they’ll let us go on the unit,” Hastings said. “I miss a lot of people there. A lot of nurses, a lot of techs … I miss Brenda (Cento) so much. She was like a mom to me.”

The other day, she was unpacking all of his things from his stay at Riley and came across a stack of birthday cards he received this past spring. She estimates there are more than 500.

“I saved them all and set them aside for him to look at again someday.”

Teddy, who will start third grade this month via remote learning, says he feels “exactly the same” with his new heart, except “I’ve got a bit more energy.” And another thing, he says: “I’ve started to like pickles. I used to be like, eww pickles, gross. Why is there a pickle on my plate?”

“Give me all the pickles.”