A Look at a Leader: Richard Schreiner, MD

For all his administrative successes, Dr. Schreiner says that his connections with former patients are the most gratifying parts of his career.

Dr. Richard Schreiner says his path to becoming a neonatologist emerged in the eighth grade. “That’s when I decided I didn’t want to be a priest anymore,” he says. He came up with a new career plan: he would be Dr. Schreiner instead of Father Schreiner. Once decided, it was a goal the science-loving Indiana native took very seriously.

Dr. Schreiner ultimately went to St. Louis University and Washington University School of Medicine in 1971 and completed his residency in pediatrics at St. Louis Children’s Hospital, where he met his wife. He joined the faculty at Riley Hospital for Children as a neonatologist in the newborn intensive care unit four years later. Dr. Schreiner had always liked children (he has four of his own), so specializing in neonatology was the perfect choice. “I loved getting up in the morning and coming to work because it didn’t feel like work,” he says.

In 1987, Dr. Schreiner was presented with an unexpected opportunity: Riley needed a new Physician-In-Chief and Chairperson for the Department of Pediatrics. His friends at the hospital encouraged him to take the position, but Dr. Schreiner was hesitant. “I wasn’t as interested in being a manager as I was in caring for sick babies,” he says. But he accepted the job, and Riley’s pediatrics department became one of the best in the nation under his 22 years of leadership. As the hospital grew and revenue increased, Dr. Schreiner used the money to build research and educational programs, which led to the creation of the Herman B Wells Center for Pediatric Research and endowments for the Physician Scientist Training Program and Dyson Pediatric Residency Program, among others. 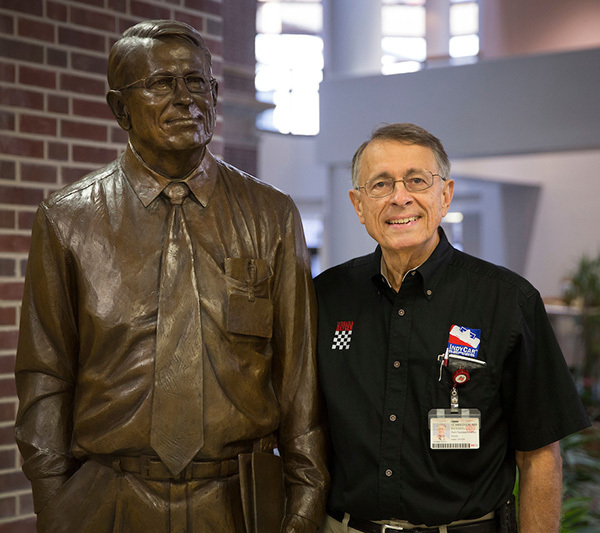 Dr. Schreiner humbly credits much of his success to the leaders and administrators he worked with. “I focused on hiring great people and giving them the resources needed to do their job,” he says. “My business philosophy was to do what was best for the kids, staff, hospital, and students.”

For all his administrative successes, Dr. Schreiner says that his connections with former patients are the most gratifying parts of his career. He still gets a Christmas card every year from the father of a child he treated in 1975. “The baby had been born outside the uterus, which usually results in death,” Dr. Schreiner recalls. The situation became even more serious when the child’s bowels ruptured. It seemed unlikely that surgery would save the boy, but Dr. Schreiner and the surgeon decided to try anyway. “Some people thought we were going overboard because the outlook was so grim,” he says. The baby survived, however, and is now a healthy adult.

When Dr. Schreiner retired in 2009, he was the longest-serving pediatrics department chair in the country. You might still run into him at Riley, though—he keeps an office there and gives tours of the hospital and helps with fundraising. He also does advocacy work and fundraising for the non-profit Down Syndrome Indiana (he’s the president), and gives talks about the condition with his daughter, Kelley, who has Down syndrome. On October 15th, individuals can watch him carry the torch for Marion County in the Indiana Bicentennial Torch Relay Race.

All in all, retirement is treating Dr. Schreiner well. “I’m having a ball,” he says.