A hero to many, Dr. John Brown is hanging up his scrubs

After a 43-year career at Riley Hospital, this renowned heart surgeon is passing the scalpel.

Dr. John Brown still remembers taking the tiny heart into his hands and squeezing it gently over and over again, willing it to start beating on its own.

The patient was just 3 months old, and though the open-heart surgery was going well, the baby suffered a “pulmonary hypertensive crisis.”

“The lungs went into spasms and wouldn’t let blood get to the left side to keep the blood pressure up,” Dr. Brown recalled. “But I knew the heart had been fixed and so I massaged that child’s heart for three hours.”

As he’s telling this story, one of thousands he can share from a 43-year career as a world-renowned heart surgeon at Riley Hospital for Children at IU Health, there’s no mistaking the passion that still beats loudly in his own heart.

“The people around me, they thought I’d lost it,” he said with a chuckle this week after another day in the operating room. “I said, ‘This heart is fixed, this is a good heart. All it needs is just some time for this spasm in the lungs to get better.’ We did a number of maneuvers, but it took three hours to bring this child around.”

That was decades ago, before the development of ECMO (extracorporeal membrane oxygenation), a form of mechanical life support that uses a pump to provide heart-lung bypass support outside of the body.

But the incident speaks to the surgeon’s tenacity and skill.

“The lesson is, don’t give up,” he said. “Organ systems can recover, particularly in children. If the brain is still functional, the heart and the lungs will come around. Hang in there and give the patient a chance.”

It was July 1978 when a young Dr. Brown began his career at Riley in his home state of Indiana. He has been a part of so many firsts in his 43-year career, including the state’s first pediatric heart transplant and first newborn heart transplant.

He and Riley cardiologist Dr. Randy Caldwell started the transplant program at Riley more than 30 years ago. Dr. Caldwell, who began his career at Riley on the same day in 1978 as Dr. Brown, is also retiring at the end of the year. Look for more on his story in a separate article soon.

Mark Ayers was among the first to undergo the procedure. He was just a boy at the time, but he would go on to follow the man who saved his life into medicine and now is a pediatric cardiologist alongside his mentor at Riley.

After more than 15,000 heart surgeries on Riley kids and another 5,000-plus on adult patients within the IU Health system, Dr. Brown, 75, has decided the time is right to hand over the scalpel to his younger colleagues.

“It’s with mixed emotions, no question. I’m rapidly approaching my 76th birthday, so I thought maybe this would be a good time, while I’m still fully functional and love what I do,” he said. “I’ll miss it, I really will. But there’s a season for everything, and I think this is probably a good season for it.”

Four years ago, Riley brought on heart surgeon Dr. Jeremy Herrmann to train among the cardiothoracic surgical team, which also includes Dr. Mark Turrentine and Dr. Mark Rodefeld. The idea was always to groom Dr. Herrmann to step into Dr. Brown’s shoes someday, and that day has come.

A heavy lift? Perhaps, but Dr. Herrmann has spent years working closely with Dr. Brown to prepare for this transition. He’s ready.

“I know his shoes are impossible to fill, but I’m sort of taking the torch from him and carrying it forward. It will never be easy, but this feels like the right time,” the younger surgeon said about his mentor. “We’re all happy for him, to see him go out on top, on his terms, his time.”

Dr. Brown has full confidence that the team can get along just fine without him, though he is leaving the door open just a crack.

“In some respects, I kind of need to get out of the way and let them fly solo,” he said. “If they need me to come back on rare occasions to help out with something complex, I’m happy to do so.”

LEARNING FROM THE BEST

Dr. Herrmann actually met Dr. Brown as a med student some 15 years ago, then worked with him early in his residency at Riley. He knew he was learning from the very best.

“He’s almost larger than life,” Dr. Herrmann said. “One of the things that has defined his successful career as both a tremendous surgeon and a great mentor is his uncanny ability to simplify complex concepts – whether talking to a family or another surgeon or a resident – he just has a way of connecting.”

Other defining features that Dr. Herrmann has noticed: “He’s always a gentleman, no matter who he’s around. He’s extremely tenacious, and he’s an eternal optimist. He finds something positive in almost anybody or any situation. He becomes a force of positivity.”

That positivity, that confidence, that compassion others have noticed is not lost on his patients and their families. It allows them to feel comfortable sending their child into surgery.

“As a parent and grandparent, he often draws on those emotions and experiences, so when he’s saying something, he’s not just talking like a surgeon but as a family member,” Dr. Herrmann said. “People find hope in that.”

Dorie Medler is one of those parents. She and her husband, Jed, have been on quite a journey with their son, Josiah, since he was born in November 2018.

Josiah was diagnosed with hypoplastic left heart syndrome, a rare condition that requires three surgeries over time to correct. Without surgery, the defect is fatal, usually within the first few weeks of life. Josiah first had open-heart surgery at Riley when he was six days old. Drs. Brown and Herrmann operated on him again in June 2019.

The third reconstructive surgery, called the Fontan, is performed at about age 2. Medler figures it will take place sometime next year, with Dr. Herrmann taking the lead.

“He rocks; he will do great,” she said of Dr. Herrmann. “It’s just bittersweet to see Dr. Brown go. He is the most incredible human I’ve ever met. I swear he was sent to Earth to help people.”

She has written a note of appreciation to him and asked that we share a picture of it in this story. Others who would like to contribute to a book of memories to be presented to Dr. Brown by his family are asked to email comments and congratulations here.

“MY COLLEAGUE AND MY HERO”

Nichole Gralia owes her life to Dr. Brown and Dr. Caldwell, she said. Gralia was born with a hole in her heart and a missing pulmonary valve, a condition that was “incompatible with life,” her surgeon said.

That surgeon, Dr. Brown, knew he could save her. He cut into her chest, spread her tiny ribs apart and worked his magic.

Today, that tiny baby is a nurse practitioner at the same hospital where her life was saved.

“It’s because of him that I went into medicine,” she said.

Upon hearing the news of his impending retirement, she sent along these thoughts, addressed directly to him:

“Dr. Brown, I couldn’t be more proud to call you my surgeon, my colleague and my hero. Thank you for your dedication and sacrifice to the field of pediatric cardiovascular surgery. Your work has saved countless lives like mine. Your work has allowed us survivors to follow our dreams. Your work gave us all a second chance. … We will carry on the legacy you have built.”

“He has taken care of nearly 20,000 children and families and trained so many surgeons to go out and do congenital heart surgery,” she said. “He has done this from his own heart, exemplifying all the best in our mission and vision and values. He will be missed but is leaving a legacy that will impact children forever.”

Aside from healing broken hearts, Dr. Brown also loves teaching the next generation of surgeons.

“I’ve had the opportunity to be involved in the training of 100 cardiac surgeons who practice all over the world. It’s been very, very rewarding. Not only are you helping the patient … today but you trained somebody who will be doing that for the next 40 years on their own. So you play a small part in that ripple effect.”

Cynthia Bradfield, who has worked with Dr. Brown for decades as his administrative assistant, gets emotional just thinking about him leaving.

“I just can’t put into words how hard it will be to not see Dr. Brown every day,” she said. “He is one-of-a-kind. There will never be another.”

Closing out his career this year, amid a pandemic, means the usual retirement festivities can’t be held, but that’s fine with him.

“I get accolades every day for what we do, so I don’t need a special party.”

He feels immense satisfaction after four-plus decades of working in a place that he loves alongside people he respects and knowing that his patients get a second chance at living a better life.

None of it would have been possible without the love and support of his childhood sweetheart and wife of nearly 52 years, Carol Ann, he said. Their three children have given them seven grandchildren, all of whom live in Indianapolis, and Dr. Brown is looking forward to slipping into the role of Grandpa full time.

After he wraps up several surgeries this week and next, he plans to spend more time at his farm in Owen County, south of Indianapolis, and do a little more hunting and fishing here and out in Colorado, where one son lives.

“It’s been a wonderful career for me in a wonderful hospital. If I had it to do all over again, I’d do exactly the same thing.”

Photos without masks were taken in previous years. 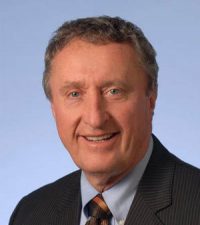