Lucas Reinoehl has a lot to say about a lot of things. Today, he is standing a little taller after having “growing rods” in his back adjusted to straighten his spine.

Lucas Reinoehl talks a mile a minute, his voice pitched high and excited. He talks about the newest video games, an owie on his finger, ice cream, football, and how he spied on third-graders during recess from his perch on top of a slide.

And that’s just in the first few minutes.

He goes on and on … for pretty much his entire visit at Riley Hospital for Children, while his parents, Tyler and Sarah Reinoehl, try to keep up. And try to keep him from saying anything too embarrassing.

“No filter,” his mom says, laughing.

“I was just looking, I was looking like a bald eagle,” Lucas said about his adventure on the playground, “and some of the kids got in trouble.” The words continue to tumble out. “Can someone teach me how to fly? Then I could escape school. I could just fly to my mom’s work.”

Lucas and his parents are at the Riley Outpatient Center for a follow-up appointment with Dr. Tyler Christman, an orthopedic surgeon who has been treating the 8-year-old for severe kyphoscoliosis – a curvature of the spine – for several years.

Lucas is comfortable here, having spent 46 days on Riley’s eighth floor earlier this year in halo traction to stabilize his spine. During that time, he loved nothing more than playing video games and making friends with his entire care team.

He has been a Riley kid since he was not quite a year old. His parents noticed he seemed to sit a little crooked, and X-rays revealed a significant curve in his spine. They were referred to Riley, despite the family living nearly two hours away in Ohio, and Lucas was fitted with his first upper body cast to stabilize his spine when he was 15 months old. He would go on to wear 15 more casts over the next seven years.

While casting can be curative for some kids with early onset scoliosis or infantile scoliosis, Lucas’ case is more serious. Casting helped keep the curve from getting worse, but it never got better. So halo traction was the next step, followed by surgery.

Halo-gravity traction pulls the head and spine upward carefully, applying a slow stretch to the spine. Doctors do this by attaching a metal ring that surrounds the head to a pulley system, with weight gradually added over time.

In March, Dr. Christman and Dr. Ryan Fitzgerald implanted growing rods that will enable the boy’s spine to correct over time. Today’s visit was the first during which Dr. Christman would gently place an electromagnet over Lucas’ back to lengthen the MAGEC rods. It’s a noninvasive procedure, but Lucas had worked himself into a state before lying face-down on the exam table with his arms outstretched like Superman, trying to distract himself with a video.

“This is probably going to be my worst nightmare,” he squeals in typical Lucas fashion, while his mom attempts to calm him.

Before this moment, he and Dr. Christman had been trash-talking about their skill levels on video games, a topic they bonded over early in their patient-doctor relationship.

“How you doing, buddy,” he asks Lucas, who wants to know how far the physician is on the game Zelda.

Dr. Christman sighs. “I’m so terrible at fighting that I haven’t been playing. After you left the hospital, I haven’t been able to get any tips, I can’t get past the shrines.”

From there they move on to Fortnite, Minecraft and Beyblade. Dr. Christman, a father himself, enjoys the banter, along with the challenge of keeping up with Lucas.

“Good,” Lucas says, before launching into a story about the time he bent down to scratch his leg, forgetting about the newly implanted rods in his back. “I actually cried.”

As they look at his X-rays, Lucas is telling another story about a missing guinea pig and a new puppy he hopes to get.

Dr. Christman does his best to keep up with the stories while he shares good news with Lucas and his parents.

“Look at how much taller you are now. This is where we started and you were leaning over so much. Look at how nice and straight and tall you are,” the surgeon says.

The lengthening treatment in clinic has Lucas standing just a smidge taller, 3 millimeters to be exact, for a height of just under 3 feet, 10 inches.

The soon-to-be third-grader puffs out his chest, and says, “Now those people at school won’t call me short anymore.”

Tyler Reinoehl says his son’s progress has been encouraging, despite the nerve-wracking surgery earlier this year.

“Dr. Christman did miracle work,” Reinoehl said, recalling how after the procedure, he, his wife and the surgeon hugged and cried. All were wearing their #TeamLucas/Scoliosis Warrior T-shirts made by a friend. The family is wearing theirs again today.

After reviewing the results of the X-rays, Dr. Christman goes over restrictions for Lucas. No rough-housing, no roller coasters, no bumper cars, no tackle football.

Before leaving, he asks if he can visit his old room on 8 West, but restrictions make that impossible. How about a trip to the vending machines then, he suggests. Or ice cream on the trip home.

He got to miss full-time school and play video games, but he also thrived in music therapy, learning how to play a keyboard – at full volume. At the time, only one parent was allowed to stay in the room, so mom and dad alternated visits.

“I think he enjoyed that one-on-one time with us,” Sarah Reinoehl said.

And he accumulated a lot of stuff.

“Getting everything out of that room took a long time. I think we had five wagons full,” she said.

“I’m famous at Riley Hospital,” Lucas says before leaving. Then, one more question.

“Do you know where the vending machine is?”

Dr. Christman will see Lucas back in about three months, when he will do the same rod-lengthening procedure to match the boy’s growth.

“I think the visit went really well,” he said later. “Lucas was clearly very nervous about his lengthening but had prepared by watching some videos online to get ready. He did great and was very brave.”

And now he’s living his best life this summer at home. No school, no back brace and plenty of time to play in his Papaw’s swimming pool. 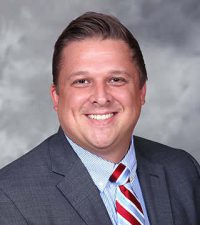