PICU nurse/educator Erin Kramer: “The work we do here every day is exactly what I’ve wanted to do with my life. You’re here for the happiest of times and the most devastating of times.”

Erin Kramer went to Purdue University to become an engineer and came out as a nurse. Seven years later, she couldn’t be happier about her career choice.

Nursing is a different way of thinking, said Kramer, clinical adviser in the pediatric intensive care unit at Riley Hospital for Children at IU Health. But in a lot of ways it was harder than engineering.

She realized before her sophomore year, “I can do the work and make the grades in engineering, but I won’t be happy doing this for the rest of my life.”

The switch to nursing was a blessing. “I felt like I was exactly where I needed to be.”

Now she combines her passion for nursing with her love of education in her dual roles providing patient care and teaching fellow nurses.

She started in the PICU straight out of nursing school seven years ago, though originally she thought she was headed to adult ICU care.

“I never thought I could do peds because I’m really emotional and thought I just would never be able to handle it,” she said.

She was close to accepting a position in the adult world but then had the opportunity to interview for a job at Riley. She was honest about her trepidations, but the manager told her she’d be a good fit in the unit and offered her the job.

It has turned out to be a dream job. 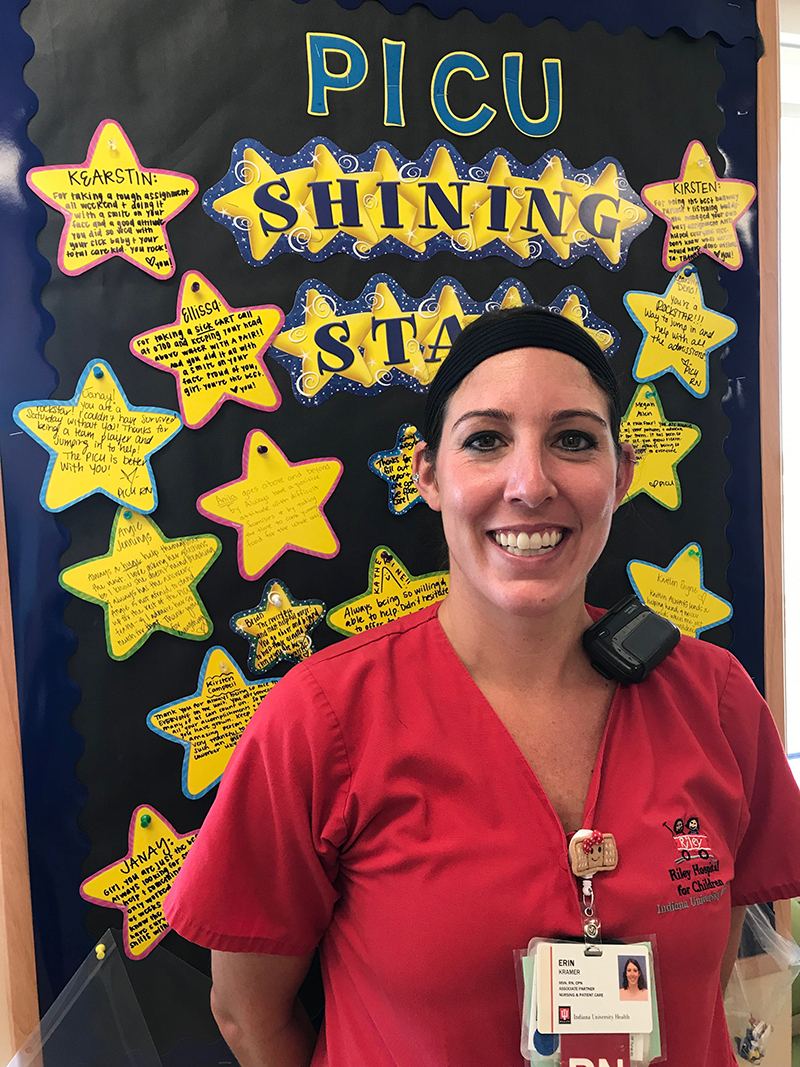 What does she like best? “I love the patients, but our team here in the PICU is so phenomenal. Everyone just gives and gives. And I love being able to teach a new nurse new skills. That’s one of my favorite parts of the job – when a new nurse is learning something for the first time and I’m able to be there and help them succeed. That to me is super rewarding.”

Kelsi Lawless is one of those PICU nurses whom Kramer has guided.

“Erin is amazing,” Lawless said. “I was her first orientee and we just clicked. She was always understanding and patient with me. This is a challenging environment, but I felt like Erin prepared me really well.”

Kramer had only been a nurse at Riley a couple of years herself before she helped precept Lawless. Her skills and knowledge are invaluable, but her way with people is even better, Lawless said.

“She’s so helpful. Whatever you need help with something, she’ll put it on her list to do and she never makes you feel like you should ask somebody else. I’ve never heard anyone here say they feel uncomfortable going to Erin. She is one of the best people I think I’ll ever meet in life.”

Kramer, who also considered a career in teaching, earned her master’s degree in nursing education. Now she has the best of both worlds.

She took on the role of clinical adviser – one of three on the unit – four years ago, helping with orientation, serving as a unit resource for nurses and helping them grow in their practice.

Caring for critically ill children has a way of making you reorder what’s important in life, Kramer said, and that lesson is reinforced every day.

“The work we do here every day is exactly what I’ve wanted to do with my life. You’re here for the happiest of times and the most devastating of times.”

Yet no matter how sick the young patients are, they’re not focused on that, she said. They still want to do kid things.

“I will have a sedated, intubated kid and you’re thinking they’re so sick and you’re so sad for them, and they’ll wake up and just want to watch ‘Frozen,’ ” she said. “Something so ordinary in such an extraordinary circumstance.”

Teenagers are different, Kramer said. She holds close in her heart and her memory a cystic fibrosis patient who sensed that she did not have much time left.

“She just had these eye-opening quotes that were good life advice. She kept her humor and her grace until the end. I’ll always remember her.” 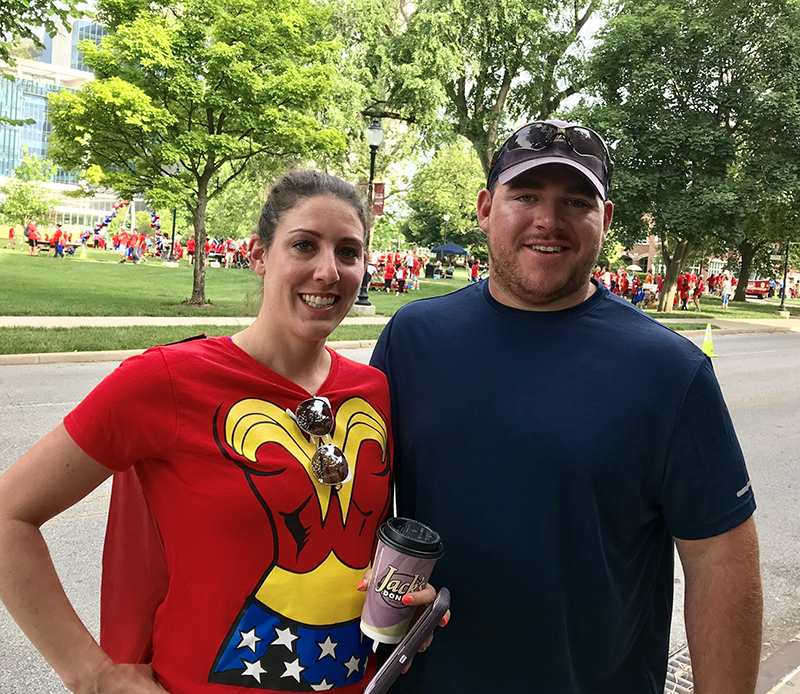 Kramer and her husband, Austin, have attended nearly every Riley pediatric critical care walk since she started on the unit as a way to honor those patients who’ve passed and reconnect with those who have recovered.

“You usually don’t get to see them after they get better,” she said, so it’s always a special day.

While loss is a part of life, especially in nursing, there are plenty of happy times, Kramer said. Kids do get better.

“My favorite patients to take care of are little respiratory kids that maybe just need to be on the vent for a week or two, then they get better and go home. That’s a really cool thing to see.” 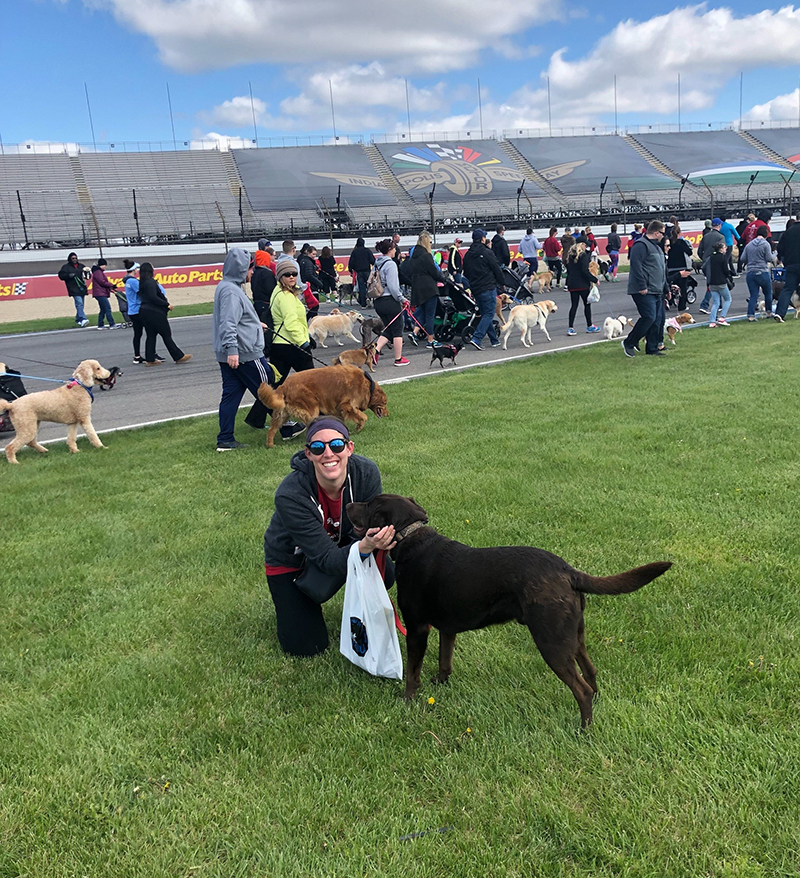 Kramer, who grew up with her siblings Ellen (also a nurse) and Chad in Angola, Indiana, had never set foot in Riley before she interviewed.

“I came here and thought, this is a magical place.”

She and her husband live in Brownsburg with their cat and dog, Ernie, whom she lovingly refers to as their foster failure.

He was a rescue dog they planned to foster, but they fell for him almost immediately and made him their own.

“He is just the sweetest, most gentle soul.”

Sounds like the perfect match for dog and human.