You can call this 5-year-old “Famous Amos”

After a traumatic birth, Amos O’Connor was forced to chill – in a treatment known as therapeutic hypothermia – to save his life. When family members couldn’t visit him, they sent well wishes written on packages of Famous Amos cookies.

Amos O’Connor shakes a visitor’s hand and says hello, a smile lighting up his blue eyes. He’s polite, personable and poised – for a 5-year-old.

This is “Famous Amos,” a youngster whose name might bring to mind chocolate chip cookies (more about that later), but to his parents it means “borne by God.”

Indeed, Amos is a miracle, as far as his family is concerned. The little guy who doctors feared might have suffered brain damage at birth, starts pre-kindergarten on Friday. On Saturday, he’s celebrating his half-birthday with a “Ghostbusters”-themed party. And one day he plans to be a “train driver and a firefighter.”

Amos was born full term via C-section Feb. 5, 2014, to Brittany and Adam O’Connor of Indianapolis. But it was not the routine delivery doctors at Franciscan Health expected. Amos was born in full cardiac arrest.

Brittany, who was conscious during the delivery, knew immediately something was wrong. There was no sound from her son.

“I didn’t know if my baby was alive.”

The medical team immediately began CPR and intubated the newborn, rushing him to the hospital’s neonatal intensive care unit. 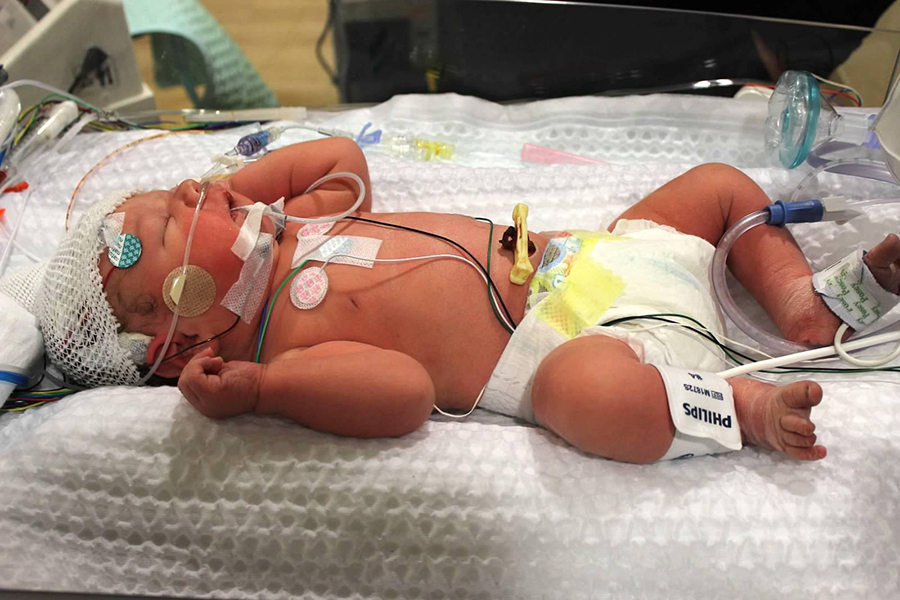 Kelly Butler, then a NICU nurse/patient care coordinator at Franciscan Health and now a NICU nurse educator at Riley Hospital for Children, remembers that day well.

“As I was working to resuscitate him, I noticed he was having seizures.”

She didn’t know exactly how long his brain had been deprived of oxygen, but the seizures told her he needed specialized treatment that only Riley Hospital could provide. She knew that because Butler is a Riley mom herself.

In Amos’ case, the lifesaving treatment needed was therapeutic hypothermia to reduce the risk of severe brain damage. Riley was participating in a research study of the treatment at the time in concert with other neonatal units collaborating in the NICHD Neonatal Research Network, according to Riley neonatologist Dr. William Engle.

Riley nurse/educator Melissa Hollar, who cared for Amos as a bedside nurse in those early days, explained that anytime there is an interruption in blood flow to the brain, therapeutic hypothermia must be started within six hours to prevent a secondary inflammatory response, which can lead to lifelong impairment or death.

Amos was transferred via LifeLine ambulance to Riley within two hours of his birth.

Back at Franciscan Health, Brittany was in despair. She couldn’t leave the hospital because she was recovering from surgery. 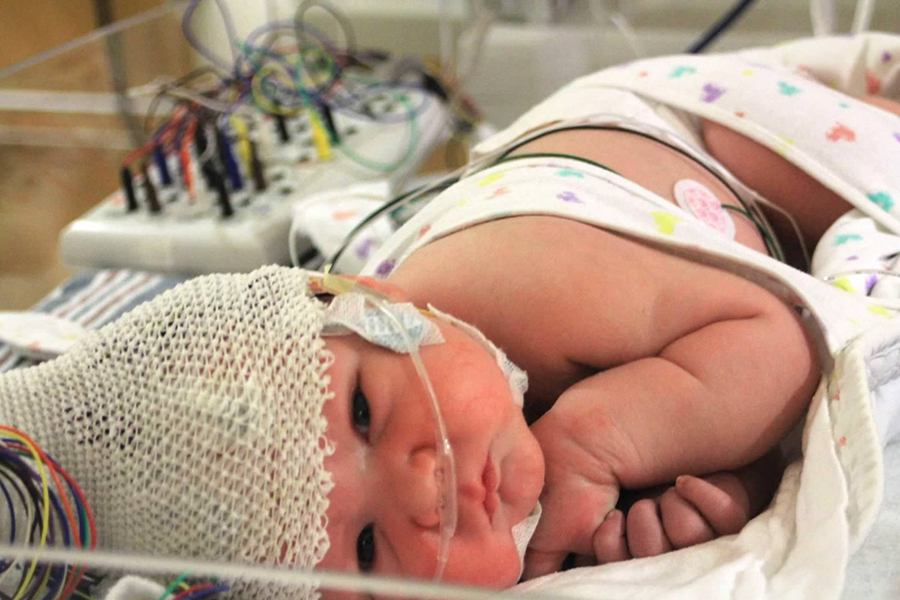 “I told my husband to go with our baby because I didn’t want him to be alone,” she said. “I was in shock.”

Butler understood. She’d been through it decades earlier when her son had to be transferred to Riley’s NICU shortly after birth.

“It’s very frightening,” Butler said. “It’s hard enough to be a NICU mom to begin with, but then knowing your baby is being transferred to another facility …”

She stopped by Brittany’s room to offer a word of support. The new mom grabbed onto it like a lifeline.

“She said she was a Riley mom and that my son was going to the greatest place, and then she said a prayer for Amos,” Brittany recalled. “She brought me a lot of peace.”

Back at Riley, Brittany and Adam’s large extended family were gathering to pray and support the couple’s first child and the first grandchild for their parents.

Because it was flu season, however, they couldn’t come up to the unit, so many of them camped out in the lobby. 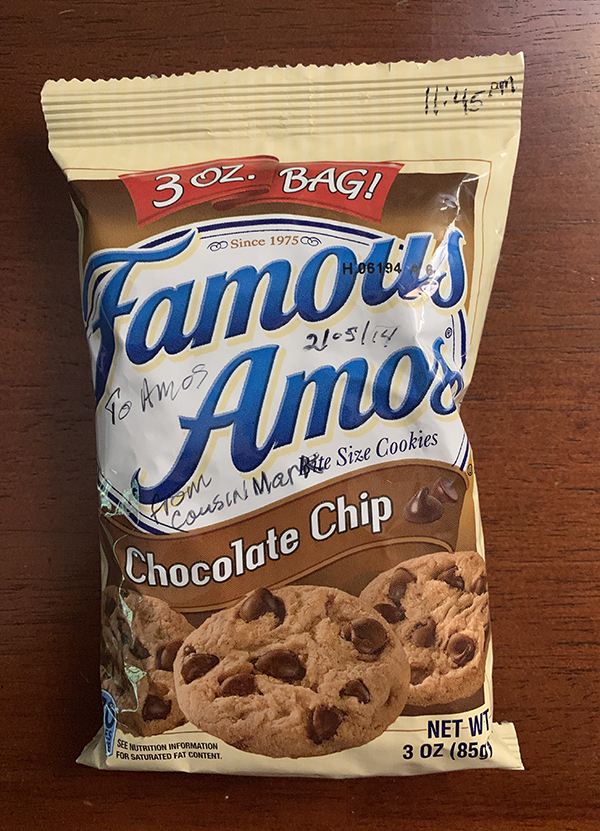 One by one, packages of Famous Amos cookies began arriving at the nurses’ station. The first one came just hours after Amos was admitted. Adam’s cousin Mark Dougherty saw them in a vending machine and took it as a sign after finding out he couldn’t come up to see Amos. He bought the cookies and scrawled a note on the package before asking a nurse to deliver it.

“It started a trend among family and friends, giving us a simple hello or ‘we’re here for you,’ ” Brittany said. Countless packages of cookies followed. She has kept that first cookie package among the mementoes from Amos’ Riley stay.

“The love and support we felt was overwhelming. We knew we had great family and friends, but for them to show up knowing they weren’t going to have face time with us (and) just leave a note, was amazing. We took the sign as just that – Amos was put on this Earth to do big things and this was just the beginning of our journey with Famous Amos.”

BIRTHDAYS AT THE BEACH

Three days after her son’s birth, Brittany finally got to see her baby up close, but she couldn’t touch him.

Nurses encouraged her to talk to her son as he lay sedated under the cooling blanket, designed to cool his core body temperature and thereby protect his brain.

As a new mom, she was not sure what to say, how to talk to her baby without being able to hold him or even stroke his cheek for fear it would alter the consistent low body temp the therapy required.

But the cooling blanket inspired her, and she promised her son that she and Adam would take him someplace warm as soon as he was able to travel. They made good on that promise, and now every year around his birthday, they go to the beach.

Within a few days, Amos was removed from the therapeutic hypothermia treatment. He remained at Riley for 11 days, though he was readmitted two weeks later for dehydration and underwent surgery for pyloric stenosis, a condition in which the opening between the stomach and small intestine thickens, resulting in vomiting after feeding.

The first year after Amos’ birth was rough, Brittany said. “We kept waiting for the next shoe to drop.”

“She was with us through some of the darkest days of our lives, a constant glimmer of hope.”

Dr. Harris passed away in 2017 from complications of diabetes. She was 41. 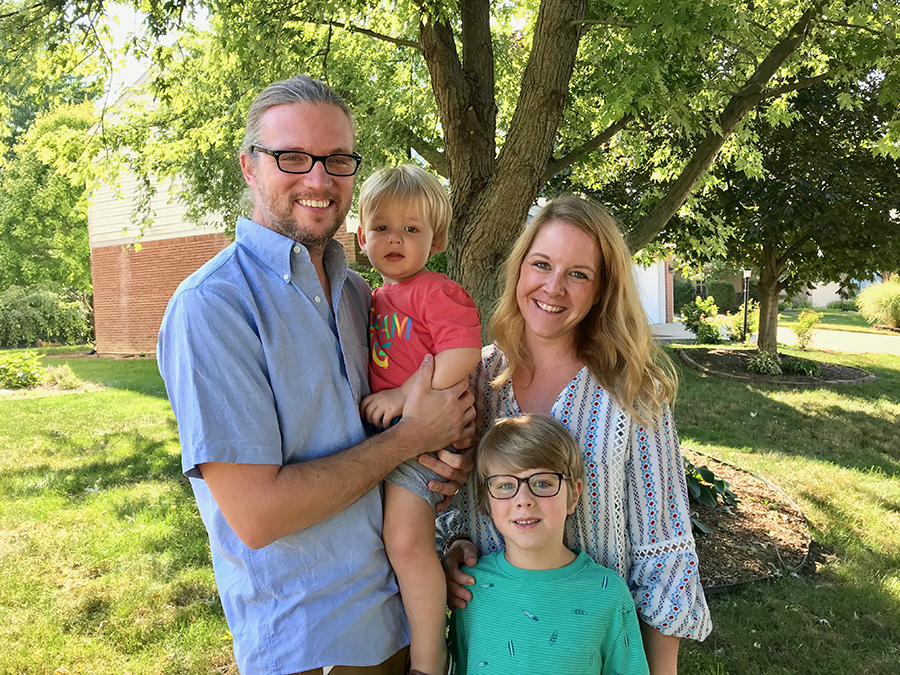 She wasn’t the only Riley team member to make an impression on the O’Connors, who also have an almost 2-year-old son named Ford.

“I could list a staff member who impacted us monumentally from every single day we were there,” Brittany said. “Riley really has a magic about it.”

One of those was NICU nurse Pam Schoonveld, who Brittany recalls held Amos’ tiny hands one night. “She just quietly stood there comforting him. She gave me so much peace on such a scary night.”

Five and a half years after his traumatic birth, Amos is remarkable in every way. He has an excellent vocabulary, he writes, draws pictures, swims and loves to travel.

“He’s the most outgoing little dude you’ll ever meet,” his mom said. Perhaps more importantly, he has a kind heart.

“He teaches me every day about kindness and generosity.”