Women for Riley bring the fun to sick kids

Volunteers meet monthly on 9 West to make crafts with patients and help them forget about being in the hospital, even if just for a little while.

For a while, the playroom holds more grown-ups than children, more volunteers than patients. That’s a good thing.

Volunteers with the Women for Riley organization are on 9 West at Riley Hospital for Children on a Thursday morning teaching kids how to make sun catchers. But they’re doing much more than that.

They are bringing their own sunshine into the hospital, brightening the day for kids and parents who’ve seen their share of storms.

Women for Riley is a philanthropic group within the Riley Children’s Foundation. Members commit to actively supporting the hospital for three years, which includes a financial gift of $1,000 or more each year.

The money helps pay for grants and the annual Riley Cancer Center Prom. But the real reward for these women is working directly with patients. 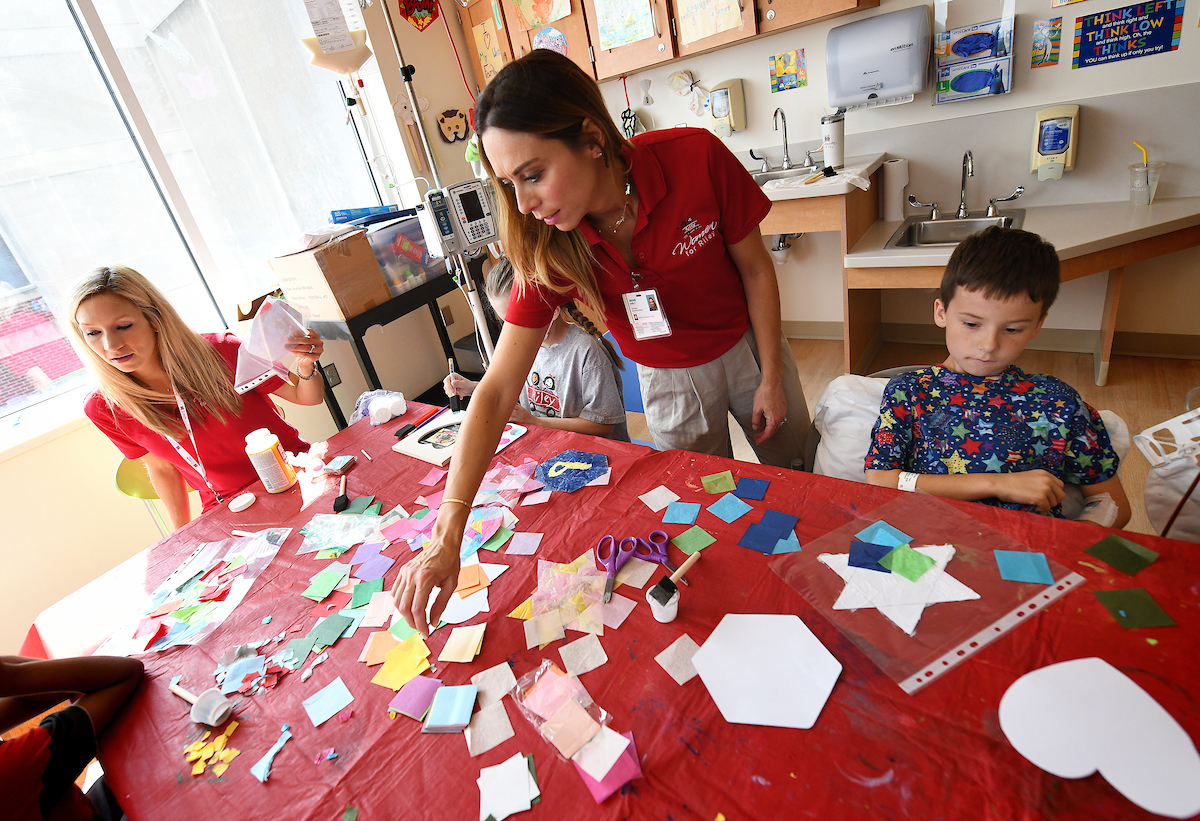 Every third Thursday, members of the group check in at the information desk in Simon Family Tower before heading up to the ninth floor to help children with a craft.

It’s something they look forward to each month, says Lee Neff, who helped launch Women for Riley a decade ago.

“This is a way to really connect to our mission,” she said.

Susan Schwarz, volunteer coordinator at Riley, said the women put a lot of time and effort into each visit.

“It’s a really big deal for that floor, and it’s something for the kiddos to look forward to,” she said.

Child Life Specialist Maggie Huffman, who works with kids on 9 West, said the activities add a dose of normalcy to the hospital environment. 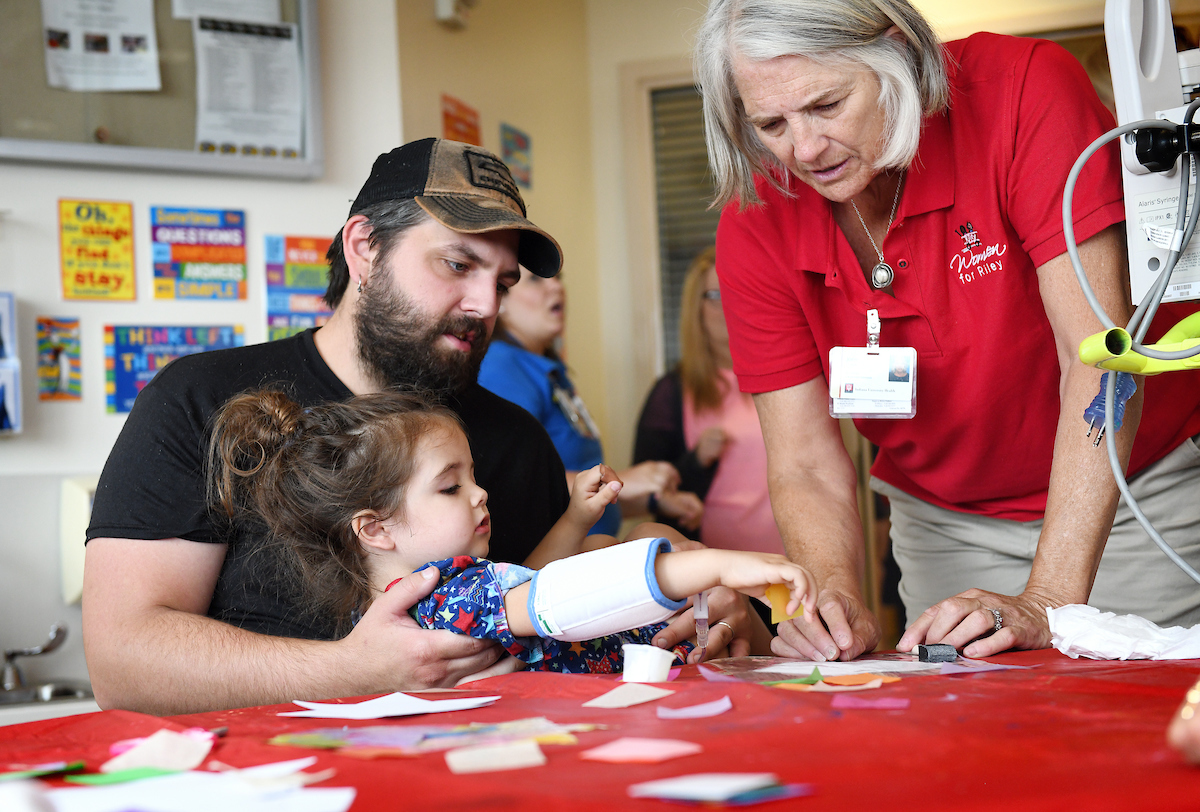 Patients get a chance to get out of their rooms and come down to the playroom, where they meet other kids in a setting that’s relatively normal with toys and crafts, she said.

“I can’t tell you how many times I’ve heard kids say, ‘Look mommy, they have that thing in their arm just like me.’ They make friends, they have fun, and they get a chance to make real choices like what crafts they want to do or what colors they use,” Huffman said.

The rest of their day, they might not get to choose anything, she said. “We tell them they have to take a medicine or they have to do a treatment or they have to have a surgery, but in this space in the playroom, they get to make any choice they want, as long as it’s safe.”

As the volunteers buzz from table to table, helping children with their sun catchers, parents sit quietly, appreciating the smiles and the laughter dancing around the room. 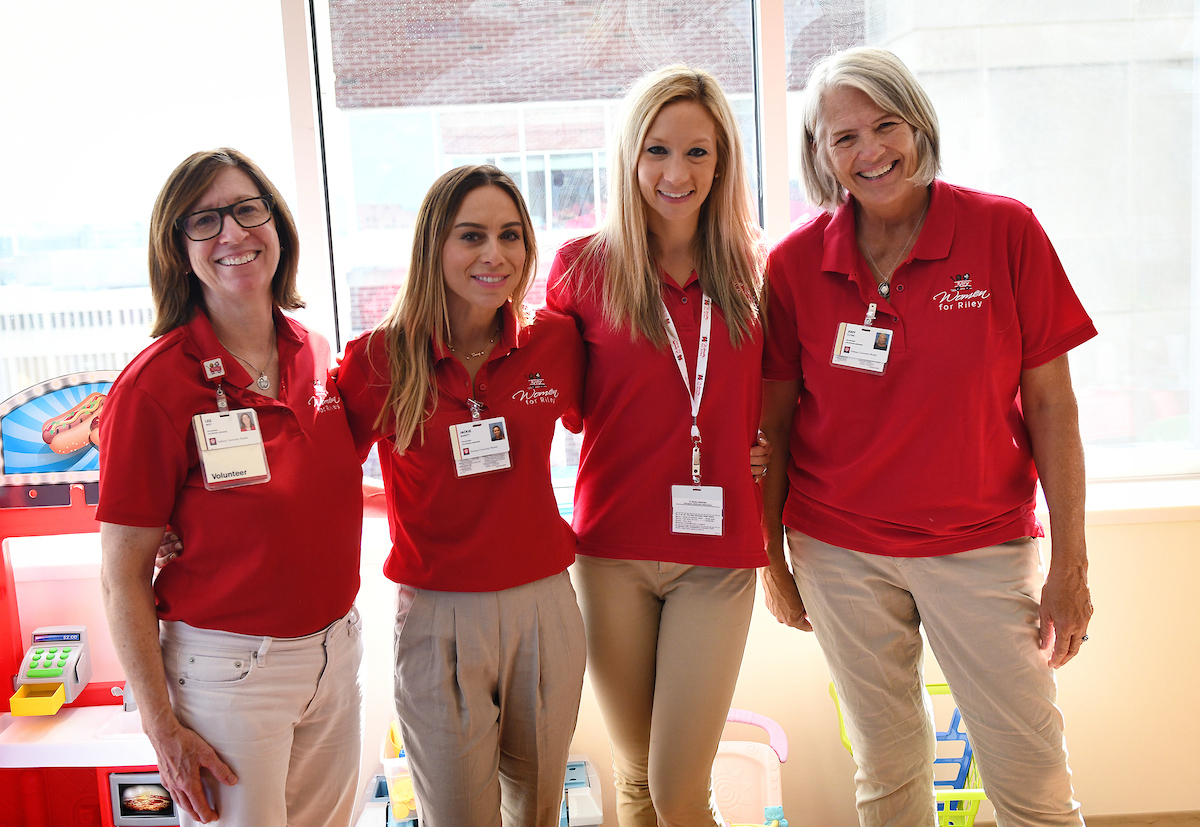 Currently, there are about 150 members of Women for Riley, about 80 of them active, Neff said. But there’s plenty of room for more.

Both young women are mothers of three children, and both had a Riley kid. In Duckworth’s case, her daughter came to Riley for a minor procedure and had such a wonderful experience she didn’t want to leave.

“Even in a scary time, I thought that spoke well of Riley, and it made me feel good about coming down here and spreading a little sunshine,” the former teacher said.

Barrett’s love for Riley began as a member of the Indiana University Dance Marathon team, which raises money for Riley kids. Fast forward a few years, and she was the mother of a Riley kid herself. Her son was in the neonatal intensive care unit at Riley North for six weeks. Today, he’s a happy, healthy 9-year-old.

“He received wonderful care, and it just reinforced our connection with the hospital and made me want to get involved again in a deeper way,” Barrett said. “I feel like this is home.”

Her job, and that of the other women, is to be a light for each child and their family while they are with them.

“Whether it’s through play or crafting or just holding them, reading a book, rocking them, whatever it is that they need,” she said. “That’s really our purpose here. When we leave, there’s a sense of actually making a difference in the lives of these families.”

Learn more about Women for Riley.

All hospital volunteers must go through an interview, health assessment, background check and orientation.