With a voice like an angel, she comforts kids and adults

Riley music therapist Jenny Kaufman believes in the power of music to heal.

For Jenny Kaufman, music is her peace and her passion. Lucky for her and for the patients at Riley Hospital for Children, it’s also her job.

With a guitar strapped to her back and songs in her heart, Kaufman brings the gift of music to the youngest and oldest Riley patients. 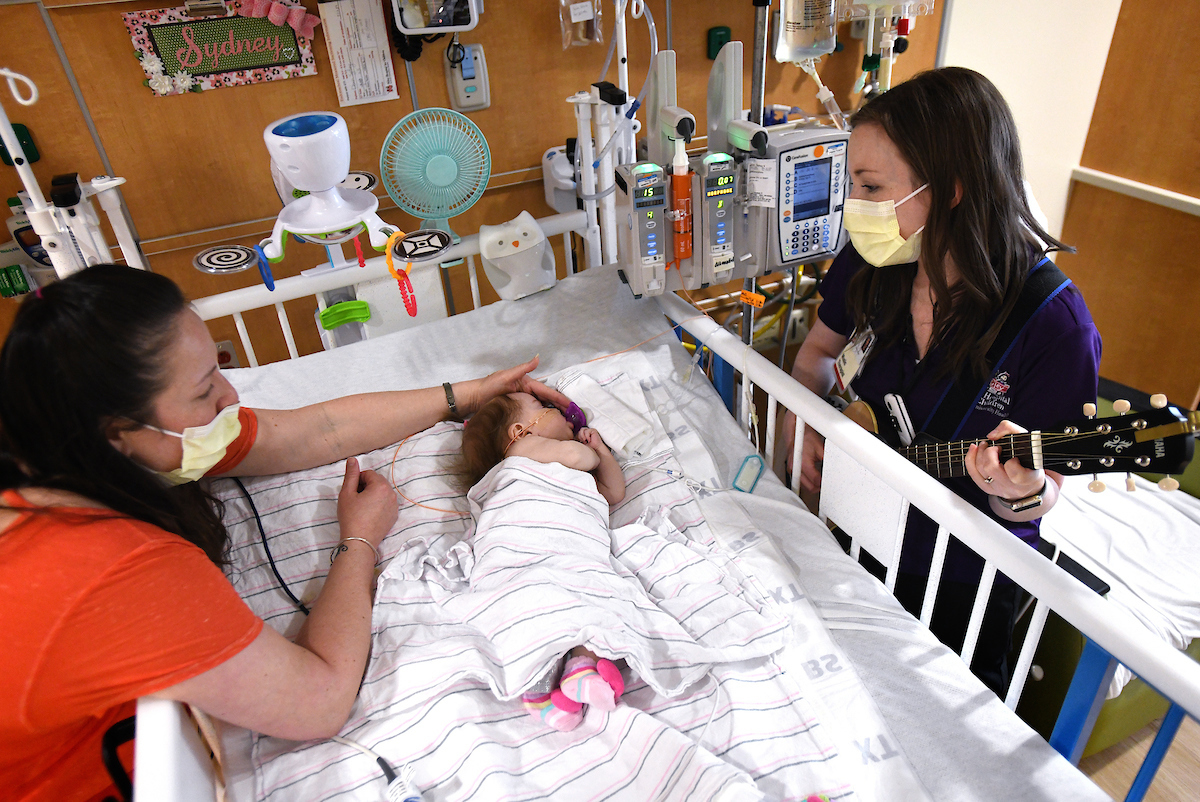 For both, Kaufman strums her guitar and softly sings. The steady beep, beep, beep of the monitors keeps the beat.

Sydney’s grandparents listen from a corner of the room.

“I’ve never heard an angel sing, but this must be close,” said William Maze.

Kaufman is a certified music therapist, one of three who cover the floors of Riley. She concentrates on the PICU, CVICU, the heart center and rehab. The program is funded by the Riley Cheer Guild.

She figures she was destined to find a career in music. She grew up playing piano and studied music and voice in college. But when she discovered there was a field that uses music as therapy, she was all in. With a bachelor’s degree in music therapy, she could have worked in a variety of settings – schools, nursing homes, private practice. But when she did an internship at UPMC Children’s Hospital of Pittsburgh, she found her niche.

And Riley was where she wanted to be. “Riley was a dream job for me, a place I aspired to work.”

That’s because when she was in college, a friend’s baby was a Riley patient. The baby passed away, but Kaufman remembered how her friend talked about the joy of singing to her child. Kaufman, now married with a child of her own, keeps a picture of her friend’s baby by her desk. It’s a reminder of that family and “the power that music can have even when you have the worst outcome.”

As a music therapist, she is there for the good days and the bad. She has created recordings that families will treasure forever – using songs that have given them hope or comforted them on their darkest days, laid over the beat of their child’s heart. 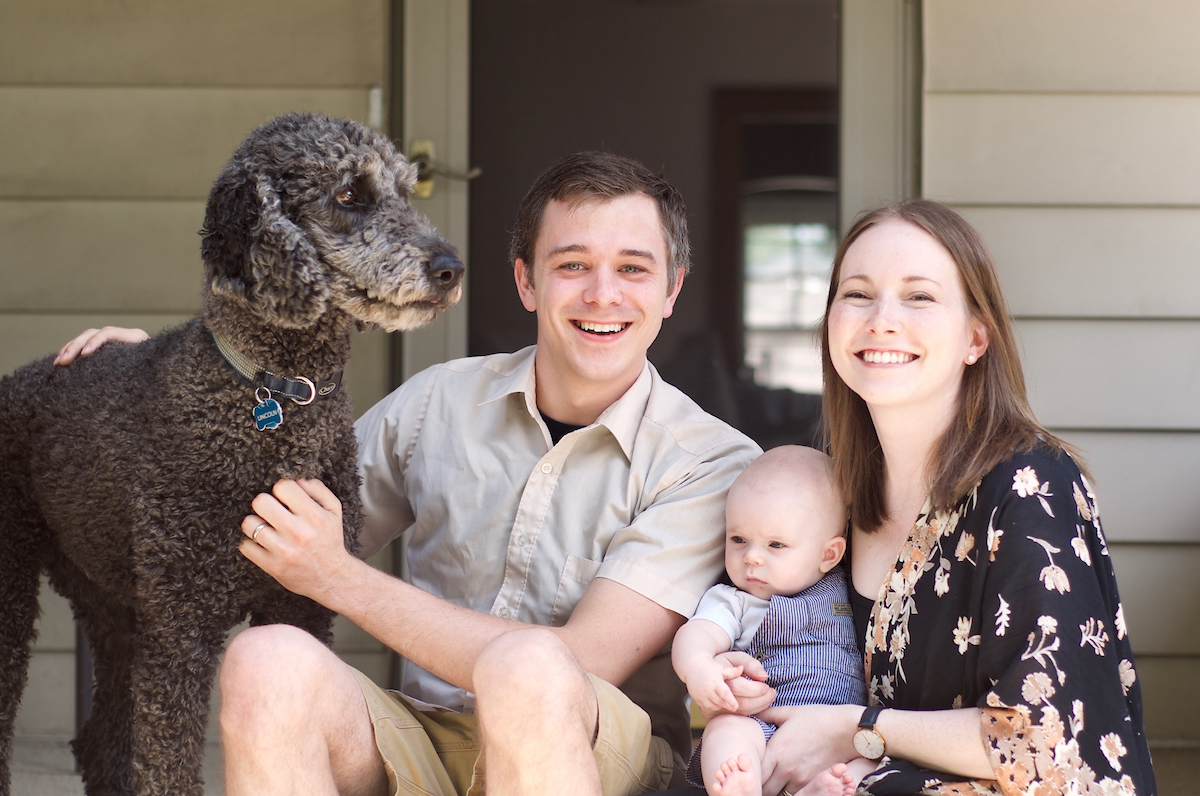 Becoming a mother has helped her grow in her job, she believes. She and her husband, Zach, have a 1-year-old son, Teddy.

“It helps me empathize with families and adds to my perspective but sometimes makes my job harder,” she admitted. “When I put myself in a parent’s situation, it creates extra fears. But it makes me feel stronger for the joys and the little moments of helping kids just play and be normal in whatever way they can while they’re here.”

When she meets a patient or family for the first time, she explains why she’s there. Sometimes people assume she has come to perform, that she’s there to entertain them.

That’s not what it’s about, she said. Any musician can do that. She’s also not there to give music lessons, though she loves to see patients participate in making music – whether that’s beating on a drum, learning a few chords on the guitar, shaking a maraca or singing along with her.

With her therapeutic training, however, she is there to provide support to patients and families. Music can help decrease pain; reduce stress, anxiety and depression; improve physical, cognitive and speech language rehabilitation; boost coping skills; provide appropriate infant stimulation and offer grief and bereavement support.

In Sydney’s case, Kaufman initially worked to keep the baby calm before and just after her transplant. Now as she’s getting better and they are wanting her to be more active, Kaufman works on developmental goals.

HOW CAN MUSIC HELP? 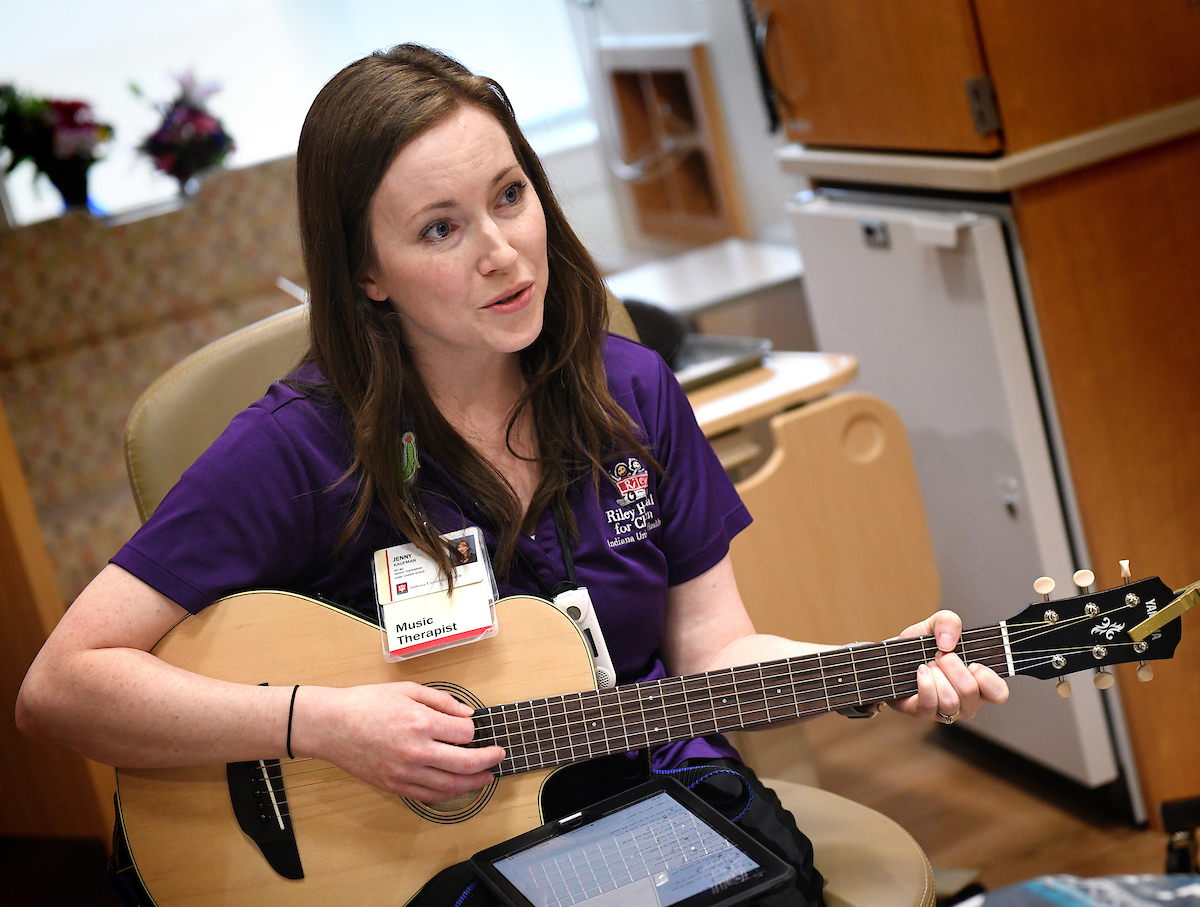 “If a baby or child is here for a long time, under a lot of sedation or there’s not a lot of normal interaction, there is a risk for developmental delays,” she said. “It’s important to provide appropriate stimulation.”

For Sydney, that starts with eye contact, tracking, smiling, reaching for things, kicking and language development. In this case – cooing.

“Music is great for that. The more words a baby hears, the better their language will be later on.”

Kaufman has seen Sydney through many ups and downs during her stay. She was there May 7, the day Sydney got her new heart.

“I had heard her heart was here, and I went in to see the family,” Kaufman said. “There were lots of emotions in the room – excitement, nervousness, sadness for the donor.”

In fact, when Kaufman entered the room, Ashley Deaver was writing a letter to the donor family.

Being able to see families through the good and be a support through the bad is a gift for her just as much as them.

“I get a lot of joy out of my job. It’s fun and fulfilling but also challenging. Each day is so different.”

A SONG FROM THE HEART 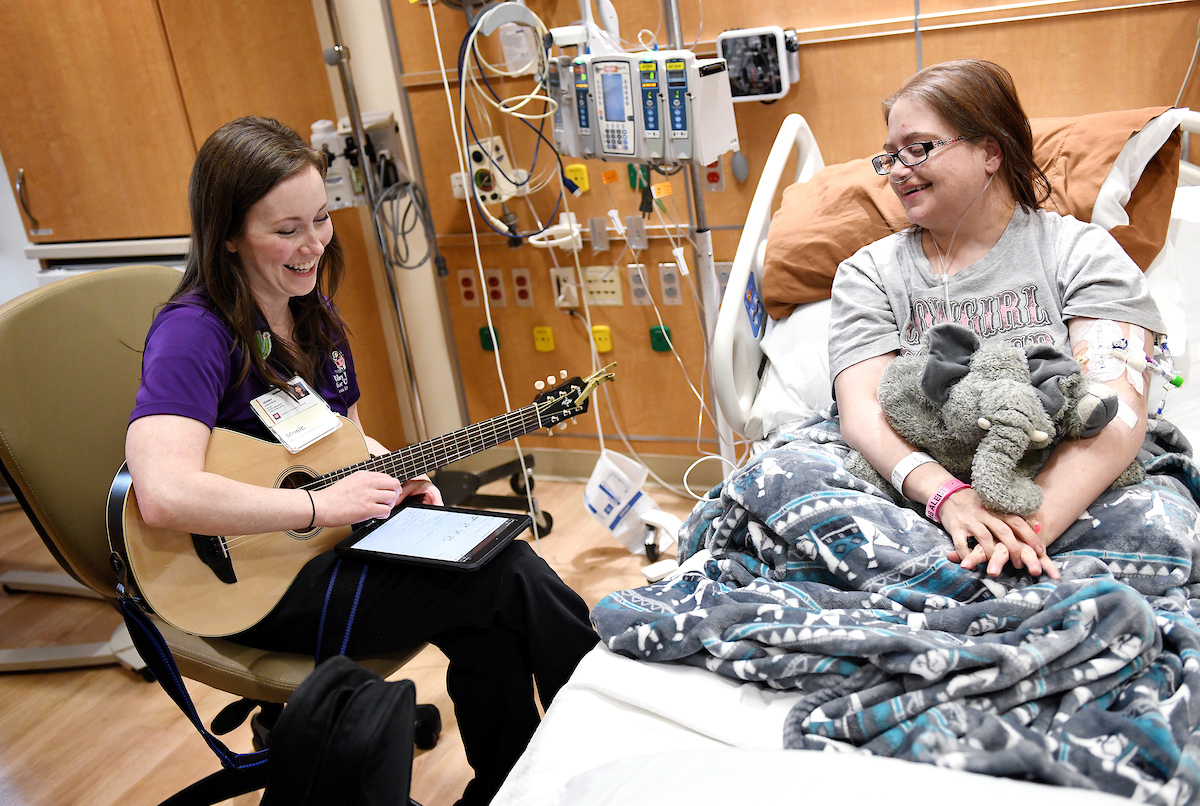 A visit with 38-year-old Shannon Lowe is a bit different than working with the kids on the heart unit. They talk a lot and sing a little.

“It breaks up the day, and she’s good to talk with,” Lowe said about Kaufman’s visits. Lowe has been hospitalized for more than a month as she waits for a new heart. Her family lives in Warsaw, Ind., so she’s thankful for anything that breaks up the monotony of life in a hospital.

Today, she sings along as Kaufman plays and sings “Heaven,” by Kane Brown.

“Everybody's talking about heaven like they just can't wait to go Saying how it's gonna be so good, so beautiful …”

Kaufman reminds Lowe that they still need to work on a song together. The plan is to record Lowe’s heartbeat now, then again when she gets a new heart. They’ll create a song with both hearts as a keepsake.

“You can take it with you into life after transplant,” Kaufman said.

Music therapists need to have a vast repertoire of songs up their sleeve. But sometimes even Kaufman gets stumped. One patient, a 6-year-old, requested the song “Scream” by Christian alt rock band Skillet. Kaufman went back to her office, pulled it up on Youtube and learned it for her young patient. She’s not a screamer, so the song came out a little softer, a little gentler.

“Music is so adaptable,” she said. “I just find what style they like and use it toward the goals they have.”