Where there’s a Will, there’s definitely a way

He suffered a devastating injury, but this teenager found the motivation to heal, thanks to the support and strength of his family and his care team.

Will Covington has his head and part of his face covered with his hoodie when he first comes into the rehab gym at Riley Hospital for Children at IU Health. 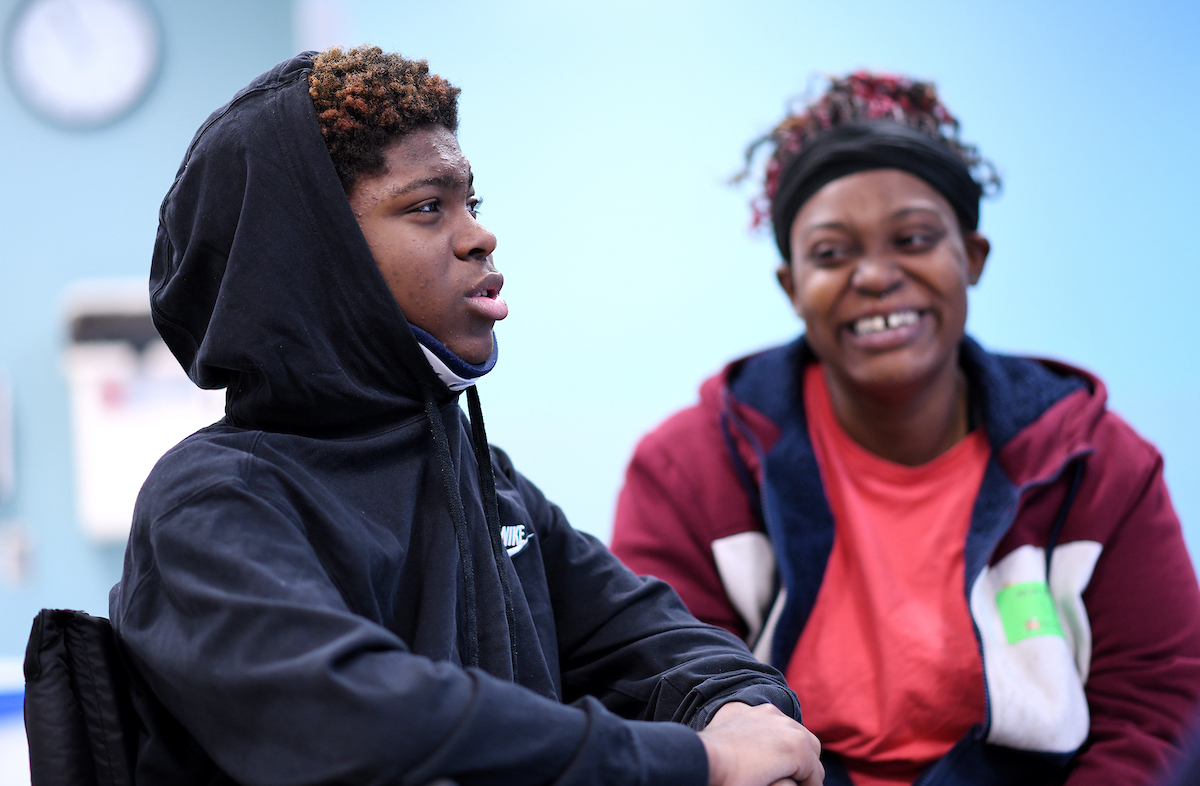 Prodded by his occupational therapist, he pushes the hood back just enough to reveal a mop of curls and a brilliant smile.

That’s enough to make OT Kelly Salter smile. She has worked with Will for six weeks, ever since he arrived in the rehab unit in early February after treatment for a gunshot wound in early January.

Will is 13. He’s an eighth-grader in Lawrence Township Schools. A big brother to four younger siblings. He’s a conscientious student who loves math. He’s a charmer.

In the nearly three months that he was hospitalized, before being discharged March 20, his school closed due to the COVID-19 outbreak, he wasn’t able to see his siblings, and he found out he couldn’t walk.

But Will is upbeat.

When he hears that his school likely won’t reopen for the rest of this academic year, he says, “I’m cool with that. I already did most of the work anyway.”

Will suffered a spinal cord injury and is temporarily paralyzed from the waist down. But don’t suggest that the injury changed his life. Here’s what he’ll tell you.

“No, it didn’t. Everything is going to be same, the only thing different is I’m in a wheelchair. Other than that, it’s cool. I’m still the same person.” 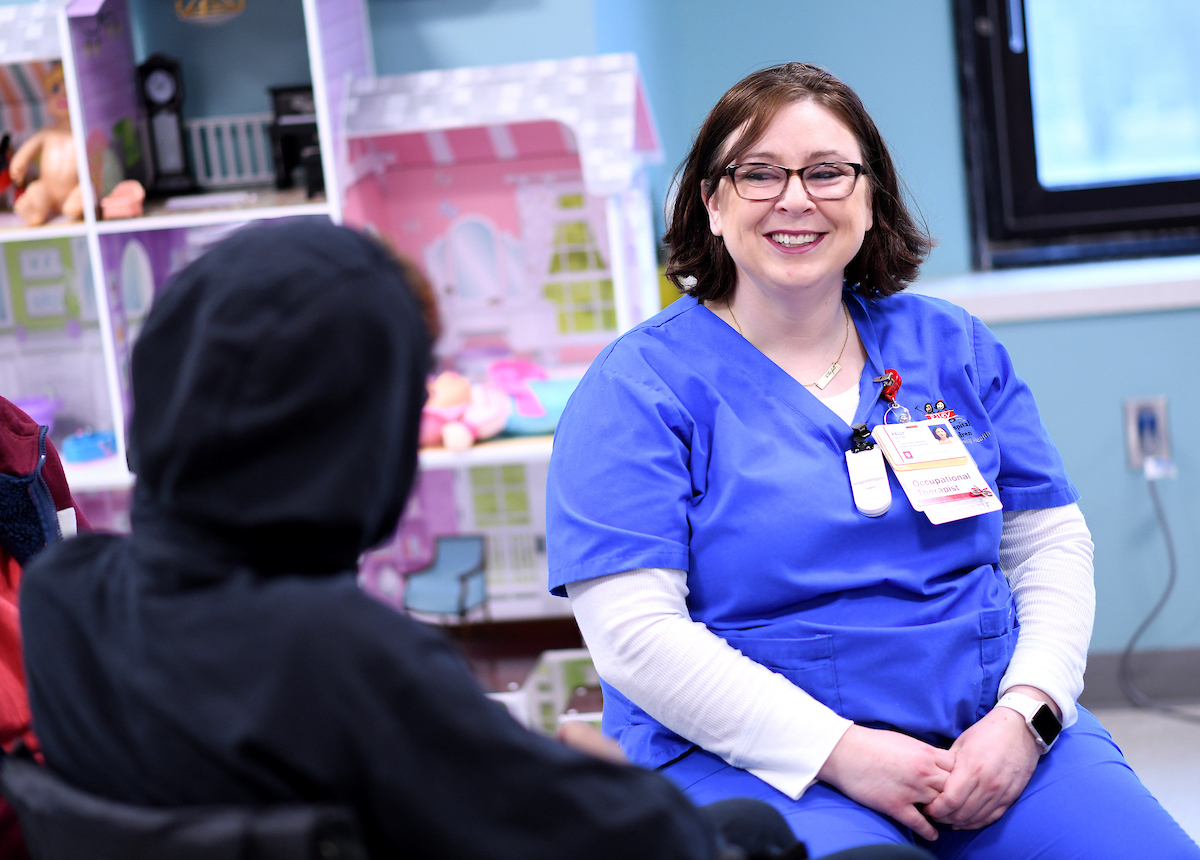 As her patient talks, Salter smiles, encouraged by his positive attitude and his can-do spirit. It wasn’t always this way.

“This kid came to us and couldn’t even sit up on his own. Remember that?” she asks Will.

Understandable for sure. He was a 13-year-old boy who loved to play basketball and football, loved to wrestle with his siblings and loved to dance and hang out with his friends.

All of the sudden, he couldn’t do any of that. He shut down.

“It took a bit for us to get here,” Salter said. “But he has surpassed any expectation that we had in the six weeks he’s been here. We knew he had the potential with the type of injury he has. We anticipated there would be some recovery, but it’s very motivation-dependent,” she said.

“And we struggled with motivation in the beginning. He got a little mad when stuff was hard, but he turned the corner when he realized that the more we practice something, the easier it becomes.”

The turning point, she said, was when he realized “this is the body he’s in and it doesn’t change who he is, but it’s not going to get better if we don’t work at it.”

Salter said it took some tough love and some long talks to get Will on the path to healing. She says she treats her patients like they are her children – Will even calls her “Mama Kelly” – and that requires some heart-to-hearts sometimes.

“I have two kids, and I can’t help but put myself in these families’ shoes,” the therapist said. “Sometimes that means some tough love, but it also means coming to every family from a place of empathy and understanding.”

She thinks about what families are going through, knowing these are hard times made even harder with the visitor restrictions required, first by the flu, then by COVID-19.

“We all in the hospital have the potential of being separated from our own kids if something goes south,” Salter said. “Just the thought of that has given me an even greater perspective about what these families are going through on a daily basis.”

Will’s mom, Tanika Allen, is grateful to have her funny, loving, protective son back. The pull between hospital, home, school and work has been a lot, she said.

“I’m definitely thrilled to take him home tomorrow,” she said. “It’s been a long road. I want all my babies together. We’ve never had to deal with a situation like this where we’ve had to be apart so long.”

Salter says Allen is a champ. “You never know how strong you are until you have to be and you all have done it,” she said. “You’ve done it too, Will.”

The teen laughs and says, “I’ve done it the most.”

During his stay at Riley, Will has continued to play the big brother role, reminding his siblings to do their schoolwork, trying to mediate disagreements over the phone.

“I told them when I get home, I’m gonna run over all their toes,” he laughed, as he talked about adapting to life in a wheelchair.

Not that he’s content to stay in the chair. When he first arrived in rehab, he wasn’t able to even sit up, had little mobility in his left arm, and could not do any of his self-care independently, Salter said.

By the time he was ready to leave rehab, he was able to stand and take a few steps with help from a therapist. And he could transfer from his wheelchair to another surface and back again.

“At this point, he’s darn near able to do everything for himself, maybe just with somebody watching to make sure he doesn’t slip and fall,” Salter said.

Salter will miss this fun-loving patient. She’ll miss the way he helped coax other rehab patients out of their shell, how he served as the unit DJ, keeping a playlist of R&B songs going – except when the little kids were around, he said. For them, he played “Baby Shark.”

“Kids are here because something serious has happened in their life,” Salter said. “He wasn’t the happiest guy when he got here, but then he realized we really are a family on this unit and he wanted to help the other patients get through.”

Will says that’s his nature. “When things go wrong, I want to pitch in and make people happy. I want to talk to kids going through the same thing and tell them it’s OK, you can get through it.” 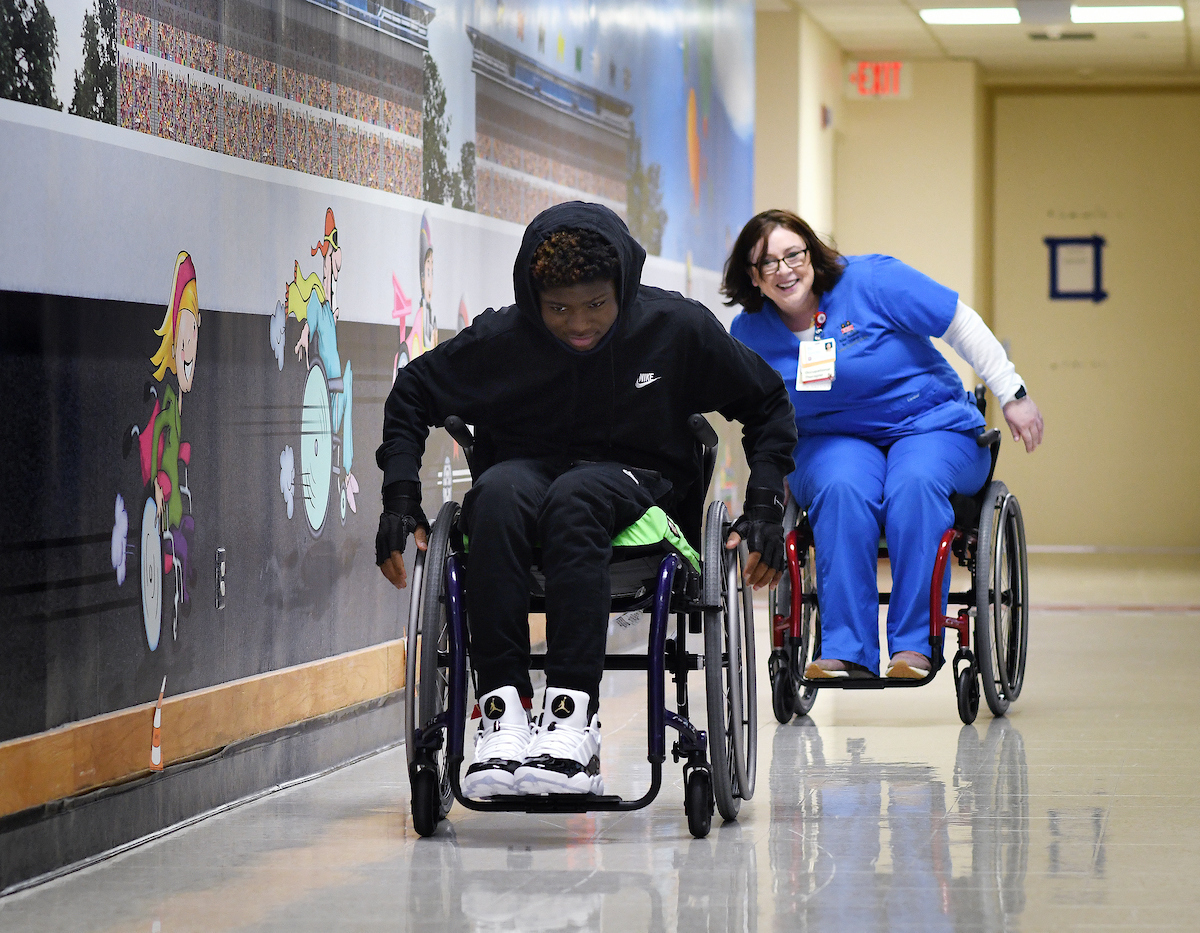 During his time in rehab, before the strictest coronavirus restrictions went into effect, Will and Salter could often be seen taking trips down to the Red Wagon Café and to the gift shop to practice navigating small spaces in a wheelchair, even outside to practice rolling over curbs.

“He’s right when he says not a whole lot has changed,” Salter said, turning to speak to Will. “There’s been a major change, but the way that you’ve adapted to it is such that the rest of your life looks pretty much the same except for the way you get around.”

Will had to have the last word here.

“I can get around faster than you all walking.”

And just like that, he was off to the races.