When her little girl finally spoke, it was music to mom’s ears

“There was a point in all of this, when she couldn’t talk, and seeing her with a feeding tube, I wondered if I made the right decision … but now I’d do it a hundred times over.”

It was the first word 5-year-old Ava had spoken in weeks, ever since she was treated for hydrocephalus following brain surgery to eliminate the seizures that wracked her tiny body.

The surgery by pediatric neurosurgeon Jeffrey Raskin to stop the seizures was the only option left for Anderson residents Angie and Lee Delaplane to help their only child, who began suffering nighttime seizures when she was 3. Those episodes intensified last year to the point that medications were no longer able to control them. She began seizing throughout the day.

“She couldn’t focus. It was almost like she was looking right through you because she was constantly having them,” Angie said. “She would just stare off.”

Someone else might not notice, but mom knew when it was happening.

Ava was diagnosed at about 8 months old with a cortical malformation on one side of her brain, a condition increasingly recognized as a cause of epilepsy and developmental delay. Angie had noticed some left-side weakness in her daughter and took her to see Dr. Kristyn Tekulve, neurologist with Riley Hospital for Children at IU Health. Dr. Susan Conrad would later join Ava’s medical team.

Before the seizures got so bad, Ava was a typical child. She loved to sing and dance, do puzzles, play with her toy cash register and play outside. Eventually, her parents had to restrict her activities.

“We had to tell her not to be a kid,” Angie said. “No running, no jumping. She had to sit down to play, she couldn’t go outside.”

It was a tough situation, acknowledged Dr. Conrad. Ava’s seizures “were impairing her day-to-day activities and cognitive functioning.”

After discussing their options with the neuro team, they agreed to let Dr. Raskin perform a radical operation called a functional hemispherotomy on Ava. That decision has given the couple their little girl back, Angie said.

“There was a point in all of this, when she couldn’t talk, and seeing her with a feeding tube, I wondered if I made the right decision,” she confessed. “It was a hard decision to come to because of all the deficits she could have had, but now I’d do it a hundred times over. Just seeing how she’s talking and walking even better from two days ago is just amazing to me.”

While a hemispherectomy involves removing a portion of the brain where seizures are active, a hemispherotomy is a disconnection of the cerebral hemisphere from the rest of the brain. Both are used to isolate abnormal brain activity, but the procedure Ava had typically involves fewer complications.

Ava was an exception.

About a week after the Jan. 10 surgery, she developed hydrocephalus (fluid on the brain). She had to have a second surgery the following week to put in a shunt to drain excess fluid from her brain.

Before that, she was talking well, said Angie, who wrote down in her phone everything Ava said: “I got the hiccups,” “I’m scared,” “Take me home.” When she got the hydrocephalus, it all stopped.

It was a dark time for Angie, Lee and the rest of the extended family who had kept vigil by her bedside.

“After that it was almost 2½ weeks and she hadn’t said anything,” Angie said. “It was scary when she regressed.”

But then out came the word “Mama” one day when she was eating, and soon the words began spilling out of the child, who will celebrate her 6th birthday next week.

“Last week we were lying in bed, and I was going to put her down for a nap before therapy, and she said, ‘Mama, will you read me a story?’ ”

It was music to Angie’s ears.

“It made my heart so happy. I told her a story, and then it was just like she used to be.”

Ava asked if she could watch her favorite show, “Elena of Avalor,” then she wanted to know when she could go to her grandparents’ house, and finally, when could she go home.

“It’s been so wonderful hearing her sweet little voice,” her mom said. “She is my world.” 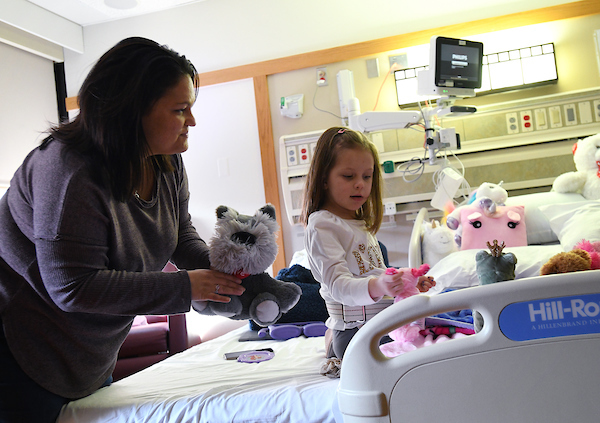 Dr. Raskin said Ava has made “incredible neurological gains” and is now seizure-free, highlighting Riley’s Comprehensive Epilepsy Program. “But also critical to her care are the rehab doctors, nurses and therapists, as well as her loving and supportive family. When we all come together for these kids, they flourish.”

“We did suspect she may have some trouble with walking and talking after surgery. However, she has been recovering these skills very well over the last few weeks. We are very hopeful that she will remain seizure-free and eventually return to school.”

If all goes well, Ava is scheduled to be released from Riley’s rehab unit on March 5. She has three hours of therapy daily, which sometimes makes her a little irritable, her mom said, but the progress she has made continues to impress her family and her therapists.

“Every day she gets better,” Angie said. Not only with her speech but with her mobility.

She’s walking fairly well on her own, she is able to go up and down stairs, and she’s able to climb up onto her bed. In fact, during an interview in her room, Ava was up and down repeatedly, with mom right by her side. The two took a walk through the rehab unit, greeting staff and patients alike. The day before, they even went down to a gift shop in the hospital. 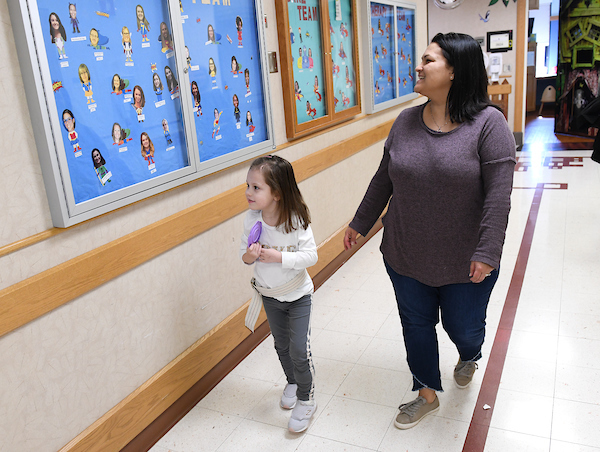 “She’s almost walking better now than she was before surgery,” Angie said. “She’s making up for lost time. It’s wonderful, but it keeps me busy.”

Angie has not left her daughter since her Jan. 10 surgery. She sleeps on a cot right beside Ava and says she’ll be there until Ava is discharged.

“I’m not going home until she goes with me.”