What Are The Odds? Two Riley Nurses Make Colts Cheerleader

People call them the dynamic duo. Lori Stanley and Rachel Janitz beat out hundreds of other women to make the NFL squad.

They were working out at the gym, taking the same class, when Rachel Janitz spotted Lori Stanley.

They hadn’t seen each other for a good while, since Ball State University, where they both graduated with nursing degrees.

So, they did a little catching up.

And come to find out? Both were going for an elite side job – trying out for the Indianapolis Colts cheerleading squad.

The women’s acquaintance status quickly catapulted to best friend level. And last month, the duo managed to outperform hundreds of women going for the prized gig. 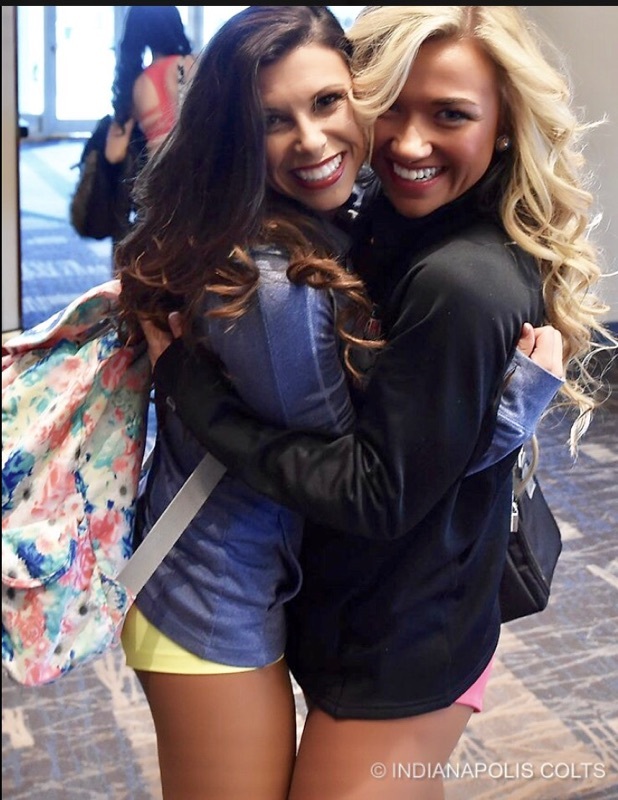 They were named Colts cheerleaders.

“I honestly don’t think I could have done it without her,” Janitz said this week inside Riley.

Both women are 24 years old, but say they are polar opposites. People call them the dynamic duo. Janitz is the blonde one, the single blonde. Stanley is the brunette, married to husband Alex Stanley.

Janitz’ job in the operating room is minute-to-minute. It involves trauma cases and days that can change in an instant. Stanley’s job in transplant and neurosurgery is more planned out.

As the assistant coordinator of plastic and oral maxillofacial surgery, Janitz says the operating room is her love. She thinks of it as a great symphony where all parts must be in harmony to work.

She likes being surrounded by “brilliant minds” who teach her and make her better as they operate. She likes that, in her role, she gets to focus on one child at a time, giving that patient 100 percent of her attention.

“And I like that every day I see wild and crazy things and I never know when I step my foot in the door what my day is going to be like,” she said. “Any sort of emergency could come in and any sort of condition that I’ve never seen before.”

There was a patient who suffered a gunshot wound and his face was destroyed. There was the little girl, whose hair got caught in a go-cart and her scalp was torn off.

“We try to make a child feel as confident and wonderful on the outside as we see them from the beginning,” she said. “It’s magical.”

For Stanley, her job is magical in a different way. She loves connecting to patients and building long-term relationships with them.

In her role, she helps as patients prepare for transplants and after they have received transplants. She works with kidney, small bowel, liver and multivisceral transplants.

Stanley said she wouldn’t choose any other job. She always knew she wanted to work with kids and at Riley. And for the past several years, she has also wanted to be a Colts cheerleader.

Hundreds of women want to be Colts cheerleaders, and hundreds tried out. But on March 26 backstage at Hilbert Circle Theatre, just 49 were left.

This was the moment when the final 26 would be named to the squad. Coach Kelly Tilley walked back, holding the results in her hands. The judges had finished collaborating.

“Be proud of how far you’ve come,” she told the women. “No matter what, this is a very proud moment for you.”

Then, as the women stood in a circle, the numbers of the 26 who made the team were called.

“No. 10.” Tears started rolling down Janitz’ face. Stanley was No. 10 and her Riley partner had made it. Not long after, Janitz heard her own number. “No. 13.” Stanley was ecstatic for her friend.

And then, the time for celebrating quickly ended and the madness began. The women who made the squad were handed uniforms.

They had to quickly get dressed and go back on stage to perform for the first time as the 2017-18 Indianapolis Colts cheerleading squad.

And as they danced in that theatre, Janitz and Stanley looked out into the audience to a sea of people they knew, including an entire section of Riley coworkers.

“It was awesome,” Janitz said. 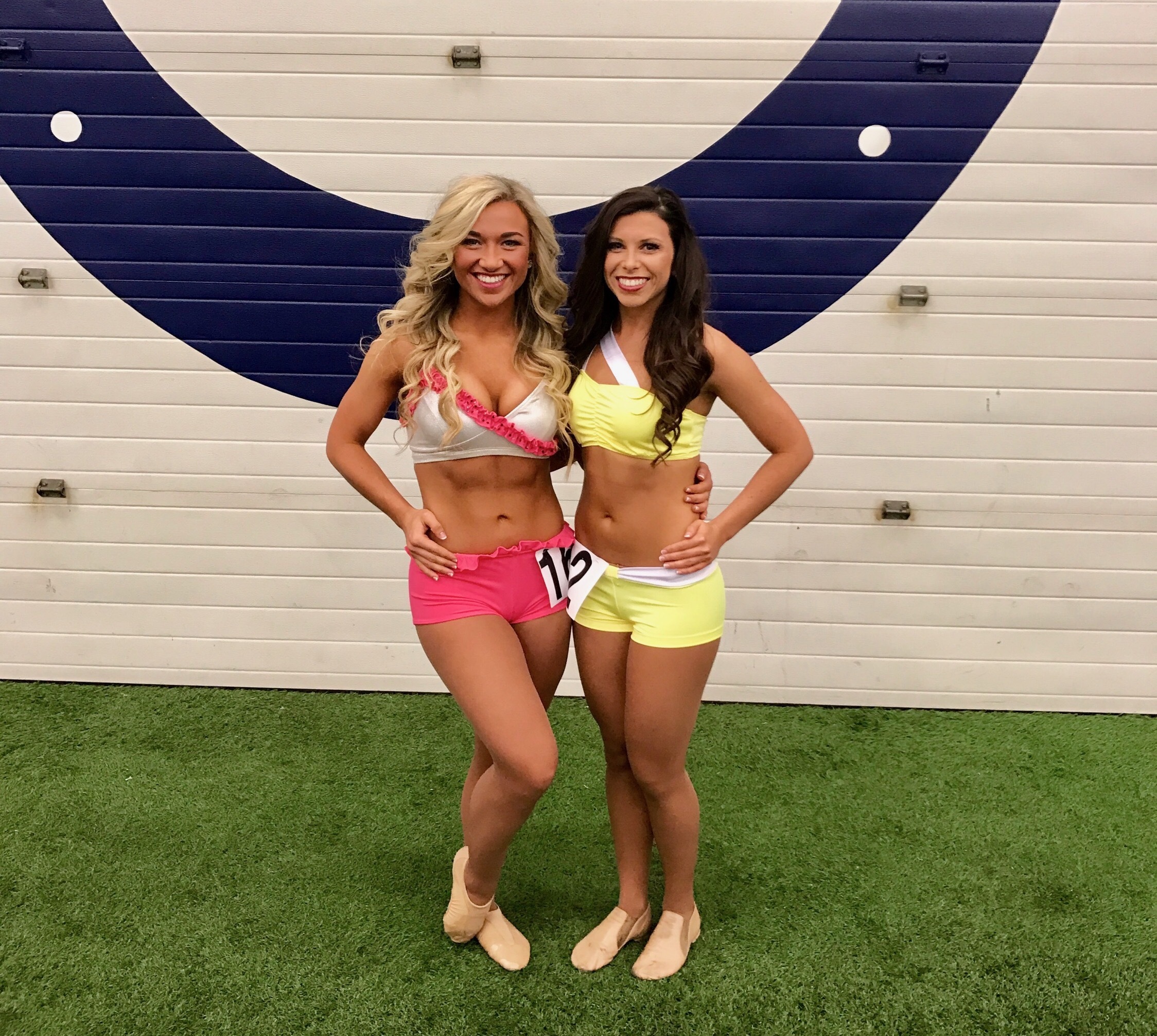 They know all about the stereotypes, the cheerleading ones.

But these women aren’t just pretty faces with pom-poms on the sideline at Colts games. They are professionals. Janitz and Stanley prove that. Riley picks the cream of the crop to work for its hospital. The Colts organization does the same when it chooses the women to represent it.

These women are “amazing. Everybody has amazing backgrounds,” said Stanley of the Colts cheerleading team.

“The stories of these women. You had no idea they had gone through this or had this much education or this job or they do this in their free time and it’s so great to learn that about each other and to be that role model for our community,” she said. “There are so many aspects people don’t think of when they hear ‘NFL cheerleader.’”

“I think everyone just thinks of you as this person on the sidelines on the field with your pom-poms,” she said. “But, realistically, that’s 10 home games a year. We are active representatives of the community, 200 appearances a year. There is so much more than meets the eye there.”

OFF THE FIELD, OUT OF THE HOSPITAL

Hard to believe there would be time for anything else right now. But these women manage to find it.

There is the extra working out – beyond the scheduled Tuesday and Thursday night practices. There is a Colts swimsuit calendar shoot coming up in the Dominican Republic.

Stanley and her husband, a CPA, also just purchased a brewery. They will open a franchise of Books & Brews in Carmel this summer. Alex will transition out of accounting to run the taproom full time.

“So I became an NFL cheerleader, and a week later, I bought a brewery,” Stanley says. She almost can’t believe it herself.

She and Alex are huge baseball fans; he pitched in college. So they travel the country with a goal of seeing every Major League Baseball stadium. While in the city, they always check out the breweries, too.

Janitz’ free time is usually spent anywhere but home. She fancies herself a traveler.

“On the weekends, I can be found in not Indiana,” she says. Though now, as a Colts cheerleader, she will be in Indianapolis a lot more weekends.

She likes to travel the United States. Her goal is to visit every NFL stadium. Last year, she went to the Bahamas, Canada and the Dominican Republic. She has a trip to Europe planned in the not so distant future.

“My favorite thing is to experience something for the first time,” Janitz said. “So I’m always chasing that feeling.”

Looks like she and Stanley both just accomplished that.

-- By Dana Benbow, Senior Journalist at IU Health. Reach Benbow via email dbenbow@iuhealth.org or on Twitter @danabenbow.