“We gotta go, Lillie caught herself on fire”

Kindergartner was burned over 68% of her body, but physical therapy is helping to restore some of what she lost.

When Amanda Robinson left her little girl to go to the store the day before Thanksgiving, 5-year-old Lillie was in her bedroom playing on her tablet. Her uncle was downstairs.

Robinson told her daughter she was going to pick up daddy from work and would stop at the grocery to get supplies to make desserts for the next day.

“If you need anything, Perry’s downstairs,” she told Lillie. “OK, bye, I love you,” Lillie yelled out. 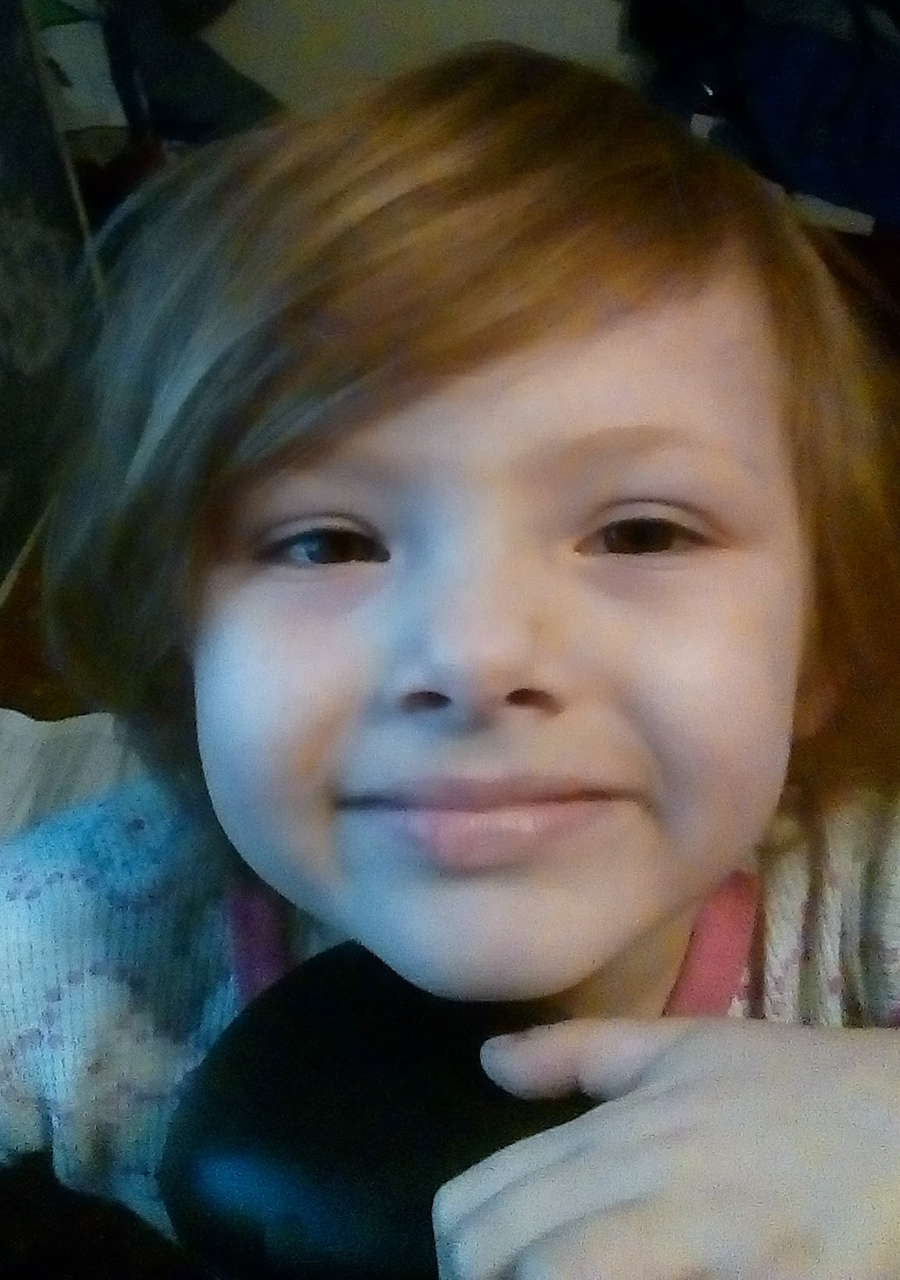 Not long after that, Robinson and Lillie’s dad, Brian Bray, got a panicked call from her brother, Lillie’s uncle.

“I’ll never forget it, I was in the cake pan aisle. Her dad was at the end of the aisle waiting for me,” Robinson said. “I came down, and he said, ‘We gotta go, Lillie caught herself on fire.’ ”

When Robinson got on the phone with her brother, she could hear Lillie screaming. She told him to call 911.

When they arrived home minutes later, Lillie’s dad went in first. “I heard him say, ‘Oh my God.’ Lillie’s uncle had smothered the flames, but her injuries were severe.

This is what Robinson saw: “She was crouched down (under a blanket), and her hair was burnt.”

It was what she said next that still makes Robinson choke up: “I’m sorry, Mommy.” 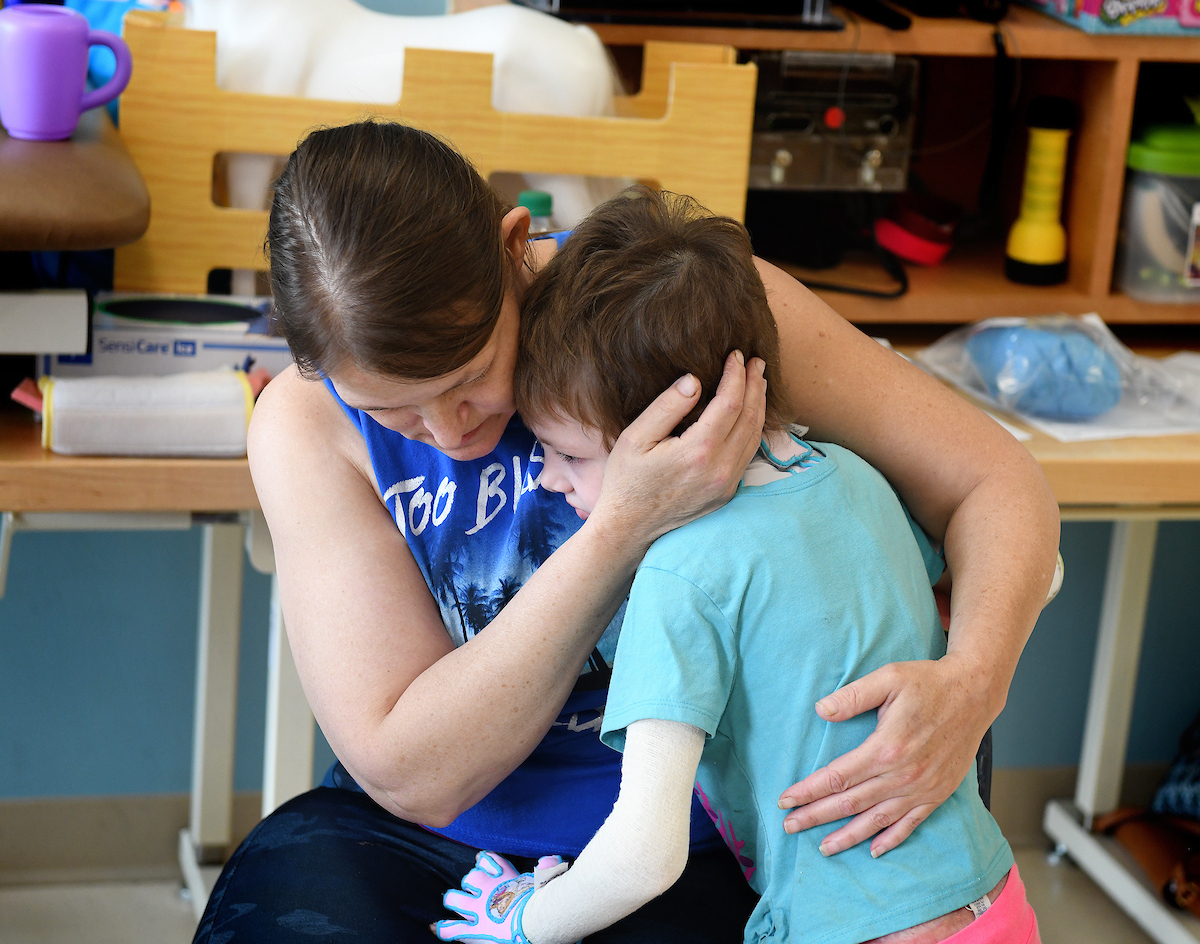 Lillie was rushed to Riley Hospital for Children at IU Health with severe burns over 68 percent of her tiny body.

There would be no Thanksgiving dinner at home this year, though co-workers and friends made sure the family had a meal. For the next two weeks, Lillie’s parents were by her side night and day.

Those two weeks stretched into two months, then three months. Through Christmas, New Year’s, Valentine’s Day, right up to Lillie’s 6th birthday in March. She was released March 5, but her journey was far from over. 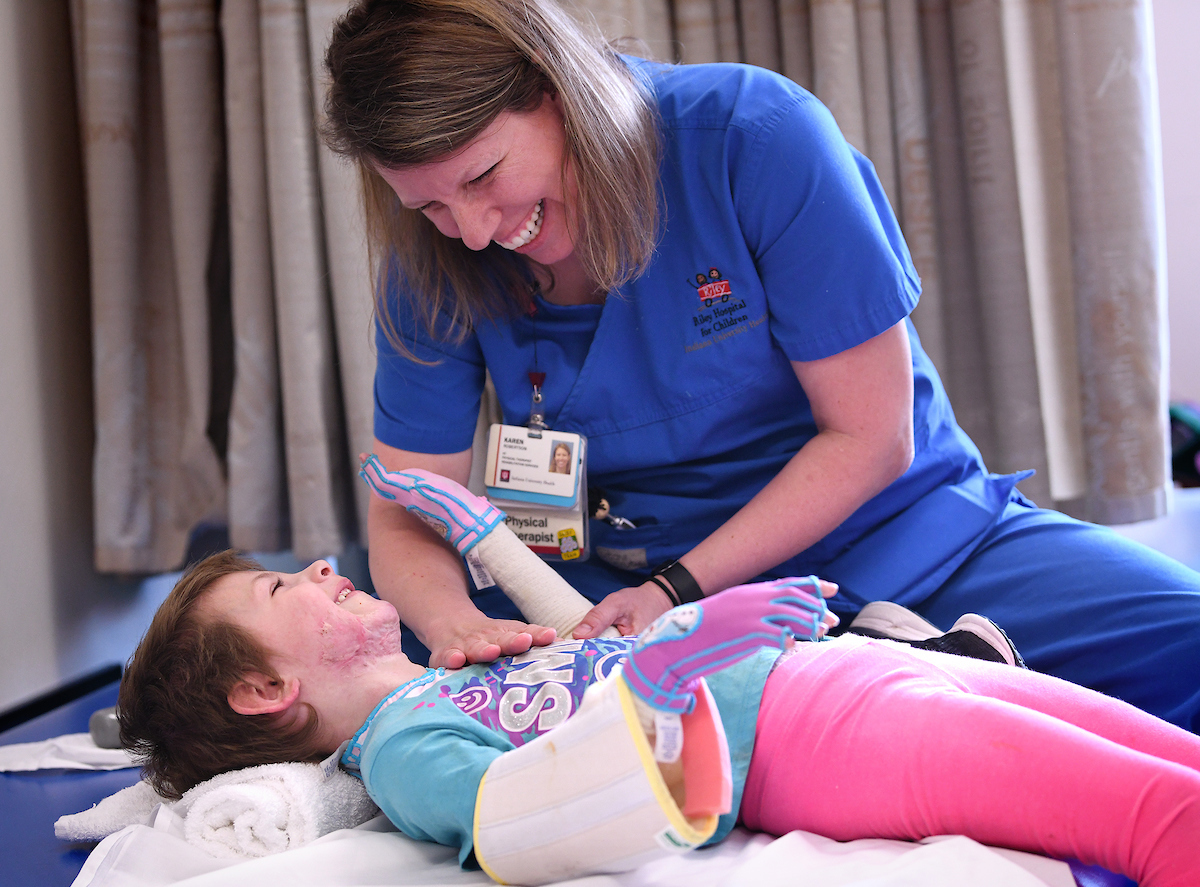 Robertson cajoles and encourages Lillie through the hour-long session, one of two the child has that day. She comes to Riley with her mom four days a week for outpatient rehab.

Robertson has worked with her since she was in-patient. Her progress is slow, but steady.

“Some of her fear holds her back,” Robertson said. “It is scary; they remember when they hurt here so anytime we stretch she’s afraid before it actually hurts. She is so precious, she can bounce back.”

Lillie, who has endured more than a dozen surgeries since the accident, doesn’t hold back during therapy. She cries, she laughs, she resists, and she works – stretching her arms, her fingers, her legs – to improve her range of motion and her ability to do things for herself.

When she first came home after 3½ months in the hospital, she refused to feed herself, her mom said.

“She was very crabby the first month at home. I was concerned because she is normally so full of life,” Robinson said.

The youngest of Robinson’s three children, Lillie has always been a little spoiled, her mom said. In the hospital, her family gave her whatever she wanted. It was the least they could do, they thought.

But Robinson would walk through fire herself to take this burden off her child.

“I’ll never be able to wrap my head around how Lillie can deal with this. I try to put myself in her position all the time. When she cries, she makes me cry. It’s hard.”

As if on cue, Lillie, wearing a sparkly shirt that says “smile,” whimpers. “I can’t, I can’t,” when asked to stretch out first her left arm, then her right in front of a mirror. But Robertson is right there, pushing gently, compassionately. “Girl, you can. Just like that, arms up, legs out. Good job.”

Sure enough, Lillie does what she is told and the crying stops. It goes like this throughout the session. At one point, Robertson has Lillie lay flat on a scooter, feet up, using her hands to push herself forward. She keeps going out the door and down the hall, stopping to tell Robertson, “You have pretty socks.”

“She is the cutest girl you’ll ever meet in your whole life,” Robertson says. “She has a very tough injury because everything’s connected.”

“And it hurts!” Lillie says. Because she is always listening, always observing.

SHE KNOWS SHE CAN’T GIVE UP 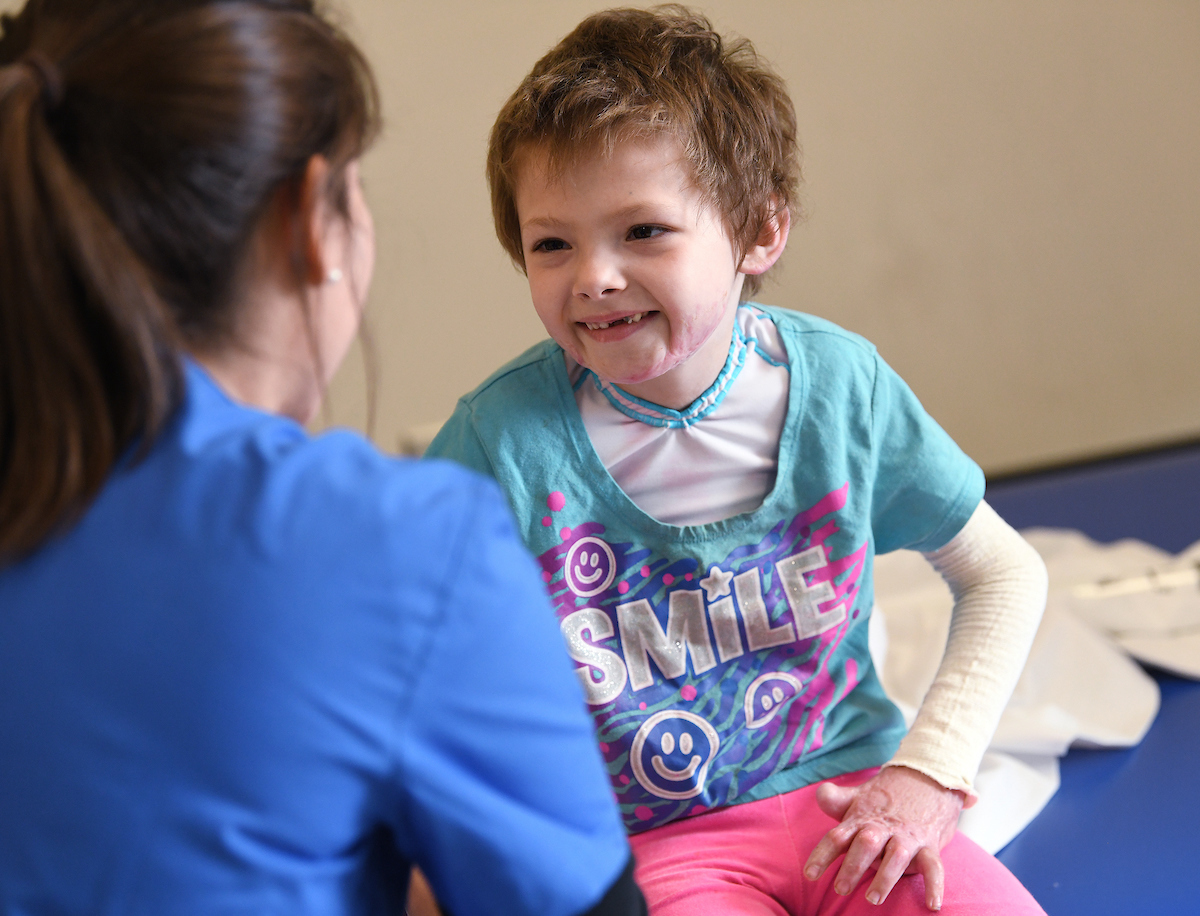 “She just perseveres,” Robertson said. “She’ll have a moment, but then she gets right back to it.”

When Lillie, with her pink painted toes, returns from her scooter exercise, she tags the mat, pulls herself up, makes a face, then comes over to her mom for a hug. “I love you,” the little girl says.

Lillie will repeat kindergarten this year because she missed too much school last year, but she’ll have the same teacher, which makes her happy. She’s adapting to home better now, making more of an effort to do things for herself. But she has been reluctant to play outside, something she used to love to do.

“I tried to tell her that I don’t want the accident to change her. She’s my baby girl,” Robinson says.

In so many ways, Lillie hasn’t changed. She still loves Barbie dolls, Skittles, chicken nuggets and her kittens. She can’t wait to get her ears pierced – “I want heart earrings.”

In other ways, she’s a different child. The trauma of the accident is always there, but Lillie is strong, her mom says. “She knows she can’t give up.”