Two mothers, two 10-year-old girls. So much pain and so many questions

Debilitating pain sucked the joy out of two young girls. A visit to Riley gave them back their lives.

The physical pain for Corinne Kollen and Allison Bowman was intense. But the ache their moms felt for them was almost as bad.

Corinne, daughter of Craig and Renae Kollen, lives in Fort Wayne. Allison, daughter of Sean and Christine Bowman, lives in Zionsville. They don’t know each other, but they have something in common.

It is a somewhat rare and mysterious condition referred to as complex regional pain syndrome (CRPS) or reflex sympathetic dystrophy (RSD). While it is sometimes preceded by an injury and usually involves one of the extremities, it can occur when there is no injury and can spread to other extremities or involve the entire body, explained Dr. James Tolley, medical director of the Riley Chronic Pain Center.

In Corinne’s case, it was her leg. For Allison, it was her arm. For both, it meant weeks of debilitating pain, countless doctor visits, multiple X-rays and MRIs and zero answers – until they came to Riley Hospital for Children and saw Dr. John Dormans, chief of pediatric orthopedic surgery, and Dr. Tolley.

It started with a fall during a hike 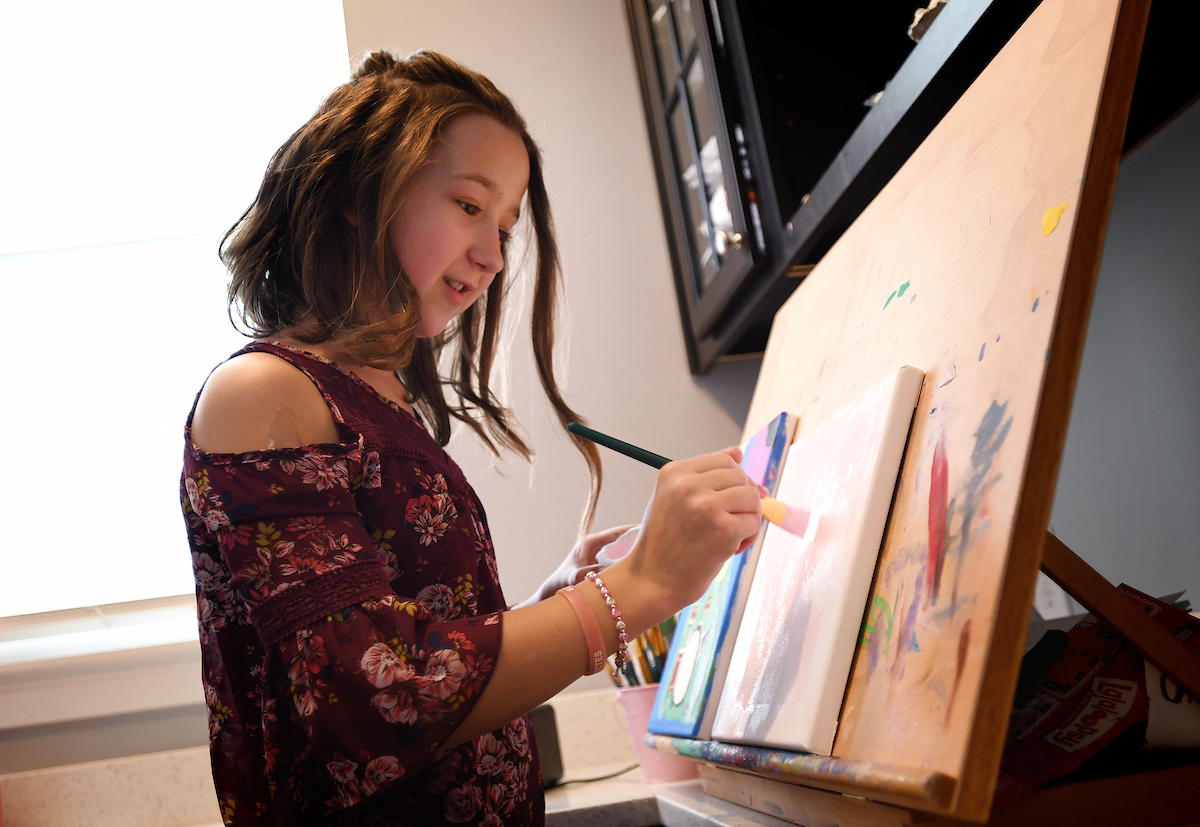 Allison Bowman, 10, is a middle child. She has a 12-year-old brother named Jack and a 4-year-old sister named Madelyn. She’s a budding artist, a dancer and a good student. When she fell during a family hike in Brown County on Oct. 20 last year and pain began radiating down her arm, her parents (and her pediatrician) first thought she had fractured her elbow.

When the pain became unbearable a week later, they went back to the doctor. They tried a different cast, different medication. Nothing worked. They ended up going to an Indianapolis hospital emergency department, where the fifth-grader was given more medication for what was thought to be a muscle spasm.

Meanwhile, Allison was retreating inside herself. She couldn’t stay awake at school because of the medications. Without the medications, the pain was unbearable.

“She didn’t have a life, she was miserable,” her mom said.

Together, they kept searching for answers. Another trip to the orthopedist, followed by an MRI, revealed no fracture. An overnight stay in a local hospital helped to relieve the pain, but it came roaring back within two days. More X-rays, still no answers.

“I was like, I’m done,” Christine Bowman said. “This is not normal. By that time, we’d been doing this for two and a half weeks.”

She called IU Health, explained what was going on, and had an appointment scheduled with Dr. Dormans within two days. He looked at Allison, looked at her records and told her mom, “I think I know what this is.”

With those seven words, a weight was lifted from Christine and Sean and from their little girl.

“You should have seen the change in my daughter,” Christine said, “just that someone believed her.”

Dr. Tolley confirmed the diagnosis of CRPS and set up a treatment plan, which would involve a nerve block, effectively shutting down the nerves in her arm for up to 72 hours, followed by several days of intensive in-patient physical and occupational therapy. Allison was admitted to Riley the Monday after Thanksgiving and released the following Saturday – pain-free.

She’s back in the classroom, she’s dancing, and she’s drawing again – with that right arm that for so many weeks was useless.

“We told ourselves we weren’t going to decorate for Christmas until she came home and she was able to help,” Christine said. “It was just a wonderful gift. And we’re lucky. The thought that this goes on with some children for months or years I cannot even imagine. I’d never heard of CRPS, but as a mom who knows her kid is not a whiner, I knew something wasn’t right. Sometimes you have to push.”

No one knows why some people get CRPS and others don’t, Dr. Tolley said, adding that the pain is primarily due to hypersensitivity of the peripheral and central nervous system.

“It was vital to try and eliminate the pain and immediately engage in comprehensive inpatient physical therapy, occupational therapy and psychological therapy for teaching pain-management skills, keeping in mind that the most important aspect of treatment is the resumption of normal activity,” he said.

From the basketball court to bed 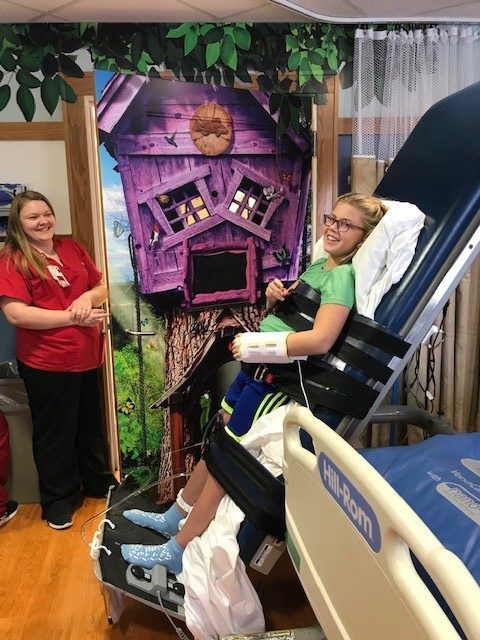 Corinne Kollen, 10, is another success story of Dr. Dormans and Dr. Tolley and all of the therapists who had a hand in her care. The Fort Wayne resident woke up limping one morning shortly after Thanksgiving. She’d had basketball practice the previous night, but suffered no apparent injury. Yet, her left leg hurt from the hip down, her mom said.

They didn’t think too much about it until the pain intensified. Her pediatrician examined her twice and suggested it might be an inflammation of the hip or joint that would resolve itself in a matter of months.

Within two weeks, the fifth-grader could barely walk, relying on crutches to get around. When she came off the bus crying one day, her mom decided to take her to a sports orthopedic doctor in Fort Wayne. As in Allison’s case outlined previously, there were more X-rays and MRIs, more doctor visits. That’s when the family’s pediatrician opted to send Corinne’s file to Riley.

Once again, a meeting with Dr. Dormans provided an answer. Renae Kollen remembers him spending more than an hour with them, then arranging an appointment with Dr. Tolley for the next day. They agreed to return 11 days later for the seven-day treatment – an epidural and intensive in-patient physical and occupational therapy.

“We were not quite prepared for all of that, and he said it’s not a guarantee, but he’s had some success and kids have walked out of the hospital,” Renae said. “That was our goal. We didn’t really have any other options.”

The epidural blocked any pain sensation from the waist down for 72 hours. It was essentially a reboot for her hypersensitive nervous system, Renae said.

Even while Corinne had the epidural in, therapists came in to help her stretch and begin to retrain her muscles, even though she couldn’t stand or move on her own at that point.

“The therapy was so creative, that totally impressed us,” Renae said.

Corinne spent three hours a day in therapy, and her parents saw steady progression every day – from a walker to a cane to not needing anything.

“She walked out of the hospital with a little limp; her gait was a little off, but that was just muscle weakness,” her mom said.

The youngest of their three children jumped back into school and activities, including piano and modified basketball practice, earlier this month.

“We really feel like it was a miracle. It was such a random thing, but our care was phenomenal,” Renae said. “Everybody was so positive and kind. It really meant a lot.”

Christine Bowman echoed those comments. “Every single person we came in contact with was absolutely wonderful.”

Both of these patients did well because they were diagnosed relatively early, Dr. Tolley said.

“The sooner that CRPS is diagnosed and treated, the better that patients do. They also did well because of the multidisciplinary approach to treatment.”

The blocks and medication prescribed by the pain physician are just part of the treatment, he added.

“The therapy provided by the physical therapists, occupational therapists, art and music therapists, pain psychologists and nurses on the inpatient rehabilitation unit under the direction of the rehab physicians is vital to improve the chances at a successful outcome.”

That collaborative approach to care is critical to success rates and to improving overall access to care, Dr. Dormans and Dr. Tolley say.

Particularly for CRPS patients, appropriate treatment can prevent a lifetime of pain and disability.

“CRPS is never really cured but can be in remission for life, or it can recur in the same or a different extremity spontaneously or as the result of an injury or illness,” Dr. Tolley said.

Christine Bowman is just thankful her daughter got the care she needed to get her life back.

“She’s back to her sassy self, drawing and being fashionable,” she said. “It’s so nice to have her back.”