Two babies, one amniotic sac and a whole lot of love

Mono-mono twins: It occurs in just 1% of pregnancies and carries plenty of risks. But that wasn’t the only problem. Here’s the story of two tiny girls born four months early and now under the care of Riley specialists.

Two little girls lie in separate beds in separate rooms in the same hospital. They can’t see each other, but they are together in heart and spirit. Just like they were together when they came out of their mother’s womb last month.

The preemies, Lena and Delaney Drew, are in Riley Hospital for Children’s neonatal intensive care unit, fighting for life after nearly dying before birth.

Lena and Delaney were delivered in Evansville by emergency C-section at 24 weeks and six days. The identical twins were identified as mono-mono twins early in the pregnancy. It’s an anomaly that occurs in just 1% of pregnancies wherein both twins share the same amniotic sac with the same placenta.

In early pregnancy and up to 24 weeks, monoamniotic or monochorionic twins have a survival rate of 50%.

“We knew it was really rare and it’s one of the riskiest pregnancies there is, so we were going to appointments every other week,” said Emma Drew. She and her husband, Eric, have been on a roller coaster of emotions since they found out they were pregnant.

“We knew that there was a high chance that one or both wouldn’t make it even before birth. And then after birth, with them coming so early, it’s tough,” Emma said. 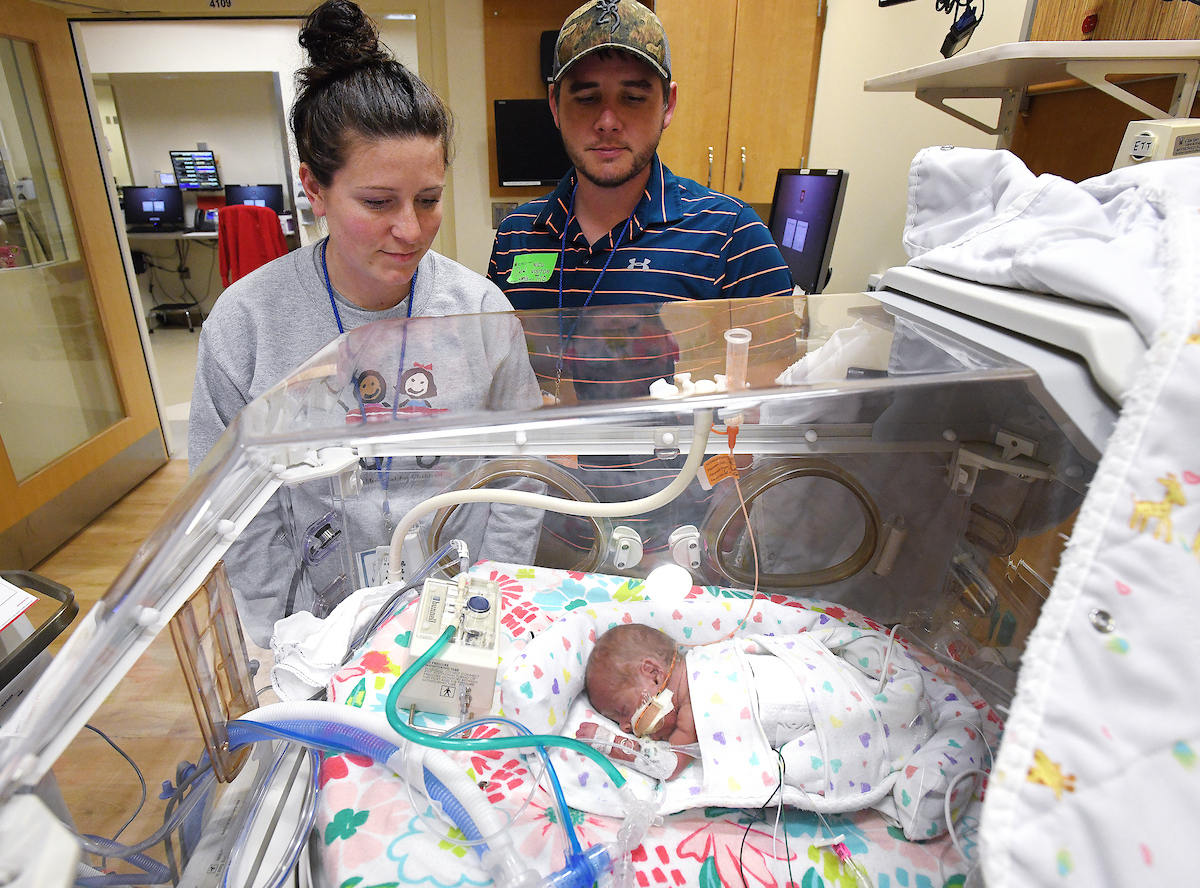 The couple found out in June that their babies also were diagnosed with twin to twin transfusion syndrome, meaning one twin – in this case Lena – was in effect stealing blood and nutrients from her sister, putting Delaney at risk. Left untreated, the survival rate for TTTS twins is 10-15%.

Doctors told Emma this news at a June 7 appointment, after which they decided to admit her for more tests and observation. Preparations were being made for Emma to be transferred to Cincinnati Children’s for treatment of TTTS, but that plan fell apart when tests later that day revealed that the twins’ umbilical cords were knotted together, choking off blood and nutrients to both babies.

Now it was a race to save the babies’ lives.

Almost before Emma knew what was happening, she was being wheeled into the operating room for an emergency delivery, many weeks before she expected to give birth.

“I had sent everyone home that night, thinking everything was fine,” she said.

Now, she steeled herself for the worst.

Ironically, that same day that she had gone in for what she thought would be a routine appointment, her husband was released from the same hospital after back surgery. He was home asleep that June night, unaware that his wife’s appointment had escalated into an emergency.

He heard the news when his grandmother showed up on his front porch at 1:30 in the morning, rousing him out of his post-surgery fog.

When Eric arrived back at the hospital, he went first to his wife’s room, and together they went to the NICU, where they got their first glimpse of the fragile babies. Delaney weighed 1½ pounds, and Lena weighed 1 pound, 9 ounces. 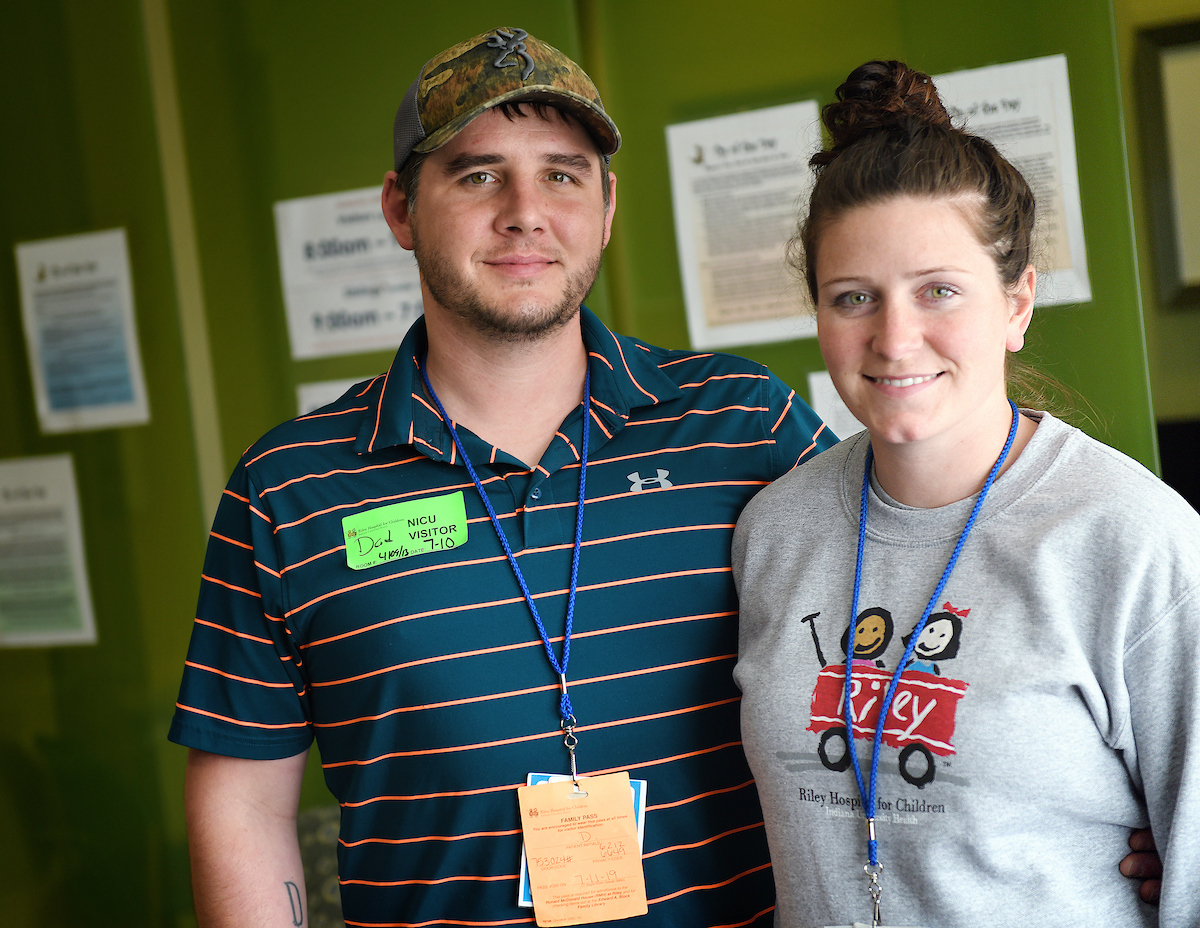 Despite her bigger size, Lena was in worse shape than her sister. Doctors prepared them for the possibility of losing her. Within a week, Lena had been flown up to Riley for treatment of a perforated bowel. Emma followed her to Indianapolis, while Eric stayed in Evansville with Delaney.

For two weeks, they dealt with each twin’s medical crises separated by the 170-plus miles between them. After Delaney suffered a pulmonary hemorrhage, she joined her sister at Riley at the end of June.

Dr. David Boyle, neonatologist and co-medical director for Riley Maternity & Newborn Health, as well as medical director of the Riley Fetal Center, worked with staff in Evansville to get Delaney moved to Indianapolis.

“Our colleagues in Evansville were terrific. It was so important that we got both babies to Indianapolis so the family could be together,” he said, describing the challenges the parents faced dealing with emergencies involving both children.

Emma agreed. “This is the place to be; they’re wonderful here.”

Now, mom and dad and their girls are at least in the same city, even though it’s still two hours from their home in Petersburg, Indiana, which happens to be the same town where Riley heart transplant patient River Harbin and his family live.

They’ve been staying at the Ronald McDonald House, which has been a lifesaver, they say, and have adjusted to the routine of days spent in the hospital, alternating between each twin’s room.

“We’re constantly walking back and forth peeking at them; we can’t leave them alone,” Emma said.

“But every time you hear one of those beeps, you think it’s your kid,” her husband added.

In their time at Riley, the girls were treated for PDA (patent ductus arteriosus), a congenital heart defect common in premature babies in which a vessel connecting the pulmonary artery to the descending aorta fails to close.

What once required open-heart surgery now can be repaired using a device in the cardiac cath lab, a relatively new procedure being done at Riley.

In the days just after the girls were born, life was overwhelming, Eric said. But a solid support system of friends, family and faith has eased the burden.

“We’re doing good now, but there were a lot of emotional times before this,” he said. “They (the twins) went through some really scary situations.”

The couple draw on each other for strength and try to escape the hospital walls occasionally just to get a break from the noise and the stress.

The girls are now six weeks old, and each has gained more than a pound, so even though they’re still tiny, they’re nearly twice as big as they were at birth. 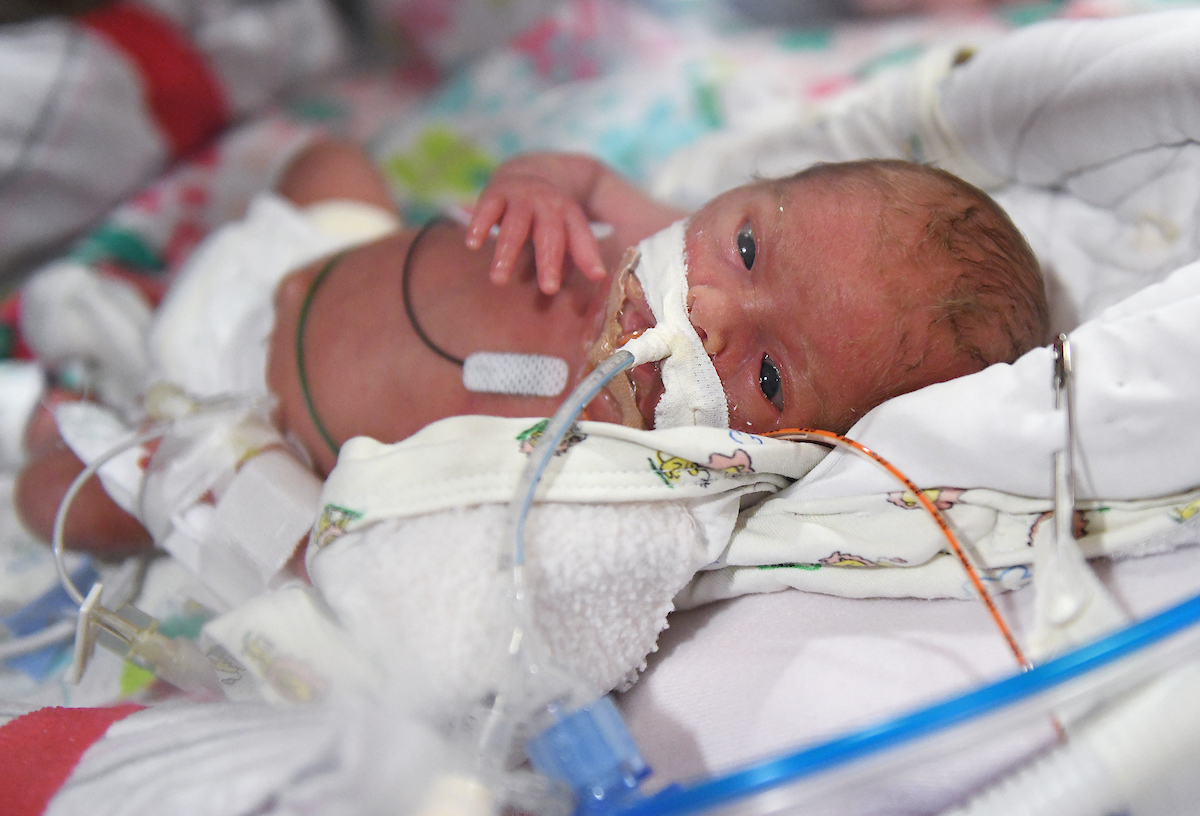 Lena, who has already undergone two bowel surgeries, is the calm one for now, her parents said. Delaney is feistier and quick to notice when someone walks in her room. “I’m curious to see if it continues when they get older,” Emma said

“I think they play games with us,” Eric said, suggesting they take turns needing attention.

As Emma reaches in to put the tiniest diaper (no bigger than a cellphone) on Delaney, she talks softly to her daughter, reassuring her that everything is OK.

Both mom and dad have been able to hold their babies – the skin-to-skin contact is important for the preemies’ development, nurses say. And it does wonders for the parents’ hearts as well.

The babies have a long road ahead of them to recover from complications of prematurity, but they’re in the right place, said Dr. Boyle, a father of premature quadruplets himself. His quads were born 29 years ago, and all are doing well today.

Doctors have told the couple to expect the babies to be hospitalized until about their original due date – Sept. 21.

Until then, they’ll keep vigil by their daughters’ bedsides and dream about the day they can go home.