A year after she lost her foot in a lawnmower accident, Italia McAllister is running full steam ahead on a prosthetic leg. She’s a cheerleader, a dancer and a budding actress, with a smile that won’t quit.

Six-year-old Italia McAllister and her little brother, Rydyn, are chasing each other around the hospital courtyard. Around and around they run, laughing under the hot sun.

That Italia can walk, much less run, is a testament to her spirit, her parents’ steadfast love and the skill of her healthcare team at Riley Hospital for Children at IU Health. Because this little girl was in bad shape a year ago.

Italia was hospitalized at Riley for more than a month after her left foot was caught in a riding mower and amputated May 8, 2018. It happened in the blink of an eye when a relative accidentally struck the child, who was running toward the house she and her family were visiting that day.

When Robyn McAllister thinks back to the day her daughter’s life changed forever, she shudders still. Robyn and her husband, Cody, are sitting together on this hot Friday watching their youngest two children run and play. 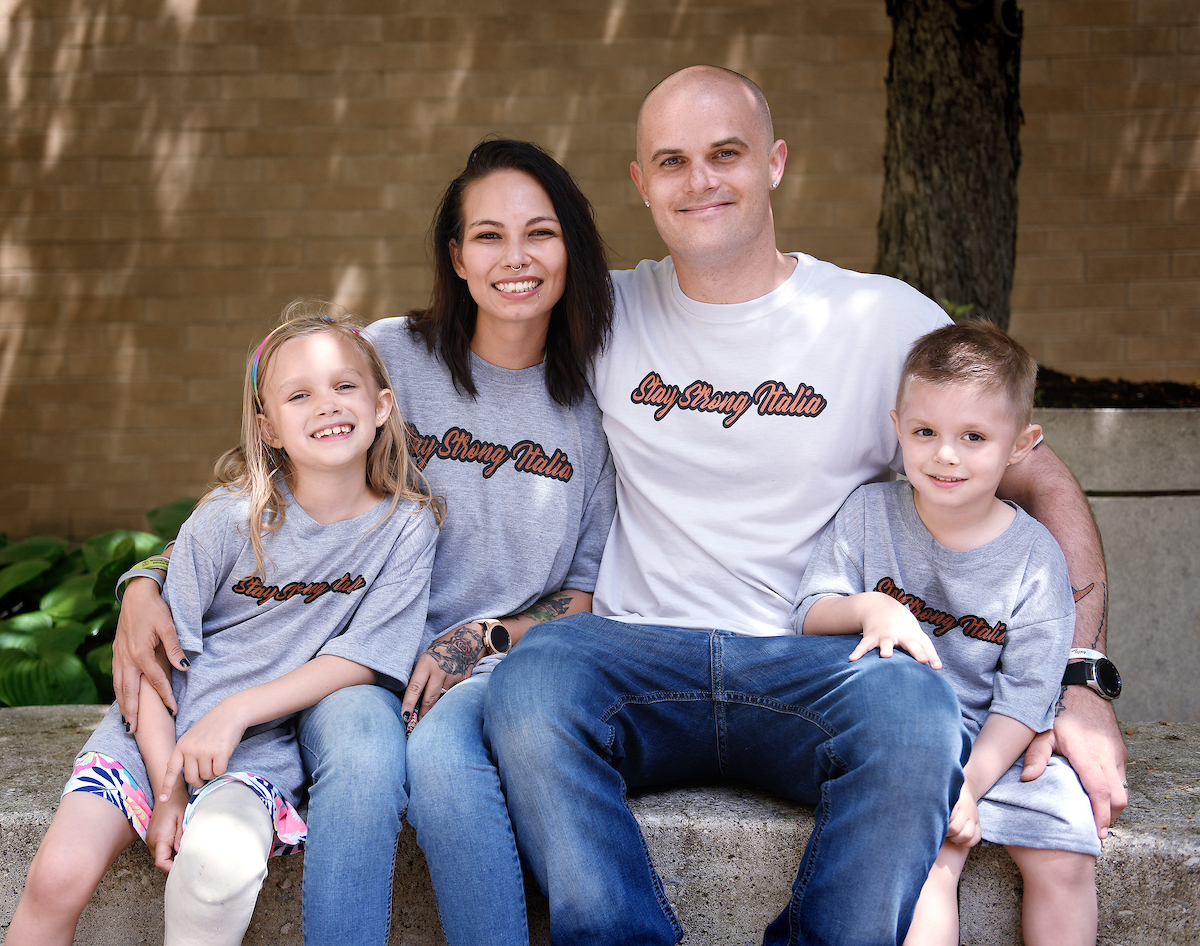 As she begins to talk about the accident, Robyn’s voice shakes and Italia comes over to stand in front of her. “Try not to cry, mommy,” she says. Then she stares into Robyn’s eyes while she talks: “I’m seeing if there are tears.”

“We’re good, her mom tells her.” Satisfied, Italia runs off to play.

A YEAR OF PAIN AND PROMISE

They are good now. After a year of trauma, pain, rehabilitation and new beginnings, the McAllisters are looking forward, not back. They are taking their cues from Italia, who has enough spirit to carry both of her parents on the hard days.

This is a good day. Italia has adapted well to her second prosthetic leg, which is adorned with butterflies. In fact, she calls her prosthetic leg “butterfly.” When it’s off, she dubs her shortened limb “lost leg.”

But it doesn’t slow her down. She’s a cheerleader, a dancer and a budding actress – she recently appeared in a production of “Sleeping Beauty” – as a flower. No doubt the brightest flower on stage.

Italia has always had a bright personality, her mom says, but it’s gotten more pronounced since the accident. Why? “Because she had to learn how to adapt” Robyn says. “It just makes her shine more.”

As she finishes first grade, Italia is looking forward to a summer of fun, starting with Disney World. It will be the family’s first visit to the Florida theme park. Even though she walks well with the prosthesis, her mom and dad know this trip will be a real test of her endurance.

They also plan to go camping and visit a water park. These were trips that had to be put off last summer, when Cody and Robyn wondered what lay ahead for their little girl.

HE PICKED HER UP AND HER FOOT WAS MISSING

Cody reached Italia first after the accident. He hear a loud snap – it sounded like a gunshot – and a scream. When he saw his daughter crumpled in the grass, he tried to stand her up. That’s when he saw that her foot was missing.

“I scooped her up, ran to the door and sat her down in the grass.” Italia was in shock. Fortunately, Cody’s dad, an emergency medical technician, was nearby. He wrapped up her leg and staunched the bleeding before the ambulance arrived.

The hospital in Elkhart, where the couple lived at the time, had her airlifted to Riley. Robyn was able to fly with her daughter, while Cody followed behind in a car driven by a family member.

“As soon as we got to Riley, they swooped in and took her to surgery, Robyn said. “They saved her life.”

In the days just after the accident, as they reeled from the severity of Italia’s injury, Cody and Robyn couldn’t imagine this day – when their daughter would run, jump and play again. 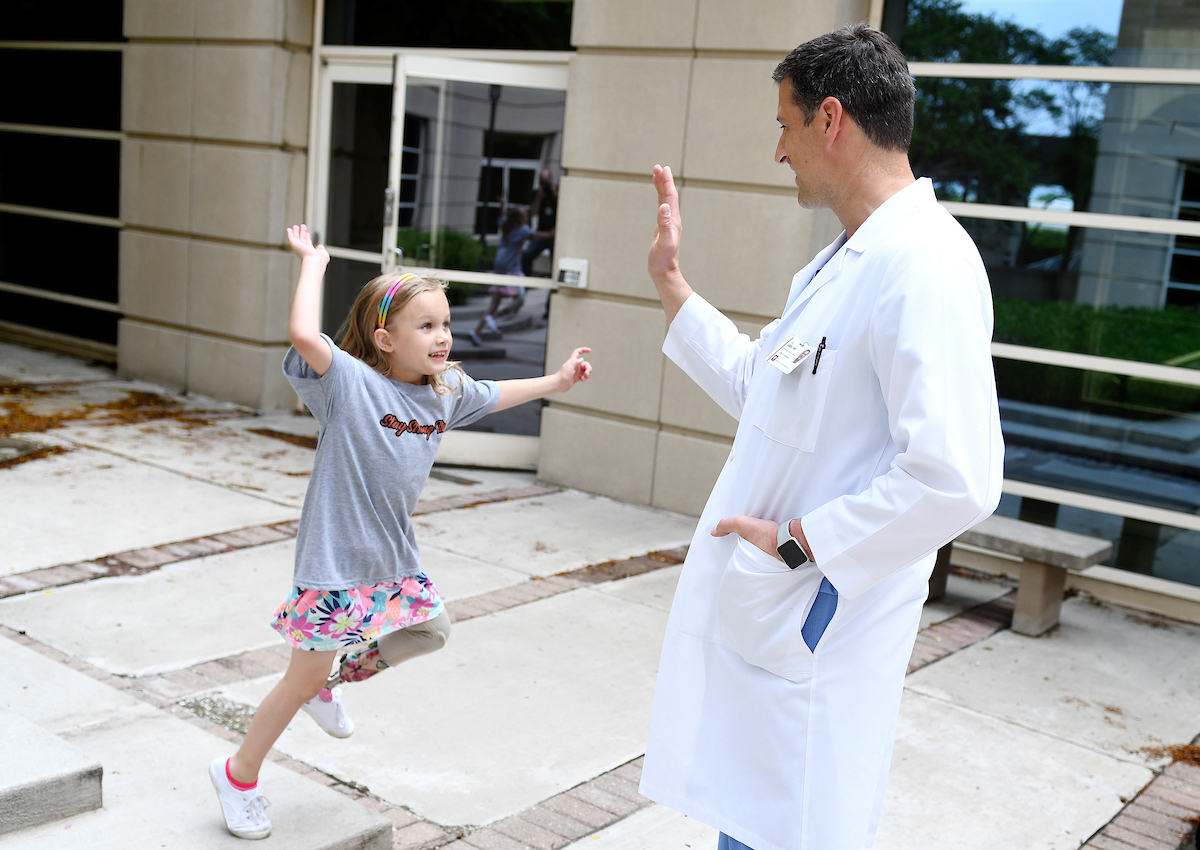 “She’s very spunky,” Robyn said. “I have not found her off button yet. She definitely keeps us on our toes.”

And that’s just fine for Cody, who says her smile and her sass help get him through the day.

Dr. Greg Gaski, Italia’s orthopedic surgeon, expected her to be in the hospital up to two months, but Italia had other ideas. She progressed rapidly, going home a month after the accident.

He stopped by to visit with the family last week when they were at the hospital for a follow-up. When Italia saw him, she ran over to give him a high five, a grin spreading across her face.

“She’s doing amazing, best we could have hoped for,” Dr. Gaski said as he watched her run off after her brother. “She healed well, and she has an incredible attitude.”

The family has made it their mission to advocate for lawnmower safety since the accident. They have a Facebook page: Stay Strong Italia/Lawnmower Accident Awareness for people to follow her progress. They are selling shirts to raise money for a Riley wagon with Italia’s name on it.

“We started this fundraiser for Riley to give back because they did so much,” Robyn said. 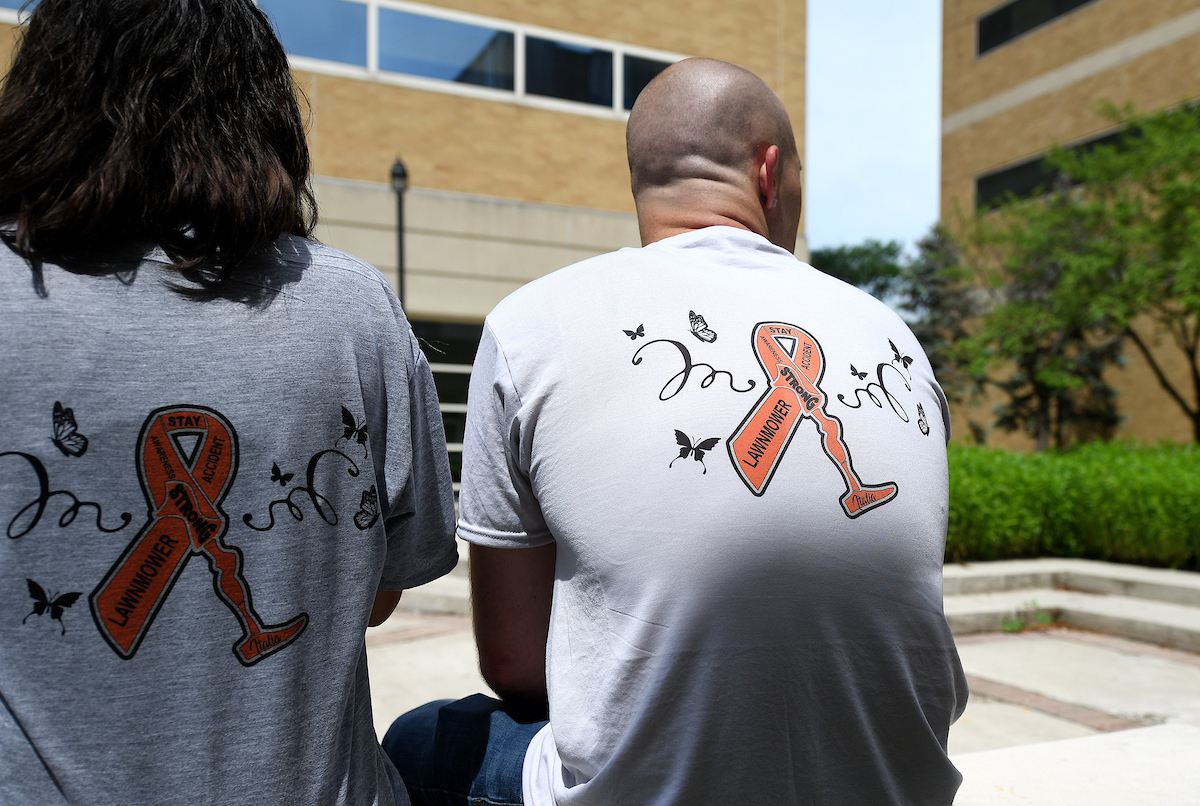 If they don’t raise enough for a wagon ($2,500), “we just want to get lots of toys for Riley for all the kids,” she said. “That was a big thing when we were there – seeing the kids laugh. It got you through the worst. Hearing other people’s stories in the hospital opened your eyes.”

Robyn, who had stepped away from her daughter’s side for a just moment when the accident occurred, has found her voice in the year since.

“You do not want to have to deal with this,” she said, tears springing to her eyes. “A year out, I’m still thinking about it. I see so many kids riding with adults on lawnmowers, and it just sucks the air out of you; your heart just sinks,” she said. “You know what can happen.”

Dr. Gaski emphasizes that children should never ride on lawnmowers and he recommends adults avoid wearing headphones while mowing “because you might not hear that plea for help.”

Each year, 800 children in the U.S. are run over by riding mowers or small tractors, and more than 600 of those incidents result in amputation.

The McAllisters would rather not be among those statistics, but at least now they want to prevent others from the pain they have endured.

That means keeping kids inside when the lawn is being mowed, no joy rides for kids and improving mower safety, Robyn said. 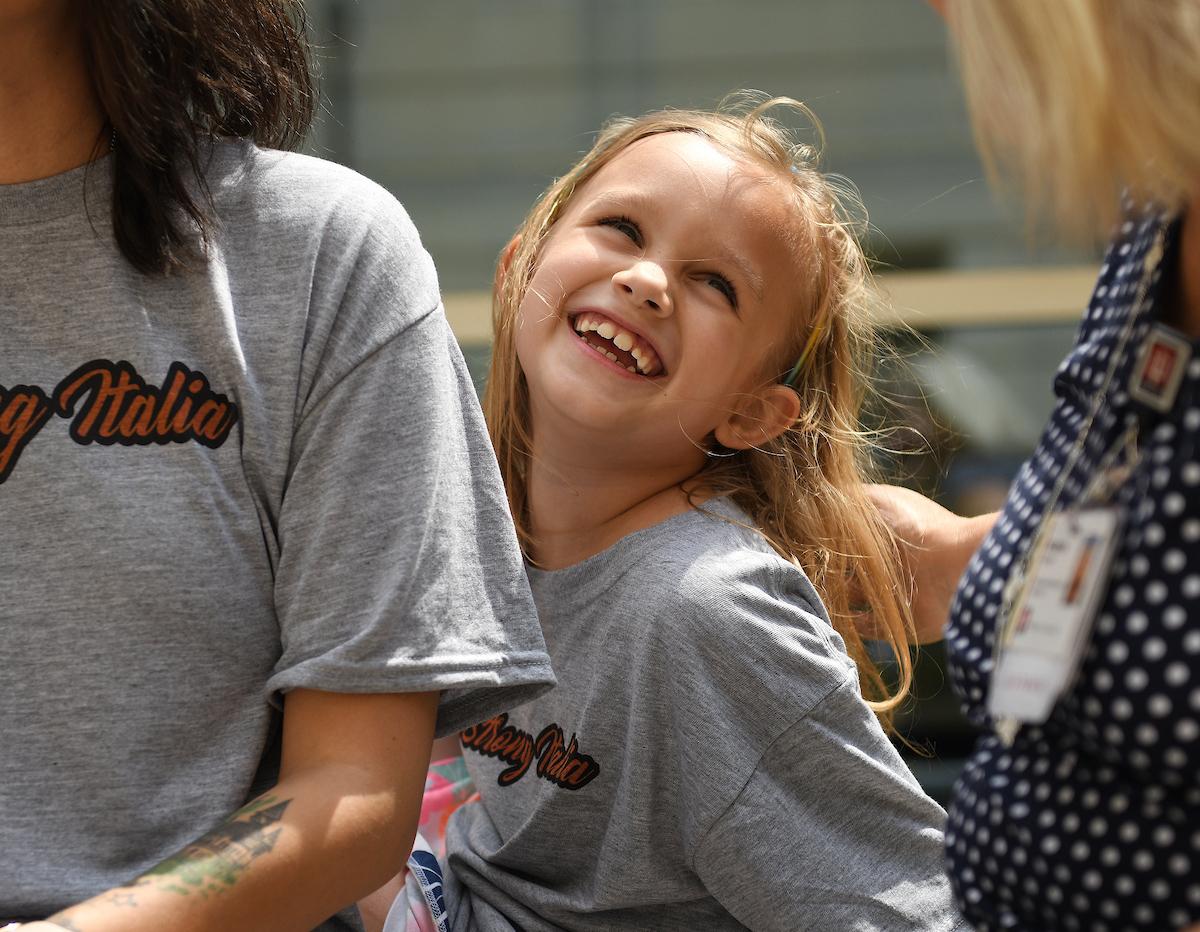 She tries not to be a helicopter mom today, but her eyes follow her children while she talks to a visitor. When Italia shows off the splits for Dr. Gaski, he calls her “our little acrobat.”

Next up is learning to ride a bike. “We started learning before the accident, but that’s something we want to conquer this summer,” Robyn said.

It will all come in time, Dr. Gaski said. She will get replacement legs more frequently as she grows, but she’ll be a candidate for a high-functioning prosthesis that will allow her to run.

“We are optimistic that she is going to continue to improve,” he said. “She’s a trouper.”

As for Italia’s future, Robyn is not worried. The accident has prepared her for handling adversity.

“She’s going to do very well, with her attitude. I see her being something special. Maybe she’ll work for Riley to help kids. I would love that.”