Matthew Landman grew up in rural Iowa with a cornfield as his playground. He and his brother spent summer days building forts in that field, much to the farmer’s chagrin. The two boys bicycled all over the small town (population 1,800) and went fishing – a lot.

Their dad was the town’s middle school science and math teacher, and their mom worked at a travel agency.

It was a good childhood, he recalls, but when it was time for him to make his way in the world, he had places to go.

Now in his fifth year as a trauma surgeon at Riley Hospital for Children, Dr. Landman came to Riley from Children’s Hospital Colorado. Before that, he spent 11 years in Nashville, Tenn., for medical school and residency at Vanderbilt University.

Why become a doctor?

He was 8 when he had an emergency appendectomy while on vacation with his family in Wisconsin. He didn’t realize it then, but the experience would shape his future.

“As a kid, you have pretty simplistic thinking,” he said. “You go into the hospital feeling bad, this person comes in and makes it better, and you leave feeling great. It was pretty profound, and it (a medical career) just made sense as I went through high school and college.” 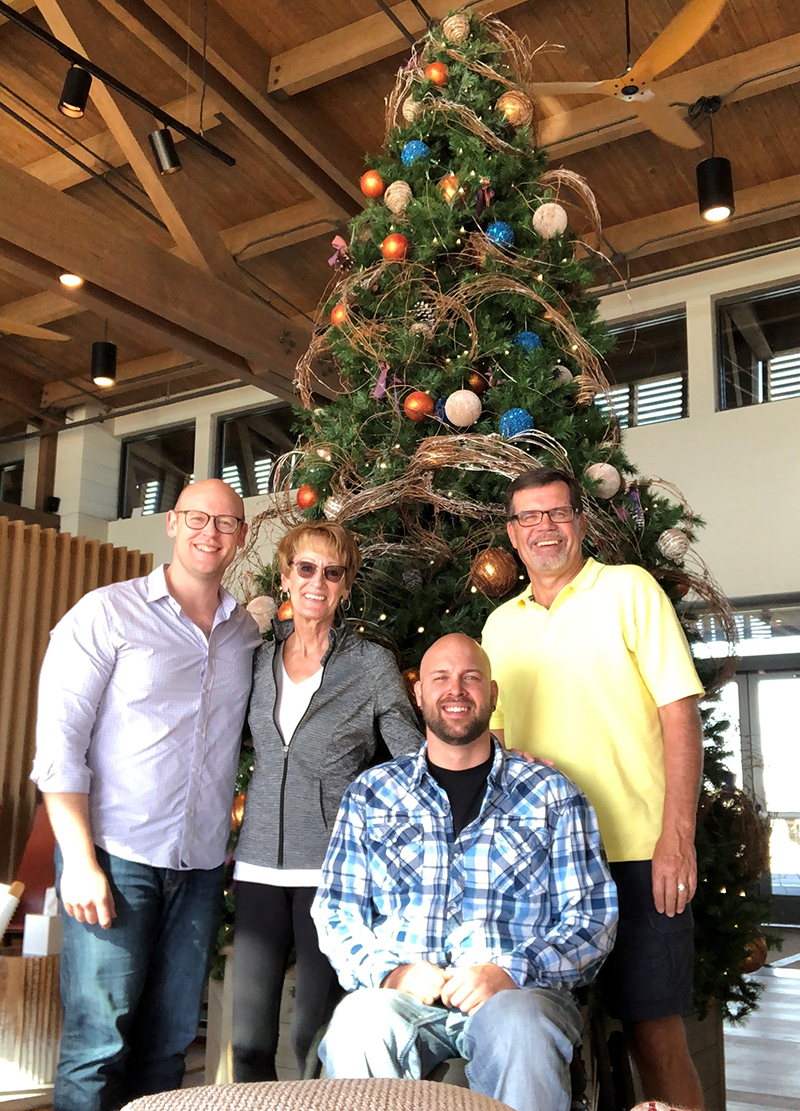 A second incident hit close to home, though by then Dr. Landman was well on his way to getting his medical degree. His brother suffered a traumatic injury in a car accident.

It didn’t change Dr. Landman’s career trajectory, but it did reinforce certain lessons.

“It certainly colored how I understand trauma and understand patients,” he said. “I’ve never looked at a waiting room the same.”

Dr. Landman says he was drawn to trauma surgery because of his drive to help kids. While education and prevention are key to reducing childhood trauma, kids are still going to get hurt.

“Obviously, we’d love it if kids never got into accidents or had any issues, but I really have a heart for just making sure they can get through these injuries, that we have the wherewithal to treat patients correctly.”

That compassion was evident in his treatment of 13-year-old Connor Guthrie, who suffered a devastating tear to his esophagus where it connects to his stomach in a car accident one year ago. He and IU Health University Hospital Dr. Ken Kesler performed a complex reconstruction rarely used on a child that involved turning the stomach into a tube and bringing it up to connect it to the repaired esophagus.

“One of the nice things about practicing here at Riley is we have all these incredible specialists here at a moment’s notice,” Dr. Landman said about Connor’s case. “I certainly did not do all of this myself. It was a huge team of people – ICU, OR, anesthesia, rehab – everyone played a huge role in this. He was cared for by a lot of folks.”

Seeing the boy doing so well a year later represents one of the best parts of his job.

“Seeing someone come from near death to living a productive life again, that’s an incredible honor to be a part of.”

For the trauma surgeon, the worst kinds of injuries he treats are related to child abuse and gun violence. Neither needs to happen.

“Kids playing with loaded guns that aren’t locked up, homicide, suicide and just accidental stray bullets – those sorts of things are tough. We’ve seen many cases of deaths from gun violence that were preventable.”

When it comes to child abuse, he relies on a team of professionals to help manage the cases.

“We have an incredibly gifted group of emergency department physicians and child abuse pediatricians who do great work alongside our trauma surgeons in terms of advocating for the patient, often assisting law enforcement as they build a case against the perpetrator,” he said.

“Knowing that there are people out there working for justice is helpful. We can’t be in every home to prevent it, but hopefully we can do something to either save a life or work to make sure that life was not taken without justice.”

Child abuse injuries and deaths are horrific, Dr. Landman said. “It’s tough because the public doesn’t understand the magnitude of the issue.”

A report produced by the Children’s Bureau of the U.S. Department of Health and Human Services said Indiana had a reported 29,198 child abuse cases in 2017, representing 18.6 victims per 1,000 children, double the national average.

Dr. Roberta Hibbard, division chief of the Child Protection Program for Riley, said in April that while the national report is a call to action, “we have to be cautious in interpreting data in comparison to other states because reporting laws and requirements vary from state to state.”

Dr. Landman acknowledged that working in trauma can sap the spirit. But, he said, “I don’t care for patients in a vacuum. I consider my eight partners an integral part of my own mental health, as do they. Same with the rest of our trauma team. We rely heavily on each other to work through these things.”

One of the efforts he is proud to support is a trauma survivors program, which is being formed at Riley, designed to help to identify post-traumatic stress in patients and parents.

“We come to work every day and we’re surrounded by injuries and illness and surgeries, and I think it’s good for us as physicians to remind ourselves that this is not normal,” he said.

For the families caught in the middle, the experience is likely one of the worst times of their life, so understanding how to help beyond stitches and surgeries is key.

“Families can be devastated from this. If we can do anything to make it better for them, it’s an awesome opportunity.”

Despite the intensity of many of the cases he and his partners see, Dr. Landman is quick to point out that it’s not all heavy. “There are days when we repair hernias or write papers,” he said with a laugh. 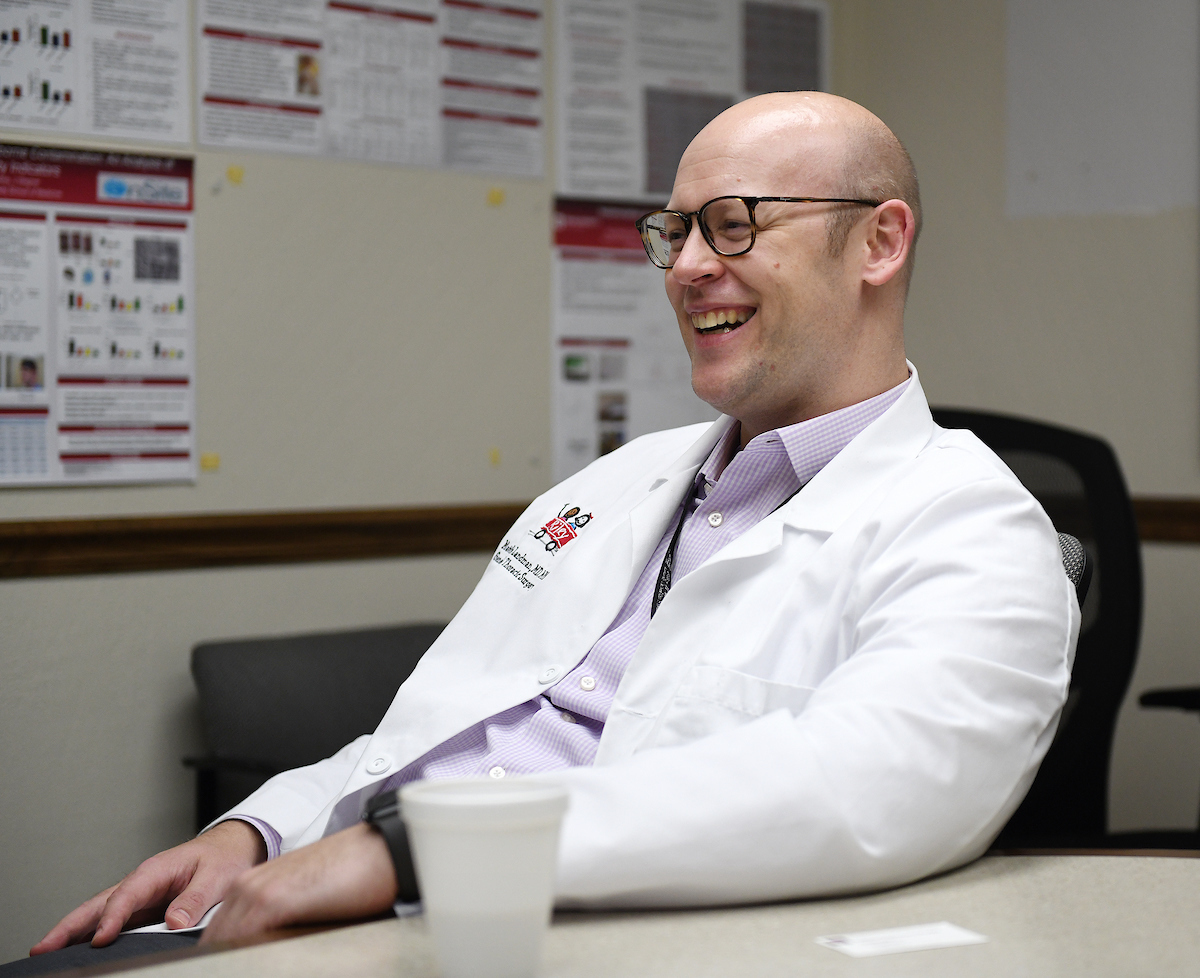 Dr. Landman, who lives in Downtown Indy, said he doesn’t have much time for fun, but he enjoys traveling, reading, working out, watching movies and taking naps. He celebrated his 40th birthday recently in Fiji. He doesn’t think much about age, saying “Some days I feel 60, other days I feel 20.”

He hasn’t forgotten his Iowa roots. His parents still live in Iowa, but now they travel the country pulling a fifth-wheel camper. “I don’t know what possessed them to do that,” he laughed. “I tell people they’re homeless.”

Next month, he and his brother will visit them in Alabama, where they are spending the winter. “They love it down there.”

During his time at Riley, he said it has been his privilege to take care of “some incredibly strong and brave kids.”

“We see the bravery of the kids that we get the opportunity to take care of every day, and it’s hard not to be inspired to keep moving forward.”