Eleven-year-old Elliot is headed home after 37 days in the hospital, where he received bone marrow from a cousin to cure sickle cell disease. “Sickle cell sucks,” Elliot’s mom says of the blood disorder that can cause unrelenting pain, severe infections and organ damage.

It’s day 37 and Elliot Preddie is over the whole hospital experience. He’s ready to bust out, go home and jump on the trampoline with his little brother.

Lucky for him, day 37 is also going-home day.

Elliot, 11, is recovering from a bone marrow transplant to treat – and hopefully cure – his sickle cell disease, an inherited disorder that causes red blood cells to break down, resulting in serious infections, chronic pain and organ damage.

It’s a hideous disease that strikes people of African descent the hardest, along with Hispanic-Americans from Central and South America, and people of Middle Eastern, Asian, Indian and Mediterranean descent. September is National Sickle Cell Awareness Month. 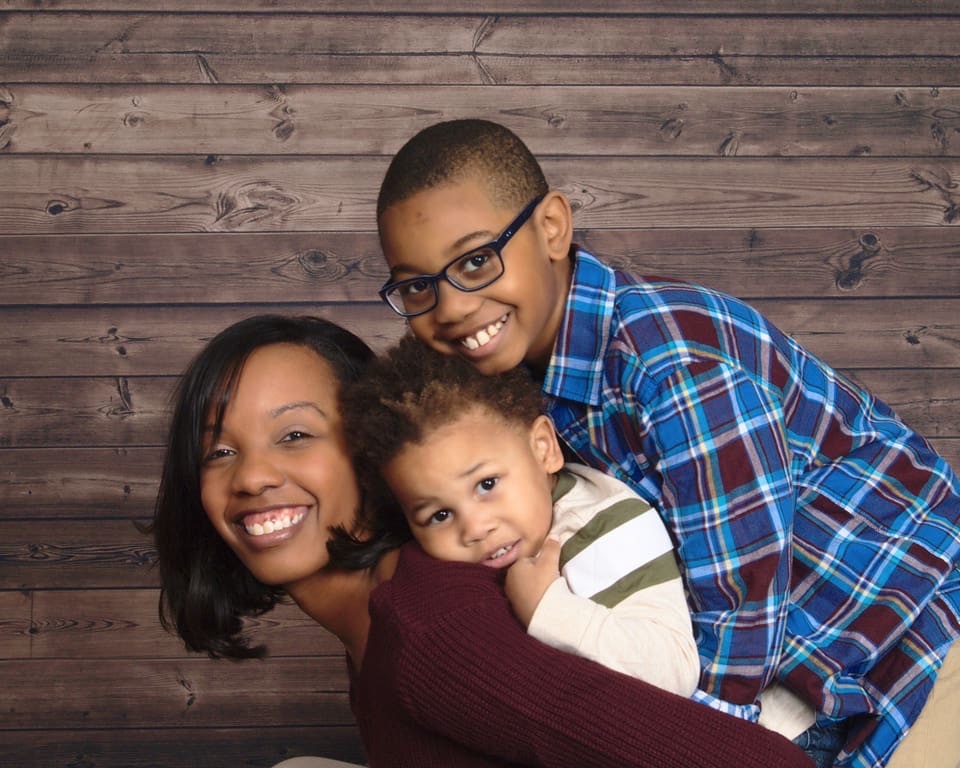 Elliot and his brother, Carter, 3, both were diagnosed with the disease at birth. Their parents, Terrence and Tremesha Preddie, moved the family to Indianapolis from Columbus a few years ago to be closer to Riley Hospital for Children, where their boys are treated.

Tremesha is blunt when she talks about the disease that has stolen part of her boys’ youth and innocence, yet manifests itself in different ways. For her youngest, that means pain in the upper body and an enlarged spleen. For Elliot, it started with “silent strokes” when he was a toddler, which led to monthly blood transfusions for five years.

“Sickle cell sucks,” she said, apologizing for her language but not for the force behind her words.

“All of these complications are horrible, and every kid has it manifesting in a different way. So do you trade neurological surgery for someone like Elliot versus a kid down the hall whose body is riddled with pain 24 hours a day? How do you pick which one’s better? It’s all horrible.” 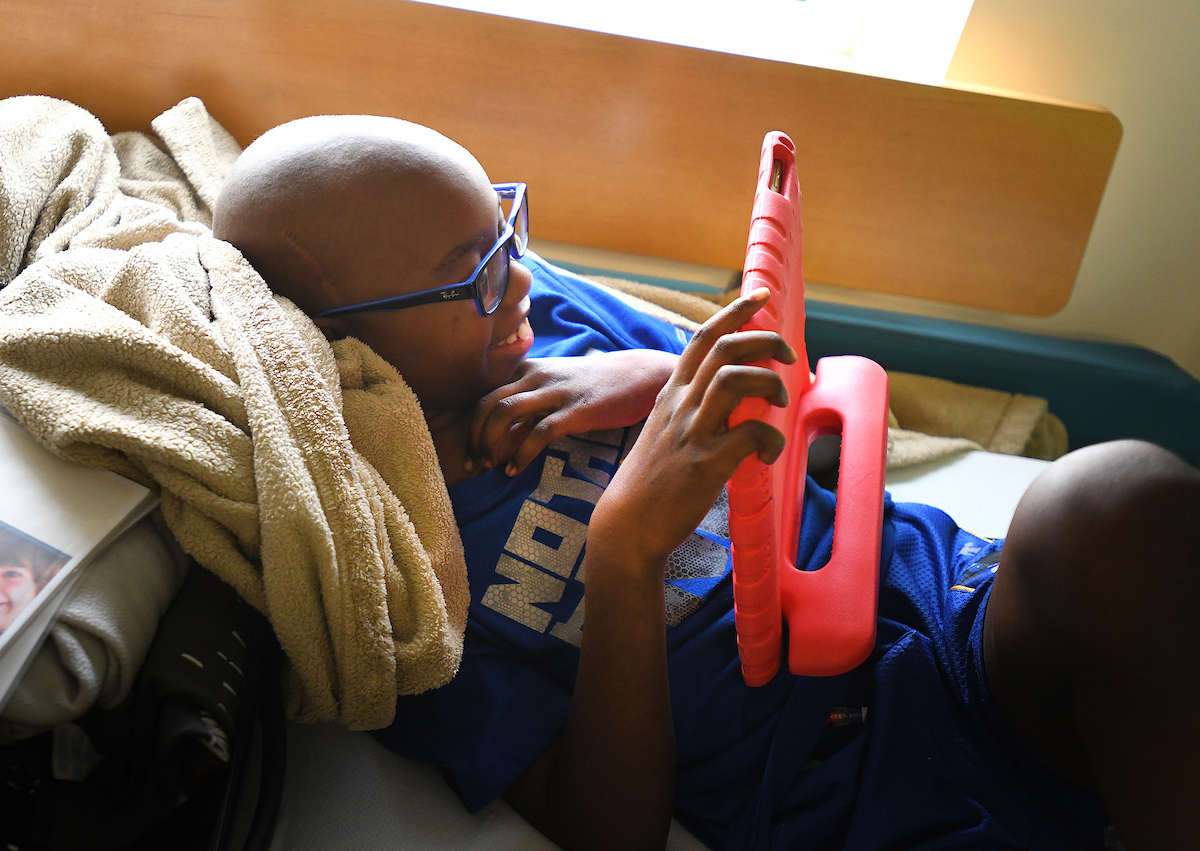 As she talks in Elliot’s hospital room, her son is bouncing from bed to bed, first watching a video on a tablet, then climbing into a plastic tub “to practice bathing,” he said. His mom rolls her eyes before telling him to leave the tub behind.

“It’s not playtime all the time,” she said.

The sixth-grader is wearing a basketball shirt but says he hates the sport. He loves football, however, especially the Detroit Lions. Sickle cell has kept him from playing football, so he’s been taking taekwondo lessons and has advanced to a blue belt.

A scar in his skull reveals where he had surgery for a condition called Moyamoya, a rare cerebrovascular disorder caused by blocked arteries at the base of the brain, which put Elliot at high risk for stroke despite regular blood transfusions. It was, his mom said, “a ticking time bomb.”

It’s been a rough 37 days for Tremesha, who has spent many a night on a cot in her son’s room.

“I pray a lot over there on that bed,” she said. “I read Scripture a lot. I have prayed over this kid in his sleep more times than he is aware of.”

TRANSPLANT CAN BE A CURE 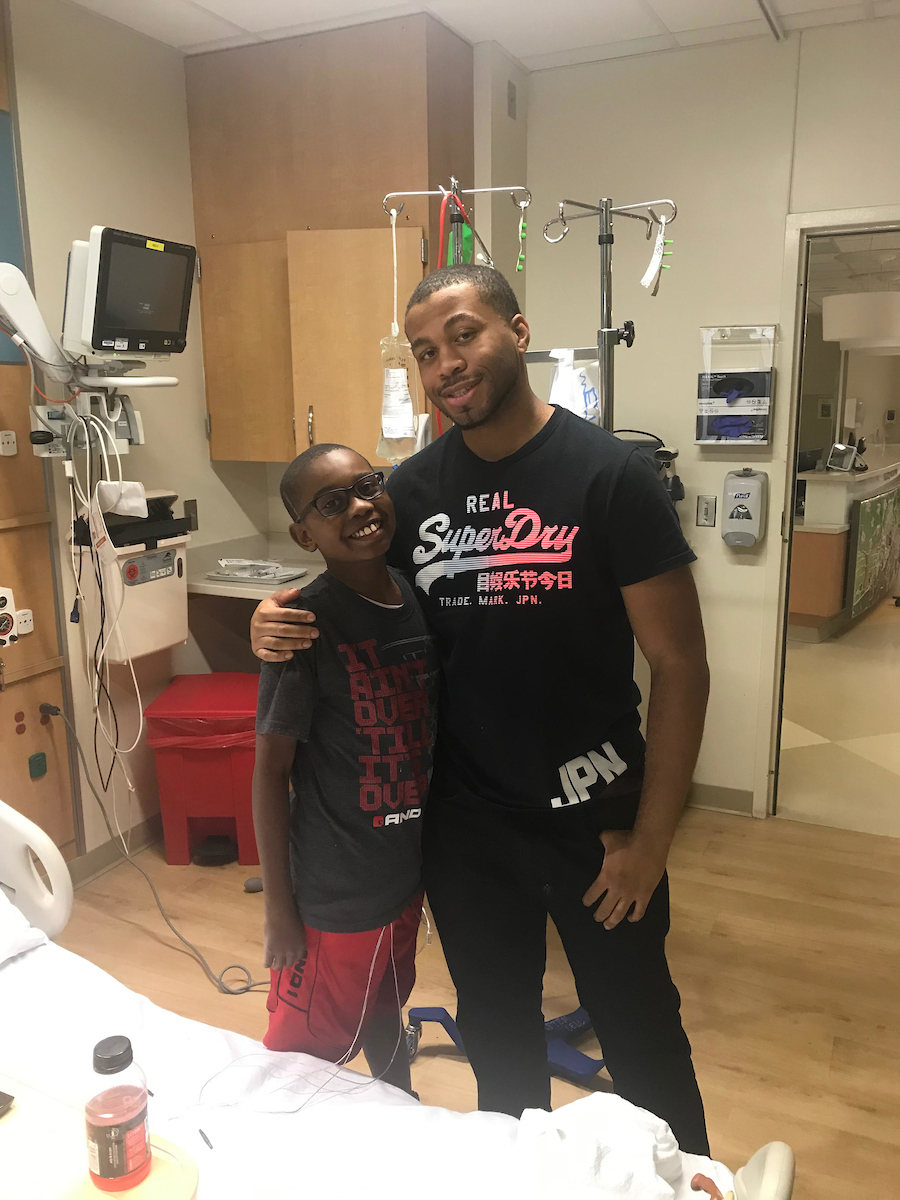 And the results have been good, she said. In the past few years, transplants done for sickle cell at Riley have all been successful, though patients are still being monitored for long-term success.

Gene therapy is being tested nationally in adult patients with sickle cell, but it has not been trialed in pediatric patients yet, she said. 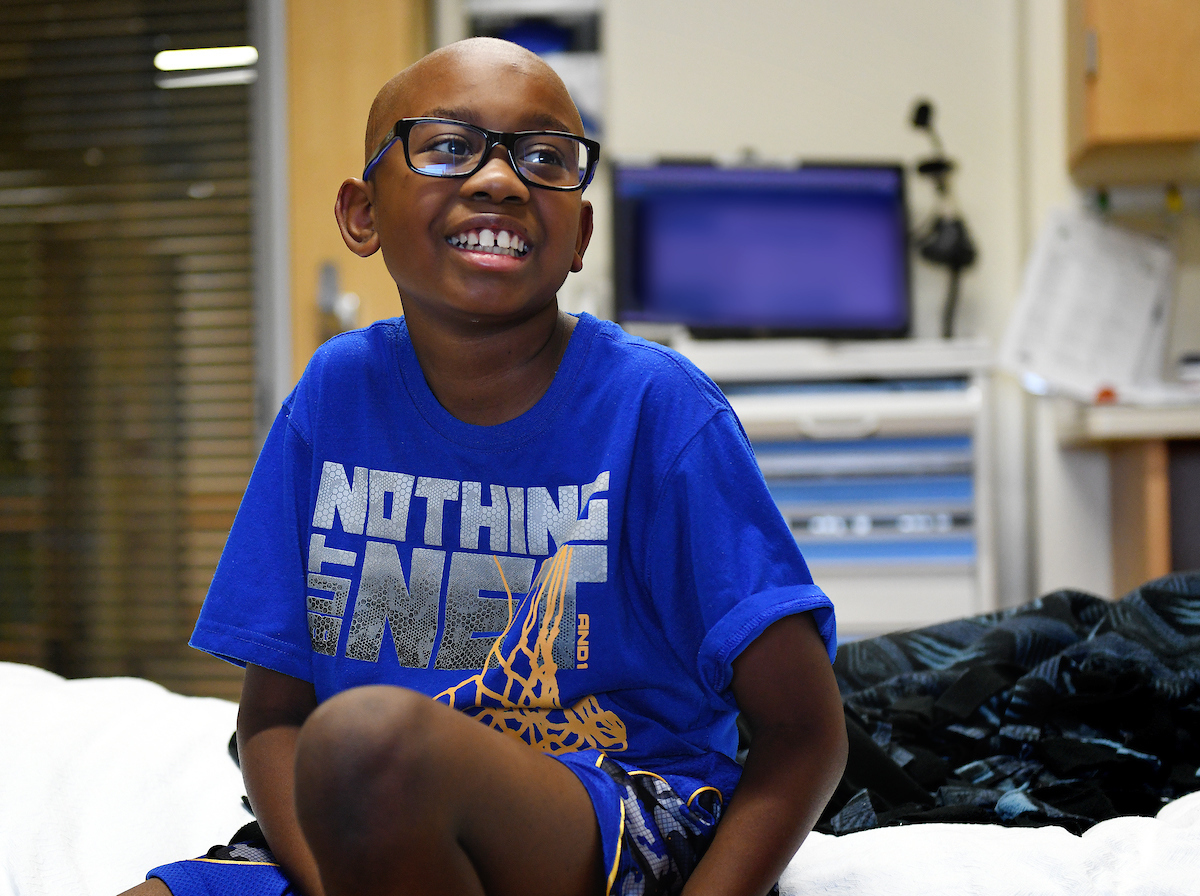 “The goal is that this will cure him of his sickle cell,” Dr. Jacob said. “It’s hard for us to grasp – for our families who have gone through this and their child is cured – the incredible sense of weight taken off their shoulders, like they can take a deep breath. Sickle cell is a chronic disease, but it’s still a disease that the life expectancy is in the mid-40s. You can imagine that’s hard for a parent to even think that their child won’t live a full and happy life.”

As is the case with cancer patients, the best donor is often a matched sibling, but in families with one child suffering from sickle cell, it’s not uncommon for other children to also have the disease.

New research at Riley and IU Health University Hospital focuses on the benefits of using a half-match donor, which is what Elliot’s family did. Elliot’s donor was an adult male cousin.

Using half-match donors opens the door for sickle cell patients, who may not have a large pool of potential donors available in the National Bone Marrow Registry.

Sickle cell predominantly affects African Americans or other minority groups, and the number of individuals in those groups who are on the registry is much smaller, Dr. Jacob said. Minority groups are simply less likely to be donors, either due to lack of awareness or mistrust of medicine. So the ability to find an unrelated donor match becomes even more difficult. The same is true for cancer patients who are from minority groups. 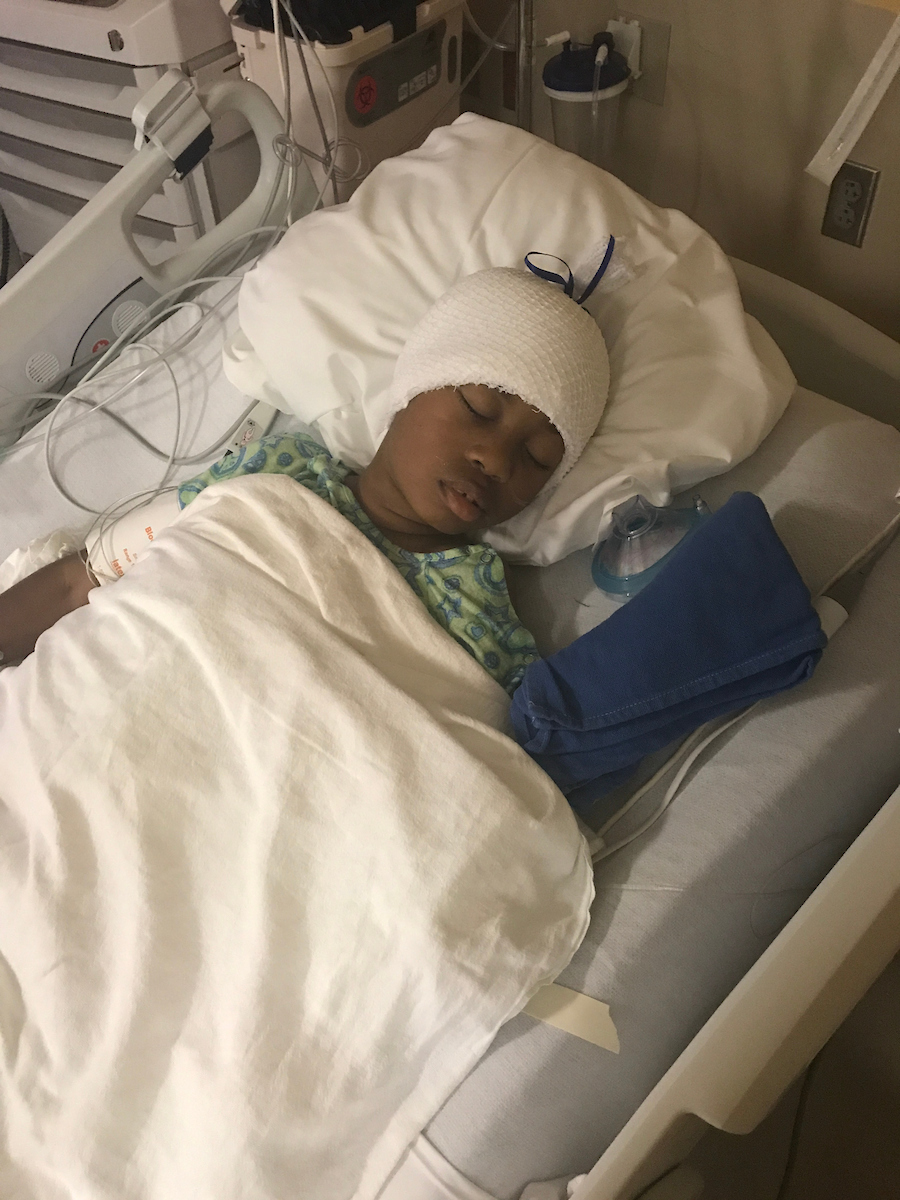 As she begins to pack up Elliot’s room for the trip home, Tremesha talks about the long journey her family has been on.

“It’s really hard, I’m not gonna lie,” she said. “It’s really tough, especially when both of them go down at the same time. The day Elliot was admitted for his stem cell transplant my youngest had a fever, so I had to leave Elliot with the very capable nurses here and go downstairs to the ER to be with my 3-year-old. Then come back up here and clean myself from head to toe so I didn’t bring anything to him because he was on chemo so he was losing his bone marrow and his white blood cells,” she said.

“It’s physically hard, it’s financially hard, and then they’re your kids. So the emotional toll … there are no words. But you do what you have to do when it’s your kids.”

And for the Preddies, being at Riley is what they have to do.

“I absolutely love this hospital. I count my blessings all the time that Riley’s here and that I’m not like some parents who have to come from really far away and then have to leave their kids here,” she said.

When she looks at her smiling, playful son, she says simply, “This day has been a long time coming.”

Elliot did well through the transplant process, and his blood counts are recovering, Dr. Jacob said. They won’t know for sure how successful it is until the end of the first year. Ultimately, the risk remains up until five years out, so the transplant team will continue to follow Elliot during that time.

“We know the power of healing. We’ve seen God’s hand too much in our lives to ever try to deny it or stop believing.”