Tiniest patients look up to this woman every day

Child life specialist is a one-woman show at IU Health Methodist, but she has an army of volunteers and a large team behind her at Riley

Karen Hufford spends her days at IU Health Methodist Hospital cuddling the tiniest of babies – many born preterm, others recovering from addiction passed on from their mothers.

She rocks them, hums to them, holds their little hands and comforts them when they cry.

It’s all in a day’s work for any mother, but Hufford’s own children are grown. These are her work babies. And they get every bit as much love. 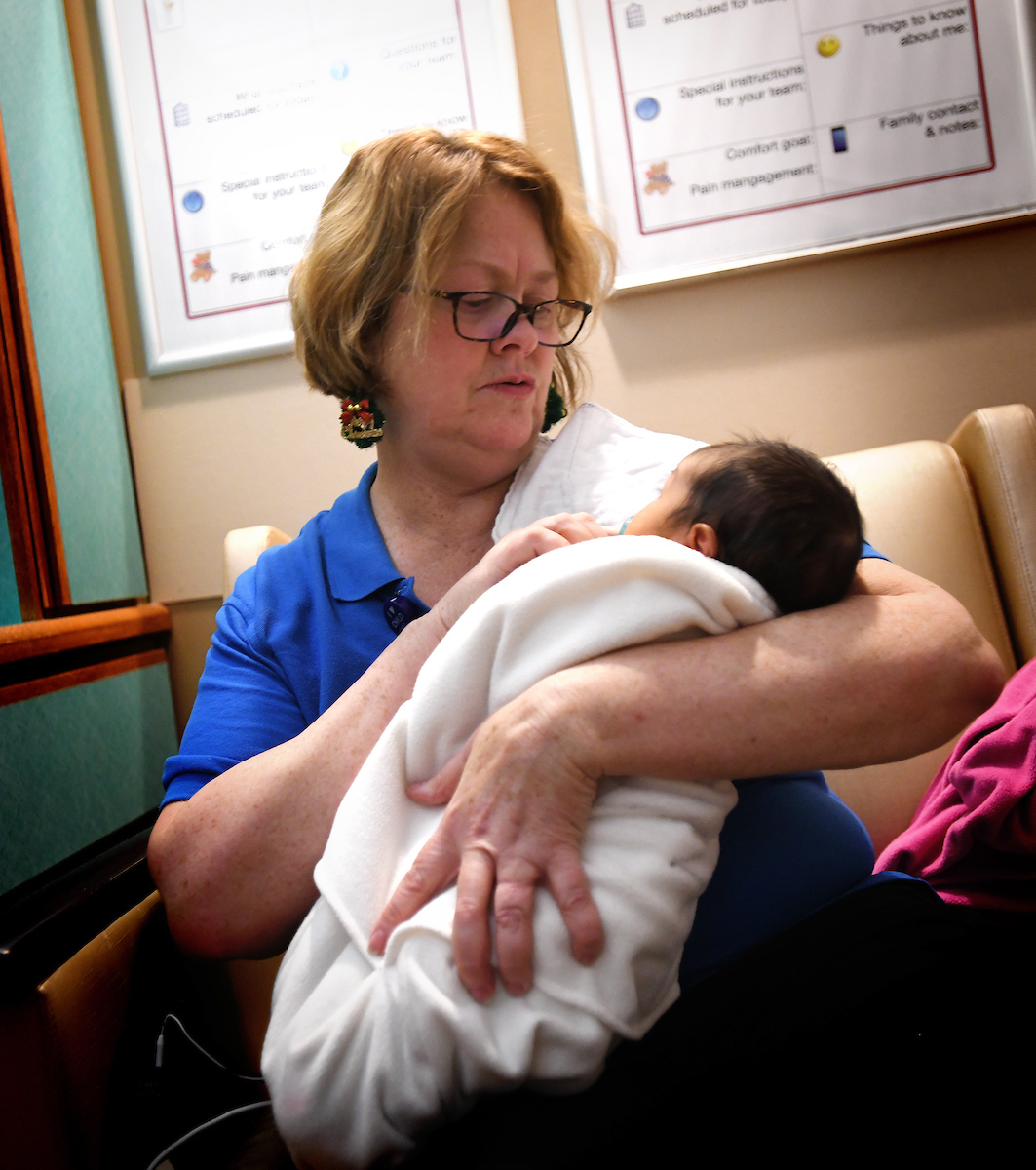 As the only child life specialist at Methodist, working in the hospital’s NICU, Hufford visits with dozens of babies every week. She’s part of the child life team at Riley Hospital for Children, but she’s a one-woman department with an army of volunteers at Methodist.

The hospital’s PICU moved over to Riley a few years ago, and eventually, all of the NICU will be housed there as well, once the new mother-baby unit opens. But for now, Hufford makes her rounds on the third and eighth floors at Methodist.

She works closely with the nursing staff to see which babies might need more attention on a given day.

“I couldn’t do my job without the great nurses that we have on the unit,” she said.

Her first stop of the day is to see a sleeping Charlotte Temple, born at 29 weeks and weighing just over 3 pounds. After a few weeks in the NICU, Charlotte is getting bigger and stronger. She’s now 4.5 pounds, thanks to a feeding tube that ensures she gets the nutrients she needs throughout the day.

If a parent is not around, Hufford likes to hold the babies while they are eating, even if it is through the feeding tube, because it helps their development.

“We want the feeding to be pleasurable so it will help them down the road,” Hufford said.

That means holding them when possible, making eye contact, even talking quietly to them. She offers a pacifier to encourage babies to learn to suck and swallow and to associate the sucking action with the feeling of fullness in their stomachs.

Hufford does all of that with Charlotte, even though her feeding has just ended. She carefully lifts the baby out of her crib, careful to tuck in the various wires so alarms don’t go off. She gently loosens the blanket swaddling the baby so she can let Charlotte’s tiny hand clutch her fingers.

And then she hums. The vibration helps both stimulate and soothe the baby.

“I hum all the time, I’m just that kind of person,” Hufford said. She laughs when she thinks about how long it took to figure out “that I belong in the NICU, where I can hum all day and people don’t care.”

Hufford might hold a baby for 20 minutes or longer, depending on the infant’s needs and the child life specialist’s schedule.

But she can’t always be there.

The eighth floor, where Charlotte sleeps and eats, is considered a progressive care unit, where a dozen little ones are cared for in private rooms. Down on the third floor, 32 high-risk babies are lined up in incubators in an open unit.

Charlotte’s mother, Jamie, comes into her room on the eighth floor as Hufford is holding her baby. With two older sons at home, she can’t be with her daughter round-the-clock, but she spends most of the day with Charlotte while her boys are in school.

As she and Hufford trade places in the rocking chair, Jamie smiles and whispers to her daughter: “Hi, how’s mommy’s girl? Did you have a good night?”

It’s that kind of interaction between mother and child that Hufford hopes for all of the NICU babies.

And she counts on her volunteer “cuddlers” to do the same. “I’m passionate about my volunteers.” They are able to be there when she or the parents cannot be.

One of those women, Tracy Helgason, arrives for her shift as Hufford is bragging on them.

“I can hardly wait to come,” Helgason said. “It’s the highlight of my week. I have four kids of my own, but I look forward to holding these babies.”

Hufford has been a child life specialist for nearly 35 years, the past seven with IU Health.

Working with infants obviously requires a different skill set than working with older children. Hufford said as the babies become more alert, she will sing more expressively to them and introduce small toys like rattles and books, even read to them. Language development is critical, as is physical development, she said. As they get a bit older, she has a play mat where they can have “tummy time.”

Not only does she care for the babies at Methodist, she puts together play kits and sometimes crafts for their siblings at home too. For Charlotte’s big brothers, Hufford promised Jamie she would have a bag of toys and a medical play kit for her to take home to them.

Strengthening that bond between baby and siblings at home is even more important now that flu restrictions mean older children aren’t allowed to visit the NICU.

If all goes well, Charlotte will be home with her family near the end of January, which was her original due date.

Hufford looks in on another baby who is about to go home. Sukhraj Singh has only been in the NICU for 10 days, but his feeding tube has been removed, and he is well enough to join his two older sisters at home.

Hufford makes sure to send home two play kits for the girls, ages 3 and 4, which includes dolls and bottles so that when their baby brother is eating, they can sit nearby and “feed” their doll babies.

She’s able to get these toys and supplies from her own mini version of the Riley Cheer Guild toy room, this one at Methodist.

“I am a lucky staff person because I have two teams. One is my NICU team with nurses and staff at Methodist, and the other is the large child life staff at Riley,” Hufford said. “Since I am still part of that department and worked with the staff before I moved to Methodist, I still have great connections and support from that group.”