IU Health midwives deliver on their promise to care for women and babies in a way that respects the personal choices and concerns of each new mom.

Someday, Adalena Kerstein will learn the story of how she was born during a pandemic. But for now, the 6-week-old infant is more focused on baby stuff, like eating and sleeping. 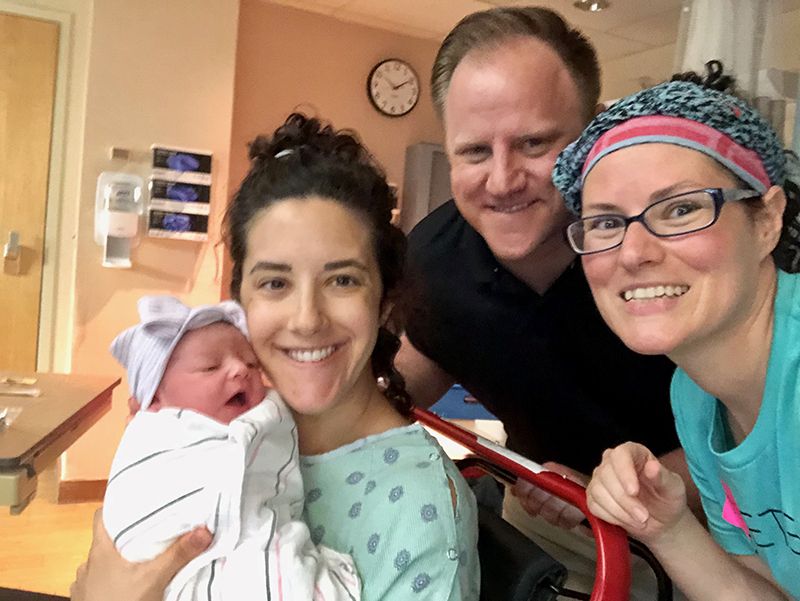 Her parents, Tim and Mary, are over the moon for their first child, named for Mary’s great-grandmother. The 7-pound 9-ounce baby they call Lena arrived right on schedule at IU Health Methodist Hospital, delivered by a member of IU Health’s new midwifery team.

Not that it was easy by any means, Mary Kerstein said. But it was made easier by the care team she had in place at Methodist, including her midwife, doula and nurse, along with her husband.

Mary’s labor began at about 4 a.m. May 29, and Lena arrived at 7 that evening. The first-time mom, who was determined to forgo drugs, benefited from the birthing tub available in labor and delivery rooms at Methodist.

She wasn’t prepared to have a water birth, but the tub helped her to relax and her labor to progress until it was time to start pushing.

“Enjoy is not the right word, but I definitely thought highly of my experience,” Mary said with a laugh as her newborn began to fuss in the background. “I loved Methodist, I loved the nurses, the midwives and everyone. They did a great job.” 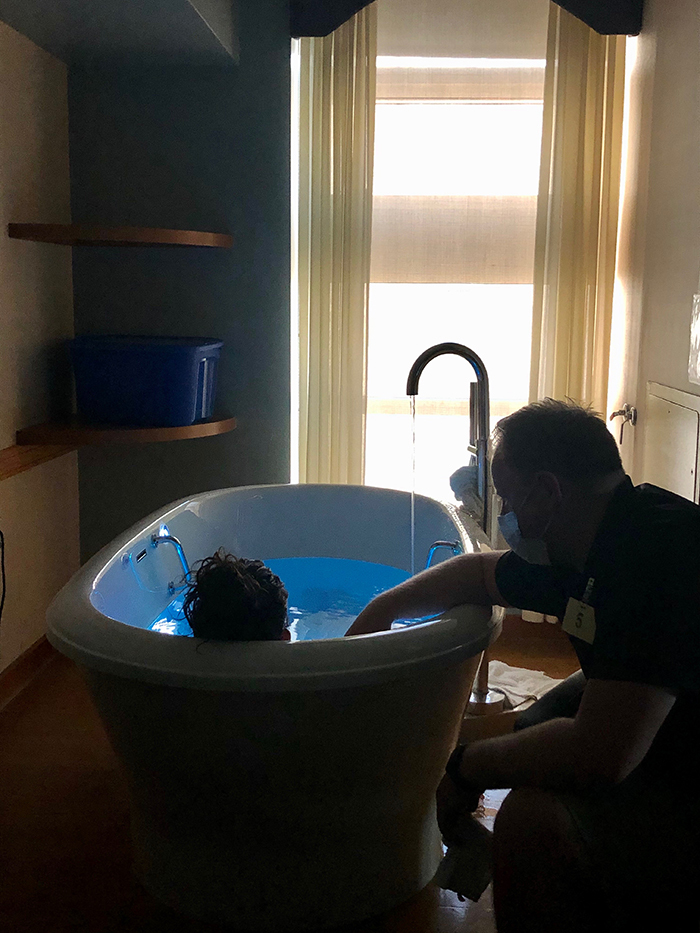 The Brownsburg woman hadn’t actually planned to have a midwife for her daughter’s birth, but COVID and other concerns led her to reach out to Darla Berry, an advanced practice midwife and manager of Nurse Midwifery Services for IU Health, late in the pregnancy.

“I had questions, and I wasn’t getting the answers I needed,” she said. “I made the change last-minute, but I felt more comfortable with Darla.”

She could text Berry with questions anytime, and even though another member of the IU Health midwifery team ended up “catching” Mary’s baby, she was thrilled with the personal attention she received.

“Our midwife was in there almost the entire time,” she said. “I don’t remember her leaving at all.”

That individual attention reassured her during a fearful time. “I probably had more anxiety with this being my first child and COVID on top of it.”

Through it all, she said, “I felt listened to.”

FROM TERRE HAUTE TO INDY 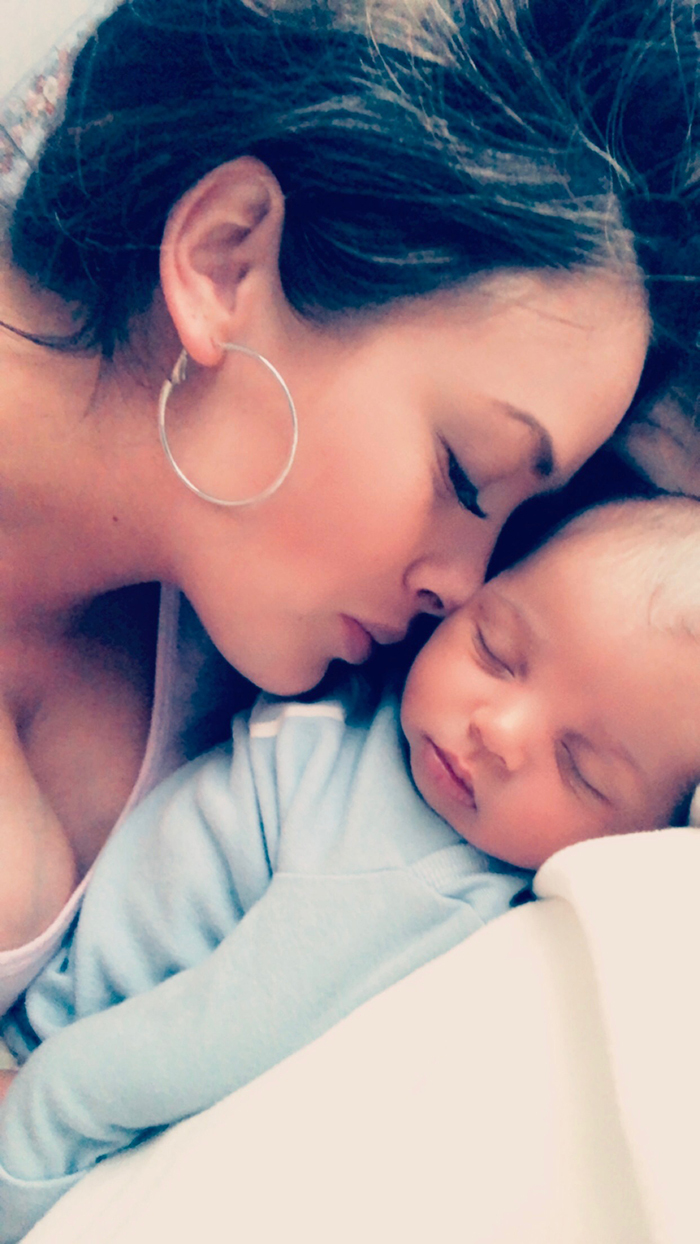 Caitlin Cooper of Terre Haute also didn’t plan to have a midwife attend her second child’s birth. Her older son was delivered by an obstetrician, and she assumed she would go the same route with the second, but then she met Berry at a health facility in Putnam County last year.

When she found out Berry was leaving to launch IU Health’s midwifery program, she told her, “I would follow you wherever you go.”

Cooper drove from Terre Haute to Indianapolis for appointments, although when COVID hit, she and Berry scaled back her in-person visits unless she had specific concerns, instead relying more on virtual visits until closer to her due date.

Her son, Zahir, was a big boy at birth, weighing 9 pounds 10 ounces. Her labor lasted 22 hours.

“It was a struggle to get him out,” Cooper said, but she was thankful for Berry’s steady hand and that of the Methodist labor and delivery nurses, particularly Maddie Gawrys-Strand, as well as the support of Zahir’s father, Yousif Abdul-Raheem.

“I got there at 9 in the morning and didn’t have him until 7 the next morning, and she (Berry) was there the whole time,” Cooper said. “She was wonderful. If I had to do it over again, I would pick her a million more times.”

The World Health Organization has declared 2020 the Year of the Nurse and Midwife, Berry said, because it understands globally “what we don’t get nationally – that midwives are crucial to health.”

A midwife for 20 years, she helped bring many babies into the world at Methodist when she worked for another healthcare organization, but she has long thought that IU Health and its female patients would benefit from a midwifery practice. The stars aligned and the practice launched in January of this year.

Berry and her three colleagues will continue to deliver babies at Methodist, which has established itself as a leader in midwifery care, she said. Eventually, labor and delivery will move to the new mother-baby unit under construction at Riley Hospital for Children at IU Health.

IU Health has significant advantages over other local programs with regard to midwifery care, Berry said.

“We are offering water births, we accept women attempting to deliver vaginally after having had cesareans, our nurses have more experience with midwives than any other system in the city, and we have the most in-depth collaborative practice team anywhere.”

Quinn Moncada is nothing but grateful to IU Health certified midwife JoAnn Fluent-Peistrup, who jumped in to help deliver Moncada’s first child at Methodist after Moncada’s labor stalled at an Indianapolis birthing center.

After laboring for 24 hours, the Bloomington woman was transferred to Methodist when it appeared the baby might be in distress. Moncada had done her research before becoming pregnant and knew that a natural birth with the support of a midwife was what she wanted. She also knew that the longer her labor continued without results, a C-section would become more likely.

“I was aware there was a midwife at Methodist, and thankfully we were matched,” Moncada said. “JoAnn was phenomenal. As a midwife, she viewed birth as a natural event even though we were in a hospital setting. Once we got to the hospital, I was like, let’s do this. I agreed to an epidural to relax my body and let it get the rest it needed, and it worked out.” 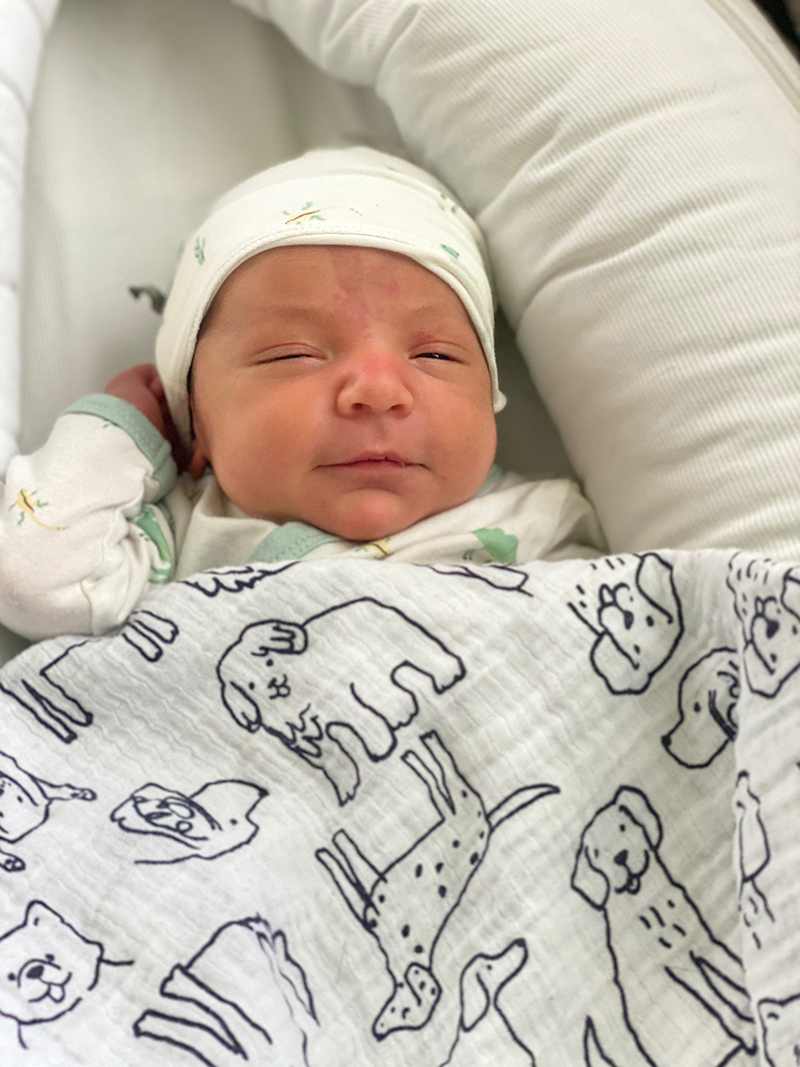 Moncada delivered 7-pound 1-ounce Elias Moncada about 13 hours after arriving at Methodist. Throughout her labor, Moncada said Fluent-Peistrup radiated calm, allowing her to change positions, which helped things progress, and reassuring her that she would have the vaginal delivery she wanted.

“She really trusted the baby to tell us if everything was going well and was just very confident that he was going to be birthed vaginally.”

The nurses were “phenomenal” as well, Moncada said. “They were so helpful and stayed with me basically the entire time, moving me every few minutes, talking to me, helping both of us feel calm.”

The Riley at Methodist NICU team was on hand for the birth as a precaution, but Elias didn’t end up requiring any extra care.

“Everyone made sure that it felt as natural and calm as possible,” Moncada said. “I just really trusted that everything was going to be OK.”

Despite her plans going awry in the late stages of labor, she and her husband, Jose, are thankful for the midwife team at Methodist.

“Truly, without them I would not have had a vaginal birth, and I would feel really differently about my birth experience,” she said. “We’re just so grateful.”

Find out more about the IU Health midwifery program here.

Photos submitted and by Rachel Vanoven