Thousands of people are Cheering for Charlie

Their 19-month-old baby is fighting neuroblastoma, but this Franklin couple finds comfort and peace in their faith, family and friends.

Their baby is battling an aggressive form of cancer, but Cody and Stephanie Smith are counting their blessings.

This is how they choose to face a frightening diagnosis, with all of its twists and turns, tears and joy every step of the way.

The Smiths are thankful for all kinds of family – the grandparents who help carry the load at home; their church family, who wrap them in love and prayer; and their work families, who have given them one of the greatest gifts during this ordeal – time to be with their son. 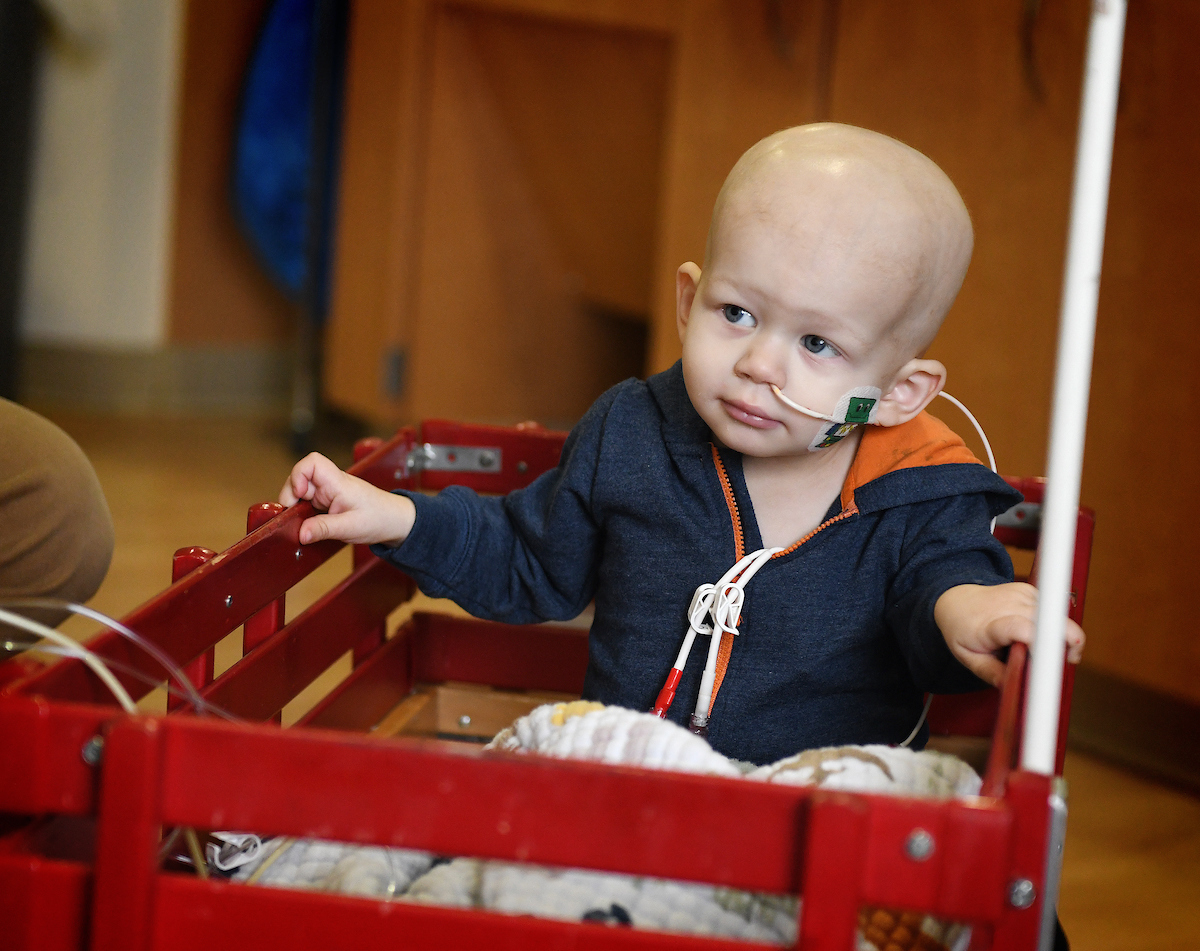 And then there are the thousands of others – many of whom they don’t know – who rally behind the scenes preparing meals, designing T-shirts, donating money, cleaning their house and praying. These are the Cheering for Charlie fans – over 5,000 strong on the couple’s Facebook page.

“To see these people just bless us, doing the work of Christ, it’s really inspiring,” said Stephanie. “It’s teaching us.”

“Humbling,” is how Cody, an IU Health employee, describes it. “When you’re in a place where you can barely help yourself and you have a lot of people reach out to help you, it’s been awesome.”

The focus of all that goodwill is little Charlie Smith, 19 months old, diagnosed at Riley Hospital for Children three months ago with high-risk neuroblastoma, stage 4.

His treatment plan is aggressive and will require several rounds of chemotherapy, surgery, radiation and immunotherapy over a 12- to 18-month span.

How does a parent process that kind of news, especially when they first thought Charlie just had a virus? After all, Charlie had been a perfectly healthy and happy baby who was on the verge of walking. Until he stopped eating and grew listless and tired over several days. The pediatrician felt a mass in his belly but believed it was stool and prescribed an enema to flush out his system.

The enema did produce results, but Charlie’s blood tests were abnormal, and Stephanie, a labor and delivery nurse at a south-side hospital, listened to her gut.

SHE WENT STRAIGHT TO RILEY 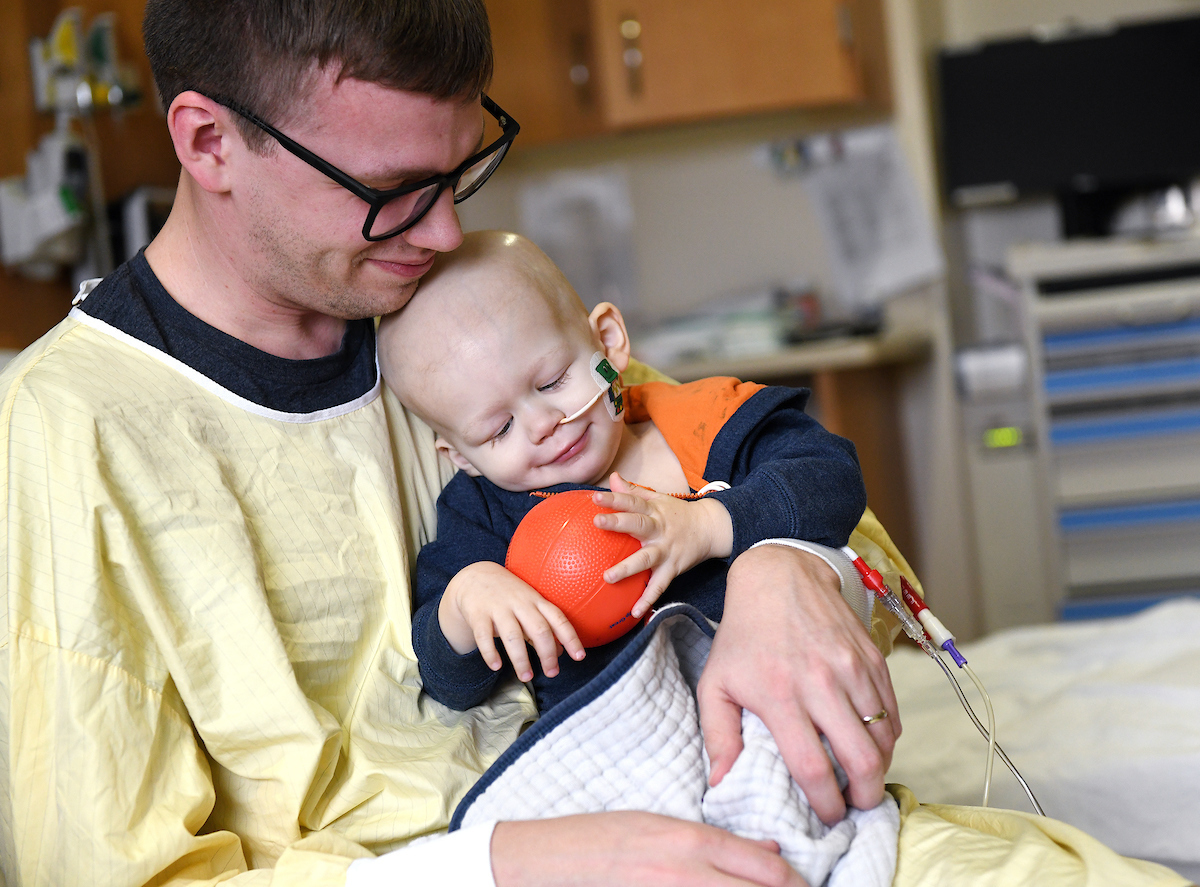 “Mama’s instincts brought me here to Riley, to the emergency room, and 12 hours later, that’s where we got our diagnosis,” she said, as she watched Charlie toss a ball in his hospital room. “They told us he had a cancerous tumor.”

The couple – high-school sweethearts who live in Franklin – were devastated, of course. But that wasn’t even the worst of it.

The fist-sized mass in his abdomen had metastasized. Neuroblastoma spreads rapidly, and a scan found spots above his left eye, in his neck, lung and arm. To learn that it had spread so quickly was even harder to hear, said Stephanie, who had hoped the tumor could be removed surgically.

Neuroblastoma is caused by a genetic mutation and is the most common tumor found in children younger than 1. Charlie was diagnosed at 16 months; his parents say his 1-year checkup revealed no problems. The cancer occurs slightly more often in males than in females.

That early November trip to the ED at Riley turned into a 49-day stay in the hospital, straight through Thanksgiving, but the family got to spend Christmas at home. Another blessing, they say. Charlie’s big brother, Henry, 3, was thrilled to have his family together at home. But it didn’t last long. 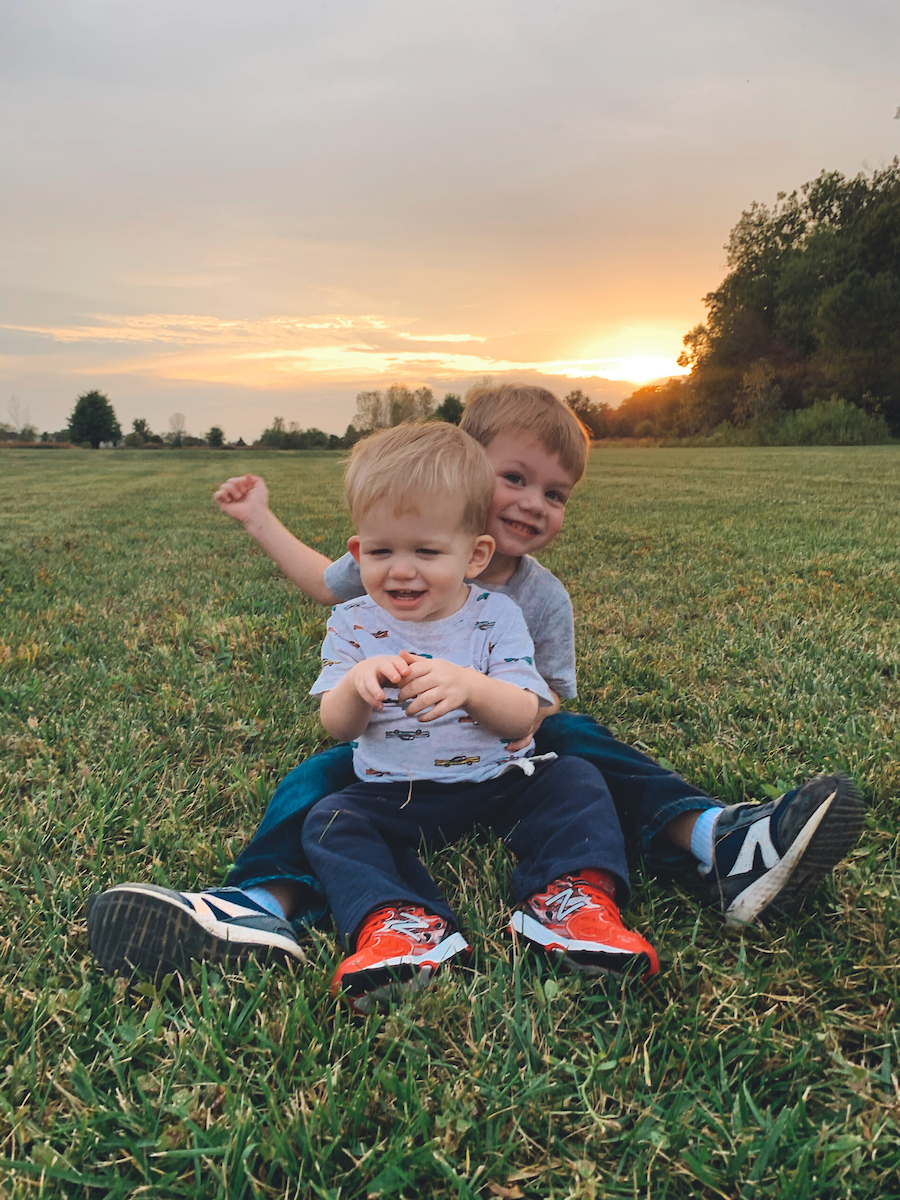 Charlie was in and out of the hospital with fevers, a sepsis scare (the results were negative) and for chemo in January. He will have a scan this week to see how the tumor in his abdomen is responding to treatment. At that point, doctors will determine when surgery can be done to resect as much of the tumor as possible.

Meanwhile, he goes about his days playing with his Hot Wheels and his dancing dinosaur, listening to the Bee Gees (his favorite dance music), seemingly unfazed by all that has happened.

Charlie says a few words – mama, dada, ball, car – but mostly “it’s just jibber jabber,” his mom said. And he’s doing a lot of that chattering during a visit to his room. He moves from tossing a ball to coloring on the door to riding in a wagon before settling on his dad’s lap for a bit.

“Compared to our first-borne, he’s our happy baby,” Cody said. “He’s much more smiley and giggly and playful.”

As if on cue, Charlie starts up again. One thing he has started saying clearly since he’s been in the hospital: “I want mama.”

He is mostly bald, not because his blond hair fell out but because his family had a “haircut party” before it could fall out, Cody said.

It wasn’t a happy party. “It was one of the saddest things to see,” Cody said. “He had such beautiful hair. My mom ended up coming over to cut his hair, and she was crying through the whole thing.”

He and his wife do their best not to transfer their anxiety onto their son. As Cody said, “We take turns having bad days. We’ve been blessed to have each other to balance out and can tell each other to take a walk or take a shower and get the cries out of your system because we’ve got to get back at it.”

FIRM IN THEIR FAITH

It’s an exhausting existence, both say, and they can’t imagine having to do it alone as so many other parents are forced to do.

“A lot of families on this unit are going through tough times as well,” Cody said. “We’ve had a great peace about whatever’s going on that it’s in our best interests. It’s definitely a different perspective than a lot of people hold.”

That’s the couple’s faith talking. A faith unshaken, perhaps even strengthened, by their situation. They see evidence of God’s hand in the compassionate doctors and nurses who care for their son and in the people who are following Charlie’s journey on Facebook. In the 150-plus people who lined up to donate blood at Versiti Blood Center of Indiana during the Cheering for Charlie blood drive last month. And in the members of the Franklin Fire Department who gave the family a tour of the station and helped get their garage door fixed. In the friends who have provided meals and in the strangers who have provided prayers. In the kind words and deeds of so many.

“It has blown us away to see the people who are inspired by our faith and by Charlie’s story,” Stephanie said.

They have a long road ahead, but they are firm in their belief that this journey will bless them in ways they can’t imagine. And they hold fast to one more thing, Cody said: “Riley is the place of miracles.”