This girl’s best friend is her teddy bear pup

The promise of a puppy kept Nyla Evans focused on beating back cancer. Now, Ny and Ty are growing up together.

It’s pretty hard to say no to a little girl with cancer. But for two years, that’s what Emily Hardy had to do when her daughter asked for a puppy.

Every time Nyla Evans went in for an appointment with Riley Hospital for Children oncologist Dr. Allison Yancey, she asked the same question: “Now can I get a dog?”

Dr. Yancey told her it was not a good idea to add a new animal to the household when her immune system was so weak. After about six months, she told her she could get a pet, but it would have to be a fish.

Nyla got that fish but never let go of the idea of getting a dog.

Finally, the 10-year-old’s persistence paid off. In November, “Ny” (her mom’s nickname for her) welcomed a cuddly, playful pup named Ty into her arms. Ny and Ty have become best friends.

Nyla was just 6½ when she was diagnosed with acute lymphoblastic leukemia. She spent a lot of time in the hospital, and after a visit by one of Riley’s therapy dogs, she started asking for a puppy of her own.

After 2½ years of treatment, Nyla and her mom started talking about what kind of wish she might like granted by the Make-A-Wish Foundation.

“We talked about different things she could do with her wish, places she could go, but she said if we go someplace for a week, she would probably forget that week at some point,” Hardy recalled.

“But if I get a dog, I’m gonna have that dog for a very long time,” Nyla told her mom. “I’d rather get a wish for something that will last for a long time.”

Once Nyla gets an idea in her head, it’s hard to shake it, Hardy said of her headstrong daughter. And even though mom was not wild about the idea of welcoming a four-legged pet into the household, she was not going to tell her daughter no again.

“When we were in the middle of treatment, it seemed like it was never going to end,” Hardy said. “I’m not particularly an animal person, but she deserved it. She never complained through the treatments, hospital stays, missing school … she just accepted it and did whatever she needed to do. So she inspired me to accept having a dog.”

The family worked with Make-A-Wish, who partners with a company that specializes in small-breed puppies. Nyla actually picked her pup from the company’s website, but it wasn’t an easy decision. She originally had a list of 18 dogs she liked. When Ty was 8 weeks old, he was flown to Indianapolis, and the family picked him up at the airport.

Ty is what’s called a teddy bear dog – a mix of Bichon Frise and Shih Tzu bred to be cuddly, playful and good with kids.

“He has fit right in since day one,” Hardy said, noting that when they went to pick him up from the cargo area at the airport, he headed straight toward Nyla. The two have been inseparable since.

While Ty doesn’t sleep in Ny’s bed, he does sleep underneath, and that seems to calm the fourth-grader’s anxieties.

“Even with him under the bed, if he hears something, he barks and he sounds a lot bigger than he is,” Hardy laughed. “He helps her feel safe and protected.”

Currently, there are 550 wishes on hold in the Indiana, Ohio and Kentucky Make-A-Wish region due to the COVID-19 crisis. While these are mostly travel-related or involve large gatherings, other wishes – like Nyla’s – are going forward. 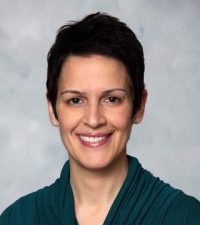