They thought their baby would not survive, but now he’s in preschool

“What happened? Only God can answer that,” says the mom of a Riley kid who defied the odds.

What must it be like to sit by your child’s hospital bed, thinking he is going to die?

Dr. Amanda Gosch can tell you what it’s like – the fear, the ache, the numbness. And the heartbreaking decision to post a Do Not Resuscitate order for your 1-year-old baby.

But in her case, and for reasons she can’t explain, her little boy did not die that night back in 2015 at Riley Hospital for Children. Whether it was the power of prayer or the power of medicine, she can’t be sure, but her son, Jake, survived that night and all the nights since, despite a difficult journey. 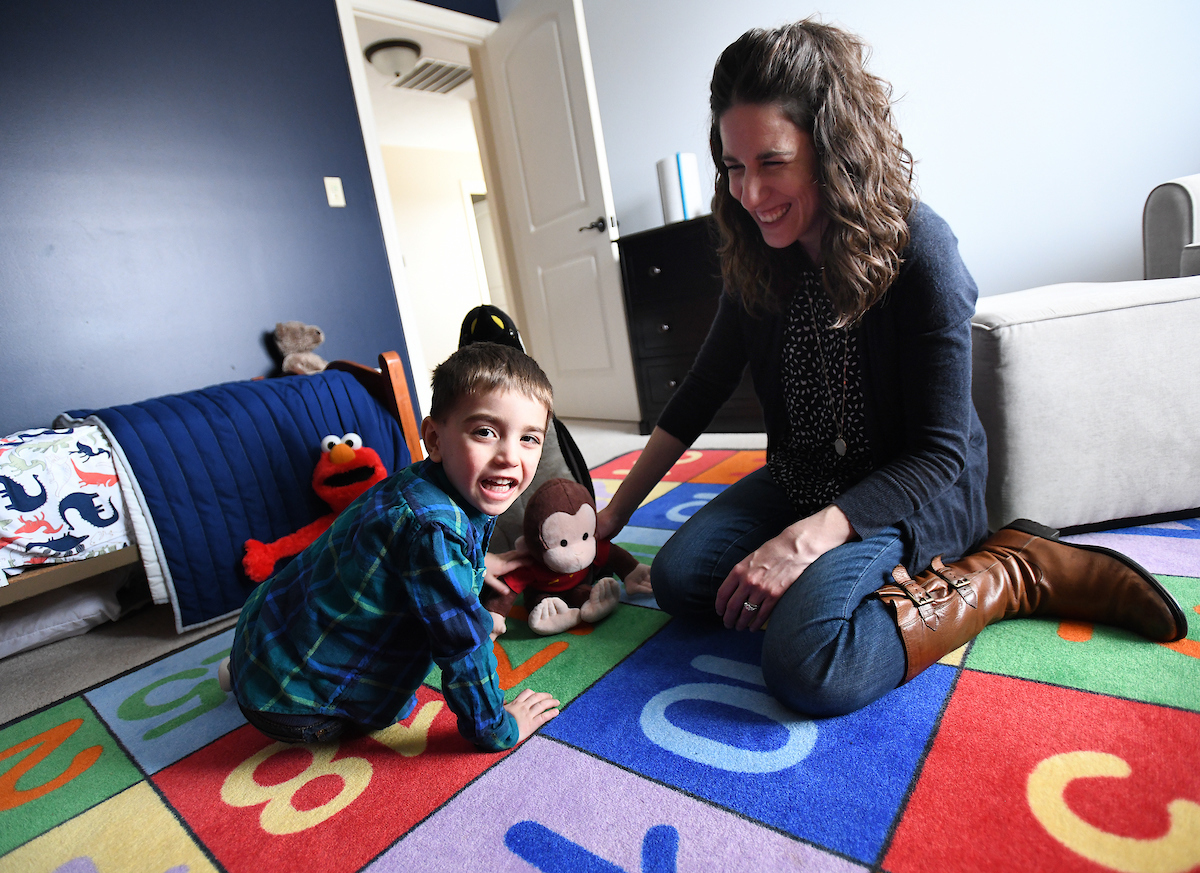 Gosch and her husband, Andrew Fitzwater, are only just now ready to share the story of their son, now an active 4 ½ -year-old. It’s been three-plus years since the worst of his days in the hospital, but the Plainfield family’s struggles didn’t end there.

All was well in the first year

Gosch has been an optometrist with the Glick Eye Institute, part of IU Health Physicians Ophthalmology, for six years. Jake, born in June of 2014, was a healthy baby. He was in the 99th percentile on the growth curve, and he was breastfeeding like a champ, his mom said.

It was at about 11 months that he started getting sick. Nothing too serious – a fever, diarrhea. He hadn’t really been too interested in solid foods until about 8 months, but soon he began rejecting them. When he began to look “puny,” the couple first thought maybe it was a food or milk allergy.

And that was when the family’s Riley adventure, as Gosch called it, began.

The week before Jake was admitted to Riley, “everything kind of tanked,” she said. They took him to a gastrointestinal physician on June 15, 2015, and later that day got a call directing them to take their son to Riley.

For someone who had little experience with hospitals, Gosch said walking into Riley that day left her feeling like a deer in headlights. “We were blindsided.”

Six months in the hospital 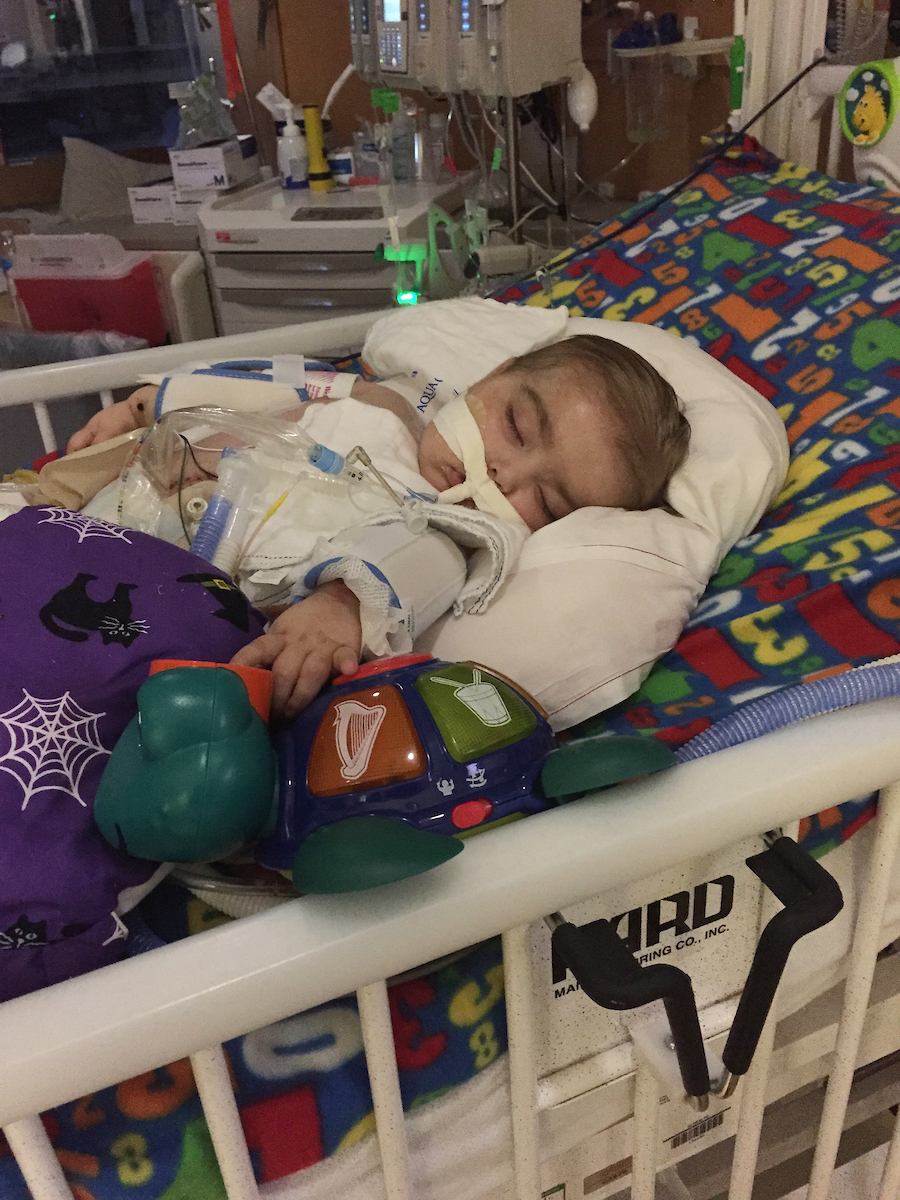 That would be the start of a six-month stint at Riley, broken up just twice by short trips home in the summer.

Jake’s illness was a puzzle, but after multiple tests, he was diagnosed with ulcerative colitis, an inflammatory bowel disease (IBD) that causes long-lasting inflammation and ulcers in the digestive tract. Because it is rare for an infant to be diagnosed with the condition, the medical team surrounding the family kept growing – immunology, GI, hematology-oncology, genetics.

Was it a symptom of something else, possibly a genetic disorder or an autoimmune disease, doctors wondered. Meanwhile, Jake was getting sicker and sicker.

Over time, they ruled out genetic and other issues, but the typical medications to treat ulcerative colitis weren’t helping Jake. The only option was to surgically remove the 1-year-old’s colon.

“You don’t want to do that to a little baby, but we got to a point of life or death,” Gosch said, who by then had run out of family leave time and was back at work, though her office was a quick walk – and an even faster run – from Riley.

Dr. Frederick Rescorla performed an emergency colectomy, removing Jake’s entire colon, or large intestine, on Oct. 23, 2015. That was followed by an ileostomy, an opening in the belly through which waste is removed from the body.

“We knew going into surgery that there was a chance he wouldn’t make it,” Gosch said. “But nothing else was working. As parents, we had to accept that reality.”

Then things got really hard

Jake made it through surgery and was moved into intensive care, where he would remain for five weeks. He was on a ventilator to help him breathe. Gosch said Jake was mighty sick before the surgery, “but you have no idea what sick is until you’re five weeks on a ventilator.”

Nov. 12 was Jake’s worst day, his mom remembers, and so it was their worst day too.

Both of his lungs had collapsed, and he was in septic shock. Gosch got the frantic call while she was at work: “Get here now,” her husband said. She could hear doctors in the background.

“I’m literally running over to Riley,” she said. “I walk onto the floor and the whole team is there, just looking at me. It was surreal, almost like a movie. They’re shaking their heads, saying there’s nothing else we can do.”

They took Andrew and her into a conference room across the hall, where the young couple would listen to the doctors and make the agonizing decision to sign a DNR for their son. As they were in that room, Gosch watched as a whole new care team began arriving across the hall – social workers, a chaplain.

She can’t say now how she held herself together, or even if she did.

“You’re numb. You put one foot forward, and honestly, you’re held up by a lot of prayer. You are in so much shock that you can’t even pray anymore. You have to depend on others to pray for you.”

And they did. Word got out among family and friends. Prayer groups lifted Jake and his parents up in that dark time. But all signs indicated it was just a matter of time before Jake passed.

His parents spent that night in the room with him, while more family slept in the lounge. Gosch vowed that she would not fall asleep, but at some point, fatigue got the better of her and she closed her eyes in the middle of the night, only to be awakened a couple of hours later by the murmur of a doctor telling her and her husband, “I can’t explain it, but his lungs are open.”

“He made it through the night,” she said, “and since that night he’s just improved. What happened? Only God can answer that.” 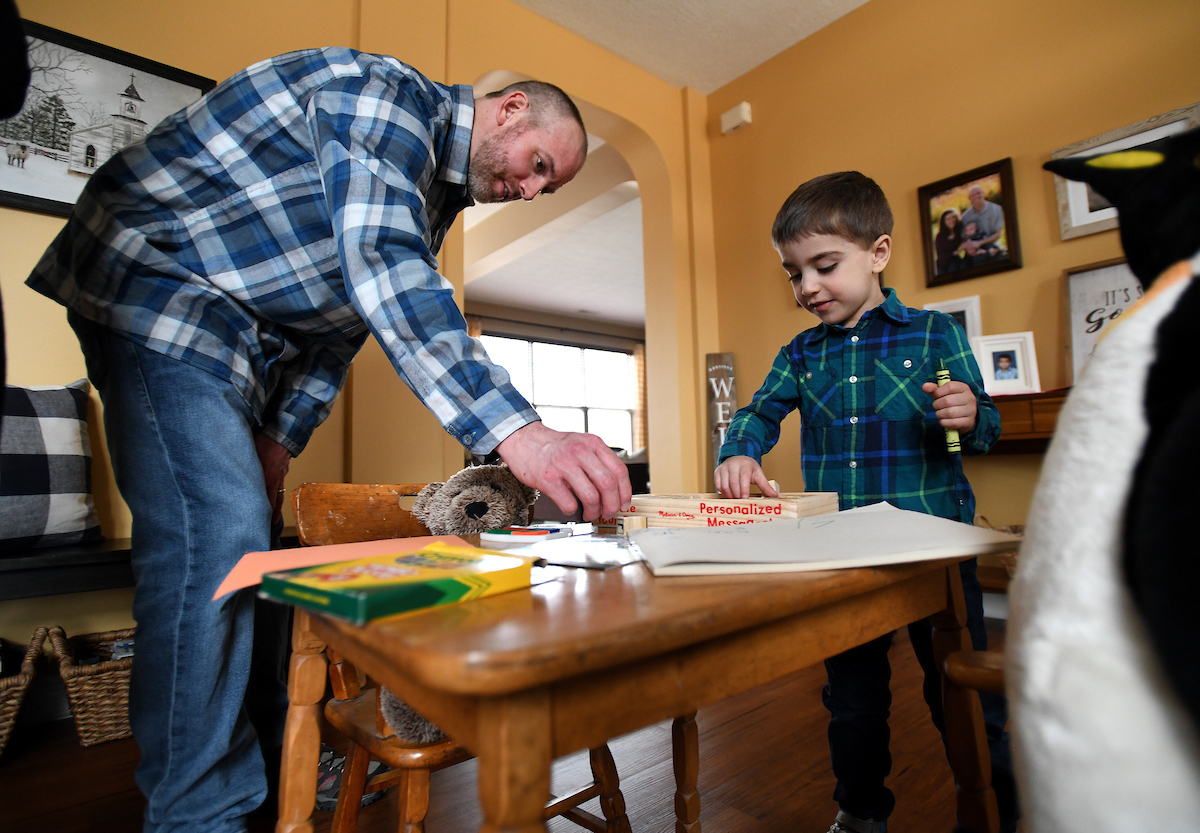 Jake got to come home on Dec. 19, 2015 – an early Christmas gift for the couple. He was 18 months old, and he had been weaned from the vent, though he still had a feeding tube.

But the transition to home after six months in the hospital was the beginning of another journey. He was like a newborn again, his mom said. The vent had really taken a toll on him. He had been almost in a comatose state for so long it was like he had a traumatic brain injury, she said.

“He couldn’t hold his head up anymore, he couldn’t sit up. Anything he had learned was gone.”

Though thrilled that their son was home, the couple found 2016 to be rough going. They had to get used to Jake not having a colon and the care that involved; and he had to learn to eat again and how to keep fluids up. He was admitted several times over that year for dehydration, sometimes into the ICU, which terrified his parents.

“You’re traumatized,” Gosch said. “You see ICU and you fear you’re going to go down that road again.”

But each stay was relatively brief, and today Jake is a social, strong-willed preschooler who loves to play outside and to build things – especially his wooden train set. He also likes to play school with his stuffed animals.

He didn’t learn to walk until he was about 2 ½, but he hasn’t slowed down since. He’s talking too, though his language skills are delayed. An MRI showed that his brain had atrophied somewhat, but he’s making gains every day. He’s in a developmental preschool, where he gets physical, occupational and speech therapy.

“We in our heart of hearts feel like he’ll catch up,” Gosch said. “Even though his speech isn’t great, he can spell the name of every kid in his class and he can count to thirty.”

His teacher believes he is still on track to enroll in kindergarten in the fall.

Return visits to Riley are not as frequent now, but when they do occur, Jake is greeted by the entire GI team, including his primary GI physician, Dr. Molly Bozic.

“Different docs will want to pop their heads into the room to see Jake,” his mom said. “They’re practically in tears. He’s come such a long way.”