She can’t cry, but this baby has a family’s love to keep her fighting

Their baby was born with a condition that pushed her abdominal organs into her chest, compressing her lungs. “Wondering if your baby is in pain and just unable to communicate is hard for a momma.”

Little Ava Brooks Breeden lies still in her hospital bed. Tubes and wires extend from her tiny body, attached to machinery that monitors her every breath and more.

Ava is seven weeks old and has already undergone two surgeries and multiple procedures to treat a not uncommon but little-known condition called congenital diaphragmatic hernia (CDH). The hernia created a hole in the muscle between the chest and the abdomen in utero, which allowed the contents of the abdomen (stomach, intestine, liver, spleen and kidneys) to move up into her chest.

Her parents, Jacob and Alyssa Breeden, learned of her condition during prenatal testing and have been surrounded by a Riley Hospital for Children at IU Health care team since before she was born full-term at IU Health Methodist Hospital. 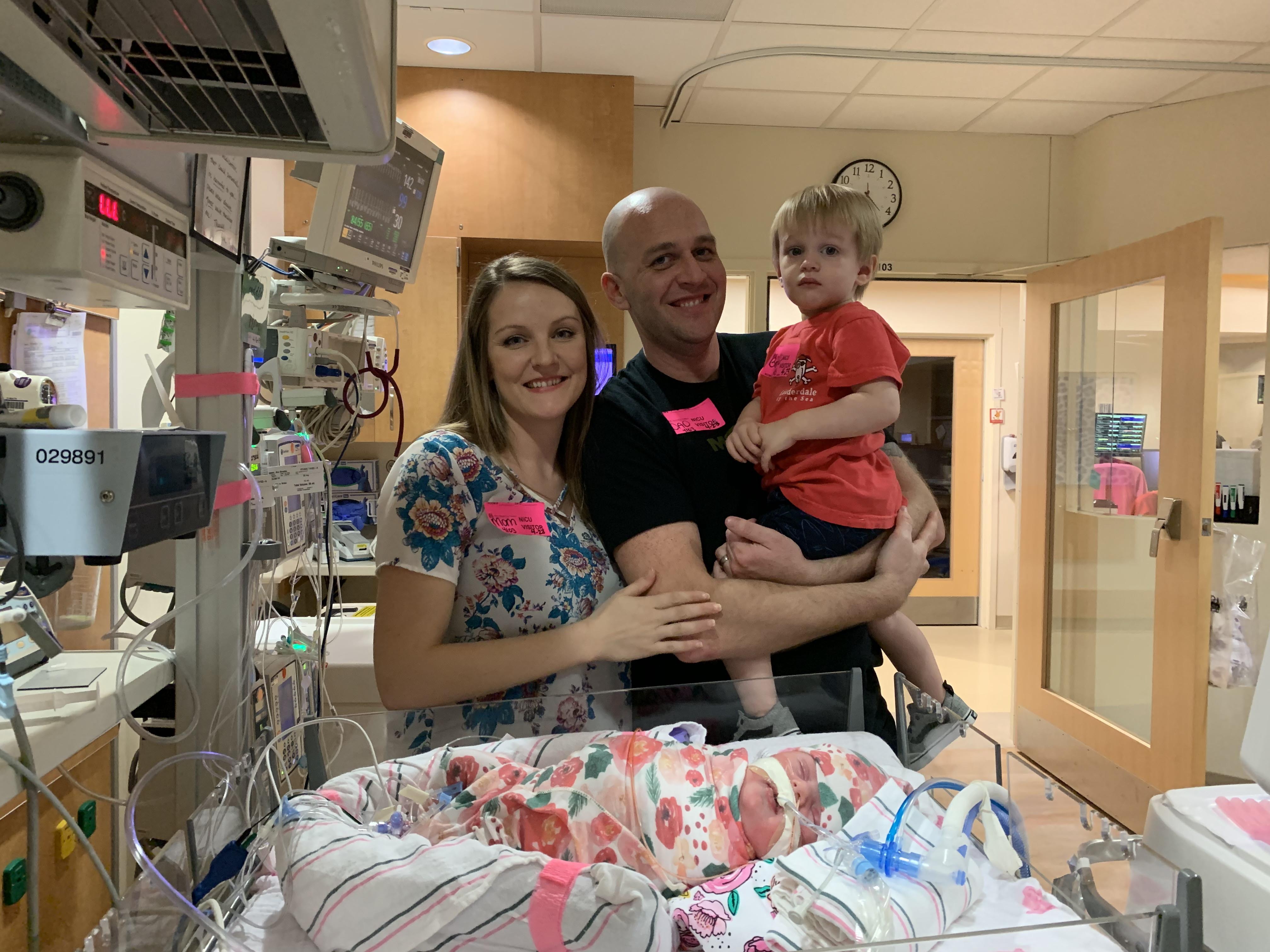 “We didn’t really know what we were getting into,” Jacob Breeden said, while stationed in his daughter’s room, as he has been pretty much every day since she was born. With him is his mom, Susan Hirschinger, who comes by frequently to dote on her tiny grandbaby.

Alyssa Breeden, a teacher, is home sick on this day. She doesn’t want to take a chance on spreading any germs to her daughter. Also home is Ava’s big brother, almost 2-year-old Tilman Curtis. Tilman just recently got to meet his sister in person when the flu restrictions were lifted at Riley.

Jacob, a commercial pilot, was able to take several weeks off after his daughter’s birth and now works hospital visits around his schedule. It’s been a challenge for the family, dealing with Ava’s condition, but it’s made easier by Riley team members like NICU nurse Amy Haggard, Jacob said.

“She has taken really good care of us,” he said of Haggard. “She is very attentive and knows Ava’s condition.”

For her part, Haggard says Ava’s family is “amazing.” Haggard was Ava’s nurse the day she was born and has cared for her many times since then. Between her parents, grandparents, brother and other family and friends, the little girl has terrific cheerleaders, she said.

“Miss Ava is such a fighter. I’ve seen that little girl go through so much. Her journey isn’t over, and she has big things ahead of her, but from what I’ve seen, she has the moxie to get through anything.”

Part of the struggle has been that Ava has been kept sedated since birth to keep her underdeveloped lungs from working too hard. The crowding in her chest prevented one of her lungs from growing to a normal size.

What that also means is that Ava doesn’t cry. While a newborn’s cries can be a sign of distress, Ava’s parents would love to hear her cry. Missing that sound “is pretty awful,” Jacob acknowledged.

There have been a lot of “normal” baby things that Ava hasn’t been able to do so far, Alyssa said by phone.

“We didn’t get to hold her until she was a month old. She didn’t get milk until around that same time. But her not being able to cry has definitely been a hard one,” she said. “Wondering if your baby is in pain and just unable to communicate is hard for a momma.”

But the couple of hours a day that they get to hold their daughter now is magical.

“She’s more comfortable and sleeps better when we’re holding her,” Jacob said. “It relaxes her.” 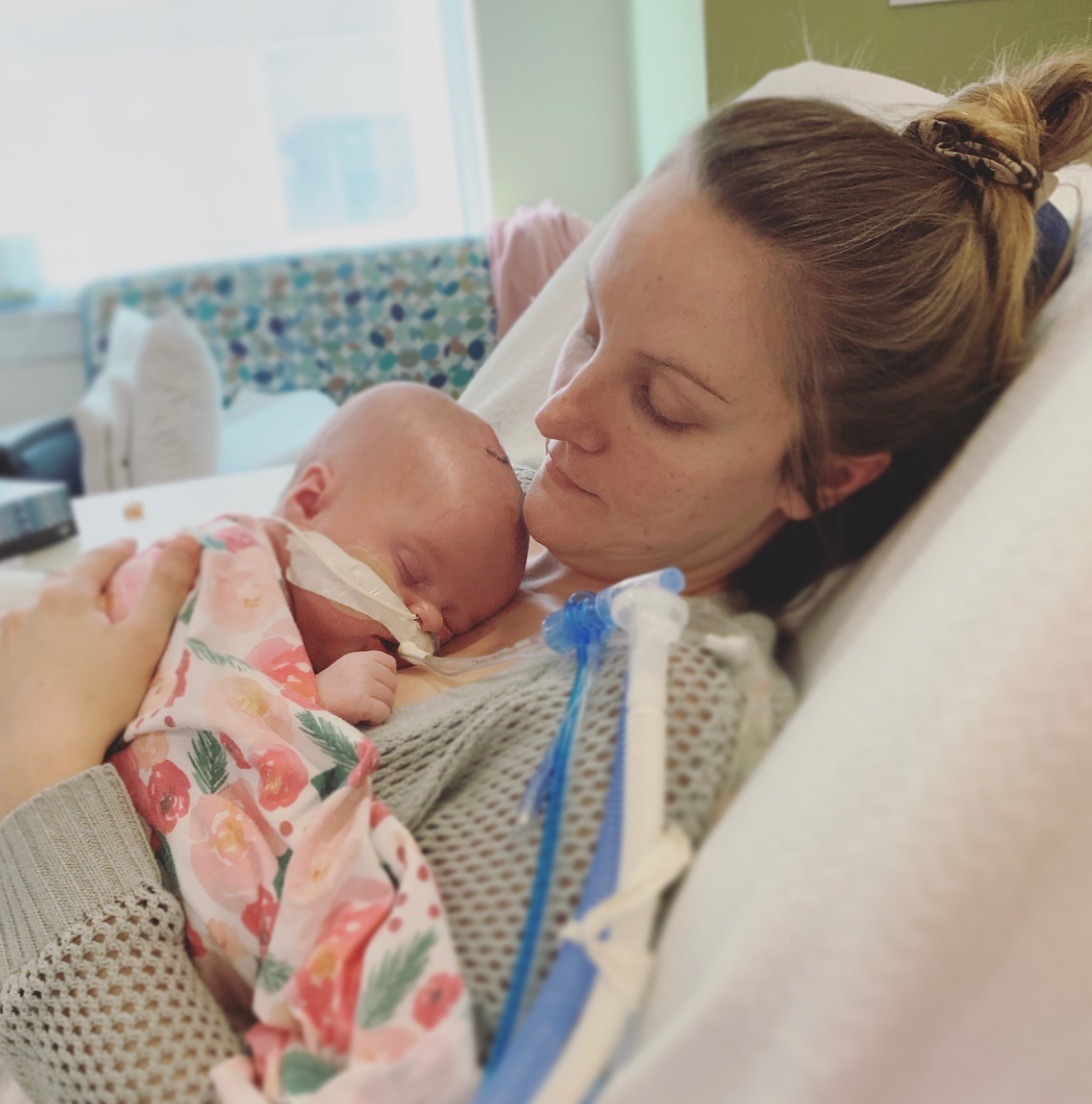 Hirschinger can’t wait until she gets to cuddle her youngest grandbaby. She has already helped raise more than $2,500 for Riley so the family can get a Riley wagon named for Ava. The plate on the wagon will say: Hitch your wagon to a star – Ava Brooks Breeden.

Ava’s parents have already jumped through several hurdles with Ava, and they know there are more to come, but this week the focus is on weaning her off some of her meds and making sure she is resting to build her strength, Alyssa said.

She values the support she and her husband have received from the Riley team since before they even met their daughter.

“We had a care conference with our team at 30 weeks,” she said. “Being diagnosed prenatally was very difficult emotionally, but having a team already in place that was familiar with Ava’s specific case and had a plan for her care before her arrival was invaluable.”