Her twin died shortly after birth, but 8-month-old Kennedy Wahr is fighting to go home.

When she gave birth to premature twins at IU Health Methodist Hospital last May, Brittany Wahr had one prayer. Let them live and let them come home by 2019.

The new year looked a long way off then, but it’s here now, and Wahr and her husband, Rob, are still praying, despite heartbreaking setbacks. 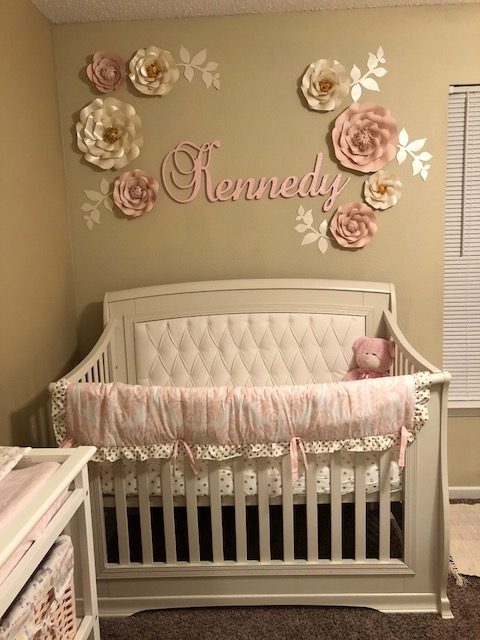 Born at just under 25 weeks, their little girls each weighed 1 pound, 8 ounces. Kinsley Wahr lived just three days. Kennedy Wahr is now 8 months old, but she has yet to leave Riley Hospital for Children at IU Health. Her nursery is ready for her at the Wahrs’ home in Fishers. It’s been ready for months, but even after graduating out of the NICU just before Thanksgiving, Kennedy is not ready to go home.

She has had a multitude of health problems since birth, including respiratory distress; an intestinal disease called NEC (necrotizing enterocolitis); fluid accumulation in her brain requiring a shunt; various infections; and a painfully distended abdomen. 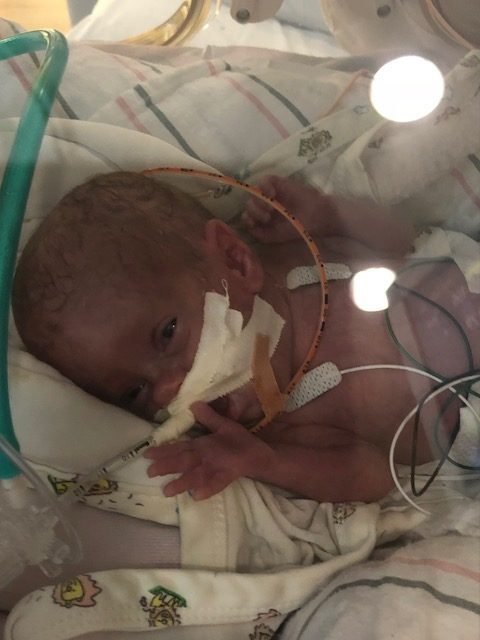 Kennedy is now in the PICU, where she is hooked up to a ventilator to help her breathe. Her parents watch anxiously as their fragile daughter is wheeled out of the hospital room for yet another test.

“It’s been a hard few days,” Brittany said, the anguish visible on her face. “She had a shunt put in Tuesday and now her stomach is distended. She’s uncomfortable, she’s very agitated, and they have to keep calming her down with drugs.”

Almost in the same breath, she says her daughter’s spirit gives her encouragement.

“She’s such a fighter, she’s the strongest baby I’ve ever seen. It’s just hard to watch her suffer.” 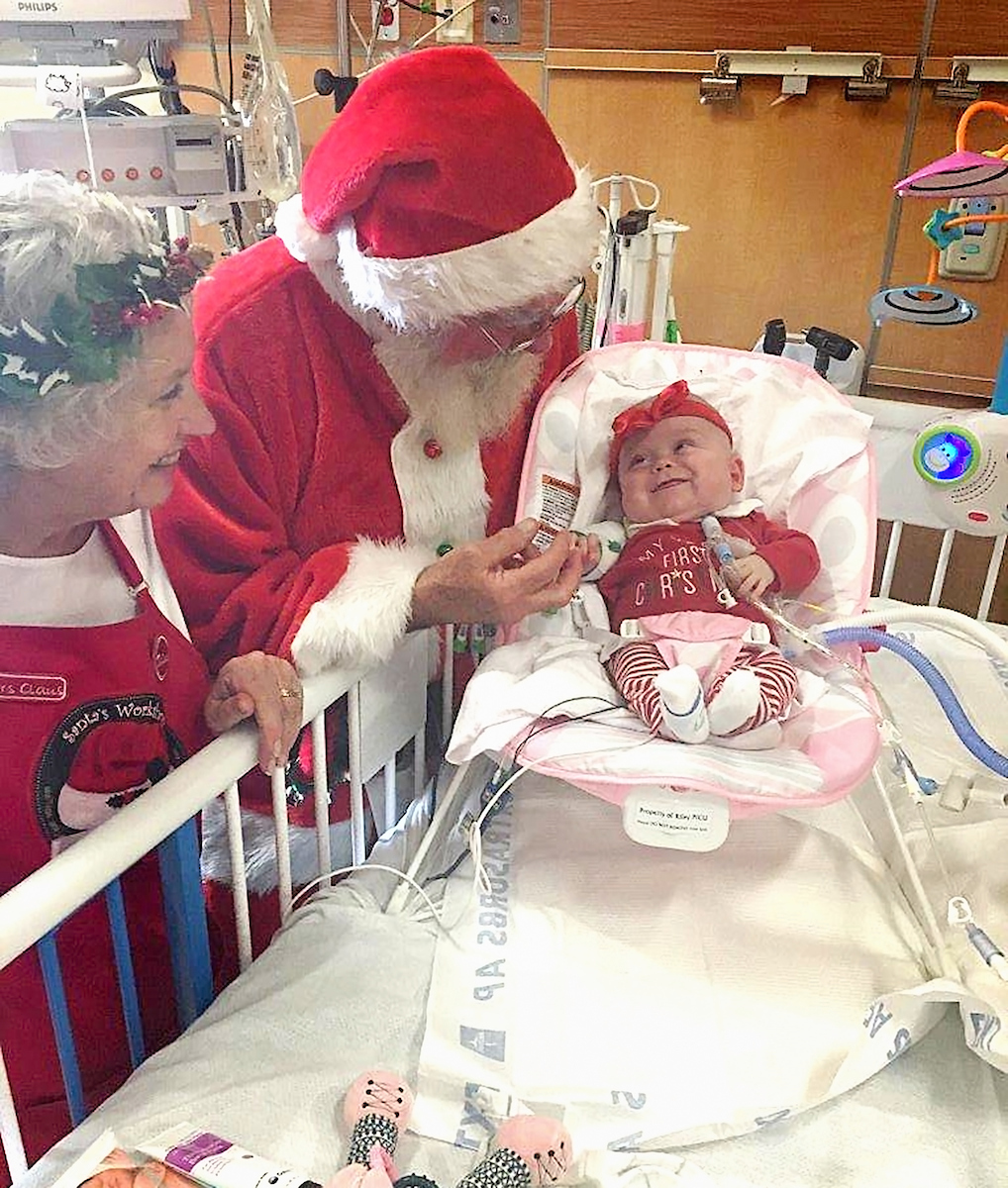 But on the good days – like when Kennedy beams during a visit from Santa and Mrs. Claus, when music calms her, and when the mobile above her crib enthralls her – Brittany allows herself to think about the future. Specifically, May 15 – Kennedy’s first birthday.

“I want her home for her birthday so bad.”

So far, 2019 has not played out like the couple hoped. Two weeks ago, Brittany was hospitalized for several days with a suspected case of norovirus, while Rob hopped between Riley and IU Health Saxony Hospital to visit his daughter and his wife. The worst part for Brittany was being away from Kennedy for a week.

The Wahrs moved to Fishers from Evansville a year ago to seek better medical care for Brittany, who suffers from an autoimmune disorder called antiphospholipid syndrome (APS), which contributed to three miscarriages before she gave birth to the twins last May. 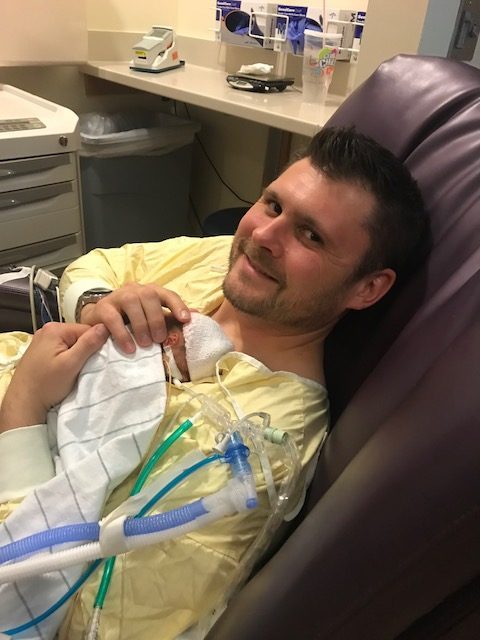 Now they’re thankful not only for her care through IU Health, but for their daughter’s, too.

“Although it’s been difficult, we are happy to have this type of facility here and for the people who are helping take care of Kennedy,” Rob said.

“It’s comforting when you leave at night that there’s good people and staff here,” agreed Brittany.

Though he’s not part of Kennedy’s care team, neonatologist Dr. James Lemons stopped in to check on the baby and visit with her parents last week. Lemons is a member of Second Presbyterian Church, which the couple attends.

“I got to meet them down on the newborn unit several months ago,” Lemons said. “It’s been a really tough journey for Kennedy, but she couldn’t ask for better parents.”

For their part, the Wahrs are grateful for the medical team’s support and compassion and also for their “random” decision to visit the church on Easter Sunday last year. The congregation and its pastors have lifted the family up as the stress threatens to wear them down. 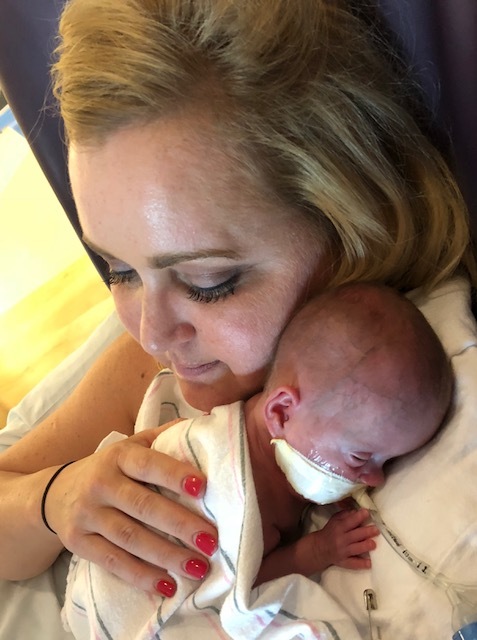 Through it all, Kennedy’s smile and spirit keep them going.

“When she’s feeling good, she’s such a happy baby, and she loves attention,” Brittany said. “But it’s just so rare.”

She laughs when asked how she and her husband care for themselves in the midst of this journey. “We just move to the next day, to the next minute, the next hour,” Brittany said.

“When we see her happy, we know there’s a reason to keep moving forward because she’ll get there eventually,” Rob said.

And along the way, they’ve met other people going through similar challenges who share their story in the hopes that it will let couples like the Wahrs know they’re not alone. Brittany and Rob appreciate every kind gesture, every story, every reassuring visit from the NICU team who still come up to check on Kennedy.

“I know there are a lot of people out there having rough journeys as well,” Brittany said. “It’s helped me to read their stories on Facebook, so if telling our story can help someone, it’s worth it.”