Diagnosed with a rare genetic disorder called Apert syndrome, 7-year-old Sarah Ewing wakes people up with her innocence and joy, her mom said. “She reminds them that their life is beautiful.”

Jeannie Ewing knew something was wrong the minute she delivered her baby girl by cesarean section. She couldn’t see her daughter, but she could sense the mood in the room shift.

A silence fell over the delivery room in the Goshen, Indiana hospital. Ewing remembers the doctor coming over to talk to her husband, then asking her if there were any genetic anomalies in her family.

As she felt the panic rise in her chest, Ewing turned to her husband, Ben, who came over to break the news gently.

“Her fingers are fused together and she might need a few surgeries, but I think she’ll be OK,” Ewing recalled her husband saying.

That was seven years ago. Sarah Ewing was soon diagnosed with Apert syndrome, a rare genetic disorder characterized by skeletal abnormalities. The family was referred to Riley Hospital for Children for treatment.

The diagnosis terrified Jeannie Ewing, even as she got to take her otherwise healthy second-born child home two days after the delivery.

“When you hear news that is unexpected like this, there’s a shock, a disbelief. And I think a lot of us go through this grieving period,” she said. “My husband and I cried together in the hospital as I was holding her. We didn’t know her prognosis.”

“WE WERE KIND OF LOST” 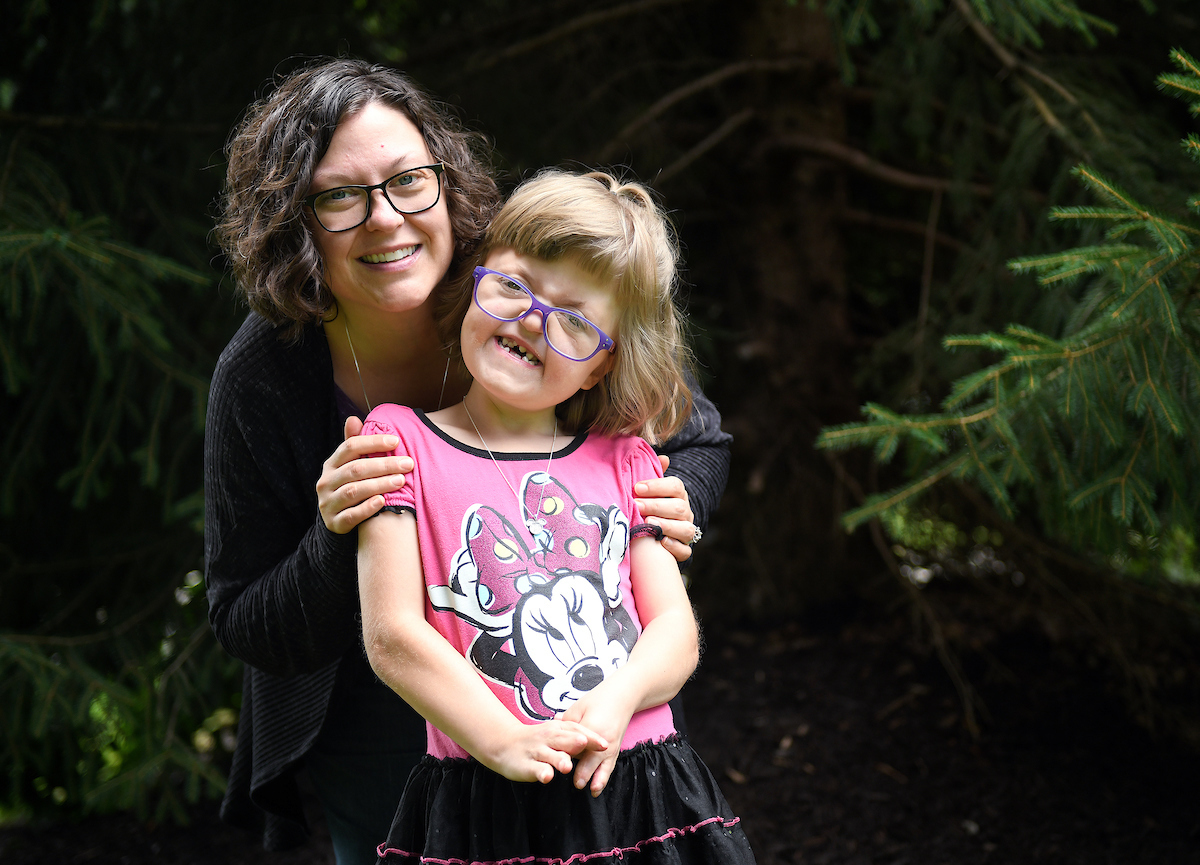 Seven years later, Sarah is a bubbly, active first-grader. As her mom talks to visitors in the family’s backyard, Sarah and her protective older sister race around the yard and up and down the slide, while a teenage babysitter keeps watch.

The signs of Apert’s are evident on the little girl’s face as she awaits another surgery. A key feature of Apert syndrome is the premature closing of the bones of the skull (craniosynostosis). This prevents the skull from growing normally and affects the shape of the head and face.

Children with Apert’s, which is caused by a mutation in the FGFR2 gene, can have developmental delays. About 70% have a reduced IQ, but some have normal intelligence. Sarah tests at about a 3- to 4-year-old level, though she reads well. Patients also have varying degrees of webbed or fused fingers and toes.

Sarah has had eight operations already, including cranial reconstruction and separation of her fingers. She will have another cranial surgery likely within the next year. Among the specialists she sees at Riley is Dr. Laurie Ackerman, pediatric neurosurgeon.

Jeannie is grateful for the care her daughter has received, especially in those early days when the diagnosis and everything it entailed was so new.

“The CVR (Cranial Vault Remodeling) was our first experience at Riley, and we felt they went above and beyond,” Jeannie said. “They just really cared about our family and walked with us. We didn’t understand the diagnosis at the time. We were kind of lost.” 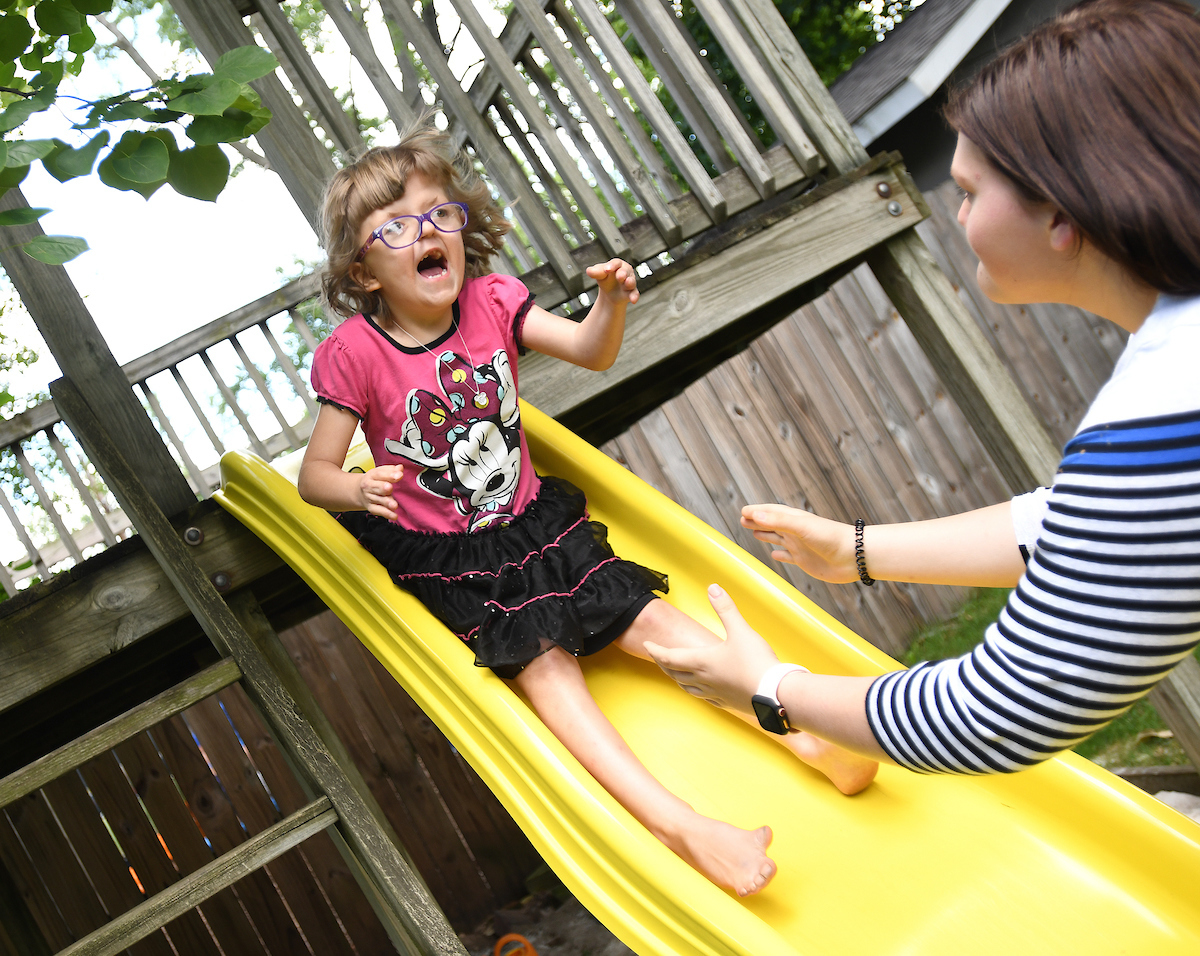 The Fort Wayne family has slowly found its way, connecting to the Cleft & Craniofacial Anomalies Program at Riley, as well as two Facebook groups. Jeannie met a friend virtually through those groups. That friend and her 15-year-old son who has Apert’s live in Israel. The families connect on Zoom, with Sarah and the teenager understanding each other in a way no one else does, Jeannie said.

Jeannie, who also has three younger children (none of whom has Apert’s), began a writing career after her daughter’s diagnosis. She has written seven books and contributes to several websites.

“It’s not always about Apert’s, but when you have a child with a rare disease, it really shifts and deepens your world view,” she said. “So everything I write is influenced by that.”

She also established the Love Alone Creates Facebook page, where she chronicles her family’s journey.

Riley has provided services to patients with facial anomalies since 1933. Its program was one of the first established in the U.S. and remains at the forefront of pediatric and facial reconstruction.

“Apert’s is such a nuanced condition; it develops differently in people,” Jeannie said. “We have met kids who are nonverbal and non-ambulatory. Then you have others like Sarah who are fairly independent.”

Just then, Sarah, wearing a Minnie Mouse dress, runs over. “Mommy, I went down the slide!”

She is obsessed with Minnie Mouse, her mom says. Stuffed animals, pajamas, shirts, slippers, books, movies and hair ties are just a few of the themed items she treasures. She longs to go to Disney World someday to meet Minnie in person.

The innocence she projects is one of the gifts of Apert’s.

“Sarah wakes people up. She reminds them that their life is beautiful,” Jeannie said, remembering one incident in a waiting room where Sarah met a man named Steve who was filling out some paperwork in the doctor’s office.

The two chatted for a minute, then Jeannie suggested Sarah leave “Mr. Steve” alone, but what he said surprised her.

“You know, I received some really bad news today, and your daughter just changed my life today. She changed my perspective.”

That has happened a lot in Sarah’s seven years. Jeannie can attest to that personally.

“She grounds me. She brings me back to what is beautiful about this particular moment in time,” Jeannie said. “Whether it’s a song, a bug, the sunshine. The simplicity and the purity and the innocence that she maintains is a huge, refreshing light.”

Not that any of this is easy. While Sarah is a happy child, she has her moments. And it’s in those moments that Jeannie and Ben struggle to understand and respond appropriately: Is this her Apert’s coming out? Is it a sensory issue? Is it her developmental age or maybe her attention deficit hyperactivity disorder? Sometimes it’s a combination of everything. 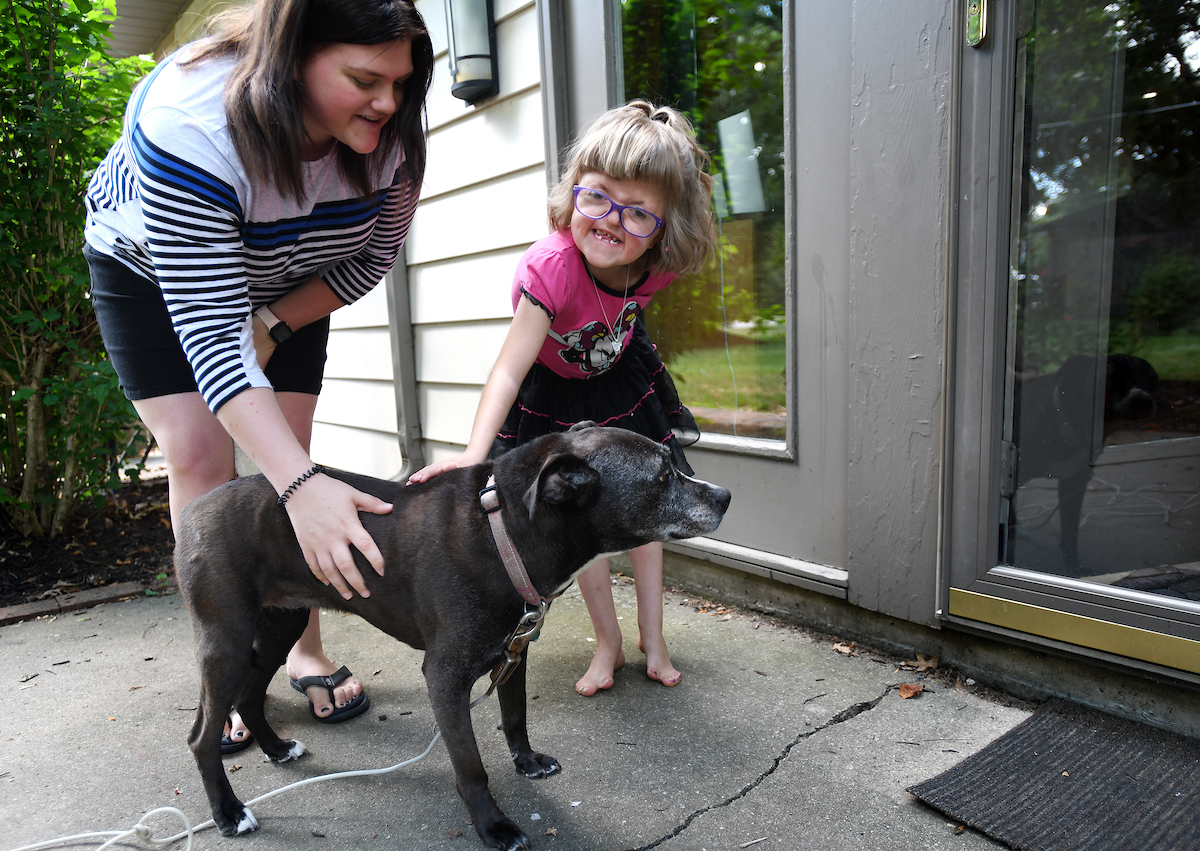 So, adjusting their expectations and how they parent and discipline is challenging. Still, Sarah is a blessing unlike any other, her parents agree.

“There’s an ongoing pain, a heartache,” Jeannie acknowledged. “At the same time, even though I struggle every day, I see how I need Sarah and how the world needs Sarah. I notice how she encounters people with this natural effervescence – it’s visible how it changes people. It’s almost like they come to life again.”

Other than the upcoming midface advancement surgery, Sarah will undergo dental surgeries to give her teeth room to grow. But on this day, she was looking forward to going back to private school, seeing her friends and working with her teachers again.

In the past year, she has become more aware that she looks different, her mom said. But the couple remind all of their children that everyone is different and that is a good thing.

“It doesn’t mean we have to be scared of anyone who looks different or speaks differently or acts differently. It’s important to treat them like a friend.”

Ben and Jeannie had their youngest child last March, just when the coronavirus took hold in the United States. Living in a state of uncertainty has forced her to revisit a lot of old fears, particularly as it relates to Sarah and her life expectancy.

“When I held Sarah in my arms for the first time, I cried because I didn’t know if she was going to live or die. And now we’re raising children in the midst of this COVID world. As a mom, it makes me always think about our mortality,” she said.

“With Sarah, I’ve always had that in the back of my mind. But now with COVID … it can snatch you like that. It’s just scary as a mom because you realize how little you can control and how much you have to surrender. You have to be cautious, but if you really want to have that internal strength and peace to do what is best for your kids, you can’t be worried all the time.”

Coming soon: We’ll share the story of a 44-year-old man who also has Apert syndrome. A Riley patient most of his life, the married father of three (with one on the way) is an attorney in Indianapolis.