The Tiny Angel Who Guided Her Family To Riley

Their precious Sandra was treated at Riley for spina bifida before passing away. Because of Sandra, her father, mother and three sisters were all led to work at Riley.

The trees and telephone poles were whizzing past, a total blur. Maria Rodriguez Acosta sat in the backseat of the car, clinging to her baby sister.

It didn’t matter that the car was going so fast and the outside world was a blur. The tears welling up in Maria’s eyes, pouring out, made it hard to see anything, anyway.

Here she was just a young girl, 11 years old, with her baby sister Sandra in her lap. She was holding onto the 14-month-old as tightly as she could. Willing her to open her eyes and giggle.

Sandra, born with spina bifida, had just suffered a seizure at the Rodriguez’ Indianapolis home, a seizure that wouldn’t end.

Her mother, Genoveva, and Maria knew the routine. If a seizure lasted more than two minutes, Sandra should be taken to Riley Hospital for Children, where she was a patient.

“I was the one holding her while she was having the seizure as we were trying to get her to the hospital,” Maria, a patient care assistant at Riley, said earlier this month from the hospital. “I was so scared and my mom was rushing. I could see it in her face as she drove how terrified she was. She didn’t know what else to do, but drive.”

But that’s not how Maria or any of the Rodriguez family wants to remember the girl they call their “little angel.” They’d rather remember how she beat all odds living past her first birthday, how she brought such joy to all of their lives.

And how she led them -- her mother, father and three of her sisters -- to work at Riley, pulling them from a life of struggle to a life of comfort.

“Because of her, we are where we’re at,” said Genoveva, a patient service assistant at Riley. “I’m thankful. To us, Sandra was our angel that guided us.” 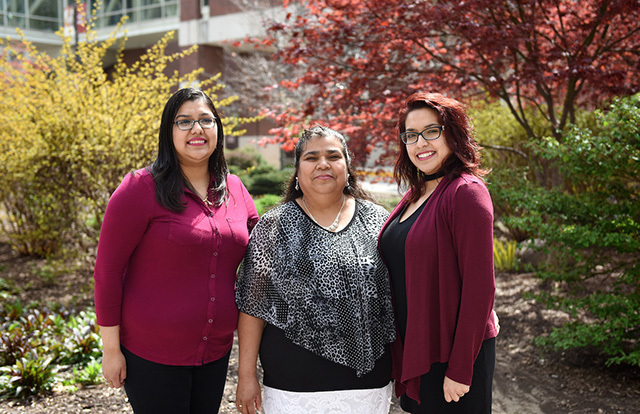 There never was a question for Genoveva or her husband, Enrique. Not one. They would be keeping this baby, their sixth child, even though doctors told them she wouldn’t walk or talk or do much of anything at all.

They told her she might even die within hours of her birth.

It was on an ultrasound that doctors first saw the hole in Sandra’s back. She had spina bifida. She also had fluid leaking from her spine into her brain, a condition called hydrocephalus.

Gevoveva cried right there at the ultrasound. She cried as she was told her options.

“They told us that she really wasn’t going to be anything but a vegetable,” said Maria, now 25. “That she wouldn’t have much of a life at all. She proved all of them wrong.”

The Rodriguez family credits the doctors at Riley for that – and for giving them hope others didn’t.

Sandra’s head was large and heavy because of the fluid and she had a shunt in her brain. But Sandra would giggle.

“I loved her laugh so much,” Genoveva said.

Sandra would use her eyes to follow the sounds of her family’s voices, even moving her head a little at times.

Her family adored her. They couldn’t get enough of this sweet angel.

There was Enrique, the person no one disputes was Sandra’s favorite. She was a definite daddy’s girl. Sandra wasn’t supposed to be verbal and, for the most part, she wasn’t.

There was Genoveva, the devoted mother who also had that critical role of being a makeshift nurse for her daughter. There were the four older sisters, Yemie, Maria, Alicia and Karina and older brother Fernando.

They would get right in Sandra’s face and coo and sweet talk to her. They dressed her up in an Indiana Pacers outfit, her chunky thighs poking out.

All the sisters quickly learned the medical world, helping with Sandra’s care.

So, it’s no surprise that they ended up right back where it all started.

Sandra spent much of her life at Riley, and the whole family got to see just how kind the doctors and nurses were. How friendly the people at the hospital were, the secretaries and medical assistants, the managers and the people who cleaned their rooms.

There was Sandra’s only Christmas in 2002. The family, trying to get home for the holidays, ended up at Riley after getting in a car wreck on Christmas Eve. 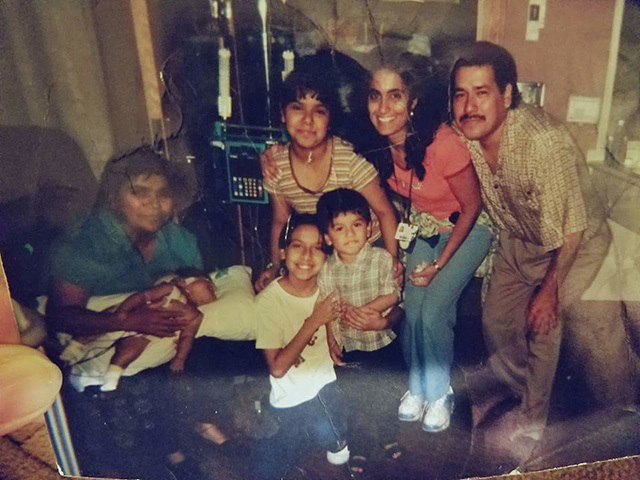 “That was a huge memory for me,” said Alicia, 24, team leader of the PSAs at Riley. “The nurses took us right into their lounge. They said, ‘Eat whatever you want, as much as you want.’”

The next morning, the Rodriguez family woke up at the hospital to gifts -- Barbie dolls and art supplies for the girls, a truck for little Fernando and a huge basket of food for Enrique and Genoveva.

This hospital, Enrique started thinking, sure would be an amazing place to work.

Just weeks later, while Sandra was being treated in early 2003 at Riley, Enrique found out about an opening for a job as a patient service assistant, cleaning rooms on the infant unit.

He was used to working two or three jobs to make ends meet. He was used to factory work, so Enrique was thrilled when he landed the job.

Now, he could work and still come visit his baby girl and wife at Riley. It made the tough times a little easier. Even as they waited those days after that terrifying seizure, Enrique could still work.

Sandra passed away in April of 2003, on Easter. The family no longer needed to come to Riley, yet they wanted to.

Enrique helped his wife get a job as a PSA. She still works at Riley cleaning rooms. Three of the older sisters worked at the McDonald’s that used to be inside Riley during high school.

And from there, they didn’t leave.

Alicia, in her eighth year at Riley, was recently promoted to that team leader post. 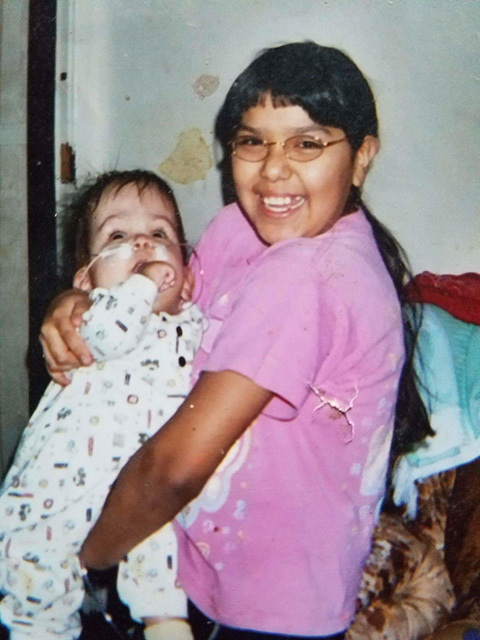 “I look at the patients and I think of Sandra, you know?” Alicia said. “Every day, I’m like thank you. If it wasn’t for Sandra, I wouldn’t be where I’m at.”

Maria, who started working as a PSA, took training to become a patient care assistant. She now works side by side with nurses to help, doing patient feedings, taking vital signs and just being one of those kindhearted Riley people that used to help her family.

“I see all these kids who come in and they remind me of Sandra and it makes me want to do more for that patient,” Maria said. “She’s definitely made me stronger.”

Yemie spent eight years at Riley, working in the cafeteria, before deciding to stay home with her five kids. Karina hasn’t yet made the move to Riley, but at 22, her dream is to become a nurse.

It’s almost unfathomable to think that because of their little angel, all three women could one day be nurses.