The stress is real, but so is the determination to heal

Pediatric intensive care nurse says the strength of her team helps lift her up during these hard days in healthcare.

As a nurse in pediatric intensive care, Kristen Freeman is used to being prepared for anything.

She figures she’s like many of her colleagues in the PICU at Riley Hospital for Children at IU Health. That is, a Type A personality. Somewhat of a perfectionist. Likes to have all the answers. Knows what to do in every situation.

So imagine for a minute what it’s like to be in a battle against an unknown enemy, where there are no clear answers, no sure treatments.

“It’s been very stressful,” Freeman says. “We’re typically over-prepared for situations, and obviously this is something that we have never seen before. That’s been very difficult for us.”

She’s talking about COVID-19 and the strain it has put on healthcare workers the world over, but specifically, at Riley.

While the virus hits adults the hardest, there are pediatric patients, and the PICU has had to learn to care for their COVID patients quickly. A simulation unit set up on the floor has helped prepare the team of about 200 nurses, physicians and respiratory therapists. But it’s all coming at them pretty fast.

“This has changed everything we know and do as nurses,” Freeman said. “When an emergency is happening, we all want to rush in and help. With these patients and these situations, we can’t do that.”

That’s because the virus is highly contagious, so team members must wear personal protective equipment (PPE). It takes several minutes to put on the equipment, and the risk of contagion requires that a limited number of people enter a patient’s room in isolation.

The goal is to provide care for these patients as safely as possible – both for the patient and the team members. That means typically one nurse, one physician and one respiratory therapist enter the room, where they may stay for an extended period. Outside the door is a backup team.

After trying different ways of communicating between teams, they settled on a speaker phone, enabling both teams to hear in real time. Other methods weren’t efficient or fast enough.

“It’s been very challenging, but it’s also been incredible to see physicians, respiratory therapists, nurses, pharmacists, everybody who is part of this team work through all these issues,” she said, “while keeping as few people exposed as possible.”

When she talks about how the virus has changed the way she does her job, she’s talking about the thing she loves most about nursing – being at the bedside, getting to know her patients and their families.

She’s used to having parents at the bedside too, talking to her when kids are sedated or need to be put on a ventilator. In the past, they were able to tell her about their child – what grade they were in, if they had pets or played sports or what they liked to watch on TV.

Now, because COVID patients are in isolation, parents can’t be at the bedside. So Freeman and other nurses call families and find out what they can about their patients so they can talk to them when they go into a room. Even if that patient can’t respond.

“I know they can’t talk back and it’s probably incredibly scary because they’re so isolated in there,” she said. “It’s hard to navigate, but we’re figuring out ways around it.”

Freeman has been a nurse in the PICU for eight years. It’s her dream job. She knew from the time that she volunteered as a camp counselor for kids with muscular dystrophy that she wanted to work with children.

“Muscular dystrophy is such a complex medical condition, but I just loved being able to look past that and see the kids for who they were and not just the disease.”

That’s what she sees in her work at Riley. Kids who are so resilient she never counts them out. But she doesn’t care just for the kids. She cares for the whole family.

“It’s not just a kid in the hospital. It’s a kid in intensive care, and they have such a loss of control, and you get to help them move past that. You form so many deep bonds and connections with families.”

Being at Riley and working with such a fragile population means taking the bad with the good, she said, and it’s the good that keeps her coming back.

She gets strength from her team, referring to it as a close-knit family. And she is proud of their strength in this latest battle.

“I’ve been so impressed with how everyone has adapted, how quickly we have worked to become prepared,” Freeman said. “Everything has been changing daily, if not hourly. Policies and how we’re doing things are changing constantly.”

But people are looking out for each other. When she was in an isolation room for an extended period of time, colleagues wrote on the window of the door, asking if she was OK, did she need to step out. Another nurse gave her an extra set of scrubs so she could change before going home.

Because of the pressure being put on adult hospitals within IU Health, Freeman understands that Riley nurses may be asked to help support their colleagues on the adult side.

“It’s definitely out of our comfort zone, but so is this virus, so everybody is out of their comfort zone right now. If that’s what’s needed to get through, we’re all in this together.” 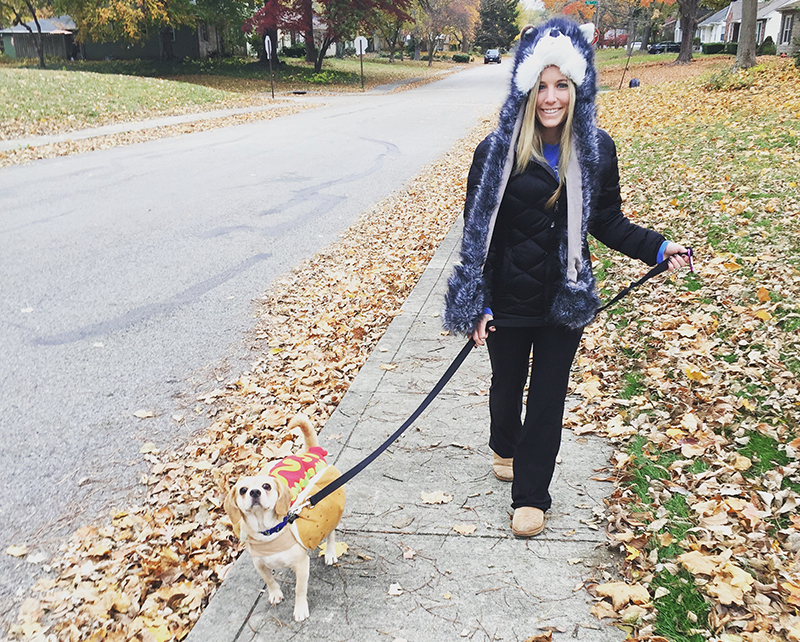 Freeman, who grew up in Muncie and went to Indiana University and IUPUI for nursing, lives with Reggie, her adorable puggle mutt. The canine companion loves to take walks, so he is likely getting his fill, thanks to the state’s stay-at-home mandate.

Reggie also loves to sit with Freeman while she gardens, something that helps her shake off the stress of the day. Getting back to digging in the dirt can’t come soon enough.

Her job in healthcare can weigh heavily on her sometimes, but she lives with hope. And she appreciates the outpouring of support from other areas of the hospital and the community during these difficult times.

“It’s so empowering to see those messages, to know that people care.”

And she reminds herself that better days are ahead.