The Spiegel Family: Why We Chose Riley for Our Daughter’s Care

Laura Spiegel’s daughter Emily was diagnosed with cystic fibrosis in 2013. “The disease wasn’t something that we were familiar with,” she says. So, the family headed to Riley Hospital for Children at IU Health for care. “We weren’t more than 5 minutes into our first conversation there when Dr. Davis sat down right across from me, took my hands in hers, looked me right in the eye and said ‘you need to know that your daughter is going to live a long and full life. And it’s my job and your job as her parent to enable that.’ And that moment was the tipping point for us.”

While challenges often arrive when we least expect them, some say it’s how to we cope that counts the most.

Laura Spiegel is one of these people.

Back in 2013, Spiegel’s infant daughter Emily was unexpectedly diagnosed with cystic fibrosis (CF), a genetic disease that predominantly affects the respiratory system. “When our pediatrician told us we were shocked. The disease wasn’t something that we were familiar with,” she says. “And learning about it and how it was going to affect our family shook us to the core.”

More than 30,000 people in the United States currently live with cystic fibrosis. Caused by a mutation of the gene CFTR, which controls the flow of salt and fluids in and out of cells, CF affects the production of mucus, sweat and digestive fluids. The disease causes these typically thin, slippery substances to take on a thick, glue-like consistency. This altered state can block the network of tubes and ducts throughout the body resulting in breathing difficulties and intestinal complications—as well as a shorter lifespan for many.

The current median life expectancy for people who have CF is just over 40 years old. It’s defined as the most common genetic disease in the United States for which there is not yet a cure.

“Learning of our daughter’s diagnosis was really hard for us,” recalls Spiegel. “Yes, there have been medical advances in CF and yes, there continue to be more, and yes, people used to have a much shorter lifespan. But, seeing the statistics was initially devastating. The reality was, we had a new daughter with chronic illness. But as a mother, I was struggling, thinking, ‘How do you wrap your mind around that? How do you stay hopeful?”

Spiegel’s strategy: focus on the day-to-day. Soon after Emily’s diagnosis the family headed to Riley Hospital for Children at IU Health for care. “That first day, we met with Dr. Stephanie Davis, our pediatric pulmonologist,” recalls Spiegel. “Emily was only 5 weeks old at the time and there I was crying in the parking garage before I even entered the building. I was overwhelmed.”

But, says Spiegel, that meeting changed everything.

“We weren’t more than 5 minutes into our conversation when Dr. Davis sat down right across from me, took my hands in hers, looked me right in the eye and said ‘you need to know that your daughter is going to live a long and full life. And it’s my job and your job as her parent to enable that.’ And that moment was the tipping point for us.”

From that point on, Spiegel felt that things were going to be okay.

“Dr. Davis’ words broke down some of my walls and allowed me to really hear everything I needed to.  All of the information I needed to know about her daily therapies, medications, meal plans, and so on.  Her statements would echo back to me later in the midst of some of the most trying times. They made all the difference in the world.”

Riley Hospital for Children is currently the only cystic fibrosis accredited hospital in the state. “What we appreciate about Riley is that you have clinicians that are truly experts,” Spiegel says. “That first meeting with Dr. Davis set the tone for our entire experience at Riley. We later learned that Dr. Davis is heavily involved in CF research and cutting edge studies. And beyond her, the entire Riley team consistently goes above and beyond.”

When she was younger, Emily had to head to Riley every month for monitoring checkups but now it’s down to quarterly visits where they check her lungs and monitor her growth, says Spiegel. 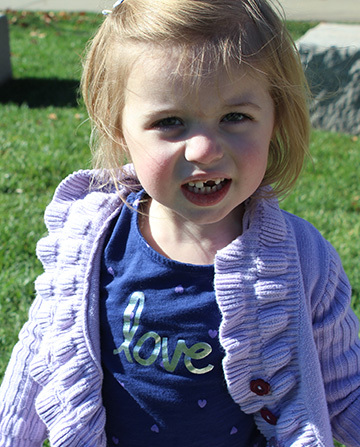 Today, Emily is a happy and curious 3 year old who attends preschool. “Initially, school was hard for us because we had a loss of control.  But we’ve partnered with her school to ensure she is happy and healthy there.  They give Emily her medicine and make sure the hand washing is top notch to avoid infection. Emily also has to avoid anyone with a respiratory infection whenever possible so that she doesn’t get sick.”

Still, Spiegel says staying positive about the long term realities of cystic fibrosis can be challenging. “We have to work to stay in a positive mind space and be realistic but hopeful.  It helps to find your norm.”

For Spiegel, it was about revamping her lifestyle. “I used to work 60 hours a week. A few years after Emily’s diagnosis, I took a hard look at my life and how I was spending my time,” she says. She decided to step away from her career for a few years to focus more on family time.  “Finding that sense of balance and perspective in our lives has been a big positive to come out of this.”

She also joined Riley’s Patient Family Advisory Council (PFAC), a committee comprised of past patients, their families and staff that advises the hospital.

Spiegel’s son Joseph, who is 6 years old, is also old enough now to understand his sister’s situation. For instance, she says, he picks up on the fact that Emily has to do respiratory therapy daily and he doesn’t have to do this.

“At first, it was heartbreaking because our son would meet someone else’s little sister and immediately ask, ‘Mommy, does she have CF, too?’ Helping him navigate through this has been an important part of our journey,” explains Spiegel.

“I tell him what I tell Emily and everyone else, that our family does special things to stay healthy. We don’t hide it or shy away from it,” she says.  “But we also try not to define our daughter by cystic fibrosis because she’s so much more than that.  She’s a bright and compassionate little girl, and she is truly a blessing.  So, we focus on what our norm is in the moment and we just live our lives.”