Dr. Alvaro Tori is a standout pediatric critical care doctor and an openly gay married father of two who fights for inclusion and diversity in medicine. He’s also one of the kindest men you’ll ever meet.

His smile. It’s the first thing you’ll notice when you meet Dr. Alvaro Tori. It sparkles and spreads across his face.

Yes. Even his eyes smile.

His colleagues at Riley Hospital for Children describe Dr. Tori, a physician in the pediatric intensive care unit, as compassionate, warm and a fighter for humanity.

His patients? Well, one time Dr. Tori was walking out of a grocery store when two parents started running toward him in the parking lot, screaming.

“Dr. Tori, Dr. Tori, you saved our child’s life. Because of you, we have a normal, happy child. We will never forget you, never forget what you did.”

They wrapped their arms around Dr. Tori in a hug. He’s never forgotten that moment.

He’s never forgotten it because, sometimes, that smile of his isn’t easy to come by. Dr. Tori’s job is to care for critically ill children, the sickest of children at Riley in intensive care.

And so even when things are tough and overwhelming. Even when he’s exhausted and hasn’t gotten to see his husband and two young children as much as he wants to -- he remembers those parents.

“This family, they had the potential of losing their child and their lives were never ever going to be the same,” said Dr. Tori, 43, as he sat in his office at Riley last week. “When you think you cannot handle anything anymore, you just remember that moment at the grocery store. It puts you back to the center and it reminds you just why you’re doing this.”

What Dr. Tori is doing, it’s hard sometimes to quantify it all. First, and foremost, he is a doctor.

Any given day, he might be working on protocols for respiratory care. He might be in a critically ill child’s room comforting her parents. He might be writing a budget to implement a practice that will increase diversity at the School of Medicine. 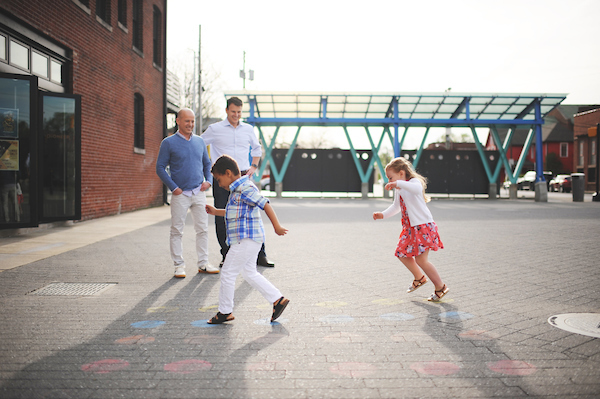 Diversity and inclusion are extremely important to Dr. Tori. He is an openly gay man, married to husband Toby Ringle. The couple has two children, 4-year-old Diego and 3-year-old Sophia. Dr. Tori wants a world where those two never feel discriminated against.

“I do my part at the office of diversity affairs to make sure everyone is treated equally,” Dr. Tori said. “To make sure everyone has the same opportunity regardless of gender, race, sexual orientation, ethnicity, presence of disabilities or where they come from.”

And so Dr. Tori wears many, many hats. But at a dinner party when a stranger asks him what he does?

“Pediatrician,” Dr. Tori says with a smile. In his heart, after all, that’s what he is.

It’s what he always wanted to be.

He was barely 4 years old when he made up his mind. He would be a pediatrician.

Dr. Tori got a taste of the career early, born and raised in Lima, Peru. His father was a doctor, a neonatologist and a general pediatrician.

“Since I was a kid, I always heard him talking on the phone with patients, giving recommendations,” Dr. Tori said. “And I thought ‘Oh. That is cool. How amazing that he can just cure people, you know?’”

On the weekends, when his dad would take him to tennis lessons, they often would stop at the hospital to do quick rounds, so his father could see patients.

“I always just found that fascinating,” Dr. Tori said. “I always saw how much patients, patients’ parents just loved him. I always just felt like I wanted to do good in that kind of way. So, I always knew I wanted to be a physician and a pediatrician. There was not another option. No plan B.”

Dr. Tori didn’t veer off that path. He finished medical school in Peru, but wanted to go someplace different for his pediatric specialty.

One of them was Riley. And something special happened when he got there. He met fantastic people. He felt at peace and comfort.

“The day that I crossed the doorway at Riley I felt that peace,” Dr. Tori said. “The energy that I felt was different. The people that I met were different.”

And as Dr. Tori started his residency at Riley in 2003 and went on to become chief resident and then was hired, he stood out.

His compassion. His kindness. And his smile. They all stood out.

The awards started coming for Dr. Tori. He won his first Red Shoes Award as a senior resident, an award he was nominated for by a family for outstanding care.

He received the award on a stage with a video of his family back in Peru congratulating him. He cried.

Love, on all levels, is something so important to Dr. Tori. It has rounded out his career, having a person in his life that he loves.

He found that love at Riley, when a fellow resident introduced him to Ringle. They went to the movies.

Dr. Tori asked Ringle out for another date, for coffee to help him write his personal statement for chief resident.

“We stayed for a couple of hours and talked,” he said. “Since then, we have been together.” 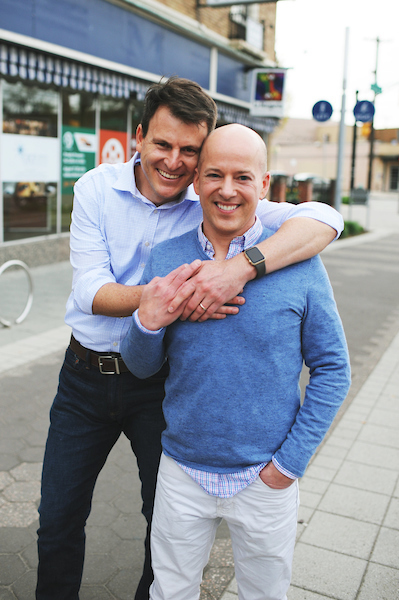 That was 13 years ago. In 2012, they went to Portsmouth, New Hampshire, to get married. Their son, Diego, was on the way and they both came from traditional families. They thought they should be married before having a son.

A year later, Sophia was born. Both children are adopted and share the middle name Ringle and last name Tori. They are best friends. They “melt my heart,” Dr. Tori said.

And they have changed the way he practices.

“I take things more personal. I find myself spending more time with parents. I know how it would feel to lose a child,” he said. “In some of the cases, especially when patients are close to their age, it hits part of my heart.”

As for his son Diego, he’s the same age Dr. Tori was when he figured out he would be a pediatrician.

When people ask Diego what he wants to be when he grows up, he says a doctor. Just like his dad. The dad he watches go to work each day to care for his patients. With that infectious smile.

For young doctors: “Find a good mentor who can help you walk through this wonderful but difficult journey. You need advice. And you need advice from someone who has done it already.”

How to get through the tough times: “Have family, friends and find someone who can be your support system, because going through medical school, going through residency and being a faculty is tough. You have wonderful days, but you will have tough days. One day you will feel in heaven and one day you will feel like you cannot do this anymore and those are the times when you will have to rely on people you trust and on people who will lift you up.”