Three months early, weighing less than two pounds, Aaron Fleming’s chance of survival was 10 percent. He might not have made it back in 1980 – had he not been born at Riley Hospital for Children. Not only did he make it, he turned into a fascinating man.

People used to come up to that cute little boy with glasses, the little guy with that ornery look on his face.

“What do you want to be when you grow up?” they would ask him.

Aaron Fleming, barely old enough to be in school, would spell it. Then, he would explain to those people exactly what paleontologists do, how they study the history of life on Earth as reflected in the fossil record. 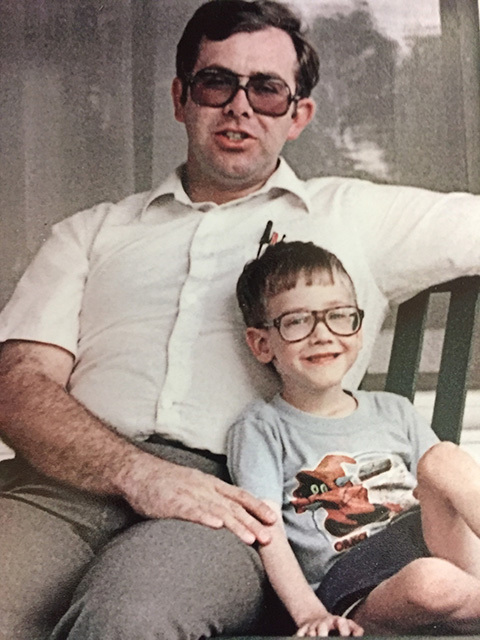 “He really surprised people,” said Aaron’s dad, John Fleming, a retired pastor. “It kind of took them back a little bit. They didn’t expect that.”

Aaron Fleming has never been what people expected. He’s different; Aaron admits that. His personality is quirky. His IQ is off the charts. He writes and recites poetry and fiction. He tells stories in such detail that it feels as if you are right there in the place he is describing.

He even burst into this world in atypical fashion – three months early, weighing 1 pound, 15 ounces. That was 1980. His chances of survival were slim -- 10 percent, at best.

Aaron might not have made it back then, nearly four decades ago – had he not been born at Riley Hospital for Children at IU Health.

And last week, 36 years later, he was back at Riley. He sat at a table in the Simon Family Tower. He sat there with his dad, surrounded by the three doctors who were there when it all began.

William Engle, M.D., now a neonatologist, was a first-year resident at Riley in 1980. James Lemons, M.D., and Richard Schreiner, M.D.,  were both neonatologists in the newborn intensive care unit at the time.

It’s rare to have a patient come back and visit so many years later, the doctors told the Flemings. They were thrilled to be there, listening to Aaron tell his story. 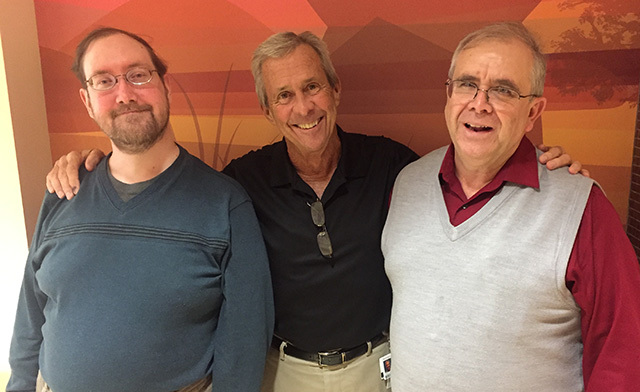 “My father would have sure liked to have you as a son,” Dr. Schreiner jokes, pointing out Aaron’s love of poetry and how his own dad was an aspiring poet.

The word genius is thrown around. Aaron most certainly falls into that category.

Much of his life is spent writing and creating. He also likes to immerse himself in poetry. As he sat at Riley, he broke into a recitation of Robert Frost’s “Fire and Ice.”

“Some say the world will end in fire,
Some say in ice.
From what I’ve tasted of desire
I hold with those who favor fire.
But if it had to perish twice,
I think I know enough of hate
To say that for destruction ice
Is also great
And would suffice”

One morning, at 3 a.m., Aaron couldn’t sleep. So, he wrote a poem from the point of view of a pumpkin, getting ready to be carved.

“It starts out in a skippy, happy tone with the pumpkin saying, ‘The carver is coming. What face will I wear? Will he carve my face this way or that way? Will I glow with light like a holy sacrament?’” Aaron says.

It ends much darker, with the jack-o-lantern feeling empty, all his seeds gone, “thinking of the possibility of lives that could have been,” Aaron says.

Still, he’s had some trouble finding work. Hiring managers have told him he “knows too much” to work there.  He’s too smart.

Aaron said he often feels anxious and keeps to himself, communicating with others mostly by computers.

His dad wondered if that was due to Aaron being born prematurely. He started thinking about that and then he remembered Dr. Lemons’ name from all those years ago.

So, he called up that man who took care of his tiny son at Riley. 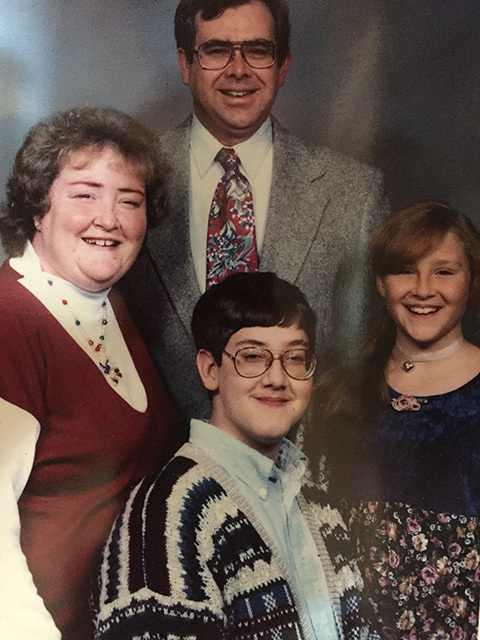 That’s how John and Aaron ended up back at Riley. Dr. Lemons invited them to talk. After meeting with Dr. Engle and Dr. Schreiner, Dr. Lemons took the two on a tour of the neonatal intensive care unit.

John reflected on those three months Aaron was in the hospital.

“It was scary,” John said, to look at his son lying there hooked up to machines, wondering if he would make it.

John and Aaron’s late mother, Deb, who died two years ago from complications of diabetes, would drive every evening after work from their home in Sulphur Springs, Ind., to be with Aaron.

As the weeks passed, Aaron grew and eventually got off the ventilator. By August, he was ready to go home.

Aaron suffered few lasting physical effects from his prematurity. He is nearsighted with astigmatism. And he wears hearing aids.

Whether his anxiety and introversion is due to his premature birth is a mystery. There haven’t been studies done measuring such effects in preemies, Dr. Lemons said.

Even from a very young age, Aaron said, he remembers having deep thoughts. He remembers sitting in his room, as a little boy, pondering big life questions.

“Where do we come from? Why are we here? The difficult questions in philosophy I would reflect on them,” Aaron said. “So, I had a very rich mental interior life.”

And as an adult, he still ponders the larger questions of life.

“We experience things in life that are random,” he said. “Like you don’t know whether you are going to be born prematurely or not. We take those elements, those experience and we weave them together into what we call our own identity and lives.”

As he stands just outside the NICU where dozens of tiny newborns are fighting for their lives, he looks at Dr. Lemons and thinks about those odds – 10 percent chance of survival.

He most certainly is.